Flower Flat Cafe or Pixies in the Garden 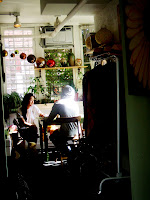 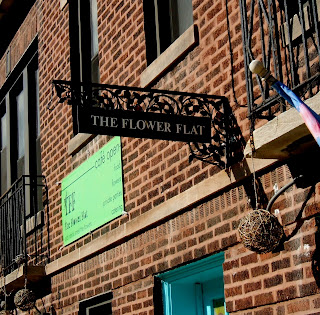 Ah gardening, the traditional English pastime.  There is nothing Brandy enjoys more (other than the possible exception of brunch...or a nice glass of Riesling) than tending to the plants in her garden; Elderberry bushes, climbing grape and blackberry vines, peace trees, lavender, basil, and her prised Tudor roses.  Brandy has no choice but to garden, for as a great man once said, once an English man or woman turns 40, a trowel somehow appears in their hands. 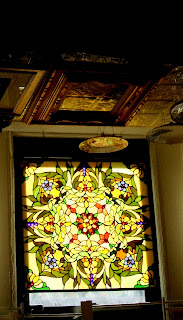 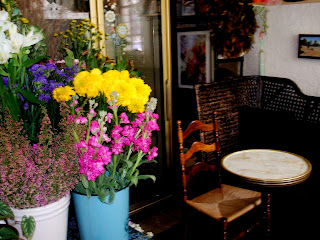 Although she does love the cold weather, Brandy is sad every autumn when she finally has to put away her gardening tools until the following spring.  Perhaps it was this longing for her beloved flowers and fruits that lead Brandy to the Flower Flat Cafe, a  cozy little hole in the wall in East Lakeview.  Upon entering, one is greeted by the sight and smell of fresh cut flowers, ready to be placed into a mixed bouquet.  Colors flow into the small two room cafe from several stained glass window hangings, casting a friendly brightness onto everything.  The tables are small and intimate, but whimsically eclectic.  Walls are lined with adorable touches that really do make one feel as though they are in a magical garden, like gazing globes and picture frames on the ceiling.  Brandy felt as though she had stepped into someone's home for a meal, especially when her waiter collected her silver ware from a hutch in the corner. 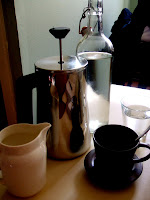 The menu warns straight off that one chef + a small kitchen means a little bit of waiting for food, so Brandy ordered some coffee, which came in a french press for pouring at one's own pleasure, which Brandy very much appreciated.  It was a little bit disappointing to not see some more creative beverages on offer, but sometimes a really good cup of coffee or a nice selection of teas makes up for anything. Brandy started off with the Everything Nice Waffle, a spiced waffle served with fresh seasonal fruit.  The waffle was the perfect size (not the monsters that Belgian Waffles often are) and was nicely caramelized on the outside and fluffy on the inside.  Brandy was a left longing for a bit more of the "spice" flavor, but there did seem to be a subtle malted flavor she very much enjoyed.  The fruit on top was a pleasant mix of strawberries, raspberries, and sliced pear, which really did lend a nice end of summer feeling to the dish. 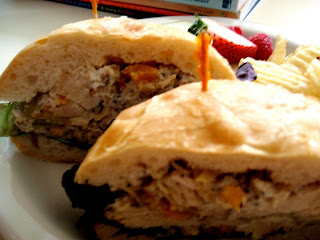 For her savory, Brandy chose the Chicken Salad Sandwich, which came with more pears and berries, as well as some potato chips.  The chicken salad was nicely chuncked and tender.  The dressing, which was an herbed mayonnaise, blended well with the sweetness of the dried apricots and sliced red grapes, and halved almonds lent a nice crunch.  The bread was pleasantly soft (Brandy hates the use of crusty bread for sandwiches) and buttery.

The cafe had less than ten tables in all, but everyone seemed to know each other (indeed, the chef/owner herself stepped out of the kitchen for a while to socialize and seemed to know the name of every person sitting in the place) and while Brandy expected a wait for food, her dishes had been delivered almost instantly.  So although she won't be able to putter in her own garden for the next few months, Brandy can visit the Flower Flat Cafe for a dose of cozy comfort any time she likes. 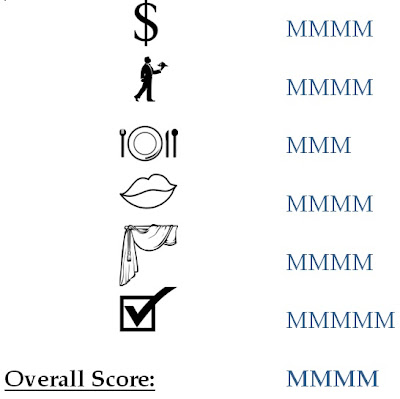