The Red Canary or Life Inside the Guilded Cage 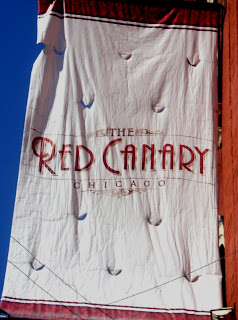 "Carb Loading Friday," as the Friday before the Chicago Marathon is known, has always been a joyous day for Brandy.  Often she will go out to an Italian restaurant of some sort and watch all of the well toned athletes gobbling down plates of pasta (probably their only taste of pasta for an entire year) without abandon.  Once, she even witnessed a particularly thin young woman place an entire serving of spaghetti in between two pieces of bread and eat the thing as a sandwich.  Brandy has always been more than happy to join in with these sorts of festivities, however, it doesn't seem to have ever occurred to her to run the marathon afterwards. 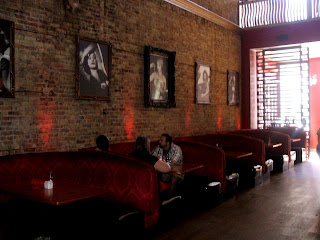 It was during this year's "carb loading" that Brandy met a lovely young woman named Barbie Q. Brass, a breeder of British bull dogs from Boston who was in town to run the marathon dressed as one of her pups to raise awareness for so called "Bully" dogs, or in other words, breeds of dog who seem to have obtained bad reputations.  Brandy was so taken with her cause that she decided to invite Barbie to join her for brunch before the big run, to which Barbie responded, "Wicked!" and Brandy took to mean "yes." 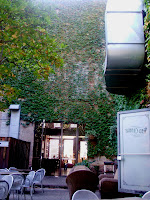 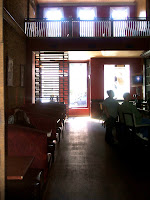 The two were joined by Brandy's old friend, Birdie Brown at The Red Canary, a so called gastro-lounge in the River West neighborhood.  Brandy very much appreciated the aesthetic of the inside of Red Canary, which was done in a sort of Gothic vintage with a huge and impressive chandelier, rounded red clothed cushy booths, a mirror backed bar, and photographs of beautiful women made to look like the silver screen sirens of old (in fact Birdie claimed to have met all of the women on display at a USO show in Berlin.  Brandy seemed to doubt this).  As the weather was so lovely, the trio forwent the gorgeous interior and chose seats on the patio, which was equally as beautiful.  Surrounded by ivy covered walls and encasing some lovely trees and flowers, the spacious patio held more than enough tables, chairs, and even a few lounge areas from which to choose.

After settling in, a few cocktails were ordered; traditional mimosas and bloody Mary's were the only things on offer, which Brandy found surprising, as the title of "gastro-louge" surely implied not only gourmet food, but luxurious and exotic cocktails.  The reason for the short list might have been under staffing, as the lovely hostess seemed to be not only seating parties, but also taking all the tables' orders and mixing the drinks behind the bar, while food runners from the kitchen delivered everyone's meals.  In fact, the food took quite a while to finally reach Our Lady and friends' table, which was surprising, as there was not exactly the largest of crowds. 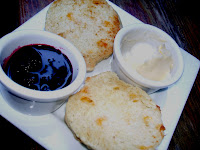 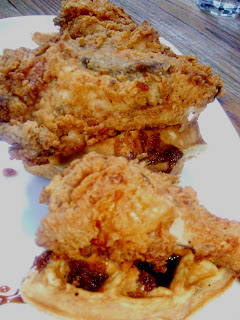 Once the food finally did arrive, everyone was more than pleased.  Barbie had ordered the Chicken and Waffles with a Cheddar Biscuit on the side.  The chicken, which came in three huge chunks, was mouth watering tender, with a crisp yet light breading, almost like a tempura.  The waffles, which Barbie fund to be just the right consistency, were really only there to serve as vehicles for the delectable bourbon vanilla syrup that came with the dish (the syrup was so desirable that Birdie ended up putting it in his coffee).  The biscuit came served with a lovely jam an some amber honey, which Barbie found particularly "Killa."  Brandy assumed this meant "good." 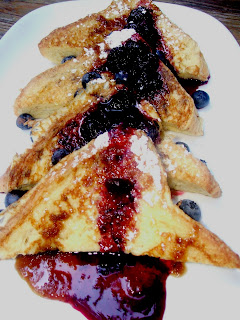 Birdie went the sweet route with some French Toast, which also came with the miracle syrup and blackberry compote.  Birdie said the dish could have used a little more of the molasses like syrup, though Brandy supposed if he had been brought another side of it, he might have just drunk it straight from the ramekin.  The blackberry compote was bright and fresh, helping to pick up the toast, which Birdie felt was bordering on being dry.  "It's not as eggy as I would like," he said between sips of his syrup-laden coffee, "I preferred my French Toast to be slapping me in the face with egg, just like a real Frenchman," 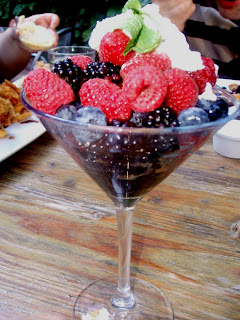 Brandy's choice was the Canary Benedict, with a dish called the Mixed Berry Martini on the side.  The Martini, which despite its name was not a drink, was presented in a martini glass and consisted of a jumble of raspberries, blueberries, and blackberries which had been mixed with a sort of lavender-tasting syrup and topped with some vanilla whipped cream and a sprig of mint.  While the berries were beautifully sweet, fresh, and bright, Brandy couldn't help thinking that $7 for such a dish was a little steep.  The Canary Benedict, the house twist on the old favorite, was made with slices of steak in place of the Canadian bacon and a Cheddar Biscuit instead of the English Muffin.  While the steak looked slightly over cooked (or perhaps had been sitting under a heating lamp too long?), it was still perfectly tender.  The poached eggs poured their yolk over the biscuits, mixing with the sort of goopey and tangy herbed hollendais sauce.  The biscuit was the true standout, being tender, light, and surprisingly sweet.  The side potatoes were also a great surprise, being soft and perfectly spiced while being served up with peppers and onions for color and extra flavor. 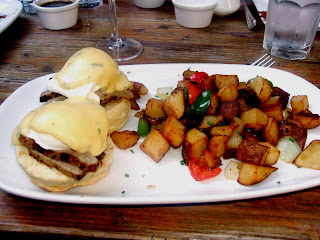 While some dishes on the menu did seem a little over priced, the final bill was definitely not an eye popper.  After wishing Barbie good luck on her run ("How in bloody hell she's going to win that thing with three waffles, fried chicken, and a biscuit down her gullet while dressed like a bull dog is beyond me," Brandy said) Birdie and Brandy headed to their respective homes to cheer on the more athletic from the comfort of a recliner. 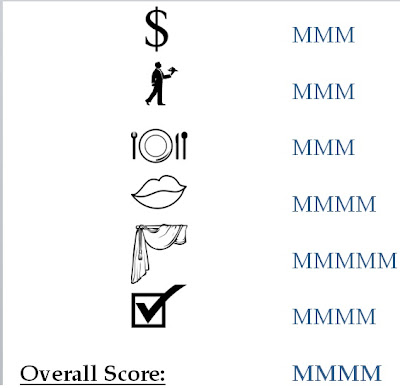