Blokes and Birds or A Foggy Day in London Town 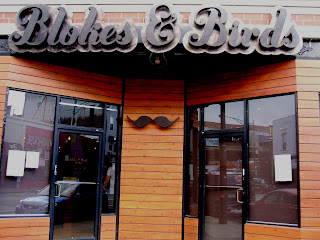 It seems the British have become fashionable once again.  From the Beckhams to the British monarchs to that lovely gentleman who plays Dr. Gregory House (whom Brandy oddly claims was once her dog walker), one cannot avoid the latest infestation of the British into the United States of America.  Even right here in Chicago, there has been no shortage of British themed gastro-pubs popping up all around the landscape.  One of the latest to hit the scene is Blokes and Birds, an establishment with as much emphasis on its gourmet menu as on its extensive beer list. 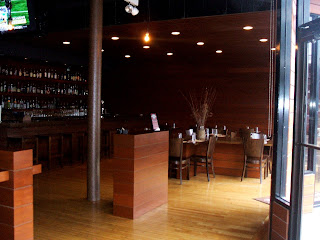 Brandy reunited with old friend Biscuit Brown to sample these oh so fashionable and gourmet British offerings.  The interior of the gastro-pub was covered in interestingly slatted wood panels, but other than that was rather stark and unremarkable.  The tables were nicely spaced, with seating for every taste: booths, tables, and stools.  With no wait for a table, the duo took their seats and ordered drinks.  The usual selection of brunch cocktails was on offer, so Brandy chose the classic mimosa, while Biscuit picked the Bloody Mary.  The cocktails turned out to be rather impressive, with the Bloody Mary being served with all manner of snacks on a stick, and the mimosa presented with some berries, chopped pineapple, and a spring of mint, giving the drink more the look of a glass of Sangria. 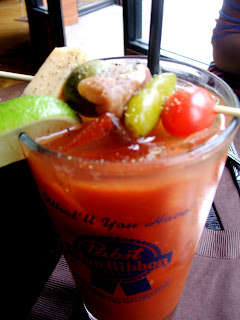 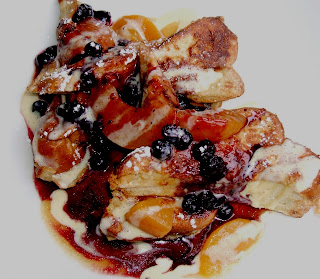 To share, the ladies picked the day's special French Toast, which came served with peach and blueberry compote.  Though the corners and edges of the toast were very dry, the middle was nicely moist and soft, and the fruit added a lovely brightness.

Biscuit chose the Duck Hash, a hearty plate with potatoes, bell peppers, shredded duck meat, and two fried eggs.  The duck meat proved a little disappointing, being dry and unremarkable, in that any other meat really would have sufficed in the dish, but the peppers lent a very nice flavor and the potatoes were brilliantly creamy.  The meal also came with a very lovely and colorful little fruit cup to help cut the richness of the duck fat. 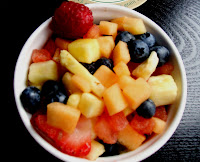 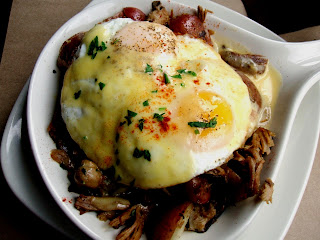 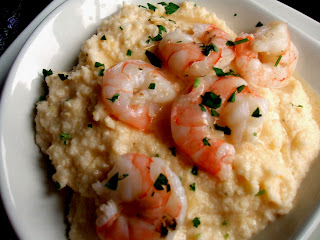 Brandy picked the rather un-English dish of Shrimp and Grits.  The grits were wonderfully cheesy, soft, and light in texture.  Biscuit, as a true Southern, thought the grits were a little undercooked, but Brandy rather liked the bit of texture in them.  The shrimp, though perfectly cooked, were sadly under seasoned and flavorless.  Brandy wished for a bit of garlic butter or lemon juice at the very least.

A bit on the pricey side (two drinks for each lady and three entrees came out to be about $80) and not all authentically English, Blokes and Birds did fulfill the promise of gourmet offerings along side interesting drinks.  Brandy has already reserved herself a bar stool for the next World Cup, when she will be sampling as many of their beers as possible, only stopping when her hand held Union Jack flag droops below sea level. 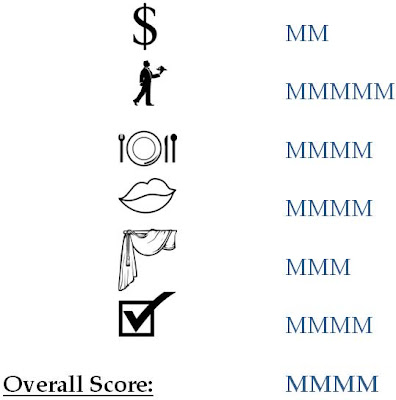 Posted by Bunny and Brandy at 6:41 AM