Bananas Foster Cafe or Back Where It All Began 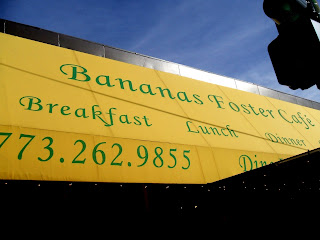 Where were you a year ago, dear readers?  Were you doing some early Christmas shopping?  Maybe you were putting together the perfect Halloween costume?  Or perhaps, you had just stumbled upon a blog about two friends going to brunch in Chicago.  That's right lovelies, this is the one year anniversary of Bunny and Brandy's Brunchtime Blog! 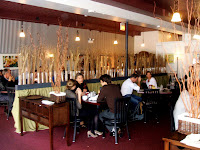 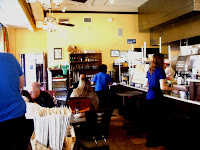 Missing Bunny especially on this day, Brandy asked Biscuit Brown to join her at the Bananas Foster Cafe (getting the idea from the wonderful cover article in November's Chicago Magazine which Brandy was sadly not consulted on), an eclectic bistro in Edgewater, which coincidentally stands next door to Bunny and Brandy's first ever post subject, M. Henrietta.  Arriving a little later than usual (Brandy likes to brunch promptly at 11:30, but a mistranslation of the address from the restaurant's website lead Brandy and Biscuit on a bit of an adventure, finally arriving at BFC around 1:00pm).  A fifteen minute wait allowed a little bit of exploration into the space.  The back room, which seemed to be more of a dining room, was laid with soft curtains and housed a chic banquet sporting willow branches at its top.  The front room and entrance to the establishment seemed more cafe like, with smaller tables pushed next to windows to allow room for the small open kitchen, which was at the room's center.  It was at one of these tables (one which was particularly drafty and hard to get into) where Brandy and Biscuit were finally shown to their seats.

A massive menu listing choices from the very British, to the classically French, to Southwestern twists was presented to the pair.  Some warm drinks were ordered (a thick and rich white mocha for Biscuit and a creamy and dense Chai for Brandy) to sip on while navigating across all the choices, which included a breakfast buffet for $12.95 a person.  Brandy was surprised that the pressure of both keeping a buffet stocked and filing orders for such a diverse menu was put on such a tiny kitchen.  That pressure did present itself in a long wait for food. 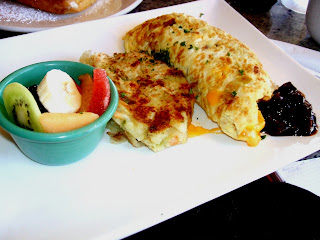 Brandy decided to try something more adventurous than the buffet and ordered the Ploughman's Omelet, a very English combo of green apples, cheddar, and bacon with some straight from the UK brown sauce relish.  The dish also came with two sides, so Brandy chose Bubble and Squeak and a fruit cup.  The omelet was flavorful with the smokey bacon and the tart apples mixing nicely, but it really livened up with the addition of the vinegary brown sauce, taking the dish from delicious but traditional to a real winner.  The fruit cup had a nice variety of pieces, including orange, banana, and grapefruit as well as the usual bit of melon, berries, and grapes.  The bubble and squeak (a combination of mashed brussell sprouts, potatoes, peas, and other veggies for you non-Brits) was a lovely change of pace from regular breakfast potatoes.  The absolute Britishness of the plate seemed to bring a tear to Brandy's eye, though she insisted it was just a waft of chopped onions from the kitchen. 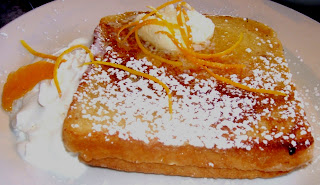 Brandy also decided to indulge her sweet tooth with some Orange and Cream Cheese Stuffed French Toast, which came lovingly presented with some whipped cream and orange zest.  The toast was very tender, though not soggy, and the filling had the perfect level of sweetness.  Though the flavor combination is certainly one that Brandy had seen before, it certainly made for a very unusual and tasty bit of French Toast. 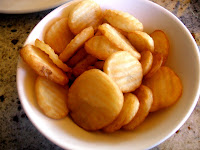 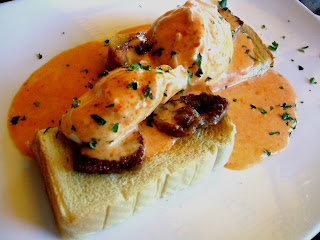 Biscuit chose the Cowboy Benedict, one of BFC's many twisted versions of Our Dear Bunny's favorite dish.  This came served on Texas Toast instead of English Muffins ("It's like regular toast, but bigger, because they like things bigger in Texas, you see?" Biscuit tried to explain to Brandy, who just shook her head while mumbling something about fixings things that aren't broken) with skirt steak taking the place of bacon and a red pepper hollendais.  Biscuit also ordered some Home Fries, as her dish did not come with any sides.  The first thing Biscuit noticed about her chosen breakfast was that the portion was rather small for being supposedly "Texas Sized."  Not only that, but the three tiny medallions of steak on her plate hardly warranted the $10.50 price tag, especially since it didn't come with a side dish (for reference, Brandy's omelet was $9.50 and came with 2 sides).  Regardless of size, the non-traditional Benedict did serve up plenty of flavor, thanks to the red pepper hollendais, which was nicely bright and rich.  The toast did go a bit soggy though, but Biscuit cheerfully used her home fries (cut into rounds and fried to a nice crisp, Brandy originally thought they were pickle chips) to lap up the sauce.

With good, though maybe slightly over priced food in their stomachs, Brandy and Biscuit headed for home.  As she passed the buzzing place next door, Brandy caught a glimpse of the table she and Bunny had shared when they first started their adventure a year ago.  She flashed upon all the waffles and pancakes, all the French Toast and fried dough, all the eggs, all the potatoes, and of course all the Benedicts and she thought about what a rich and wonderful year this has been.  Brandy thought of how lucky she has been to spend time with all her friends like Our Dear Bunny, Biscuit and Birdie Brown, Barry and Blanche Black, Bailey Blue, Mama Bee, and all the others, and how many people she's been privileged to meet through her adventures.  And so let us all raise our mimosas in toast to Brandy's adventures booth past and future.  Here's to Brunch! 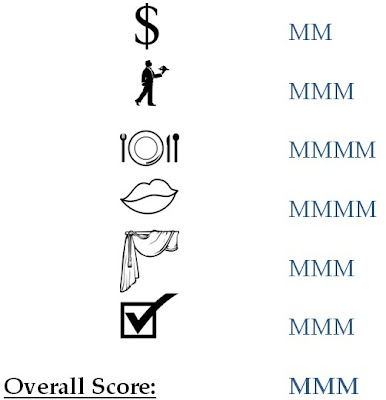 Posted by Bunny and Brandy at 6:40 AM