There's not too much Bunny and Brandy expect when going to brunch.  A nice variety of menu choices, a cheerful staff, and a comfortable place to sit is all that can make a morning fantastic.  But since Our Ladies had their affluent friend, millionaire Barry Black, with them this week, they were hoping to impress.  "Nonsense, I don't want you to make any fuss for me," Barry tutted, "I want to slum it for once, so to speak."  Unfortunately, Barry's idea of "slumming it" is eating caviar without creme freche.  Still, Our Ladies had high hopes for the Uptowner Cafe, having heard buzz about town that this was the place to go for a good breakfast at a low, low price. 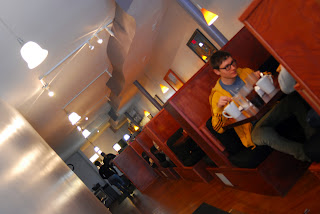 The interior of the Uptowner did not bode well.  Most of the restaurant is dark and windowless, with the fact that the walls are painted a dreary grey not helping to liven the atmosphere.  But local art on the walls helps to add some color and the warm wooden booths that line the walls are a step in the right direction, even if the cushions are un-attached and tend to shift under the movements of a fidgety eater like Brandy.  The menu seemed to offer up the average in terms of breakfast choices; eggs, bacon, cheese, potatoes, and the various combinations of said ingredients.  Barry decided on the simplest of breakfasts (eggs, hash browns, bacon, and pancakes) in order to blend in with what he referred to as the "Natives."  Brandy opted for the Farmer's Breakfast, a combo of scrambled eggs with hash brown, covered in cheese and onions, with a side of ciabatta french toast.  Bunny gravitated more towards the lunch side of the menu and ordered a Reuben Sandwich with a cup of Chicken and Wild Rice soup.

While the two waitresses serving Our Ladies and guest were very polite and friendly, they did seem to forget about them for quite a while, also forgetting to bring silverware, fill water glasses, and even forgetting part of Barry's breakfast when the food was finally delivered.  Barry took all this in stride, saying "This is good service compared to some 5 star restaurants I could name!" 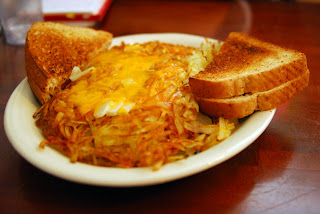 Brandy's breakfast was just as rustic as its name would imply.  The hash browns were nicely shredded and crunchy, but very greasy, leaving behind quite the oil slick on the plate.  The French Toast was bland and dry to say the least.  A tasty and filling breakfast, yes, but nothing special. 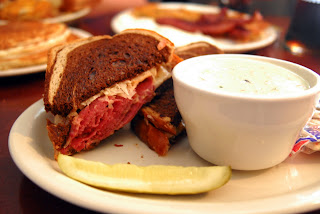 Brandy's Reuben was reportedly nice and melty, with a generous portion of sauerkraut.  The corned beef was also nice and not too fatty, but the whole sandwich was a bit greasy as well, and the soup was rather bland.
Poor Barry Black, whose digestion can only handle food served from a mother of pearl spoon, wasn't able to eat much of his breakfast, but from the look of it, it could have fed the entire table by itself.  The pancakes were massive, the bacon thickly cut, and the eggs well cooked. 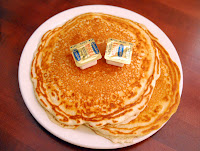 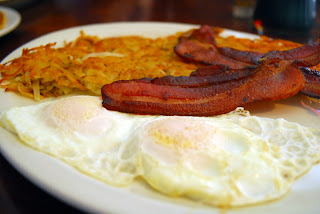 The Uptowner Cafe leaves much to be desired, both in atmosphere, service, and actual food.  Middle of the road all the way, and just about average in terms of price (most dishes range from $7 to $9, which is a bit pricey for eggs and potatoes).  Barry Black could not have been more pleased with his "rustic" brunch, but Our Ladies know they could have done better.
The Short and Sweet Review: 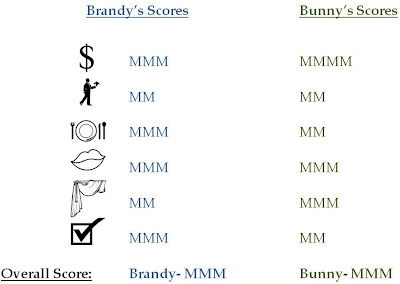