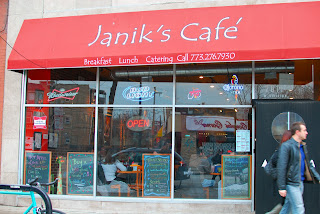 Bunny and Brandy have encountered many strange things during their journeys through Brunchland; men in women's clothing, blob monsters, and even a donut with bacon on it, but during this week's brunch at Janik's Cafe in Ukrainian Village, Our Ladies encountered a new species of being known as "Hipsters."  Apparently, the Hipster is a sort of young person who, to paraphrase Oscar Wilde, does nothing and knows everything.  They are often spotted wearing thick black framed glasses (whether they are prescribed or not), striped long sleeved shirts under "retro" style screen printed T-shirts sporting names and logos of bands no one has ever heard of, long scarves wrapped thickly around their necks, skin tight trousers, and sporting bushy beards (in the case of the males) and long hair parted in the middle and haphazardly styled (could apply both to the males and females). 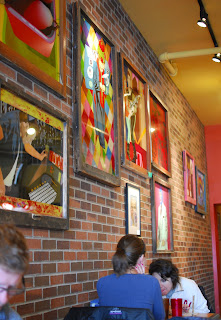 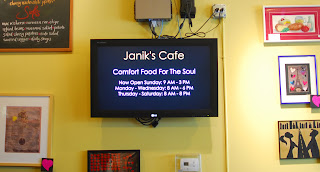 Upon entering Janik's Cafe, one is greeted by colorful local art, handwritten signs proclaiming the day's specials, all the free newspapers one could eat, and lots of small tables spaced throughout the room.  One will also be greeted by the dull eyed stares of a dozen or so Hipsters.  Bunny was quite alarmed by this reaction, but Brandy assured her they meant no harm.  "I read an article in National Georgraphic about these types," Brandy whispered, "I think they're appreciating us ironically."  "Impossible," Bunny scoffed, "They're Americans.  They don't know what irony is."  Our Ladies then made their way to the counter to place their orders.  For Bunny, a Mixed Berry Smoothie and a Tuna Melt Sandwich with a side of macaroni salad.  For Brandy, a Pineapple Smoothie and a Crab Cake Sandwich, accompanied by a bowl of Cheesey Potato Soup.  They were given a table number and told their food would be brought out to them in a trice. 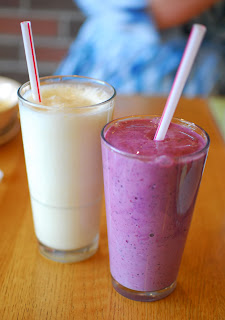 Our Ladies tried to ignore the continuing stares of the Hipsters by studying the menus along the walls.  All too late, Brandy discovered the sign about $5 cocktails, including bloody mary's, jack and cokes, and mimosas.  After about 10 minutes, the dishes started arriving.  First, the smoothies, thick and delicious.  Bunny's Berry Smoothie was a bit more flavorful, as Brandy's only tasted a little of pineapple and a lot of cream.  "More of a milkshake than a smoothie, really," Brandy said, "That'll teach me to try and be healthy.  Next time, I'm asking for a Jack and Coke smoothie." 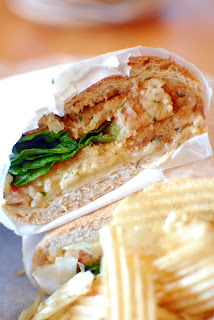 Brandy's Potato Soup proved to be much better than expected.  Loaded with perfectly cooked chunks of potato, and laden with delicious cheesy goodness, the soup was surprisingly fresh and satisfying on such a dreary Chicago morn.  The sandwich, on the other hand, was a little disappointing.  The crab cake was in drastic need of crunchiness.  The interior was good on flavor, but just too mushy for Brandy's liking.  She did, however, appreciate that the sandwich was completely customizable, from the bread and cheese to the toppings.  The tartar sauce the lady at the counter had suggested for the sandwich was definitely needed, as without it, the crab cake would have been even more bland. 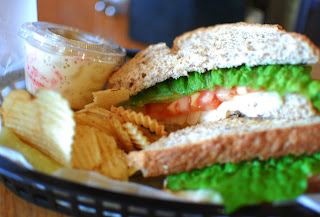 Bunny's sandwich, the Tuna Melt, was more of a Tuna Warm.  The tuna salad itself was very good, but the cheese was definitely not melted, nor was the sandwich very warm at all.  The macaroni salad, however, was quite tasty.  Bunny explained that it wasn't too vinegary, a huge pet peeve of hers when it comes to macaroni salad.

At the end of the day, Janik's Cafe provides one with lots of comforting food for a very low price (most dishes don't even graze $10).  If one is able to endure the side glances of the dozen or so Hipsters circling around the condiment caddies, a quick, cheap, and filling brunch is to be found.  Tip from Bunny and Brandy, if the Hipsters are getting too close for comfort, tell them you used to be in a very obscure band they wouldn't have heard of and they will wander off to look up your band's album on Amazon Marketplace using their iPhones (ironically, of course). 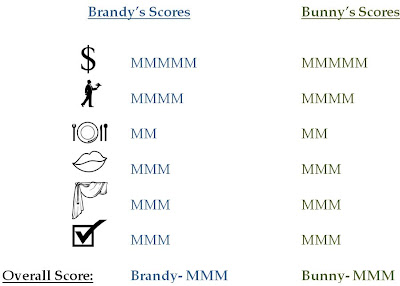