Angelina Ristorante or Luck of the Italians

Americans have this strange relationship with St. Patrick's Day which baffles Bunny and Brandy.  Back home in jolly old England, St. Patrick's Day is just a day where one goes to the pub and has a pint (that's pretty much every day in England, though).  But here in America, it is apparently legally required that the entire population drink to the point of sickness, dye everything green from their hair to the rivers, and insist on celebrating their Irish "heritage" (which in most people seems to amount to a second cousin who once visited Dublin while back packing across Europe) by asking random strangers to kiss them.  Our Ladies thought they could avoid some of these strange rituals by going to Angelina Ristorante, an Italian restaurant, for brunch this week, but sadly the Irish had even invaded that corner of the world. 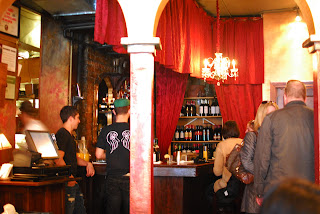 Angelina's interior mixes old world charm with modern day sophistication.  Rare, signed, and ancient wine bottles line the walls just under several retro style black and white photographs of people eating in various joyous and absurd ways.  The room was awefully loud, which wasn't helped by blaring music that was forcing people to shout over each other in order to have a conversation.  A lovely bar was set into the back corner of the room, hung with dramatic curtains to enhance its intimacy.  Upon entering, Our Ladies were greeted by tables of glassy-eyed hung over youths, adorned in green plastic beads.  "Surprised they managed to get up this morning to go to brunch even," Bunny huffed when they were informed it would be a little bit of a wait for a table.  "My dear Bunny, these children never went to sleep.  They came straight from some 6:00 am bar, no doubt," Brandy chuckled.  She found the competitive nature of American drinking habits rather amusing. 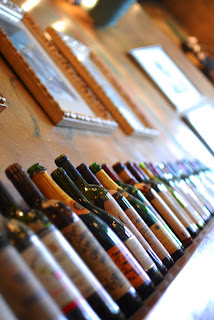 After about ten minutes of standing in the doorway, a table literally appeared (after a very kind server brought it out from some dark corner) and Our Ladies were sat.  Unfortunately, as this was a make shift space, Brandy's chair intruded into the middle isle of the restaurant, and any time a server, patron, or otherwise decided they needed to pass, Brandy would get jostled.

Upon glancing at the menu, Our Ladies discovered brunch to be Cash Only, which hadn't been indicated anywhere else.  "Would have been nice to have a warning at least!" Bunny squeaked.  Drinks were very reasonably priced (such as $5 for a mimosa or Belini, or $9 for a Bloody Mary with a beer back) and there was also the option of having one brunch entree and unlimited mimosas for a flat $21, which seemed reasonable.  Bunny opted for a single mimosa, while Brandy (for once) chose not to drink an alcoholic beverage in protest of the St. Patrick's crowd and ordered an iced tea.  For Brandy's entree, she chose a breakfast sandwich, made with smoked mozzarella, Canadian bacon, and scrambled eggs on a croissant.  Bunny went with her old stand by, the Benedict, choosing the Florentine option from the three on the menu.  After ordering, Brandy made a quick dash to the next door Jewel for some cash and gum.

Bunny's mimosa arrived in a lovely tall glass and was more than a bargain at $5.  She reported that it was well balanced with not too much of one or the other ingredient.  Brandy's iced tea (which was a surprisingly expensive $4.50, presumably to make up for the cheapness of the alcoholic drinks) had a pleasant fruitiness she wasn't expecting. 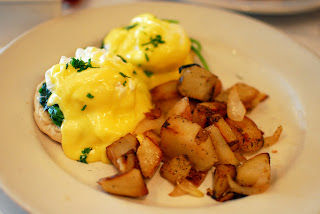 Bunny found her long awaited Benedict to be very bright in flavor.  The eggs were wonderfully cooked, and the spinach lovely and fresh.  The potatoes that accompanied the dish were a tad greasy, decently spiced, but very ordinary. 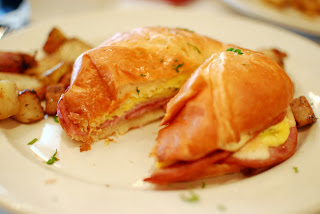 Brandy's sandwich was dominated by the smokiness of the cheese.  She felt a veggie of some sort, as simple as a bit of tomato or lettuce, would have helped liven up the bite.  The croissant was good on flavor, but not very flaky, and the eggs were good, but a little greasy as well. 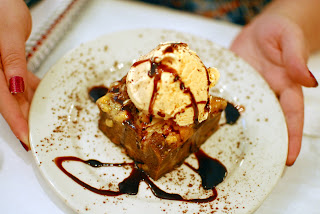 Since portion size was on the small side, Our Ladies decided to split a dessert.  They ordered some chocolate bread pudding, which came with vanilla bean ice cream.  The texture was wonderful, not too dense, but rich enough to be satisfying, and the chocolate flavor definitely came through.  The only improvement would have been, perhaps, a different, more exciting ice cream to accompany it.

Though the portions and plating were a little underwhelming, Angelina did present Our Ladies with drinks, entrees, and a dessert for two for just under $20 a piece.  Their advice; come early to get the good tables, bring cash, and in the words of Brandy to a group of young men in green plastic hats standing just outside the door, "Stop pretending to be bloody Irish and celebrate your own heritage, you wankers!" 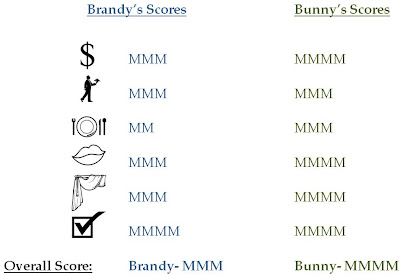 Posted by Bunny and Brandy at 8:50 AM