From the Kitchens of Bunny and Brandy

Funny Story.  When Our Ladies heard about the Great Blizzard of 2011 approaching, Bunny suggested that they hunker down in her decommissioned underground bomb shelter until the storm subsided.  Having not used the bomb shelter as anything more than a game room for few decades, certain features of said bomb shelter had fallen into disrepair, such as the rust that had found a home over the door latching device.  So after the storm had passed (and Our Ladies had passed a pleasant evening playing snooker) Bunny and Brandy discovered that freeing themselves from the bomb shelter was going to be a slight bit more difficult than it had been to enter it.

Eventually Benedict, Bunny's hubby, returned from one of his archaeological digs to find his dear wife and her cantankerous friend had been missing for several days.  The mystery of where they were was solved fairly quickly when he heard shouting coming from the bomb shelter in the back garden (Brandy had discovered a bottle of cooking sherry in the shelter's pantry and, in order to deal with cabin fever, began verbally reciting the entirety of Winston Churchill's autobiography).  As it was Super Bowl Sunday, Benedict decided to spare his wife the boredom of watching American football (after all, she'd been in there for nearly 6 days already, a few more hours wouldn't hurt) and released the poor dears at around 9:00 pm.

As their release came far too long after brunch, Our Ladies decided to fend for themselves this week.  And so, we present yet another installment of From The Kitchens of Bunny and Brandy.

Pre heat oven to 350 degrees.  Coat each section of a 12 slot muffin pan with cooking spray and set aside.  Defrost spinach in microwave oven, then drain (works best to place spinach in cheese cloth and squeeze until almost no water comes out).  Set aside to cool.

In a large bowl, scramble all the eggs together. Add the onion, cheese, spinach, salt, and pepper, then mix until combined.

Unwrap crescent roll dough and section off into 2 inch wide rounds (about 1/4 inch thick).  Place one round into the bottom of each section of the muffin tin.  Spoon egg mixture over dough rounds until filled level with the muffin tin.  Place in the preheated oven and bake for 20 minutes.  Cool for 5 minutes on a wire rack. 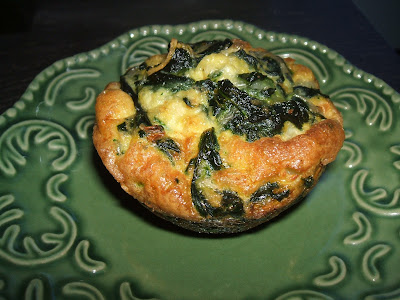 ﻿
Crecy Soup
1 pound of carrots chopped into 1 inch pieces
3 medium sized leeks chopped into 1 inch pieces
3 medium yellow onions roughly chopped
1 head of garlic minced
1 herb sachet (rosemary, sage, and thyme tied in cheese cloth)
1/4 cup of butter
1/3 cup of flour
6 cups of chicken stock
1 1/2 teaspoons of sugar
2 table spoons of orange juice
1 cup of heavy cream
Salt and pepper to taste
In a large stock pot, melt butter over medium heat and saute garlic until caramelized.  Add carrots, leeks, and onion, and cook for 5-10 minutes or until leeks begin to wilt.  Add flour and stir to cover vegetables.  Slowly begin to add chicken stock, making sure flour does not clump.  Add herb sachet and bring to a boil, then reduce to a simmer and cover for 15 minutes.  Add sugar and cook for an additional 15 minutes.  Remove pot from heat, remove herb sachet and transfer soup in batches into a blender and puree until smooth.  Add soup back to pot, mix in orange juice, cream, salt, and pepper.  Garnish with shredded Gruyere cheese and chopped chives. 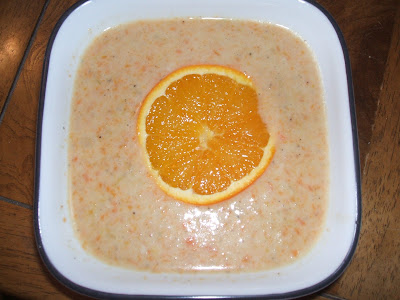