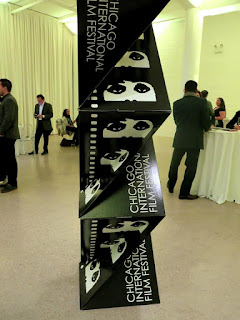 Hello there.  Today, I'm blogging as Jessica and not as Bunny and Brandy's nameless narrator because this particular post is something pretty personal, so please forgive this rare intrusion into my own elaborate fantasy world.

On Monday night, I was invited to attend a screening of and reception for Insatiable: The Homaro Cantu Story, a film by documentarian Brett Schwartz, as part of the Chicago International Film Festival at AMC River East.  The film, as you can probably tell by the title, told the tale of Chef Homaro Cantu, innovator, culinary genius, and all around wonderful human being.  If you've read my tribute to the late chef, then you'll know exactly why this film was especially meaningful to me and why I was more than honored to attend this particular screening.

Schwartz first learned of the work Homaro (or Omar, as he was known to family and friends) was doing in a 2005 New York Times article.  He then spent three years following Omar around, witnessing first hand the man's manic energy as he spearheaded project after project, constantly striving to innovate the food industry for the betterment of humanity.  As asserted in interviews all throughout the film, it was hard to be around Omar and not get caught up in his lofty schemes, and Schwartz does a fantastic job of letting the audience feel his desire to save the world.

It was a troubled beginning in life that shaped everything Omar tried to do as an adult.  He didn't just want to create extraordinary food, he wanted to eliminate world hunger, decrease pollution by decreasing food miles and packaging, and even take sugar out of the American diet vocabulary with use of the miracle berry.  He truly was a mad scientist, but one with a heart and a great sense of humor, which comes through brilliantly in the film.  Sure, there is that hint of hard-ass chef (especially when he relates the story of Moto's first Valentine's Day service, where he almost purposely cut the power to the restaurant to escape an overbooked service), but that same conviction is what drove him to try and create an ambitious empire of innovation on par with companies like Apple or Tesla. 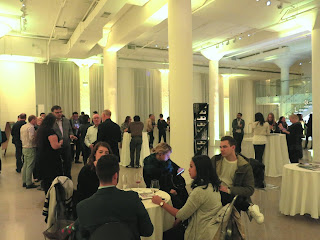 Sadly, many of Omar's plans never came to fruition or started to crumble in front of him during the final years of his life.  iNG was forced to close down after flooding issues made them a high risk tenant.  Moto lost one of its driving forces in Richie Farina when he decided to leave and pursue other opportunities.  Well publicized legal troubles began to plague Omar, slandering his character by portraying him as careless with the money of his investors.  The film doesn't shy away from any of the controversy, and for those who know what's coming, the latter part of the film feels not just like a "gut punch," as Schwartz put it, but a gut punch in slow motion.

The thing that brought me to tears was the final moments of the film, in which the camera pans through the Fast Forward Exhibit at the Museum of Science and Industry, which showcases some of Omar's forward thinking inventions, like the 3D food printer and a polymer table top oven.  This was the very exhibit in which I first heard of Homaro Cantu, Moto, and all the wondrous things going on down on Fulton Market.  This was what gave my friend and me the idea to stop into Moto for a drink one blustery fall evening seven years ago, where our experience there changed my life by inspiring this very blog. 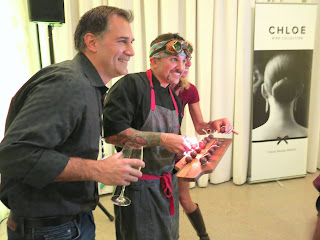 My nostalgia for that moment was further enforced by the reception after the screening, where Moto alums Richie Farina and D'Andre Carter (along with D'Andre's team from his catering company, Feast and Imbibe) served up small plates of their signature flavorful and stunningly presented food.  Both these guys hold a special place in my heart and my history; Richie, because he was the person who toured us through the kitchen at Moto when I returned there for dinner as Homaro's guest in June of 2010, and D'Andre because of his patience with me when I shadowed him as a "guest chef" one fateful day at iNG in December of 2012. 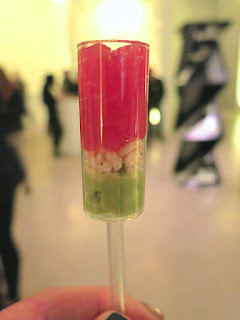 The food, as to be expected, was the perfect showing of skill and mischievousness, like the miniature beef and broccoli with a pipette of soy sauce, the tuna and avocado mousse push pops, or the strawberry short cake shaped like a tiny ice cream cone.  But it was when Richie emerged from the kitchen, that trademark Cheshire cat grin plastered across his face as he gestured to a plank of small round balls, that I nearly burst into tears once more.  These were S'Mores Bombs, a signature dessert from the Moto days, that look like an innocuous chocolate truffle, but have a flammable marshmallow wick and a magical, liquid graham cracker center.  This was the very bite my friend and I were offered that night in October of 2009.  We had paid for a single cocktail each because it was all we could afford, and the staff, over hearing our humming and hawing over whether to split the dessert flight they used to offer at the bar, took it upon themselves to bring us the bombs.  That magical presentation of watching the wick burn down, the glorious moment of tasting the graham cracker as it washes over the tongue... That was what had caused me to send a tweet of thanks to Homaro.  That was what caused him to send me an invitation to dine at Moto.  And that was the meal that started the blog. 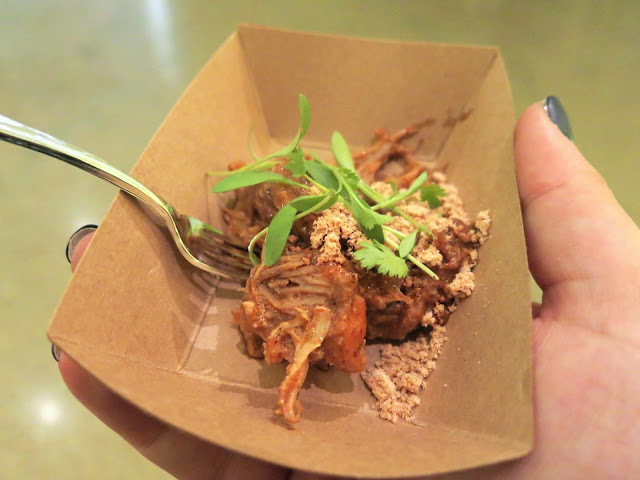 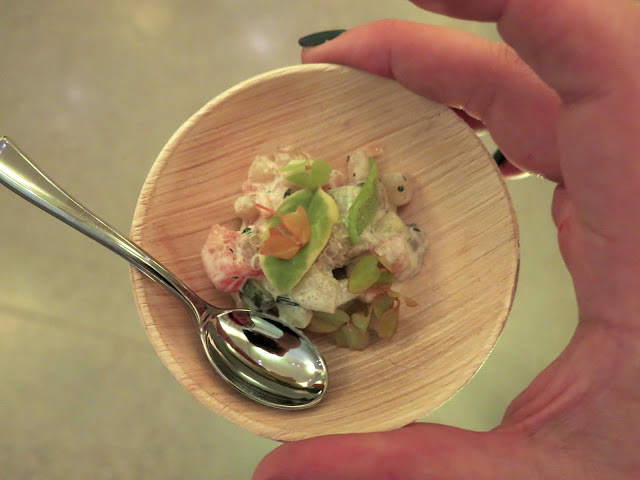 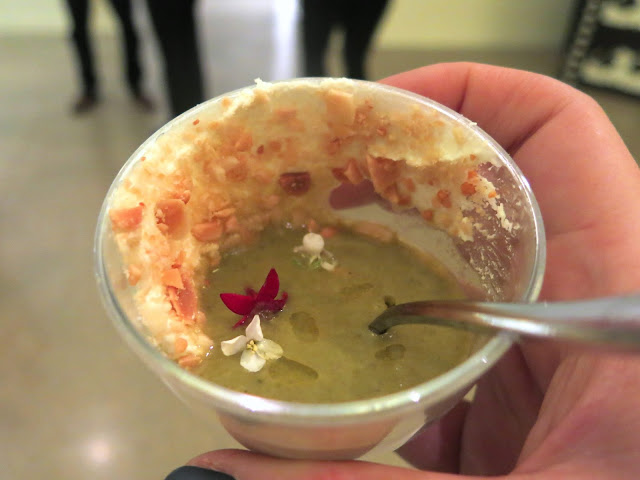 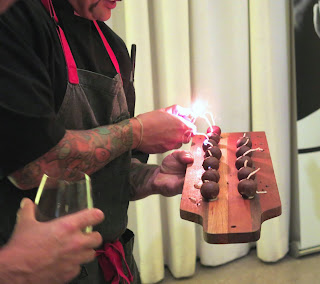 Monday night, as I looked at that little melting ball of chocolate between my fingers, I held back tears because I never thought I'd get to experience that moment again.  But there it was, the bite that started everything, given back to me with just as much generosity as it had been given almost exactly seven years ago.  In a year that has been very emotionally tough for me, I needed Insatiable to remind me that there is still a hell of a lot of good people in this world, and we all need to do our part to inspire the best in each other.

You can follow Insatiable: The Homaro Cantu Story on Facebook to find out where it's playing next.  I also encourage you to consider a donation to the Cantu Children's Trust, which goes towards ensuring Homaro's two girls are promised a bright future.

The writers of this blog were invited to attend this event free of charge in order to facilitate the writing of this post.
Posted by Bunny and Brandy at 11:10 AM