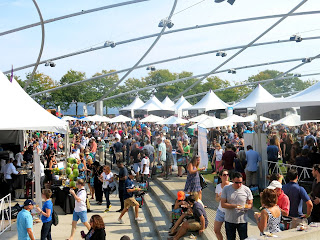 These days, there's a holiday for every food stuff one could imagine.  There's Eggs Benedict Day and Ice Cream Day, Taco Day and Burger Day, and even days for Clam Chowder and Butterscotch.  But there is only one day that encompasses them all, and that day... is actually two days, otherwise known as The Chicago Gourmet Festival.  "Let's just call it National Gluttony Day,"  Brandy likes to joke. 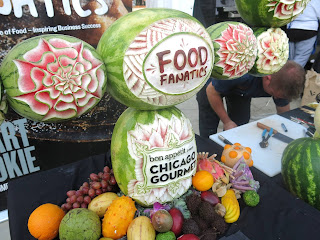 This year, the festival was themed around the idea of Food as Art with Rick Bayless serving as a Host Chef, helping to bring in a more curated experiences than ever before.  Right away, Brandy noticed several art installations around the grounds that fed the eyes just as much as she was about to feed her gut.  She especially liked the impressive food sculpture display made out of pumpkins and melons.

Diving straight in, Brandy took a cue from her strategy last year and headed straight for the Four Corners Tavern tent, where they had laid out a collection of decadent dishes representing their various restaurants: Pork Belly Tacos for Federals, Avocado Toast for SteakBar, "Rumfetti" Cupcakes with a Boozy Horcata shot for Fremont, and refreshing Moscow Mules served in miniature copper mugs.  "This is a nice little microcosm of what's in store for me today," Brandy said with amusement, "Something fresh, something rich, something sweet, and something with alcohol.  Perfect." 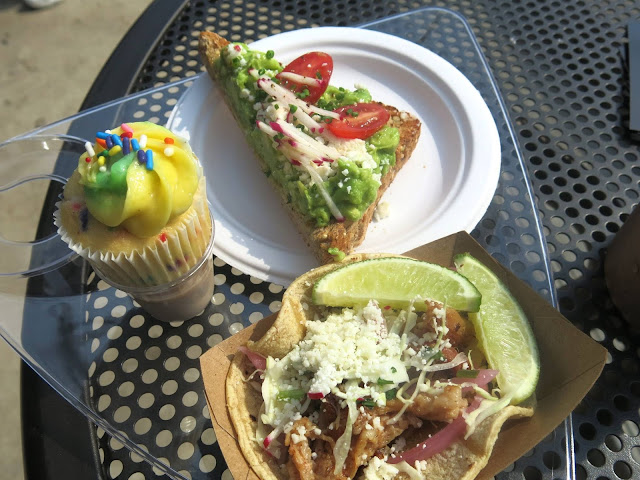 The Fresh: When Brandy was presented some simple looking broccoli from Ada St., she was a little put off, but upon tasting the charred broccoli with tahini butter, greek yogurt sauce, and nigella seeds,
she became an instant fan. A couple of cold soups were also strand outs with a grilled pineapple gazpacho with pink crab from Hugo's Frog Bar and a smoked corn soup with paprika oil and crab salad from Dusek's.  Tuna was another popular choice with Kamehachi featuring a Tuna Tokashi on crispy rice and Ema showing a delicious Ahi Tuna Crudo with tomatoes, avocado, turmeric, and crispy lentils.  Brandy's favorite of the fresher options she tried was a simple beet salad with gooseberries, goat cheese, and black walnuts from Eden. 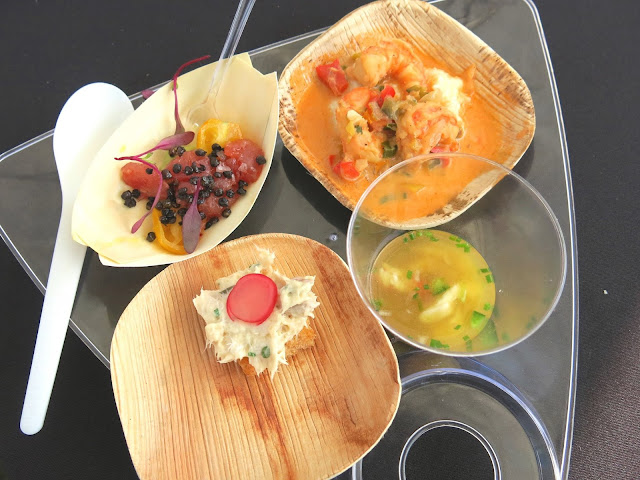 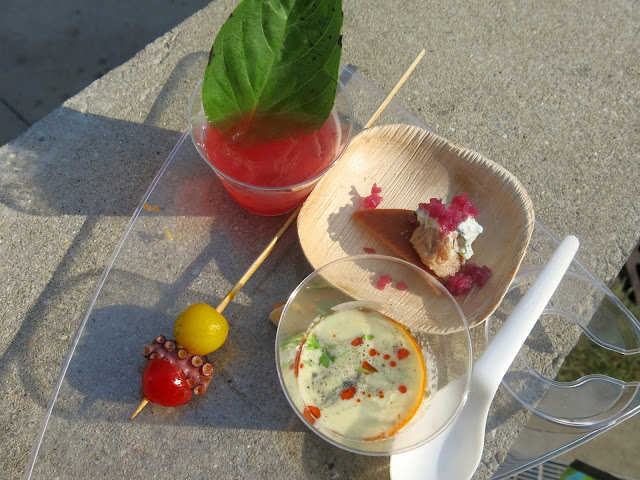 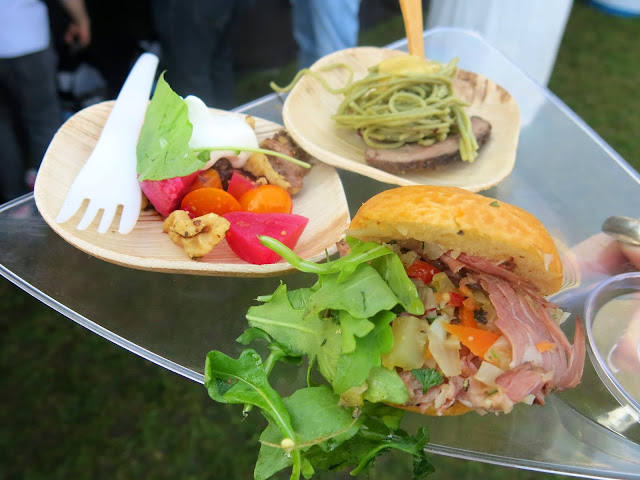 The Rich: Meat of all kinds was certainly not in short supply at this year's festival.  Old Crow Smokehouse had their own tent, where they were serving up a lip smacking brisket slider and a finger licking Memphis taco with pulled pork, cole slaw, and a beer BBQ sauce.  Over in the Sister Cities tent, Brandy discovered an intriguing plate of berkshire pork shoulder over apple garlic mash with walnut dressing from Avli (who were representing Athens), as well as some slow braised ribs with 15 Indian spices and yellow rice from Vermilion (who stood in for Delhi).  Brandy was excited to see two favorite dishes from the previous year's festival making a come back in the form of the 5 spice duck breast with green tea soba noodles from City Winery and the garlicky escargot from Cite.  Surprise new favorites were the smoked sturgeon with corn relish and peanuts from the MCA Cafe and the shrimp and cheesy grits from Dirk's Fish and Gourmet Shop.  The NFL even made an appearance with their custom slider tent, in which football fans were invited to create a tailgating sandwich worthy of their favorite team (Brandy created an ode to the Steelers by adding on some caramelized onions, provolone cheese, ketchup, and a make shift coleslaw). 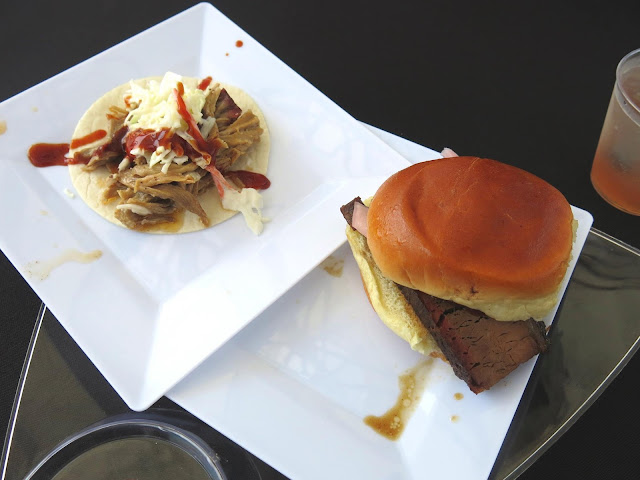 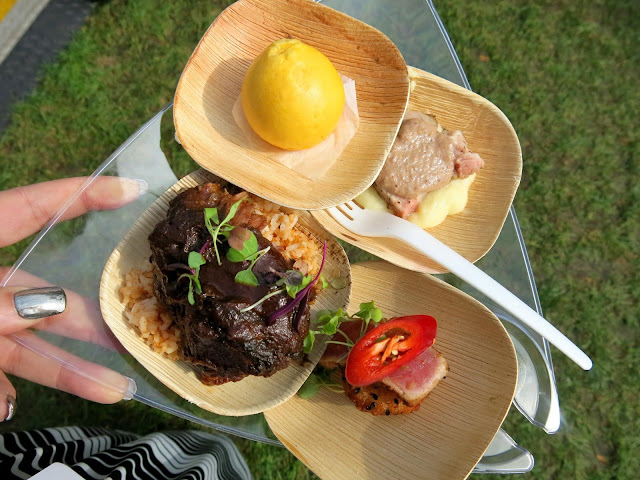 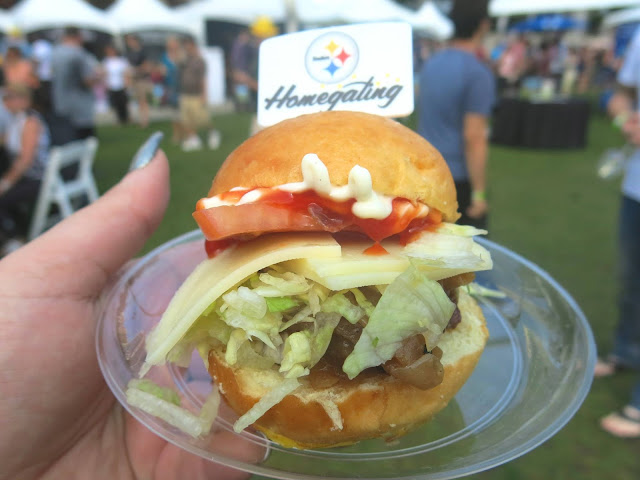 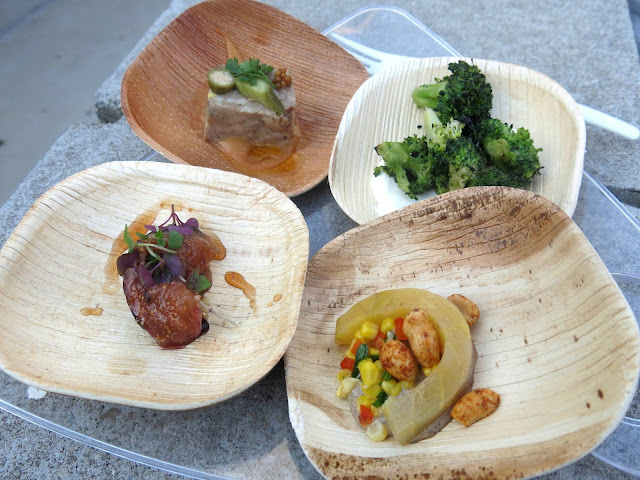 The Sweet: Brandy noticed a distinct drop in the number of sweet items available at this year's festival, but there were still a few surprises to be found if one looked hard enough.  Stan's Donuts stocked piles of gorgeous blue velvet old fashioned donuts coated in shredded coconut.  Bistronomic (fresh off a Hamburger Hop win) brought in their infamous chocolate hazelnut bars with some raspberry coulis, while Nellcote featured a rather understated sweet treat of poached figs with honey and micro greens.  Imperial Lamian straddled the line between sweet and savory perfectly with their egg custard bao buns, but the star of the day was most definitely the "macaron sliders" from Café des Architeches, which appeared to be miniature burgers, but were in fact chocolate cream filled cookies!  With her sweet tooth not quite satiated, Brandy stepped into the World Gelato Tour tent, where samples of a dozen different flavors were being handed out.  Brandy's favorites included the pink peppercorn and balsamic from Volare, the Bella Sicilia from Piccolo Songo with pistachios and white and dark chocolate, and the raspberry rose petal from Black Dog Gelato. 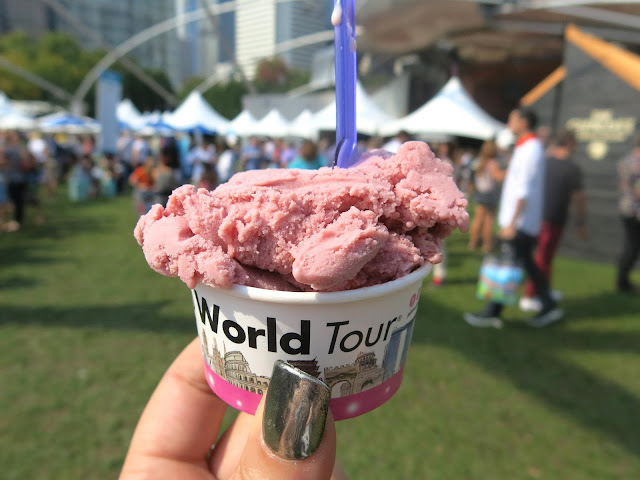 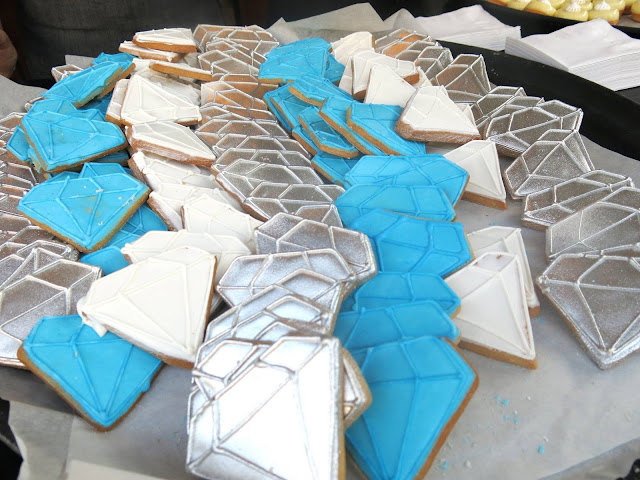 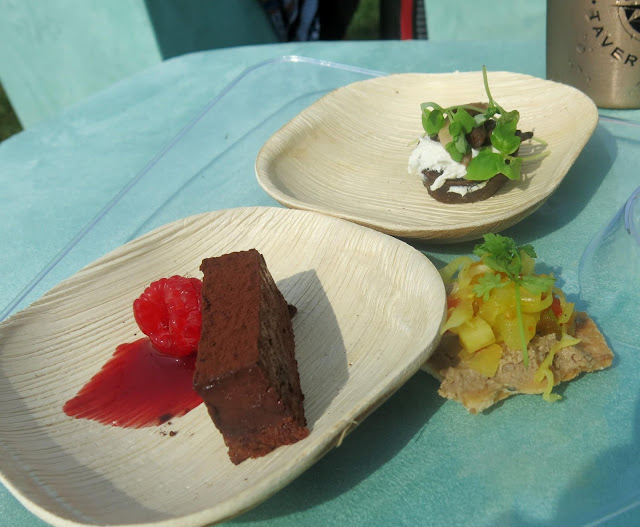 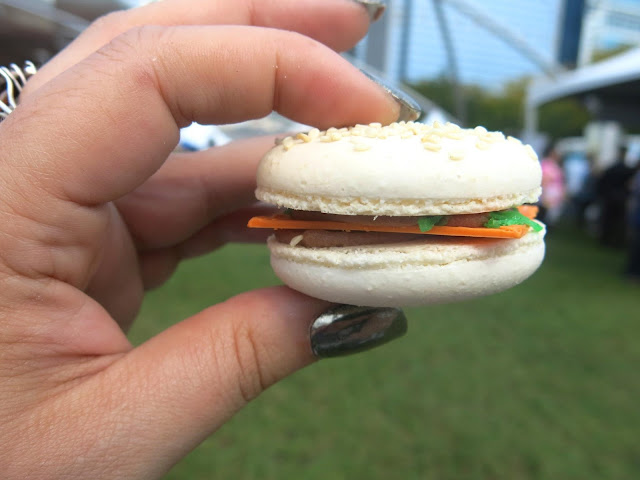 The Drinks:  As is usually her strategy at massive tastings, Brandy stuck to cocktails so that could keep moving quickly (she's found that stopping for wine can often lead her down a rabbit hole of discovery, while cocktails are more easily enjoyed on the go while waiting in line for more food).  Of particular note were the peach spritzer from the Belvedere tent, which was featuring a variety of fruity themed beverages, the Front Porch Punch from Old Crow Smokehouse with Ole Smoky Blackberry Moonshine, St-Germain Elderflower Liqueur, lemon sour, club soda, blueberries,  and raspberries, and the Bourbon Berry Basil punch from Punch House.  However, it was when Brandy discovered the center piece of the festival, the Beam Society Digital Cocktail Experience tent, that things began to get a little bleary, as so many cocktails were being sampled within its confines that it was a good long while before she made it back out into the sunshine. 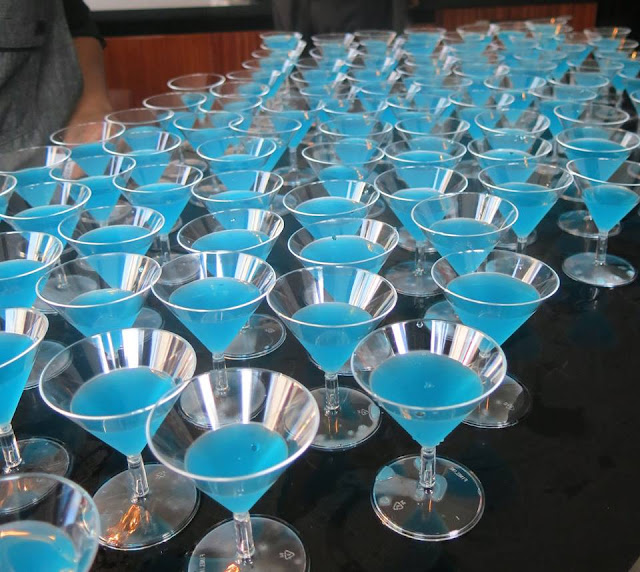 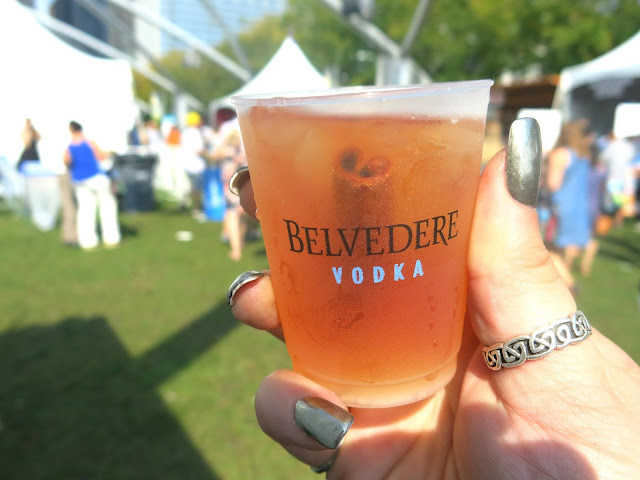 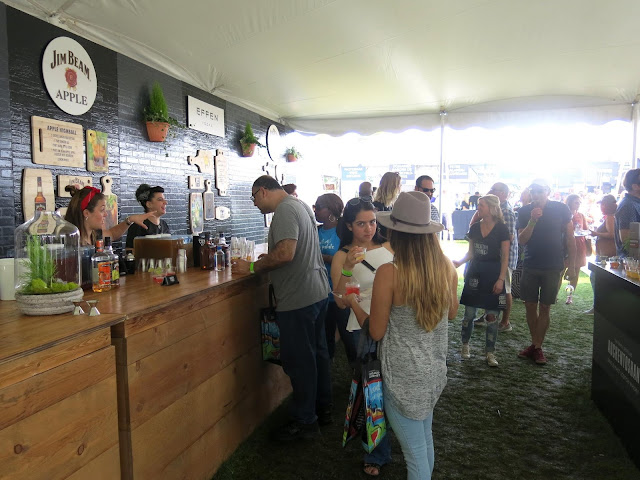 As the day wound to a close, Brandy took in a single seminar, hosted by Between Bites and featuring food themed stories from Lee Zaremba, cocktail creator extraordinaire for Billy Sunday, who gave a rather amusing tale about how a former career as a break dancer eventually lead him into his current position, Donnie Madia of One Off Hospitality Group, who explained that treasured memories from his childhood were what helped him to create the right kind of atmosphere in his restaurants, and Brandy's idol, Ina Pinkney, who told a touching tale about how a slice of pineapple pie brought her and her father together. 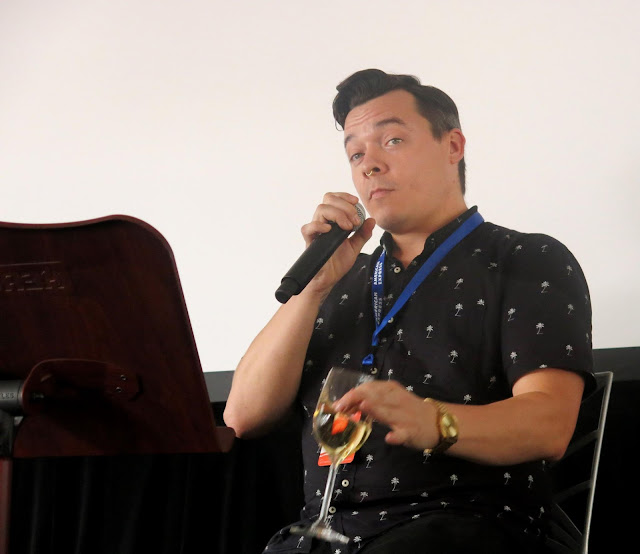 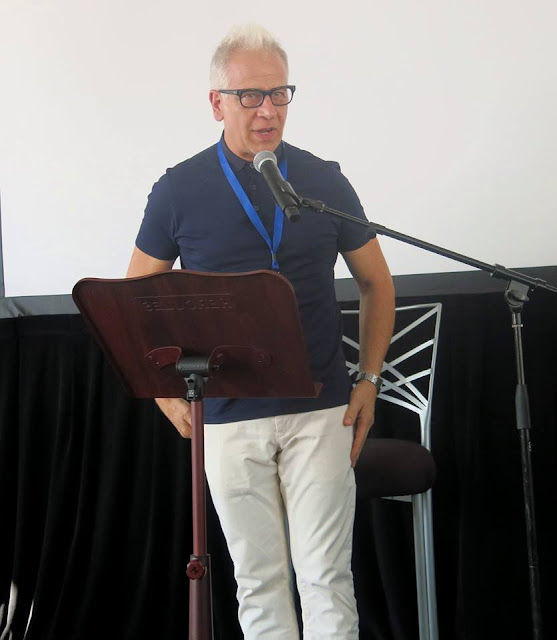 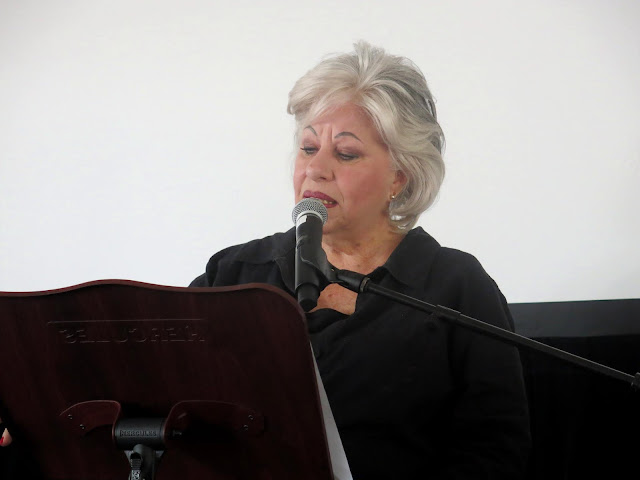 "I came, I saw, and I conquered, so I think its time to head home," Brandy sighed as she shambled out of the park, "If the weekend of Chicago Gourmet is to be known as National Gluttony Day, then I would argue that the Monday after should hereafter be known as a national day of mourning.  Because it marks the longest possible period of time until the next festival."

You can see all of the pictures from Brandy's Chicago Gourmet adventure on the Bunny and Brandy Facebook page!

The writers of this blog were given entry to this event free of charge in order to facilitate the writing of this post.
Posted by Bunny and Brandy at 11:57 AM