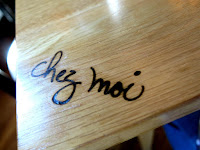 Brandy gets pretty picky about her pumpkin intake during the fall.  She used to be as big a fan as anyone else of the classic autumn flavor, but once it became over played and watered down, she found herself leaving the pumpkin spice behind.  "People don't seem to understand that the joy of pumpkin is the subtly sweet, earthy squash flavor that is complimented by, rather than masked by, cinnamon, nutmeg, cloves, and the like," says Brandy, "It's so flexible, so perfectly between the line of sweet and savory, and that is why we've grown to love pumpkin in the first place!" 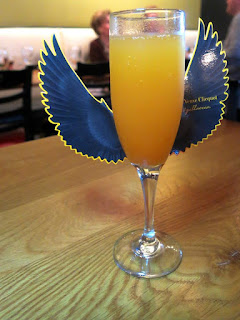 So when Brandy heard that Chez Moi (home of the only Bloody Mary she'll ever drink) was hosting a Pumpkin Fest with special pumpkin themed brunch and dinner items, she felt it was her civic duty to check it out.  The special menus are running through October 30th with drinks, entrees, and desserts, all featuring the fall's favorite gourde.

Brandy started off her meal with a drink called The Great Pumpkin, a twist on a mimosa with Grand Marnier and a spiced pumpkin semifreddo.  The spice in the drink combined with the sparkling wine and the sweetness of the liqueur made for an almost apple cider like flavor, but the aftertaste was distinctly pumpkin.  "A crisp drink for a crisp fall morning," Brandy sighed with satisfaction. 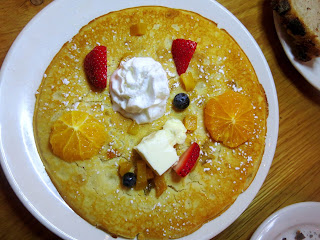 Starting off sweet, Brandy sampled the Pumpkin Pancakes with cinnamon butter.  Despite pumpkin pancakes being a fairly common fall brunch item these days, this dish differentiated itself by the use of fresh pumpkin mixed into the pancakes, rather than pumpkin puree, with a few more pieces of pumpkin and fresh fruit to top them off.  This meant that not only was one experiencing pumpkin flavor, but also the texture, a rarity in most sweet pumpkin dishes.  The cinnamon butter was just subtle enough to not overwhelm the delicate flavor, and Brandy felt that a good slick of maple syrup really helped to bring the pancakes to life in all their autumn glory. 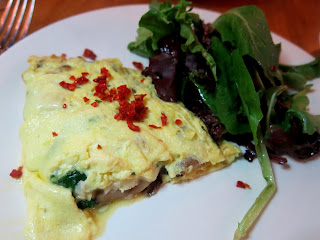 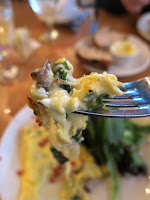 Next up was the Pumpkin Omelette, an intimidating and adventurous option.  "I don't know that I've ever had squash in an omelette before," Brandy commented, "But I'm certainly wiling to try everything once."  As it turned out, the tiny bit of sweetness from the pumpkin really enhanced the dish, especially when paired with some earthy pumpkin mushrooms and a delightfully nutty cheese.  "How perfectly fall!" Brandy exclaimed, once again reveling in the use of fresh pumpkin rather than a more processed form, "Perhaps next year I can convince Chez Moi to do this same combination of flavors in their oh so delightful quiche!" 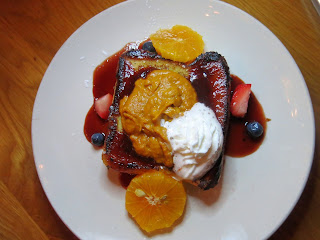 Finishing up the entrees, Brandy ordered up the special version of Chez Moi's decadent French Toast, this time topped with a pumpkin pie flavored mascarpone.  This was definitely the dish for the pumpkin spice lovers of the world, as the light and fluffy mascarpone really set off the eggy, buttery toast, and the pops of flavor from the fresh fruit scattered around the plate.  "I adored this French toast the first time I tried it," said Brandy, "But I love this version just as much.  They're like fraternal twins, similar in looks, but each with their own distinct personality."

Lastly, Brandy finished with one last sugary indulgence, the Pumpkin Crème Brûlée.  There was nothing too complicated about this dish, just a delightfully aerated cream, infused with plenty of pumpkiny goodness, and topped with a perfect burnt sugar crust.  "This all just goes to show exactly how versatile pumpkin is," Brandy commented, "Sweet or savory, when a skilled chef is the one bringing out that elusive, delicate flavor, it's hard to go wrong." 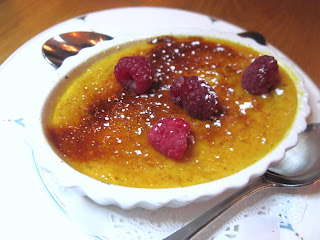 There's only four more chances to check out the special Pumpkin Fest brunch menu at Chez Moi, but the dinner menu is available every night until the 30th of October.