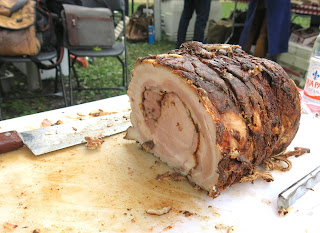 If Taste of Chicago is for the food loving public and Chicago Gourmet is for the more dedicated foodies among us, then Taste Talks is the food festival for the die hard food fans.  Now in its third year in Chicago, Taste Talks brings together chefs and industry experts for a whole weekend of amazing food experiences, informative seminars, and demos that aim to not only entertain, but to educate.  Brandy has been a big fan of this particular festival since its inception, and when she saw this year's lineup, she was more excited than ever to return. 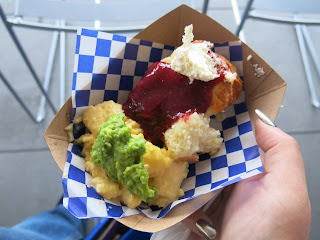 After a raucous opening night party, the festival began in earnest on Saturday morning with Bang Bang Pie serving up their signature biscuits along with some scrambled eggs, ham, bacon, and a variety of toppings that kept everyone's energy high throughout the day.  Nescafe was also on hand to make sure the attendees were well caffeinated, while Kellog's returned with their innovative cereal bar, this time with augmented bowls created by Brian Jupiter (of Frontier), Joanna Stachon (of Ada Street) and Mike Sheerin.

Settling in for an afternoon of talks, Brandy first attended an infinitely interesting panel about the forgotten history behind Chicago's restaurant scene.  With Tony Mantuano leading the way, panelists Matthias Merges, Jimmy Bannos, Tony Quartaro, and Carrie Nahabedian shared stories about the restaurants where they learned their trade, waxing poetic about the days when irate chefs could (jokingly) throw knives at their underlings without fear of repercussions from any HR department.  The thing that became more than obvious during this talk was that all roads in Chicago led both to and from the late, great Charlie Trotter, whose infamous restaurant proved to be a catalyst for the thriving restaurant scene Chicago has today. 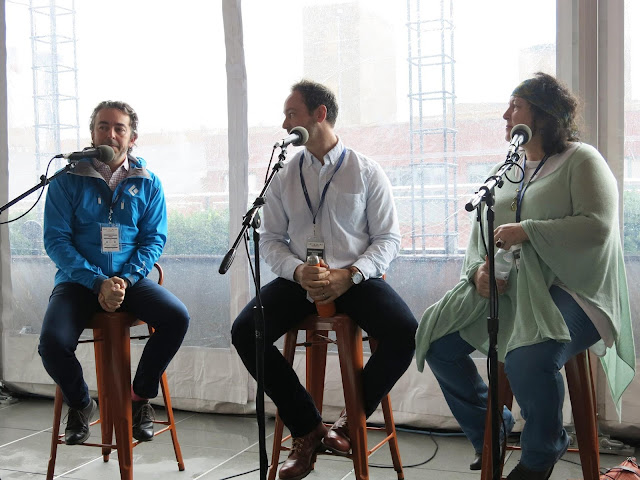 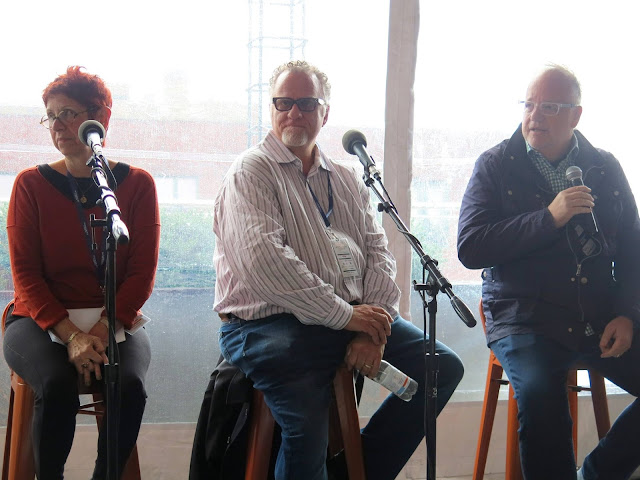 Next, Brandy listened with interest to a panel about the fine dining revolution, where restaurant insiders like Kevin Boehm from Boka Group, Belinda Chang from Maples and Ash, and Gregg Horan from Gibons Restaurant Group discussed how the days of the black tie and white table cloth could possibly be coming to an end.  "Not a moment too soon!" Brandy thought to herself, "I shouldn't have to put on my good jewelry every time I want to go out for a steak.  That is, unless I want to, of course." 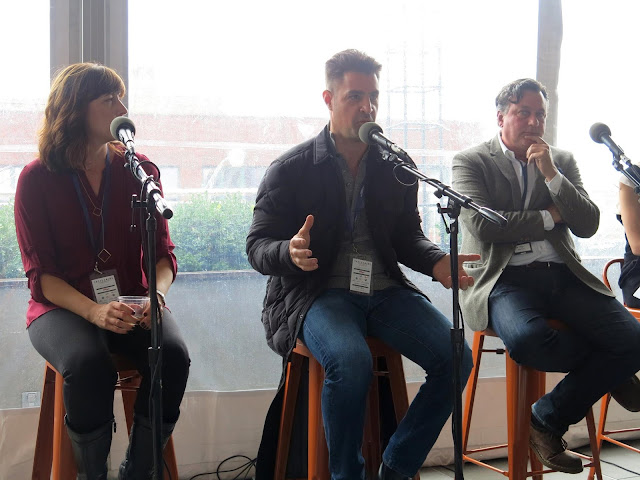 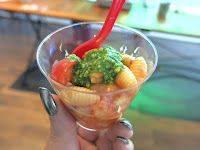 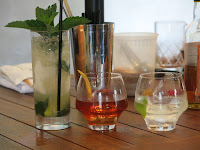 Down on the second floor, the San Pellegrino stage housed demos by the likes of Abe Conlon from Fat Rice and Jimmy Bannos Jr, among others.  Brandy listened with vested interest as cocktail king Paul McGee explained the history of rum to an enraptured crowd and even mixed up a few cocktails for them.  Sarah Gruenberg then stepped in to show her skills at making pesto, which she has become an expert in since opening Monteverde, where she makes all of the pesto herself.  The highlight of that demo was actually getting to try some of Sarah's pesto on top of some home made pasta with a creamy tomato sauce and plenty of cheese. 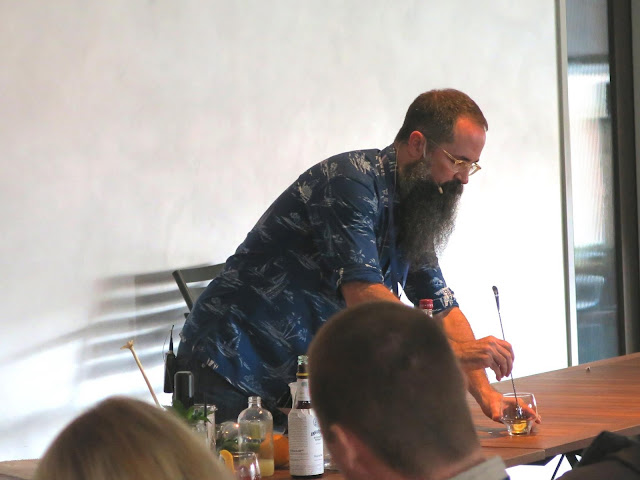 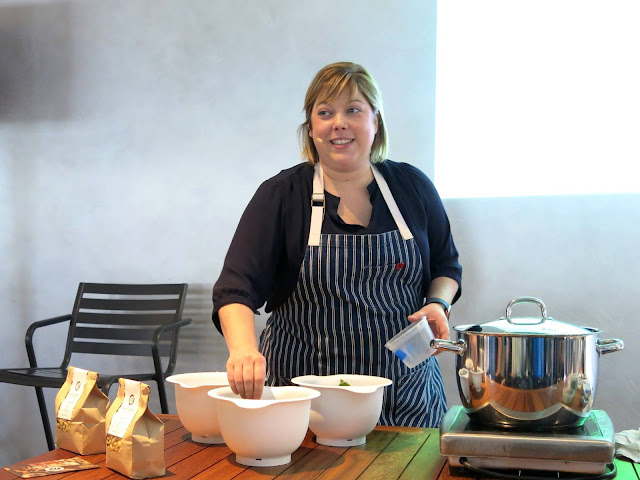 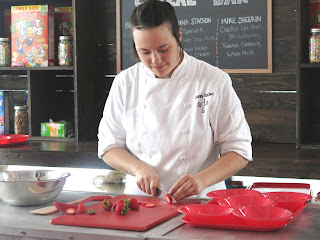 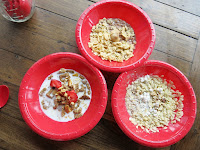 In the middle of the day, Brandy once again attended the Kellog's Cereal Bar Throwdown, where Brian Jupiter and Joanna Stachon were presented with a tray of mystery ingredients and tasked to create the ultimate bowl of cereal while being subjected to a barrage of  cereal related trivia questions.  In the end, Brain Jupiter took the crown with his creation (the crown being a vintage Tony the Tiger doll, which his daughter was very excited to receive). 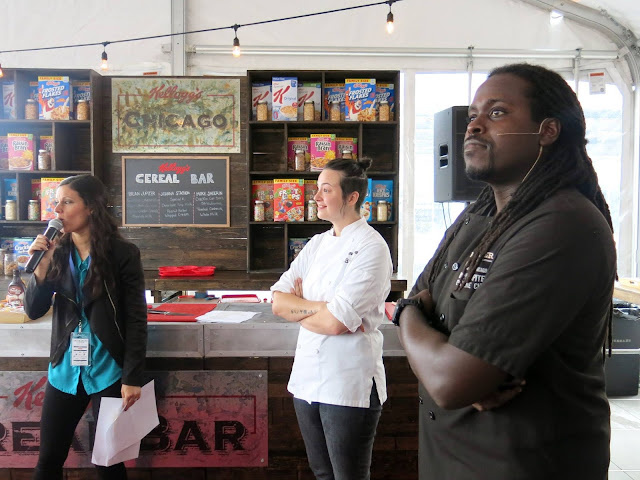 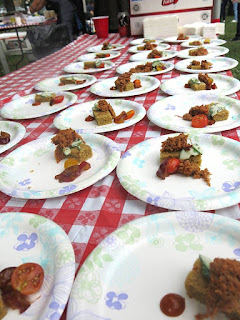 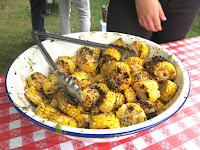 Sunday marked the All Star BBQ, which is always Brandy's favorite part of the Taste Talks Weekend.  She particularly enjoyed the abundance of meaty options this year, which did give the place more of a BBQ feel.  Jason Hammel and Sarah Rinkavage of Lula Cafe teamed up with Dan Bitney from Tortoise to create a really interesting short rib dish with crunchy seeds, red cabbage, and huckleberry, while Charlie McKenna from Lillie Q's took short rib in another direction with Johnny cakes, collard green kimchi, and pickled veggies, and Paul McGee and Pete Coenen brought in short rib skewers with avocado and lime to pair with a cocktail of pineapple, rum, lime, and apricot.  Also featuring beef was Bjorn Rasmussen of Old Town Social with a classic slider topped with a sharp cheddar, red onion, black pepper jam, and charred bone marrow aioli for a truly decadent experience.  Jared Van Camp from Leghorn Chicken won Brandy over instantly with his mini chicken and waffle bites, while Chris Pandel chose a non meaty star for his dish of corn on the cob with uni butter and candied shrimp.  But it was Big Star that really stole the show with their grilled adobe marinated porchetta sandwich with stone fruit salsa. 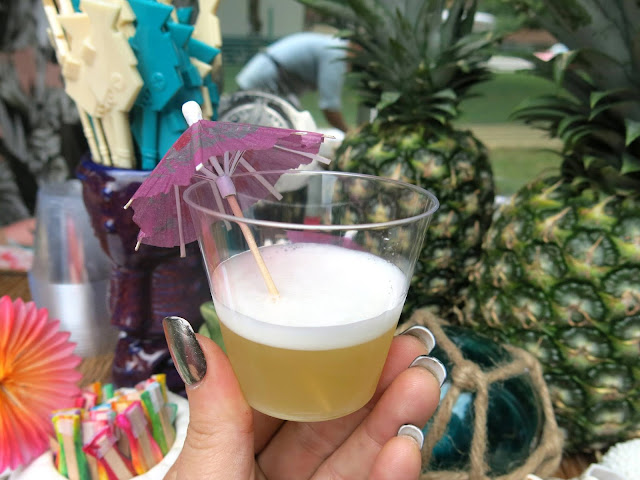 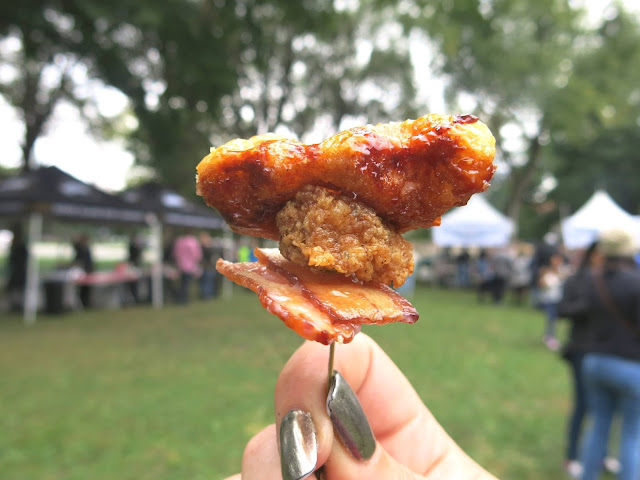 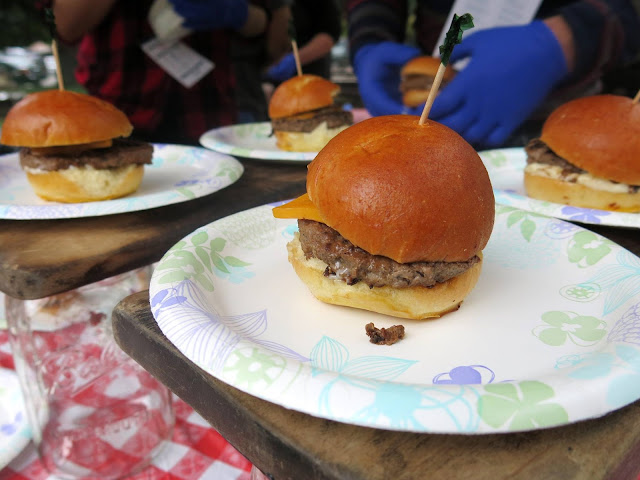 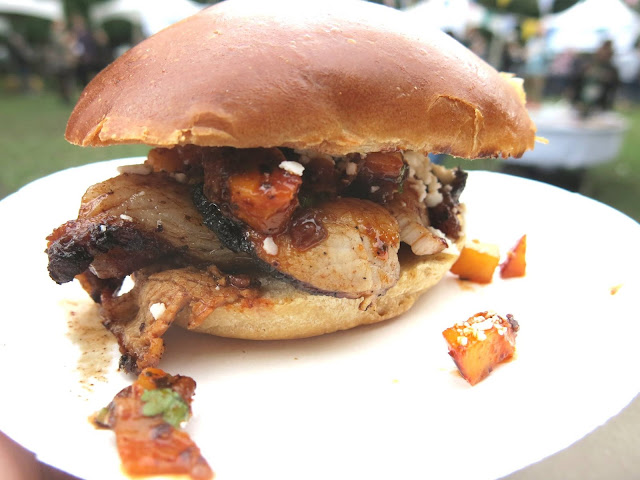 Make sure to check out all the pictures from the weekend on Bunny and Brandy's Facebook page!

The writers of this blog were invited to attend the events mentioned free of charge in order to facilitate the writing of this post.
Posted by Bunny and Brandy at 11:03 AM