Whiskey Thief or The Brunch-less Horseman 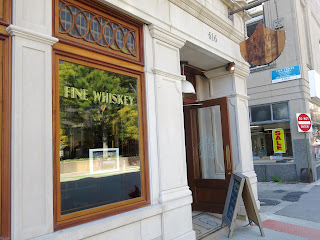 "I've had a very strange dream," Brandy's friend Brocco was telling her, "Normally, I'm not one to believe in the supernatural, but this one just kind of stuck with me. I was standing on a hill, looking over a large green field. The sun was shinning and there was a herd of goats frolicking down below me. Then, the sky went dark and this figure on horseback came riding into the field. I suddenly realized he was headed up the hill and straight for me, so I started running. And then he was right in front of me, blocking my path. He had a long black cape and the eyes of his horse were blood red. I couldn't see his face, though, because it was obscured by something... something that looked like a frying pan. And he had a squealing pig under one arm and a chicken under the other. Also, he smelled like whiskey. He threw the pig at me and then he snatched the sleeve off my shirt and just sort of... rode away into the darkness." "Well, that certainly is a harrowing tale. But I don't think its anything supernatural." "No?" Brocco asked. "No. I think its just your brain trying to tell you that you need some brunch." "How do you figure that?" "A chicken and a pig? Sounds like bacon and eggs to me!" "But what about the sinister whiskey-smelling sleeve thief?" "He's telling us exactly where to go for brunch, of course!" 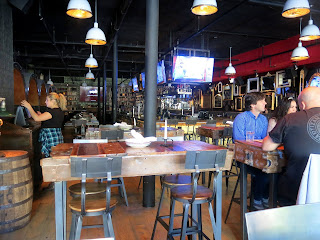 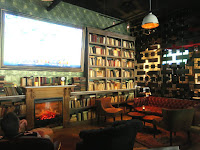 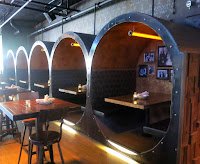 And so Brandy and Brocco headed to Evanston, where Whiskey Thief Tavern had recently begun serving brunch.  From the first step inside, Brandy was instantly smitten with the decor. Heavily worn woods, antiqued metals, and stacks of antiquated books were as far as the eye could see. Along one wall hung an eccentric collection of mirrors, along the other was a line of booths inside what looked to be giant beer barrels, and at the back was a sort of library area with a fireplace and bookshelves almost all the way up to the ceiling. Even though several large screen televisions were scattered around the room, they somehow didn't feel out of place with the centuries old vibe. "What's that thing where the kids dress up like Victorians in sepia tones?" Brandy asked Brocco. "Steampunk?" he ventured. "Yes! Doesn't this place have that sort of feel?" "I can see that. But... you don't think it's haunted, do you?" Brandy only gave Brocco a sly grin. 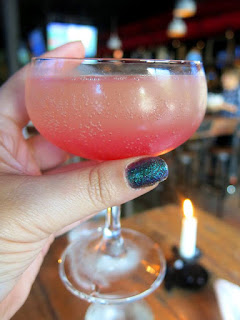 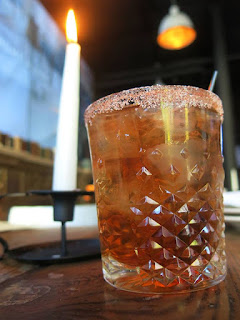 The cocktail menu caught Brandy's eye, so they ordered up some pre-brunch libations. Brocco chose the Hanging Acrobat, a mix of bourbon, honey, lemon, bitters, and an apple cardamom shrub. Altogether it created a crisp and refreshing, yet fall themed flavor that Brocco thought was reminiscent of spiced cider. Brandy chose the Maple Old Fashioned, which was spiked with some smokey chili liqueur. Brandy found it especially sweet and smooth with a great kick in flavor coming from the spiced sugar rim. Brandy also sampled the Pomegranate Bellini, which was bright and fruity without being too sweet.

The meal began in earnest with a plate of Crispy Potatoes and Gravy, a kind of combination of a poutine and a gratin. The potatoes were indeed crispy, even after having been slathered in a thick and creamy white gravy and topped with melted cheese curds. There was a hint of smokiness from the addition of some bacon, and the potatoes themselves had a wonderful buttery flavor without being greasy. "This is like a side dish getting a promotion to the big time!" Brocco proclaimed. 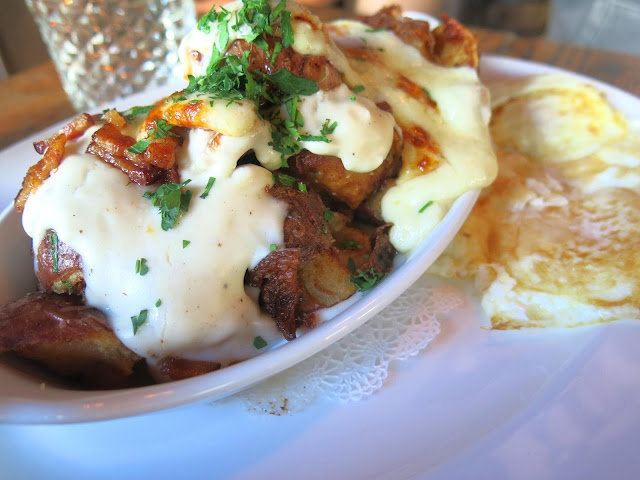 Next, they indulged their sweet teeth by sampling the Whiskey Toast, a sort of hybrid between French Toast and bread pudding. The toast was dense with a lovely vanilla and bourbon like flavor, which was also helped along by a bourbon infused whipped cream. The sprinkling of slightly sour cherries helped to break up the richness of the dish a bit. Brocco had already consumed a third of the plate by the time he looked up to see Brandy glaring at him. "I'm sorry, did you want some of this?" he asked sheepishly. "Yes. That's why I ordered it," Brandy replied. 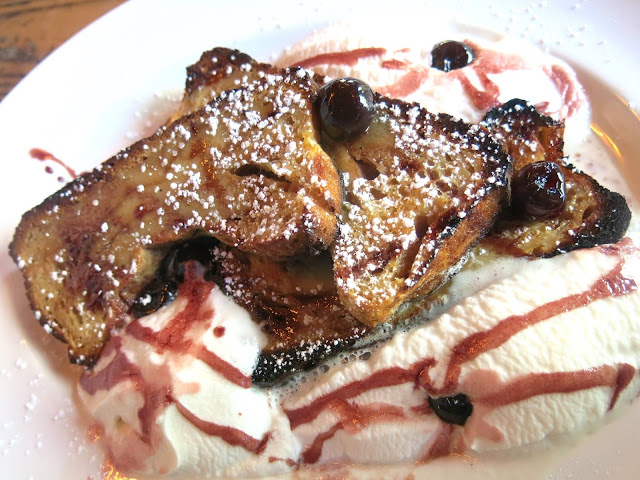 Moving on to his very own plate of food, Brocco ordered the Steak and Eggs. The steak was cooked perfectly and was a surprisingly generous portion of sirloin for a breakfast plate. Brocco particularly liked that the seasoning on the steak was very simple, which let the taste of the meat shine brightly. The potatoes that accompanied the steak were of a smashed variety, much like those in the appetizer, and had a good bit of creaminess and crunch to them. 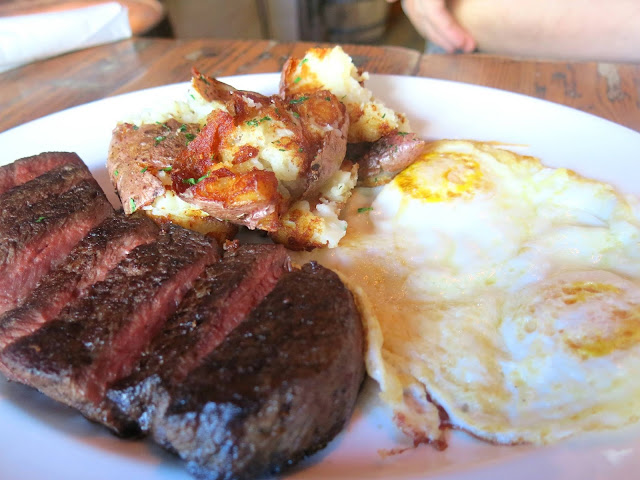 Brandy picked the classic Cheeseburger but added on bacon and a fried egg. The burger was a big juicy mess, as any good burger should be, with the yolk from the egg mingling nicely with the mix of mustard and mayonnaise already on the bun. A little red onion and some pickles were the only other accompaniments to the meat, and Brandy appreciated that things hadn't been overly complicated with condiments and vegetation. "Being the carnivore that I am, I deeply appreciate a meaty burger," said Brandy, "And adding bacon to this sucker is just the icing on the meat cake." 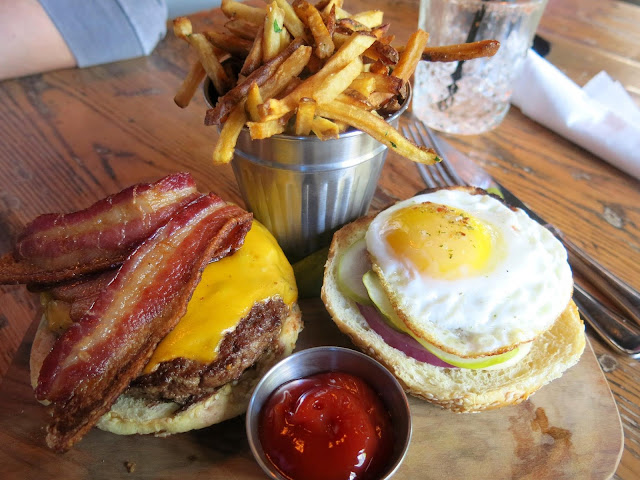 Despite loving the atmosphere and the simple, yet unique takes on classic bar food, there were some slight problems with the service. Dishes listed on the menu were unavailable, entrees were forgotten briefly, coffee was hard to track down, and at the end of the meal, Brandy and Brocco were left waiting for quite some time for a box to pack up their leftovers. The servers, though, were friendly and personable enough. "Maybe that was what the ominous part of my dream was predicting," said Brocco. "Didn't you say that the figure in your dream chased away a herd of goats from a sunny, green field?" Brandy asked, to which Brocco nodded in answer. "Well then," said Brandy, "I think that figure might have simply been the ghost of a certain curse finally leaving town. If I were you, I'd be less worried about ominous figures chasing you and maybe be think about putting some money down on that Northside baseball team right about now." 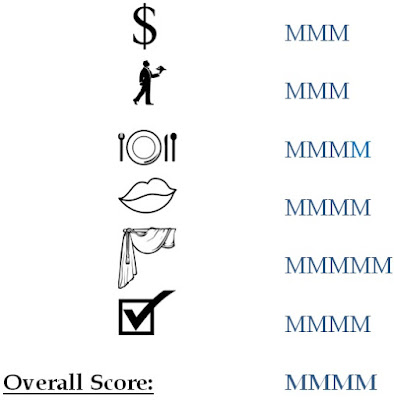