I was invited to dine at Lark free of charge, but all opinions stated below are my own and have not been influenced.

As I've talked about before, up until last year, I'd spent over 10 years living in Lakeview, but what some of you might not know is that my day job is also in Lakeview. I literally used to walk to and back from work every single day, and let me tell you, it was pretty glorious to not have to deal with the CTA. It was during one of those morning walks to the office a few years ago that I first noticed the signage for Lark going up. The space had previously been occupied by some generic Boystown bar that served forgettable food and watered down cocktails, so I was very excited to see what this new development might bring. And as you can see from my original... um... I mean Brandy's original review of the place, I was pretty smitten with their simple, yet flavorful food, especially their wood fired pizzas.

Flash forward to today and Lark is now a staple of the neighborhood, hosting themed brunches every weekend and all kinds of trivia nights and viewing parties during the week. The restaurant recently underwent a few updates, so I happily accepted their invitation to come in and see what kind of changes they'd made. 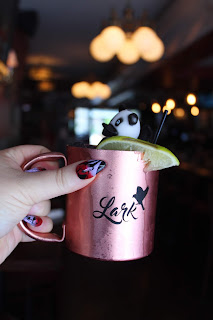 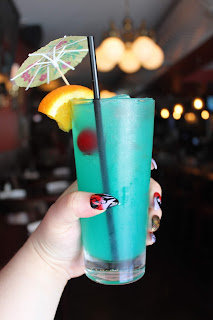 Although they have a drop dead gorgeous patio, the day we stopped in (I took along my friend Jenna) was pretty warm, so I opted to stay inside and enjoy the AC. Their new drink menu sections off all the cocktails by spirit. I loved this sort of set up, as it enabled me to quickly narrow down what I was in the mood for. I went for the Monotonous Lark, a cocktail from the "Tiki" section of the menu, that combined coconut rum, blue Curacao, pineapple, and vodka. I love a good tropical blue drink. Jenna went for the El Diablo Duck Mule, which was made with tequila instead of vodka, mixed with ginger beer, lime, and cream de cassis. The mule even came adorned with an adorable rubber ducky painted like a panda, and we were informed that the restaurant had an infinite supply of different designer ducks to float atop their drinks. They even had special ducks in lederhosen ready to go for Oktoberfest. Too cute!

I insisted that we start off with one the house signature wood fired pizzas, so we went with the prosciutto, arugula, and mozzarella. The crust was just as crisp and chewy as I remembered, with the slightest hint of char on the edges. This particular pizza's mix of salty, peppery, and creamy flavors was right up my alley, and the little finishing drizzle of truffle oil sure didn't hurt anything. 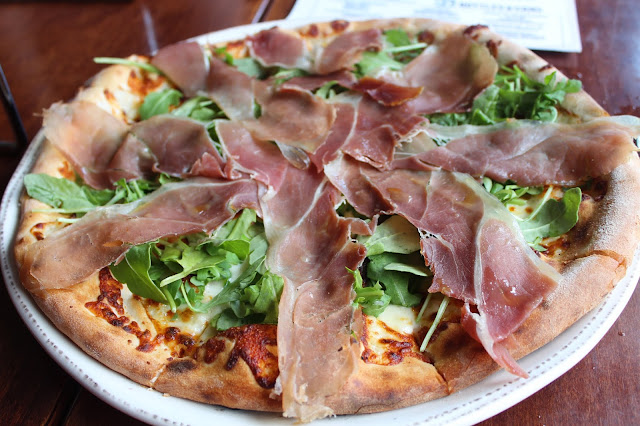 For her entree, Jenna wanted the Chilaquiles, which turned out to be a re-worked version of the Breakfast Nachos from Lark's original menu. It still resembles the nachos more than a traditional chilaquiles, which are generally prepared more as a hash, but I wasn't about to complain. The chips were nicely crisp, which made it easy to scoop up the mountain of toppings. Jenna had chosen to add some chicken to hers, which was a perfect addition to the zesty guac, spicy green salsa, scrambled eggs, pickled peppers, and streams of sour cream. I may have stolen a few bites from her plate, not gonna lie. 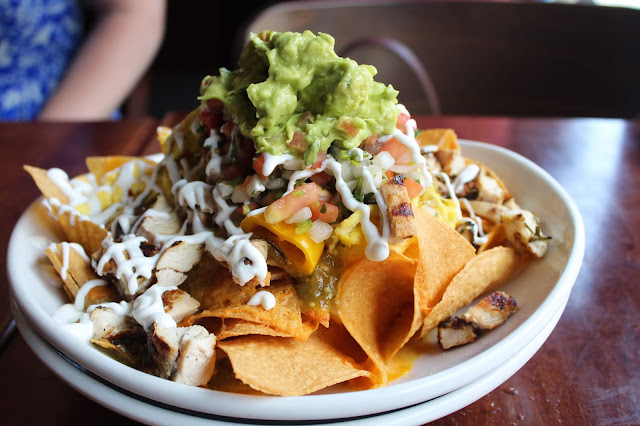 I decided to try the Recovery Burger. This burger was a pretty traditional stack, with cheddar, bacon, tomato, lettuce, a fried egg, and an onion ring, but everything was prepared exceptionally well. The onion ring added a very nice crunch to the whole thing that I really enjoyed. The only aspect I was a little confused by was that I had been asked how I preferred my meat cooked, to which I responded, "medium rare." But as we found out later, these burgers are always cooked as "smash burgers," that is to say, they are smashed on the griddle so that they develop a slight crisp on the outside. Since smash burgers are typically thinner, I'm not sure how they intended to cook mine medium rare, but I was perfectly happy with the result regardless. 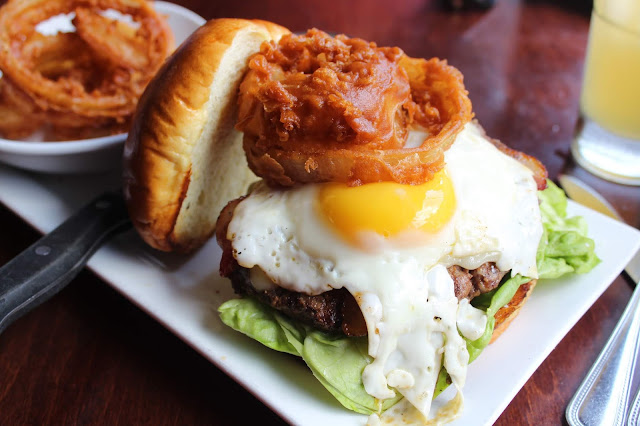 Finally, the restaurant surprised us by bringing out one of their signature desserts: a S'mores Pizza. Using the same wood fired oven, they had topped their Neapolitan-style crust with Ghirardelli chocolate chunks, mini marshmallows, chocolate syrup, and crumbled graham crackers to create the ultimate campfire fantasy. Just looking at this thing brought a smile to my face, and the smell of the toasted marshmallows nearly hypnotized me. Though the crust was pretty light and airy, the whole thing was so rich that we could barely finish a slice each. I highly advise bringing along some friends to help you down this sucker. 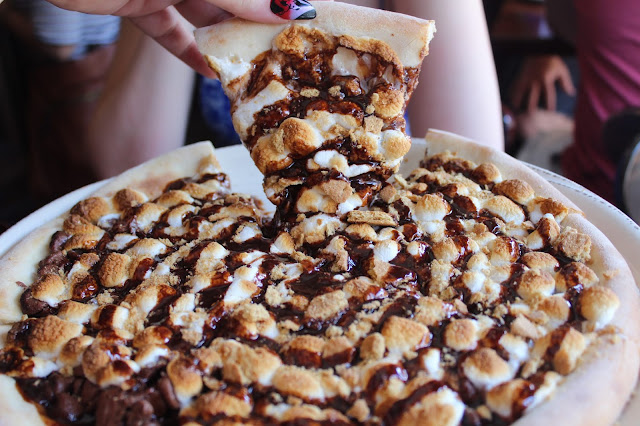 All in all, I'm very glad to see that Lark is still operating to the high standards they were when I first visited them all those years ago. Though I may not live in Lakeview any more, I'd be more than willing to once more take the journey south from my current home in Rogers Park to visit with Lark and slowly work my way through every single one of their cocktails.
Posted by Bunny and Brandy at 1:36 PM