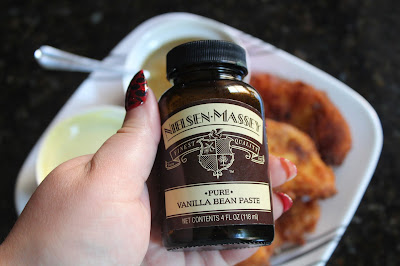 I'm kind of obsessed with Nielsen-Massey's Vanilla Bean Paste. I mean, actually obsessed. Sometimes I take the bottle out of my cabinet just so that I can open it and smell it, like it's cologne left by an ex-boyfriend. If I could pour this stuff into a diffuser and make my whole house smell like vanilla, I would. If I soak my hair in it, I would. It's not the same smell as vanilla extract, which is usually great at the front, but has that sharp alcohol bite on the tail end of the scent. The paste smells like you've just walked into a bakery owned by a beautiful French pastry chef who just happens to be single and just happens to be a former underwear model. 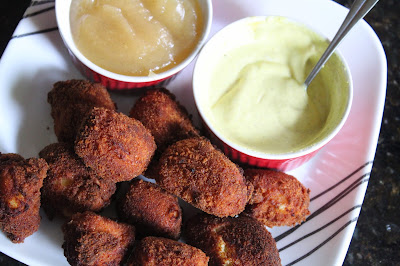 Although the vanilla bean paste is my go to flavoring agent for baked goods and desserts, I've always wanted to try using it in a savory context. Imagine that same French pastry chef decided to open a gastro pub next door to the bakery. Same amazing flavors, whole new environment. That's what I wanted to try. 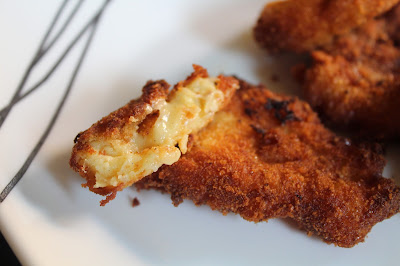 I'd heard of people mixing vanilla into mashed potatoes before, so that seemed like a good place to start. I whipped up a simple batch, using red potatoes to make the mash extra smooth. I actually really liked using vanilla in this sort of way because it made the potatoes seem even more creamy and decadent, even though I hadn't added any cream (like I normally do when making mashed potatoes). The slightly floral flavor really added a depth and a certain je ne sais quoi to the spuds. While they were good with the vanilla added in, but they weren't going to be stealing any spot lights. So I decided to transform them into croquettes.

Now, the first time I attempted to do this, I used the potatoes chilled. Because they were extra creamy, I had a really hard time getting them coated in breading, and they turned out a bit bigger and flatter than I would have liked, almost like chicken cutlets. However, they tasted fantastic, with a lightly crisp exterior and a super creamy interior. Another downside was that they were rather delicate and could only be eaten with a knife and fork. I wanted finger food. So I made a second batch of the potato mixture and froze it. This resulted in the croquettes of my dreams! Crispy outside, impossibly creamy interior, infinitely snackable.

To serve alongside the croquettes, I wanted some dipping sauces that were a little sweet and a little savory, but I also wanted to highlight the vanilla flavor at the heart of these magic nuggets. I tried a simple combo of sour cream, yellow curry sauce, and a bit more vanilla paste for my savory sauce. This was the right way to go, as the curry and vanilla made delicious friends, while the sour cream and potato made for a classic flavor combo. For a touch of sweet, I whipped up some home made applesauce (I used this recipe as a base, but subbed out the cinnamon for...you guessed it... more vanilla). The overall combo of these two sauces could not have been better, and I loved that the potato+applesauce+sour cream medley gave off a kind of potato latke vibe.

Check out my final recipe below and then head on over to the Bunny and Brandy Instagram page to find out how to win some fabulous Nielsen-Massey Vanilla Bean Paste for your own sweet and savory experimenting! 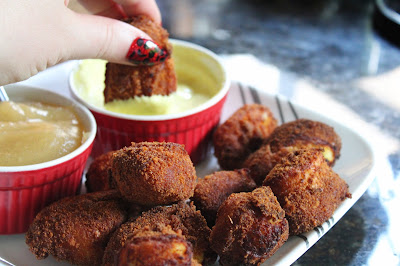 Place the potatoes in a pot of water, making sure they are completely covered, and bring up to a boil. Cook for 20 minutes, or until the potatoes are tender all the way through. Drain and cool slightly.

Transfer the potatoes back into the pot. Cut the butter into small pieces and add to the potatoes and vanilla bean paste. Use a stick blender to puree the potatoes until completely smooth. Let the potatoes cool to room temperature. Add in the egg yolks and flour, combine well, and then transfer the mixture into a lidded freezer safe bowl. Freeze the potato mixture for 1-2 hours, or until they achieve an ice cream-like consistency.

Heat frying oil on medium high in a deep pan. Set up a breading station with the eggs scrambled in one dish and the bread crumbs in a second dish. Scoop the potato mixture into the 2-3 inch balls (a small trigger action ice cream scoop or melon baller works well for this, but a large spoon can also be used). Drop the balls into the egg mixture, then transfer to the bread crumbs and coat thoroughly. Repeat this process so that the balls have a double layer of coating.

Add no more than 5-6 balls into the oil at a time and watch them carefully. They will brown quickly and only need to cook for a minute or so on each side. Once the croquettes are browned evenly on all sides, transfer them to a paper towel covered plate to drain any excess oil.

Serve immediately.
Posted by Bunny and Brandy at 11:37 AM