The Blanchard or Sunday in the Park with Brandy 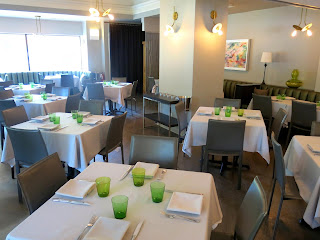 It was a quiet Sunday morning and Brandy was sitting on a bench, feeding pigeons with crumbs from her day old scones. Across the way, she spotted an intriguing figure, also seated on a bench, but uninterested in the pigeons. The woman was dressed all in black, from her skin tight leggings, to her long sleeved turtle neck, to the beret that sat jauntily atop her mop of flaming red hair. In one hand, she held a cigarette, which was trailing a thin stream of smoke into the wind, and the other hand held a paperback copy of The Stranger in front of her face. "That's a lovely book," Brandy called to the woman, "Though I do think the narrator gets a bit pouty at times." The woman lowered her book and took a long drag of her cigarette. "You're a fan of French existentialism?" she asked. "I was in my youth, but as I got older, I learned to stop brooding so much and just enjoy myself." "I envy you, mon amie. With the state of the world these days, I find little time for anything but worry." "Understandable. I worry too, sometimes, but then I just head out for some sunshine and a good meal and that normally does a great deal of good for my state of mind." "And what do you suggest for someone who is eternally trapped in the black and unrelenting prison that is their own mind?" Brandy paused to think, throwing a handful of crumbs to the pigeons. "A stiff drink," she said at last, "And I don't mean that frivolously. Often, I find the way out of a sticky situation is to do something I find uncomfortable in order to change my way of thinking, and that means a little bravery is needed. When the will isn't strong enough on its own, a decent dose of liquid courage can help. What makes you uncomfortable, friend?" "Happiness," drawled the stranger reading The Stranger. "Well, let's find a way to make you uncomfortably happy," said Brandy. 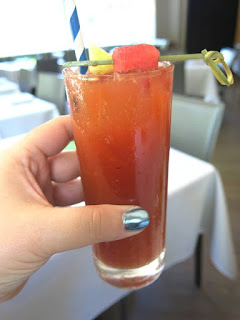 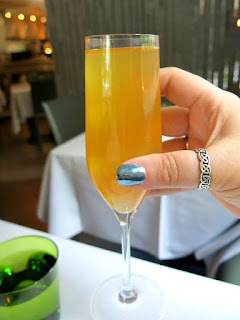 Seeing as how they just happened to be right outside the venerable bastion of French fusion cuisine known at The Blanchard, Brandy asked her new friend to join her for a meal. The woman, as it turned out, was named Blette Bleunoir, and though her dower continence remained, she accepted Brandy's invitation with a nonchalant shrug of her shoulders.

The Blanchard's classic style and open floor plan put them at ease right away, as did the soft, icy blue color scheme.

Taking a page from her own book, Brandy picked up the cocktail menu straight off and ordered the Lady Dynamite Mimosa, a turn on the classic brunch cocktail that included encapsulated bubbles of yuzu juice. Brandy found that the cocktail had a lovely, sophisticated flavor to it that had a soft vanilla finish and pops of extreme brightness from the yuzu that really woke up the palette. Blette went for the house Bloody Mary, which was surprisingly made with a watermelon gazpacho base and a cucumber infused liquor. Blette very much enjoyed the mix of sweet and refreshing flavors that really set this drink apart from other bloodys, but the fact that the spices were still present meant that the cocktail hadn't strayed too far from the shaker. In fact, this cocktail was so unique that Brandy ended up ordering her own, making this only the second bloody mary in history that Brandy enjoyed enough to finish a whole glass of.

Blette allowed Brandy to order them a couple of starters to set the tone of the morning; the Oeufs à la Yvettes “Egg Tart” and the Grilled Spanish Octopus. Octopus is something that pushes Brandy's comfort levels, as she usually convinces herself that she doesn't like it, but almost always enjoys it once she's had it, so she thought it was more than appropriate for demonstrating her point to Blette. From the moment this dish hit the table, Brandy didn't need any convincing. Beautifully plated and accompanied by some charred kumquats and fire roasted salsiy, the octopus was so tender and succulent that it barely needed to be cut with a knife. The char on the meat itself brought a lovely note of wood smoke and a subtle hit of chili spice kept each bite surprising, as did the little sour punch from the kumquats. The egg tart, in contrast, was much more subtle, with a rich buttery crust and a silky interior that simply melted away on the tongue. The poached shrimp on the top was so tender and perfectly cooked that Brandy and Blette found themselves in a silent battle over the last piece of it. 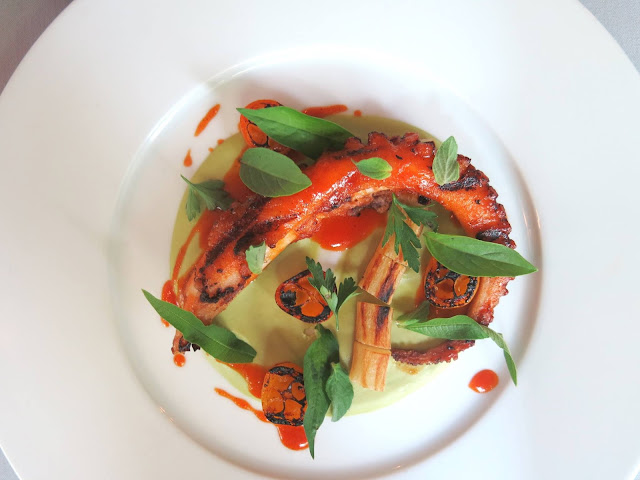 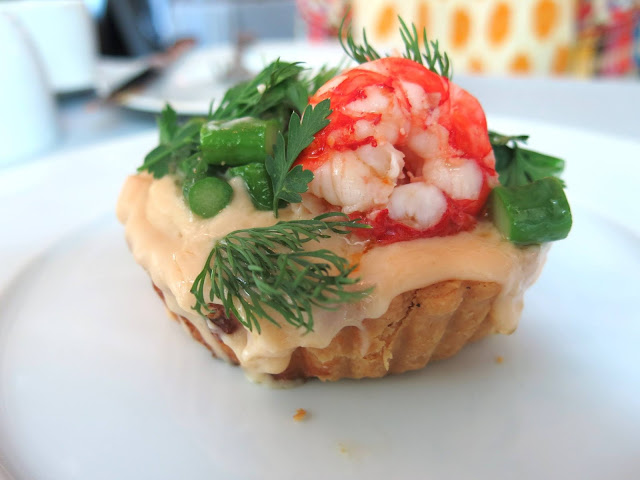 Blette, challenged to order something that would invoke feelings of happiness, warmth, and comfort, asked for the Croque Madame as her entree. The classic breakfast dish featured a good slab of smoked Nueskes ham with melty Gruyère and came smothered with morney sauce, which was then brûléed, and topped with a perfect over medium egg. Brandy detected the slightest hint of a smile forming on Blette's mouth as she took bite after bite of the cheesy, meaty dish. "This reminds me of my mother," she said at one point. "Did your mother used to make this for you?" Brandy asked. "No, my mother didn't cook," Blette replied, "But just as everything here is in perfect balance and nothing is over powering anything else, so too was the balance my mother tried to maintain between all fifteen of us in the family." "Goodness, you had a lot of siblings!" "No, mon amie, I am an only child. It was my parents and I and a dozen French bulldogs." 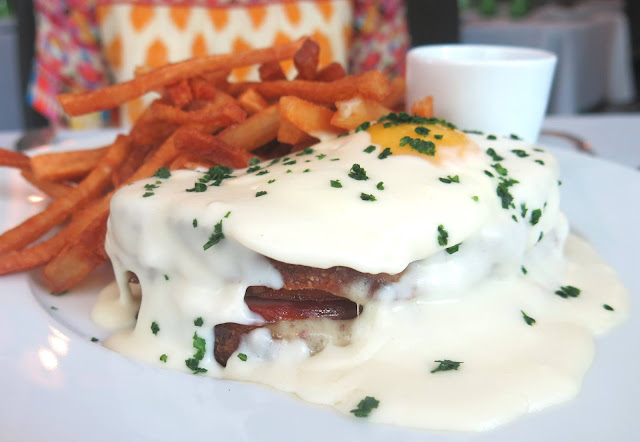 Brandy, stepping firmly into her comfort zone for her entree, ordered the Blanchard Burger. The sheer size of the thing was actually quite intimidating, but after one bite of that juicy, flavorful burger, Brandy was filled with joy that she would be able to make this particular dining experience last. The meat was perfectly cooked and had been topped with ooey gooey butterkase cheese, shallot confit, a creamy garlic aioli, and a thick hunk of bacon. The bun was soft enough that it didn't overwhelm everything else, but still had enough structure to convey the burger to one's mouth without loosing so much as a drip of cheese. Brandy rather appreciated that the burger came served with a few tiny cornichon pickles, which served to cleanse the palate every few bites. The garlic aioli was the thing that imparted the most flavor into the burger, but Brandy has yet to turn her nose up at anything with a heavy garlic flavor. 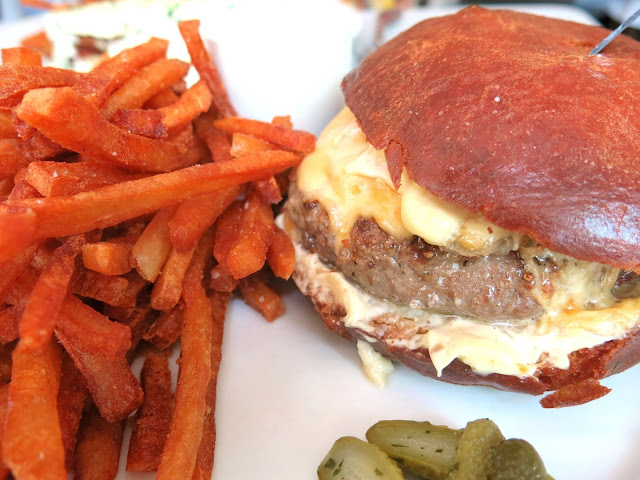 Lastly, the two ladies combined for a little sweet and savory experiment, ordering the Citrus Zest Crepes for dessert, but adding some seared foie gras to top them off. The result was indeed a very unique experience, between the eggy crepes, the rum spiced caramelized banana filling, and the rich and buttery foie. Blette thought the combination worked rather well texture wise, while Brandy really liked the way the vanilla flavor that had been infused into the bananas carried over to the rest of the dish. "Normally, combining sweet and savory elements makes me quite anxious, but I'm glad we tried this," said Blette. "Oh darling, sweet and savory are what I live my life by," Brandy replied. 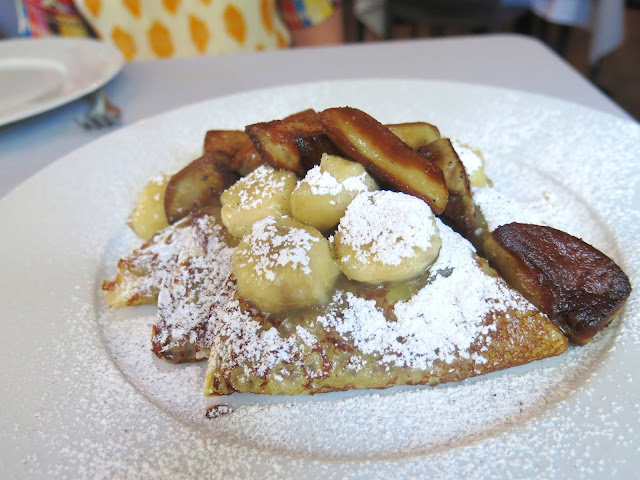 The Blanchard made quite the impression on Brandy with their stunning presentation, their creative turns on classic recipes, and most of all with the incredible value of the dishes (most were under $20 a plate) when the portion sizes and the quality of the ingredients were put into consideration. The service had also been extremely helpful, as Brandy had relied heavily on some of their waitress's recommendations, meaning this brunch was darn near perfection in Brandy's mind. "Well, mon amie," sighed Blette as she adjusted her beret, "If I may say so, it was a very good thing that we came across each other this morning." "Are you saying you are happy you met me?" Brandy grinned, her eyebrow raised. "I suppose," Blette drawled. "Does it still make you uncomfortable to be happy?" asked Brandy. Blette considered this for a moment. "Yes," she replied, "But luckily, happiness is fleeting. Soon, I'll be right back to feeling comfortably melancholic." "A few more of these watermelon bloody mary's and you'll be able to stave that off for at least the rest of the afternoon," said Brandy. 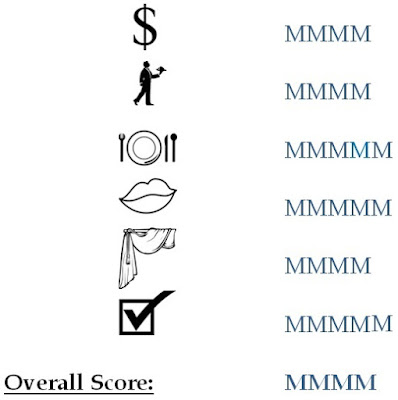