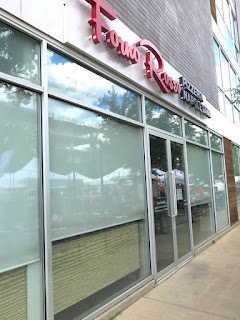 It's not an uncommon site to see Brandy sitting at the counter of her local tea shop, sipping on the latest exotic blend in order to determine whether or not she needs to buy a bag's worth to add to her tea chest. It was one of these typical late mornings that a mysterious stranger wandered into the tea shop and took the seat beside Brandy. They smiled politely at each other. They eyed each other's cups of tea. Then, just as Brandy was about to finish off her last sip, the stranger reached out with a bejeweled hand and snagged the cup. "Interesting," the stranger intoned in a soft voice, "I see that you are about to take a trip across the city." "Are you reading my tea leaves?" Brandy asked. The mysterious woman smiled, slyly. "Of course," she said. "What rubbish," Brandy scoffed, "I don't believe in any of that heebee jeebee nonsense." "I also see here that you are a great lover of food," said the woman. Brandy rolled her eyes. "And that you are about to eat one of the best pancakes you've ever had." This caught Brandy's attention. "Really? Where?" "I'm not sure," said the woman, squinting, "I see pizza paddles and a bar and... that's odd. A pizzeria? Why would a pizzeria be serving pancakes?" "Ah... I think I know where that is. Would you care to join me?" "It would be my pleasure." 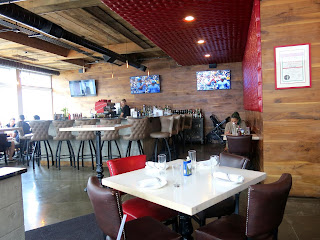 The stranger, as it turned out, was a woman by the name of Belladonna Blabrun, who made her living in the acquisition and sale of fine healing crystals and all natural tinctures. Brandy was still skeptical about her purported clairvoyant skills, but she was intrigued, as the woman's clues about the restaurant with the pizza paddle led them to Forno Rosso in the West Loop, an up scale pizzeria that had recently started a rather unique brunch service. "I'm not sure about those tea leaves predicting a legendary pancake, but I suppose anything is possible," Brandy said. 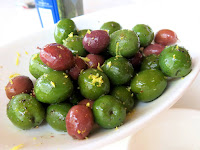 With all of the pricey, upscale restaurants in the area, Forno Rosso felt welcoming and unpretentious in comparison. The windows that surrounded the dining area made everything feel open and breezy, while the mix of reds and browns in the interior gave a cosy, rustic impression. 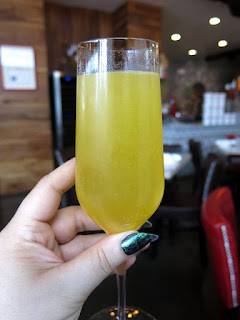 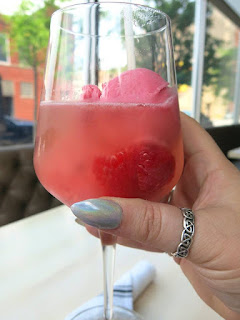 Right away, Belladonna and Brandy spied some promising items on the cocktail menu. Belladonna went with the Grand Mimosa, which was a traditional mimosa with the addition of some raspberry peach liqueur. While the mimosa did taste a bit sweeter than a typical mimosa, it just wasn't quite unique enough to catch Brandy's full attention. Instead, she went with the F'rosé, a whimsical concoction of rosé and raspberry sorbet. Though not normally the type of brunch cocktail Brandy gravitates towards, she found that she rather liked this outlandish pink drink and thought that it was utterly perfect for summer.

Belladonna and Brandy decided to start with a pair of savory shareable plates, accompanied by a bowl of roasted olives for snacking. First up was the Burrata Avocado Toast. Normally, Brandy is a little put off by avocado toast ("It's a lovely dish, but it's usually under seasoned and over priced," she says) but the addition of burrata straight from Italy seemed to set this one apart. Indeed, the silky, creamy cheese did add some pizzazz to the foundation of avocado and focaccia. Belladonna liked the halved cherry tomatoes as well, which added a much needed brightness to each bite. Next, they shared the Breakfast Pizza, a show piece for the restaurant's wood fired Neapolitan style crust. The pizza came topped with fresh mozzarella, scrambled eggs, more cherry tomatoes, and grilled asparagus. Brandy found the toppings to be in perfect balance, providing just enough vegetation to keep it light and enough cheese to keep it satisfying, while the crust had a brilliant chew and char to it. 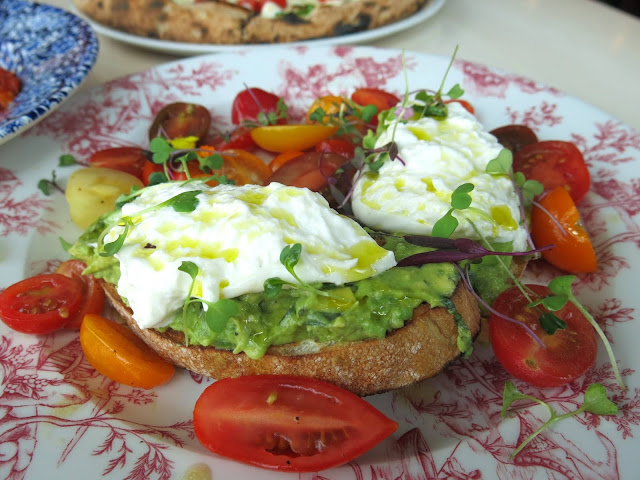 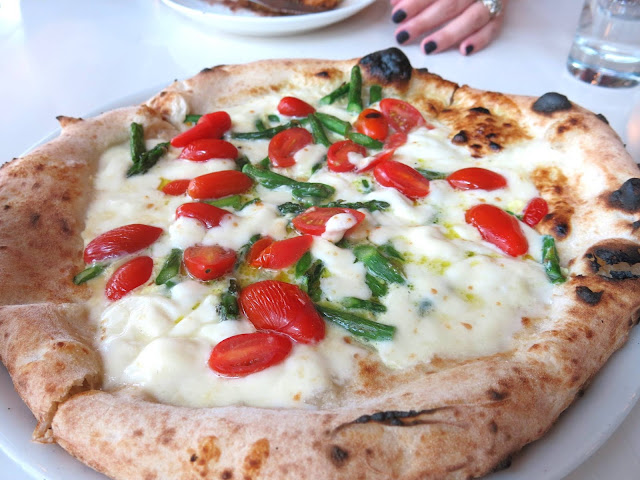 Next, they moved on to a pair of eggy entrees; the Prosciutto Frittata and the Eggs in Purgatory. Belladonna very much enjoyed the Eggs in Purgatory, which consisted of three eggs poached in a slightly spicy tomato sauce that was so delicious and deeply flavorful that she couldn't resist scooping up forkfuls of it even after the eggs were gone. Brandy found her frittata to be a little on the salty side and a little dry, but otherwise quite good. It had a fluffy texture to it, which contrasted well with the pieces of mushroom scattered throughout it. 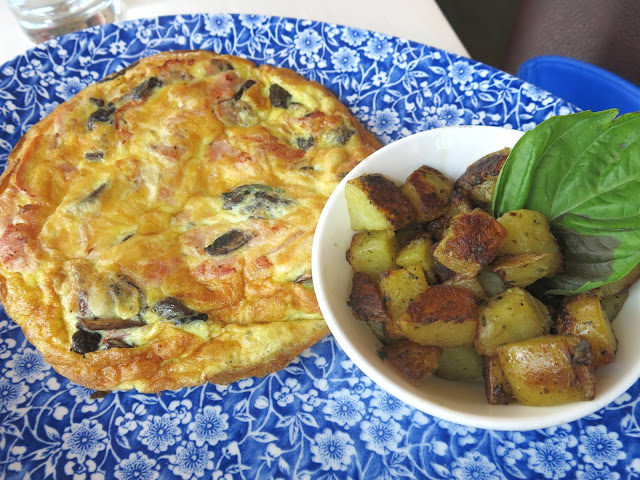 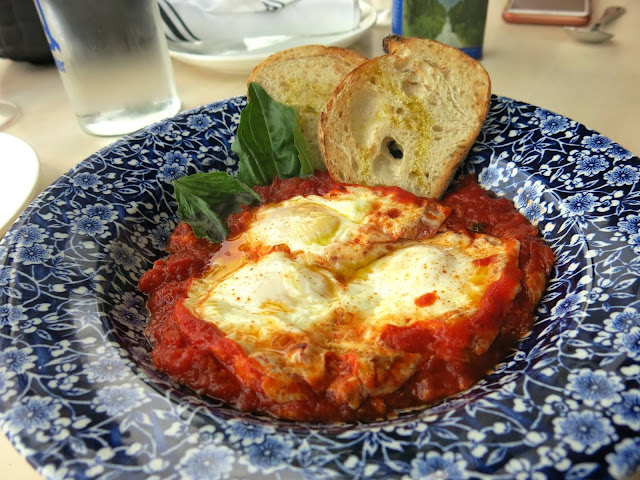 Finally, they ended their meal with a pair of sweet dishes: The Nutella French Toast and, of course, the fabled Wood Fired Pancake. The French toast had an excellent texture that was at once soft and chewy, but still held together under the weight of all the toppings. The Nutella made the dish down right decadent, while the bananas helped to elevate it from a sweet dessert to a true breakfast item. The pancake, though, was the star of the morning. Existing in the nebulous space between flapjack and Dutch Baby, this pancake came served in a skillet, puffed to perfection in the same wood oven the pizzas were cooked in, and topped with whipped cream and marinated cherries. The texture was almost creamy on the interior, making it very unique, and the cherries had just the right amount of tartness and sweetness to really elevate the flavor. "I've never had anything quite like this!" exclaimed Belladonna. "Surprisingly, neither have I," said Brandy, "Now this little dish truly is magic." 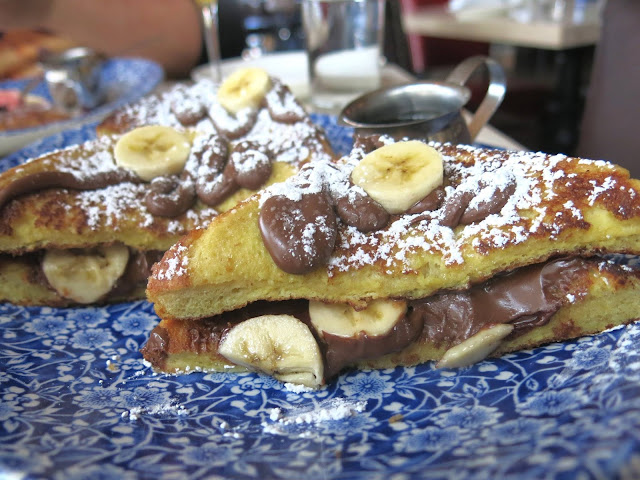 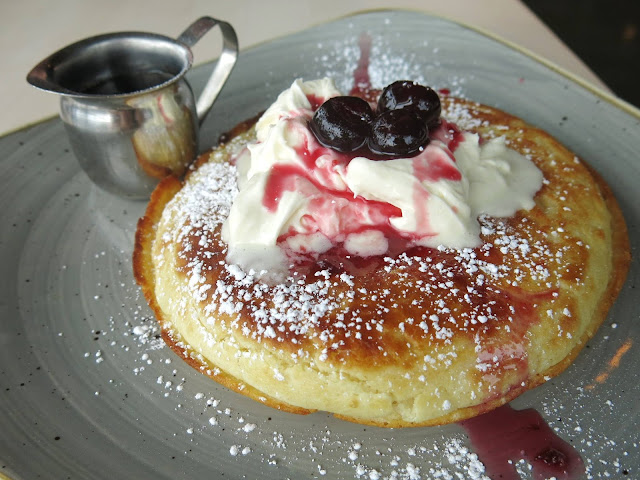 Brandy was very pleased to have discovered a such a casual brunch in the West Loop, but one that was still full or surprises and ingredients of excellent quality. Oddly, the dishware was worth taking special note of, as it's bright colors and retro patterns really did help to invoke the feeling of being served in the kitchen of a Neapolitan grandma. "Praise Mother Earth, am I glad I decided to read your tea leaves," Belladonna said to Brandy, "I've never experienced a meal quite like that one in all my years." "Stick with me, sweetheart, and you'll see all kinds of indulgent brunches in your future," Brandy winked.

The writers of this blog were invited by the restaurant to dine for free in exchange for an honest review. 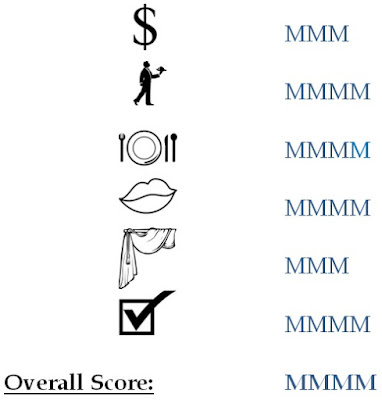