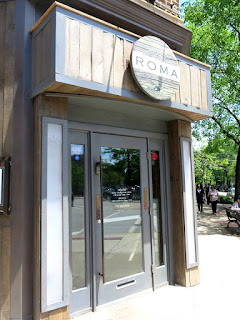 It was a normal day until Brandy met the lion tamer. She had been wandering around the Randolph Street Market, browsing for antique wine racks and vintage lace doilies when she came across a rather imposing figure. They wore a tailored suit and an old fashioned coat that had tails draping down to their ankles. Their white gloved hands were clasped tightly behind their back. On their head rested a red satin top hat. But none of these visuals were what caught Brandy's eye. Indeed, what she had first noticed was the short whip in the figure's hand. "Using that for price negotiations, eh?" she commented to the person. They raised a dark eyebrow at her. "I, mam, am a professional lion tamer," they said, "And this is simply a tool of my trade." "Oh," said Brandy, "You're on pest control duty then?" "No mam. I simply do not care to leave my home without my instrument. It is an extension of myself. Besides, one never knows when it might come in handy." 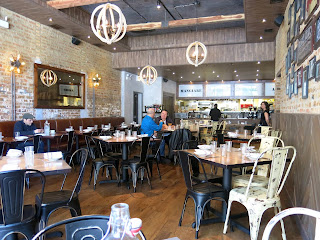 This intriguing figure, it turned out, went by the name of Bucatini Bianco. Brandy and Bucatini wandered up and down the festival for an hour or so, chatting about their individual adventurous lives until Brandy had an idea. "Say," she said, "Would you like to grab a bit of brunch with me? There's a lovely Italian restaurant up in Andersonville I've been wanting to sample and I think you might enjoy it." Bucatini agreed with a short nod and the two headed off with their arms full of various treasures from the market.

Bar Roma in Andersonville was their destination, and they arrived to find a warm and rustic feeling U shaped space, laden with brick, aged woods, and antiqued metals. Even though the design utilized dark colors, the windows at the front of both sides of the dining room brought plenty of light into the space, making it feel more open and breezy. 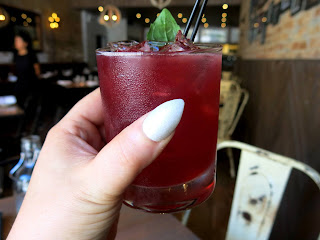 Brandy began her meal with a Pomegranate Basil Smash, a delightfully sweet, slightly tart, and herbaceous drink that tasted like a summer day spent sitting in the middle of a garden. Bucatini went with a simple belini, which was light, crisp, and fresh tasting.

To snack on while they plotted out the rest of their meal, Brandy ordered them the Colazione di Straciatella, which consisted of grilled green grapes, some rustic toasted crostini, and an impossibly creamy Straciatella cheese (which sort of resembled the inside of burrata), drizzled with honey and some balsamic vinegar. The combination of such simple, but high quality ingredients was utterly delightful, with bursts of sweet, salty, and milky flavors coming in every bite. "There is no taming my taste buds now!" Bucatini chuckled, cracking their whip off the to side of the table. 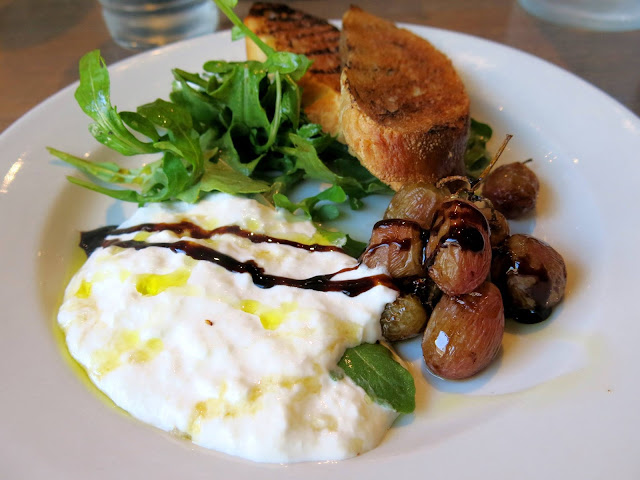 Next, they shared a plate of Maritozzi con la Panna, an Italian style French toast, coated with almonds and stuffed with a banana, mascarpone cream and served with a side of bacon. Brandy thought the flavor of the toast was spot on, with a decent custard like interior to it and a wonderful crunch from the almond coating. The banana helped quite a bit to break through the sweetness and egginess, while the bacon served as a salty palate cleanser between sugary bites. 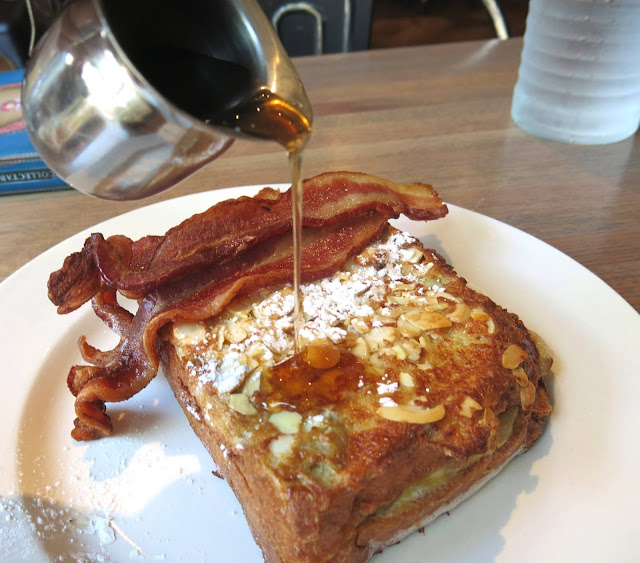 For their entree, Bucatini selected the Torticcio alla Trastevere, which Brandy took to be an Italian twist on a chilaquiles. At the base of the dish was crispy tortillas smothered in a tomato-chipotle sauce and then topped with smoky pork belly, avocado, and ricotta salata. Bucatini was immediately impressed that the tortillas remained crispy under the weight of all the toppings, which gave a nice textural contrast to some of the softer elements of the dish. The pork belly was a real standout, with it's succulent and smokey nature, while the sauce provided a bright and rich tomatoiness that actually lightened up some of the heavier flavors. "If I was eating this at home, be sure that the lions would have nothing to lick from the plate!" guffawed Bucatini, making Brandy wonder if they were implying that they actually kept lions as pets. 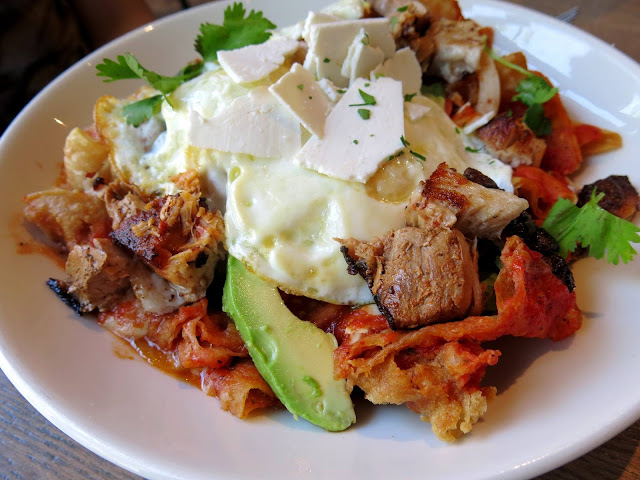 Brandy, never able to resist a plate full of carbs for breakfast, ordered the Rigatoni alla Carbonara. The rough cracked black pepper that was sprinkled across the plate meant that every bite had a thrilling sense of danger to it that Brandy rather enjoyed. The pasta had been cooked well, but Brandy found herself thinking that she preferred the more traditional spaghetti to the rigatoni, if only because the little tubes didn't hold onto the sauce or the cheese as well as she would have liked. The bacon in the dish lent a good amount of flavor, but didn't overwhelm everything else. 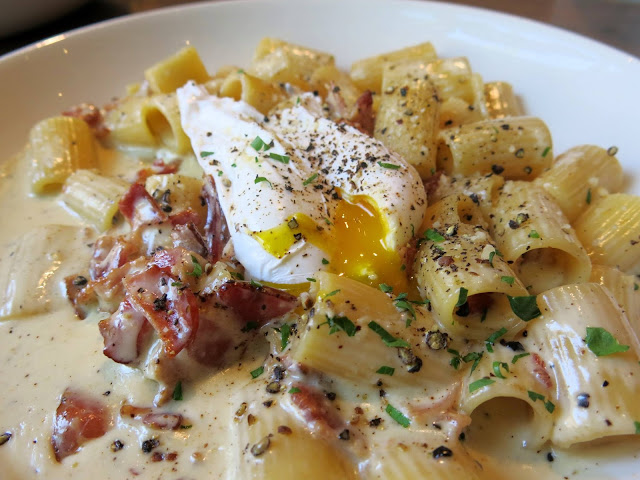 Finally, they both ended their meal with a little dessert. Brandy chose the Affogato, which was simple, perfect, and satisfying. "I only discovered the joys of an affogato a few years ago," said Brandy, "but they have become one of my favorite things. There is nothing quite as pleasing as pouring a dark, rich espresso over a bowl of ice cream." Bucatini had picked the Panna Cotta, which came with a salted caramel sauce and fresh berries. They giggled with delight at the jiggly little sweet, which was dotted with a galaxy of vanilla beans. The panna cotta it self was extremely light, as if it had been made with whipped cream, and had a very pronounced coffee flavor. Bucatini especially liked that the caramel sauce contained small bits of sea salt for a little bit of crunch and an extra burst of flavor. 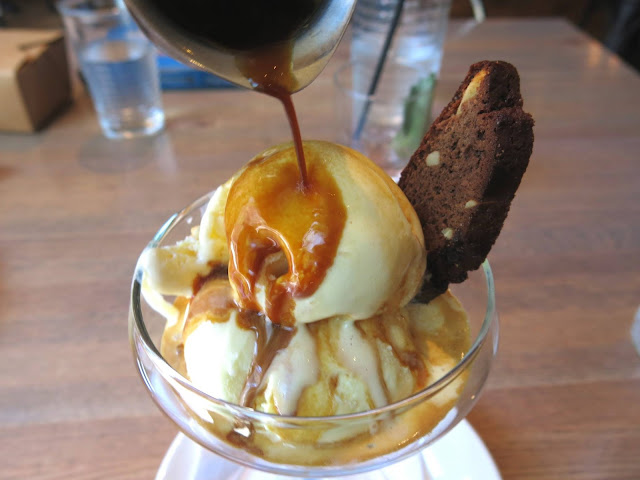 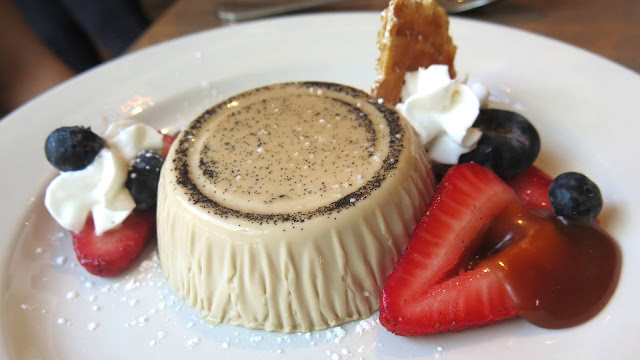 Several hours after first meeting Bucatini, Brandy had learned more about lion taming than she ever thought she would need to know, and she felt her life was somehow enriched because of it. Bucatini, in turn, had a much more comprehensive knowledge of brunch by the end of their meal. "I never thought that the combination of sweet and savory flavors could be so important," said Bucatini in wonder. "And I never knew lions were such quirky creatures," Brandy replied, "How on earth to do you fit five of them into your home?" "Oh, they are rare miniature lions. Only about 10 pounds each." It was only then that Brandy began to suspect in earnest that Bucatini may have been, in actuality, a skilled and formidable house cat tamer. 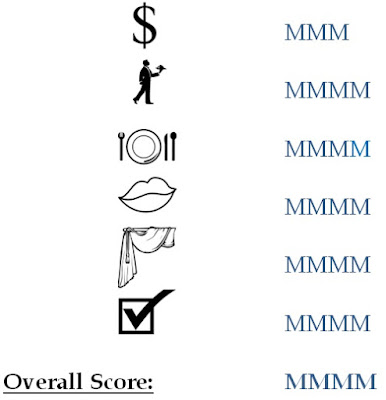