From the Kitchens of Bunny and Brandy: Loaded Baked Potato Pierogies 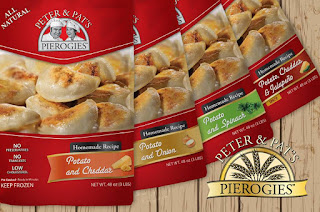 As evidenced as recently as last fall, Brandy has quite an affinity for dumplings, but one of her all time favorites is pieogies. Pierogies, like most dumpling type foods, are incredibly versatile and can be filled with any number of savory, sweet, vegetarian, or carnivorous fillings. They can be crisp and chewy or soft and supple, they can be served simply with a little butter or made elaborate with as many toppings and sauces as can be imagined. But best of all, pierogies, unlike some of their other dumpling brethren, can actually be quite filling and hearty. 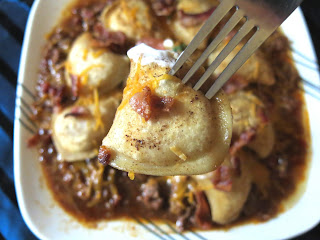 Brandy recently stumbled upon something new while browsing the isles of Costco; Peter and Pat's 4 Cheese potato Pierogies. "Hmmm...," Brandy mused to herself, "So many possibilities..." Once she got the bag home, Brandy set a few to boil and then briefly sauted them in some butter to see how they tasted on their own. She found the outer skin crisped up perfectly and still retained a good bit of chew to it. The inside of the pierogie was impossibly smooth with a subtle salty cheese flavor that really surprised Brandy with it's sophistication. "Reminds me a bit of a classic twice baked potato," she decided, and that was when an idea struck her. "I could turn these things into the ultimate loaded baked potato bites!"

For this preparation, Brandy decided to give the pierogies a quick boil (just about 5 minutes or so) and then crisped them on both sides in a little bit of bacon fat. To bring her dream of a loaded backed potato pierogie plate to fruition, she started by heating up some Texas style chili (Brandy used this recipe as a base, but any old chili is perfectly acceptable). She then sprinkled a good amount of shredded cheddar over the piping hot chili. Next, she placed the crisped pierogies onto the bed of chili in a circular pattern and sprinkled on even more cheese. Then, she added a generous dollop of sour cream to the center of the circle and topped that with some freshly cut chives. Lastly, Brandy crumbled up some bacon (the same bacon she'd used earlier to render the fat she'd cooked the pierogies in) and sprinkled that over the entire plate. At last, her masterpiece was complete. 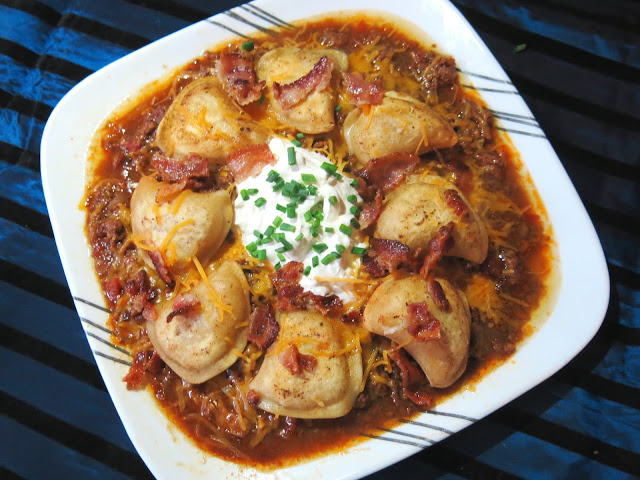 The writers of this blog were sent product free of charge in order to facilitate the writing of this post.