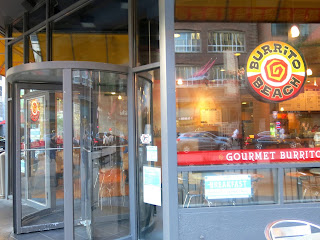 Now that the fall weather has started to settle in, Brandy has been coming out of her humidity imposed exile and doing a bit more walking about these days.  She loves a good walk, whether its down by the lake front, through the latest fashionable food hall, or best of all, on the bustling streets of downtown.  "There's nothing quite like a relaxing stroll through the city, listening to the conversations of passersby, helping confused tourists, doing a little window shopping, and petting lots of doggies out for their own evening constitutional," as Brandy explains. 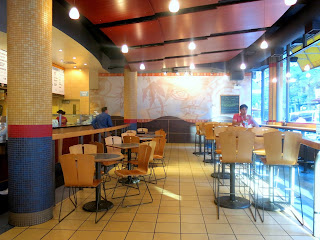 One of a her recent walks took her past a corner in Streeterville she had been by many times, but hadn't taken much notice of until now.  There Burrito Beach, a fast casual Mexican restaurant, stood proudly, proclaiming its menu included fresh and healthy dishes along side gourmet signature burritos.  "I've always been rather skeptical of these burrito type places," said Brandy, "But seeing as how this one is Chicago based, perhaps its worth a shot.  It also just happens to be the brunching hour!" 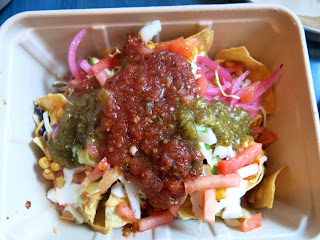 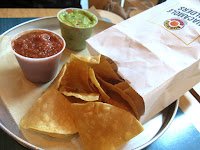 The meal started off with traditional chips and guacamole.  These chips, however, were rather special, as they had been made in house and fried fresh for a crispy texture and true corn flavor.  Along with the guac, there was a nice abundance of salsas of varying heat levels to cater to every tolerance level.  This mix of salsas also came into play in the Loaded Nachos, using the same homemade chips along with char grilled chicken, various cheeses, sour cream, beans, pickled red onion, corn, and crispy cabbage.  Brandy was a big fan of these nachos, which were more loaded with veggies than cheese for a fresher version of a typically heavy dish, and she especially liked the zing the pickled onions gave to each bite. 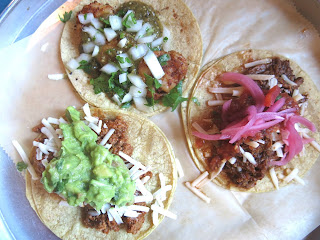 Next up, Brandy sampled a selection of tacos with shrimp, ground beef, and brisket fillings.  The corn tortillas used had a great flavor that added to the experience rather than just serving as a vessel for the taco fillings.  The shrimp was Brandy's least favorite of the three as she found the salsa served on top of it overwhelmed the flavor.  The ground beef was good with a pretty typical taco spice to it which went well with the creamy guacamole.  The brisket was Brandy's choice for the most flavorful, being tender and well spiced, with a nice little tang added by some more pickled red onions. 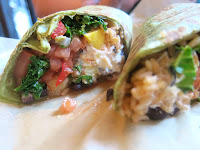 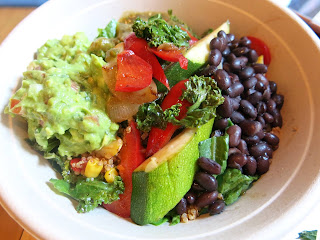 Moving on to some of the healthier options, Brandy sampled the Quinoa Salad.  This was no typical salad filled with chopped carrots and tomatoes over a bed of lettuce, but rather a bowl full of fresh and sauted veggies like corn, beans, zucchini, peppers, onions, and avocado, all combined with a organic quinoa for a delightful mix of textures.  "For such a healthy salad, I have to say that it's rather filing," Brandy commented.  Also from the healthier and vegetarian side of the menu was the Goat Cheese and Black Bean burrito.  Brandy found this burrito absolutely delicious with its mix of grilled veggies, creamy goat cheese, black beans, and wonderfully spiced red rice all wrapped up in a warm spinach tortilla.  "I would have been happy with all the veggie in here," Brandy commented, "But that creamy core of goat cheese just puts it over the top.  This is one of those vegetarian dishes that could please even the staunchest carnivore!" 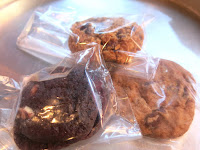 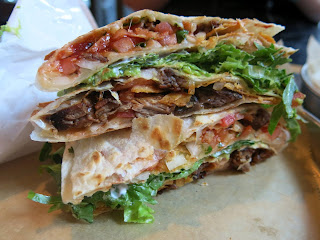 Speaking of carnivores, Brandy's last dish was the current special, an amalgamation of several Mexican favorites combined into something known at the Sirloin Steak Super Quesa-Zilla.  This crispy delight combined char grilled steak, a spicy and smokey ketchup cut with chipotle peppers, more guacamole, jack cheese, tomatoes, lettuce, and best of all, more crispy tortilla chips on the inside.  The slightly sweet and smokey ketchup really set off the steak, especially when combined with a lick of sour cream, and the fresh veggies and chips made for the perfect and most satisfying kind of crunch.  "Never mind what I said about the vegetarian burrito," said Brandy, "This is the kind of thing that would have a vegetarian questioning their life choices."  Brandy finally concluded her meal with a selection of charming, freshly baked cookies.

There were a lot of things to love about Burrito Beach, from the fact that everything was made fresh and in house to the fact that the menu was infinitely customizable, to the locally sourced, high quality ingredients and the outstanding menu prices which never seemed to go over $10 for any single item.  "This is just the kind of thing I like to see in a fast casual restaurant," said Brandy, "Proof that one doesn't need to spend pockets full of money or 2-3 hours in a sit down restaurant to enjoy good quality, healthy food."  Unfortunately, having eaten about half the menu in one sitting, as healthy as it was, seemed to have lessened Brandy's desire to continue her walk, so she packed up her left overs and hailed a cab home. 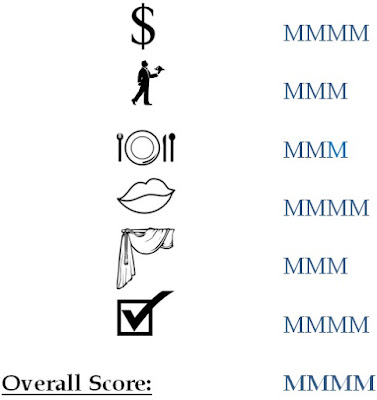