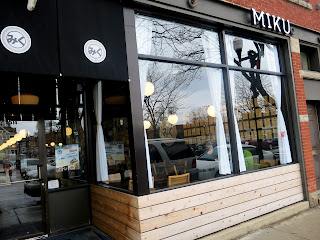 "I've been feeling rather adventurous lately," Brandy told her good friend Bailey, "Perhaps it's that Bunny has transferred a bit of her wanderlust on to me, but I've just been wanting to explore some more exciting brunch alternatives."  "Well, you know what my vote is for!" Bailey said excitedly.  Brandy grumbled.  Bailey was referring to sushi, which she had been insisting was an appropriate food item for brunch for quite some time.  "You've said yourself, if a restaurant is open on a Sunday at 11:00, its counts as brunch," Bailey reminded her friend.  "Alright fine.  We'll go to sushi for brunch.  You're lucky I'm feeling adventurous." 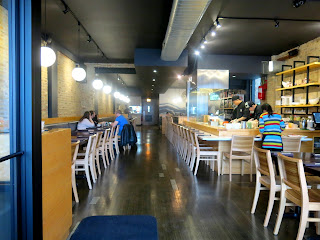 Brandy chose Miku Sushi in Lincoln Square, a traditional sushi house with an extensive menu that not only included classic and signature rolls, but also bowls of ramen, shareable skewers and small plates, and very original fusion dishes.  The interior was sleek and clean, but with a modern feel to it, using a simple color scheme of earth tones combined with red, black, and white accents.  "I also like the sea of guitar players walking by outside, headed to the school of folk music next door!" Bailey noted. 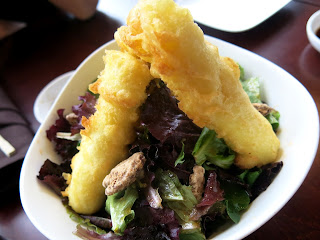 They began their meal with a rather unusual sounding appetizer; the Goat Cheese Tempura.  The fried sticks of cheese came three to an order, displayed over a small salad of greens, candied pecans, green apples, and a sweet chili lime vinaigrette.  The cheese had a nicely light and crisp exterior, but a rich and creamy interior that was best enjoyed one slow bite at a time.  The salad was a great accompaniment, the freshness of it balancing the cheese nicely.  Both ladies were rather surprised by the spicy kick of the dressing as well, but loved the way it complimented everything. 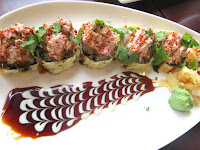 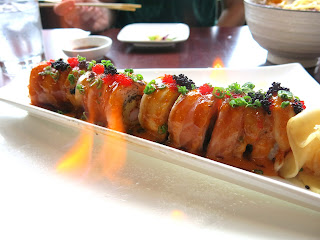 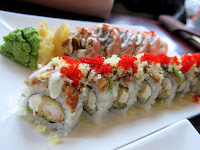 Jumping right into the sushi rolls, Brandy let Bailey take the lead with the ordering.  First to the table was the Lava Maki, a beautifully plated tempura roll filled with cream cheese, avocado, and spicy shrimp and topped with a salad of marinated shredded crab meat and herbs, resulting in a bite that was just as unique texturally as it was visually.  The Smokey Bear and the Yuri Maki were next, the former being a creamy, smokey, and sweet combination of eel, salmon, cream cheese, and cucumber with a kick from some wasabi mayo, and the latter being a crunchy and interesting combo of shrimp, green apple, cream cheese, and lots of little salty pops of tobiko.  The show stopper, however, was the Flaming Dragon, a roll so spectacular that it actually arrived to the table on fire.  Once the special effects had disappeared, the ladies were left with a rather delightful roll consisting of salmon, white tuna, tempura shrimp, and red and black tobiko.  The flavor of this roll was rich and earthy with the perfect amount of sweetness and heat to it.  "The last time I saw an entrance that dramatic, it was at a Royal Shakespeare Company performance!" laughed Brandy. 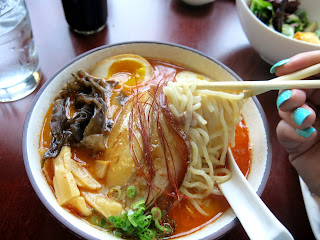 Lastly, the ladies decided to split an order of the Spicy Roasted Garlic Ramen.  The broth of the ramen was so deeply flavorful that Brandy had to stop Bailey drinking the whole bowl before they could even taste the toppings and the noodles.  Speaking of the noodles, they were an absolutely perfect texture, and the abundance of toppings, like some fatty pork belly, bamboo shoots, mushrooms, and a soy sauce soft boiled egg meant that each bite was a new adventure.  "Bailey," Brandy scolded as she slurped up some noodles, "If you don't give me that broth spoon back I'll turn you into a flaming sushi roll."  Bailey reluctantly decided to hand back the spoon.

After their filling, exciting, and satisfying sushi brunch, Bailey and Brandy were practically ready to head for Japan.  "Do you think that's what every Japanese brunch is like?" Bailey asked dreamily, "Because I could literally eat sushi like that for every single meal."  The prices were fair enough, on par with most other sushi restaurants in the city at about $15 a roll, and the service was quick, attentive, and friendly.  "I have to admit, I don't mind the idea of having a sushi and ramen brunch every weekend," said Brandy, "But what if I start to miss some good old fashioned eggs and bacon?"  "Well, there is a form of nigiri called tamgo, which is a sort of sushi made from an omelette."  "Problem solved!" declared Brandy, "Let's pack our bags for Tokyo!" 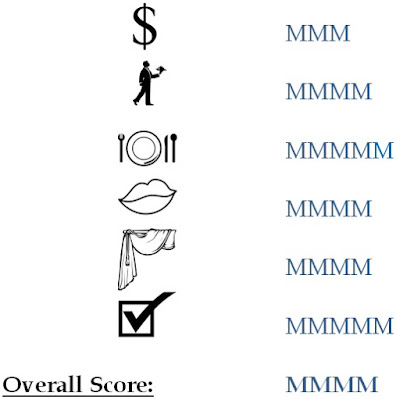