Chop or A Cut Above 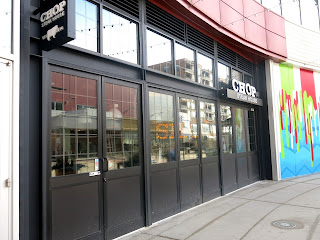 Though Brandy has been doing well with her promise to eat a little healthier in 2016, the influx of vegetables in her diet has left her a little wanting.  "I look down at my lovely plate of salad sometimes and all I can think of is sinking my teeth into a big juicy steak," she has been known to pout as of late.  She consulted several vegetarian friends, asking for advice in the matter, but most of their answers involved the consumption of beans, mushrooms, or tofu, all of which Brandy enjoys, but doesn't consider an alternative to beef. 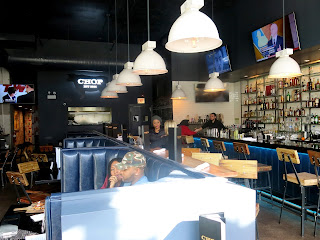 In an anemic daze of meat craving madness, Brandy found herself in the South Loop, wandering around somewhat aimlessly until she found herself in front of Chop, the casual steak house concept from Parisian-born Jovanis Bouargoub.  The meat focused restaurant featured a menu of grass fed, locally sourced beef and seafood dishes in familiar guises, but with some modern twists.  Intrigued, and carnivorous, Brandy threw caution to the wind and settled in for a meaty brunch.  "I'll order a salad too," she conceded, "Then no one can say I didn't try to keep things healthy."

Chop had a hip, modern feel to it with a black, industrial interior and stylishly rustic bar, fronted by a large light up sign.  The restaurant seemed a little dark for brunch, but the large booths were comfortable and the atmosphere buzzing, but relaxed. 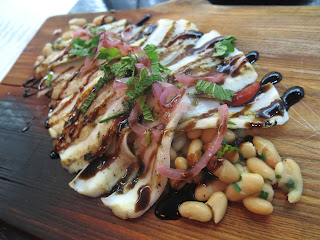 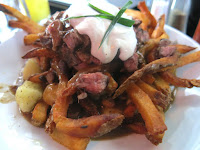 To start off the meal, Brandy ordered one somewhat healthy plate and one not so healthy.  The Charred Calamari Steak, which came served over a bed of white beans, pickled onions, and mint, was quite the surprise.  The calamari was wonderfully tender and light, while the beans provided a nice bit of texture.  Brandy especially liked the kick of flavor from the drizzle of balsamic vinegar mixed with the freshness of the mint.  For her other starter, Brandy nibbled on the Steak Poutine.  The fries in the poutine were just crunchy enough to satisfy, and the cheese curds were perfectly melted by the heat of the gravy alone.  The gravy itself seemed to have been a little excessively applied, but the flavor was still nice and meaty.  The steak was tender and juicy, and a dollop of sour cream on the top of the plate was a nice touch with a bit of tangy creaminess. 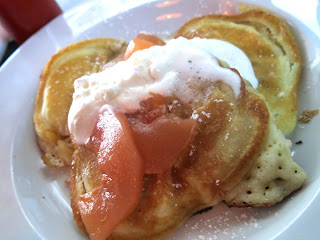 Transitioning to a sweet dish, Brandy ordered a plate of Johnny Cakes, a cornmeal based pancake served with pickled cantaloupe and brandy infused whipped cream ("I think I should get a cut of the sales for anything with brandy whipped cream on it!" Brandy giggled to herself).  The cakes had a nice fluffy texture, matched by a crisp underside that maybe bordered on being burnt, but Brandy liked them all the same.  The real pleasure in the dish was the pickled cantaloupe, which lent an unusual sweet and sour flavor that more resembled a peach or an apricot.  "It is hard for me to say I would eat an entire plate of pancakes myself," said Brandy, "But this may be one of the exceptions to the rule." 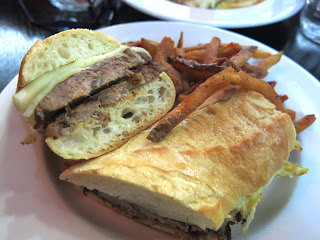 Moving on to the main attraction, Brandy ordered the Country Breakfast Sandwich, which was a classic combination of eggs, cheese, and steak.  The steak used in the sandwich was on the tough side, as was the bread, making the thing a little difficult to eat, but the flavor was nice.  Ironically, Brandy's eternal complaint about meaty breakfast sandwiches applied here, as a little bit of vegetation or sauce could have helped to soften and freshen things up.  "But I guess I can't complain, considering I came in here looking to satisfy my carnivorous urges!" Brandy reasoned.  After only eating a fourth of the sandwich, Brandy's need for red meat actually seemed satisfied, so she ordered up a Caesar salad so that she didn't completely break her rule about consuming some greenery.

While the quality of the food seemed good considering the price points, the service, while friendly, was a little lacking, with not enough information offered about the menu (Brandy wasn't told about the brunch cocktails available until later in the meal) and an oddly long wait for entrees due to an apparent computer error.  Never the less, the entire meal did help to put Brandy's lust for flesh to bed for the moment.  "I think it's a good thing I gave into my baser urges after all," Brandy posited, "A bit of indulgence has it's place, and now that I've succumb, I can move forward.  Now, what should I have for dinner?  I could really go for a burger." 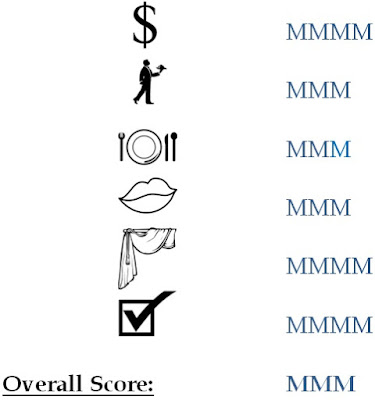