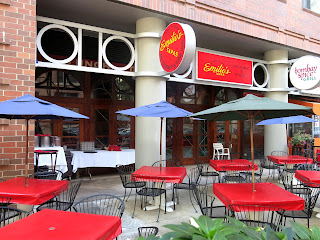 Brandy is always disturbed by the idea that there are people in this world who simply don't like brunch.  "How can one not love brunch?  It's like the greatest hits album of meals!" is often Brandy's declaration.  At this point, she has heard every counter argument in the book.  Brunch is over rated.  The service is bad.  The lines are too long.  It's nothing but hungover, inconsiderate people.  Well, maybe that's true in New York, but it certainly isn't in Chicago where, as Brandy has proved over the last 5 years, the brunch scene is a dynamic, budget friendly, foodie paradise where chefs are often allowed to experiment with recipes and formats a little more freely than they can at dinner service.  And, as Brandy recently discovered, brunch can even make a major difference in people's lives. 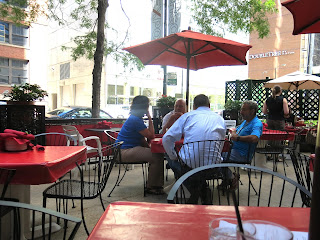 Brunch for a Cause started in San Diego as a group of young professionals who wanted to shine a light on some underfunded charities in their area.  The idea took off with events being held all over the country at various restaurants, all of whom worked closely with their Brunch Ambassadors to provide special deals and dishes to enjoy while benefiting scores of worthy causes.  It was only a matter of time before such a brilliant idea made its way to Chicago, and recently, Brandy was pleased to attend the inaugural event at Emilio's Tapas in Streeterville, which benefited Camp Kudzu. 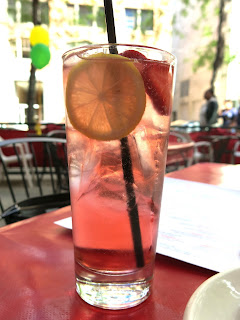 As the day of the event was a beautifully mild summer day, Brandy did the rare thing of choosing a seat on the patio, which overlooked a quiet side street.  The special the restaurant had worked out for those dining with Brunch for a Cause was a shockingly inexpensive choice of four courses for $25, plus $20 more for unlimited select cocktails and wines.  Never one to turn down an option to make her brunch bottomless, Brandy went for the whole hog, so to speak ("It's for charity, after all," she justified to no one in particular), and decided on the Gipsy Rose (sic), a concoction of Spanish Cava, strawberry, and lemon that made for a bright, sweet, and effervescent treat all throughout the meal. 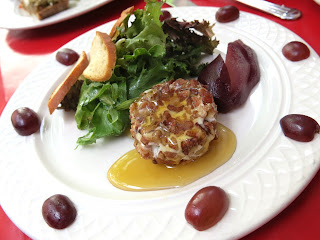 For the first course, Brandy chose the Queso de Carba con Nueces, some pecan coated goat cheese with honey, red wine poached pear, toast, greens, and grapes.  Such a straight forward dish could have easily had its presentation ignored, but Brandy appreciated the little bit of extra effort that had been put into plating it.  The rich, creamy goat cheese was a perfect match for the sweet pear, with the nuts providing a nice crunch.  Brandy could have done with a few more pieces of toast, but in the end she just mixed what was left of the cheese with the greens to make a nice little salad. 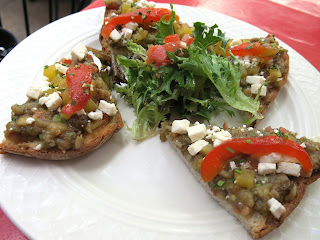 The next course was the Tostada a la Andaluz (which Brandy thought resembled more of a bruschetta) that was topped with some eggplant, beets, and more goat cheese.  The over all taste was actually a nice counterpoint to the previous dish, as this one had a slightly tangy, pickled flavor as well as an herbal finish.  The overall plate was very hearty, even for a dish meant to be shared, and could have easily made for a nice little lunch all on its own. "I'm not usually the biggest fan of eggplant," Brandy said, "But I do have to say that this is possibly the most colorful way I've seen a normally drab vegetable dressed up in quite some time." 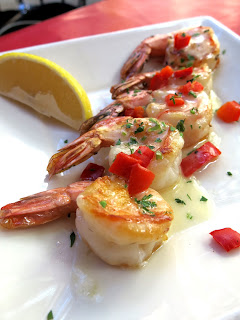 For her protein, Brandy chose the Gambas a la Plancha, a row of grilled shrimp with lemon and garlic butter.  The shrimp were very tender and fresh with a wood-fired taste from the grill.  The garlic butter was wonderfully balanced, serving to enhance the shrimp, rather than overwhelm them.  They were so delicious that Brandy considered ordering a second plate of them, but by that point, even her tremendous appetite was beginning to wane under the weight of the previous dishes. 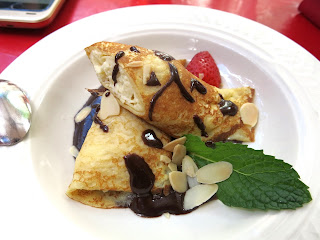 After a bit of a wait (the first three dishes had come out fairly quickly, though as they were tapas and meant to be shared, that perhaps wasn't so strange) the forth course finally arrived, a dessert not on the regular menu consisting of vanilla custard filled crepes with chocolate fudge sauce and sliced almonds.  The crepes had a lovely texture that was light and fluffy, but still thin and delicate, while the custard was thick and rich.  The chocolate sauce, while delicious, dominated the dish a little with its decadence, but the almonds were a nice little touch.

For the price, Brandy thought the amount and quality of food at Emilio's had been a brilliant value, and the fact that it had all been for the benefit of a worthy charity made it that much better.  Though the service had been a little patchy with the drink refills and there had been a long wait for the dessert and then the check, the attitude of the servers was relaxed and friendly.  "It was the thought of benefiting someone while I brunched that brought me here, but its truly the food that would bring me back," as Brandy put it.

Brunch for a Cause will be planning monthly events at restaurants all across Chicago, so make sure to like their Facebook Page to find out when and where the next one will be! 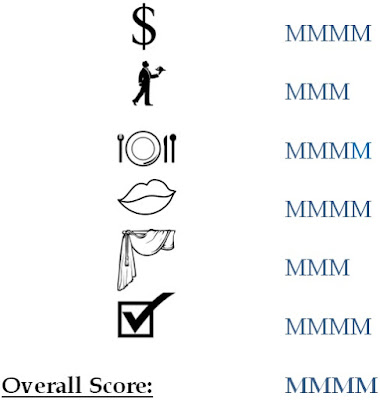