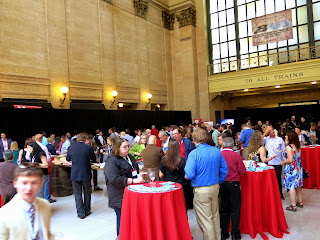 As the well traveled bon vivant that she is, Brandy loves a good excuse to learn about different and exciting regions of the world, and recently she had the privilege of attending the Rioja Wine and Tapas Festival, which was held for the first time in Chicago this past weekend in the Grand Hall of Union Station.  The festival showcased the extraordinary wines produced in the Rioja province of Spain as well as local and national chefs creating original tapas to compliment them.

The setting of the festival could not have been more beautiful.  Under the sunny skylight of the architectural wonder that is Union Station's Grand Hall, the festival did an excellent job of adding little touches to the atmosphere, such as the candle lit entrance down the stair way, greeting guests with a keepsake wine glass, and having Spanish guitar music played live by a group of lovely and talented young men. 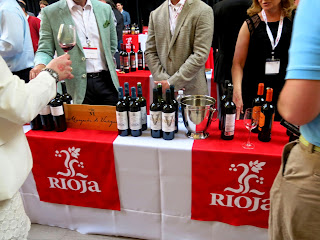 Brandy began the day sampling wine from the over 50 wineries present, all of which showcased several bottles of Rioja's carefully classified varieties.  The wines from this region are so distinctive because of the moderate climate, mineral rich soil, and the signature tempranillo grapes, which mean an abundance of reds (though a few whites and rosés poked their heads out every now and then) with bold, smooth flavors that generally match well with rich foods like red meat and seafood.  The wines fell into four catagories: Crianza, the most versatile (these are the wines the locals drink on a daily basis), Reserva, acidic and dry with notes of red berries, Gran Reserva, an even deeper flavor with more woody notes, and Cosecha, which is sort of a catch all for vintages that don't fit into the other groups.  Brandy tended to favor the Reserva blends, as they were flavorful and complex without being overly dry. 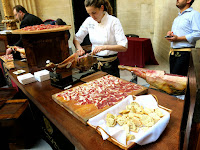 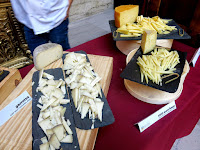 Now thoroughly educated on the Rioja wines, Brandy headed over to the food stations.  Several quadrants of the hall boasted different experiences, with the corners near the entrance being dedicated to the Cheese Cave, Olive Bar, and Jambon carving station, the sides hosting the dessert stations, the edges holding the chef prepared tapas, and the center island making space for the whole animal carving.  Brandy noted that not only were there several notable Chicago chefs, but also quite a few national representatives from places like Las Vegas, New York, and Orlando. 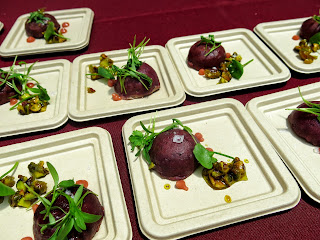 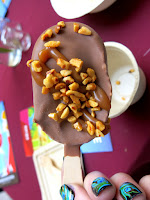 The tapas seemed to be largely centered around different varieties of Spanish sausage, like chorizo, androlla, and morcon.  The heavily spiced meats of course paired excellently with the bold red wines of the region, as did the rich cheeses, the pickled veggies at the olive bar, and the freshly carved cured and roasted meats.  Some of Brandy's favorite dishes of the day were the seared sausage with white beans and red pepper sauce from Chef Nathan Sears at The Radler, a sausage with ramp pesto from Chef Rob Levitt at Butcher and Larder, another red sausage dish with greens, fresh cheese, and a bright citrus sauce from Chef Cory Morris at Rural Society, and  a curried mussel stew from Chef Carlos Gaytan at Mexique (who was easily the crowd favorite with the longest line).  There were also a few sweets to be had, like the delectable chocolate covered banana sorbet with caramel and roasted peanuts, as well as a smooth basil gelato with candied beets from Zarlengo's Italian Ice. 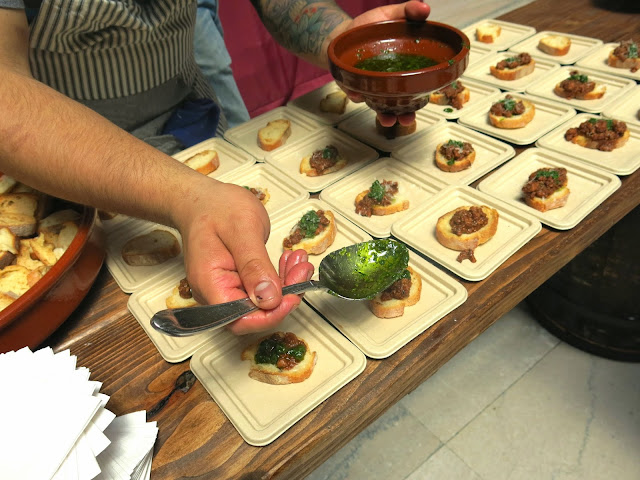 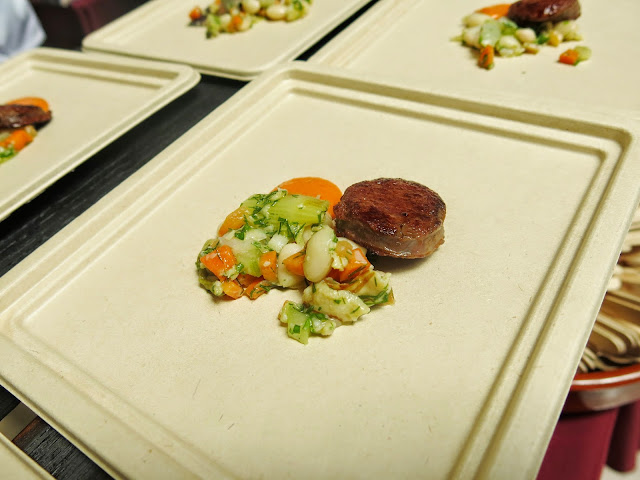 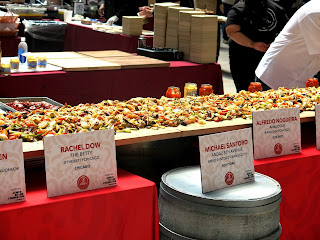 The day focused around different preparations at the center island, which included a huge collaborative starchy vegetable dish, which was laid out on a length of table, then scooped up and served with flat bread.  The main event, however, was the chefs carving up whole roasted animals, serving everything from the loin to the shoulder to the cheeks, which was definitely not a sight for the faint of heart (or squeamish vegetarians for that matter). 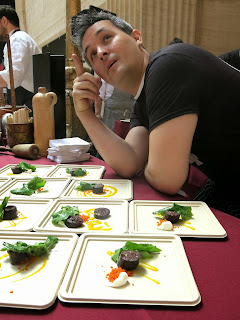 Ultimately, it wasn't even the wine that did Brandy in, but the incredibly rich food that had her sneaking off to have a sit down to catch her breath.  "The Rioja people sure know how to live!" she gasped, "Bold wines, flavorful food, great music... this is my kind of place."  Indeed, the "viva" atmosphere seemed to even be permeating the chefs, who were generally in very playful moods while chatting with festival goers, posing for pictures, and serving up their creations.  Seeing such revelry and excitement, Brandy sincerely hoped that Rioja would be making a return trip to Chicago next year.  "Mostly because I'm sure I missed one or two of the wines," she commented, "And my motto, as always, is leave no wine untasted."

The writers of this blog wer einvited to attend the Rioja Wine and Tapas Festival free of charge as members of the media.
Posted by Bunny and Brandy at 10:43 AM