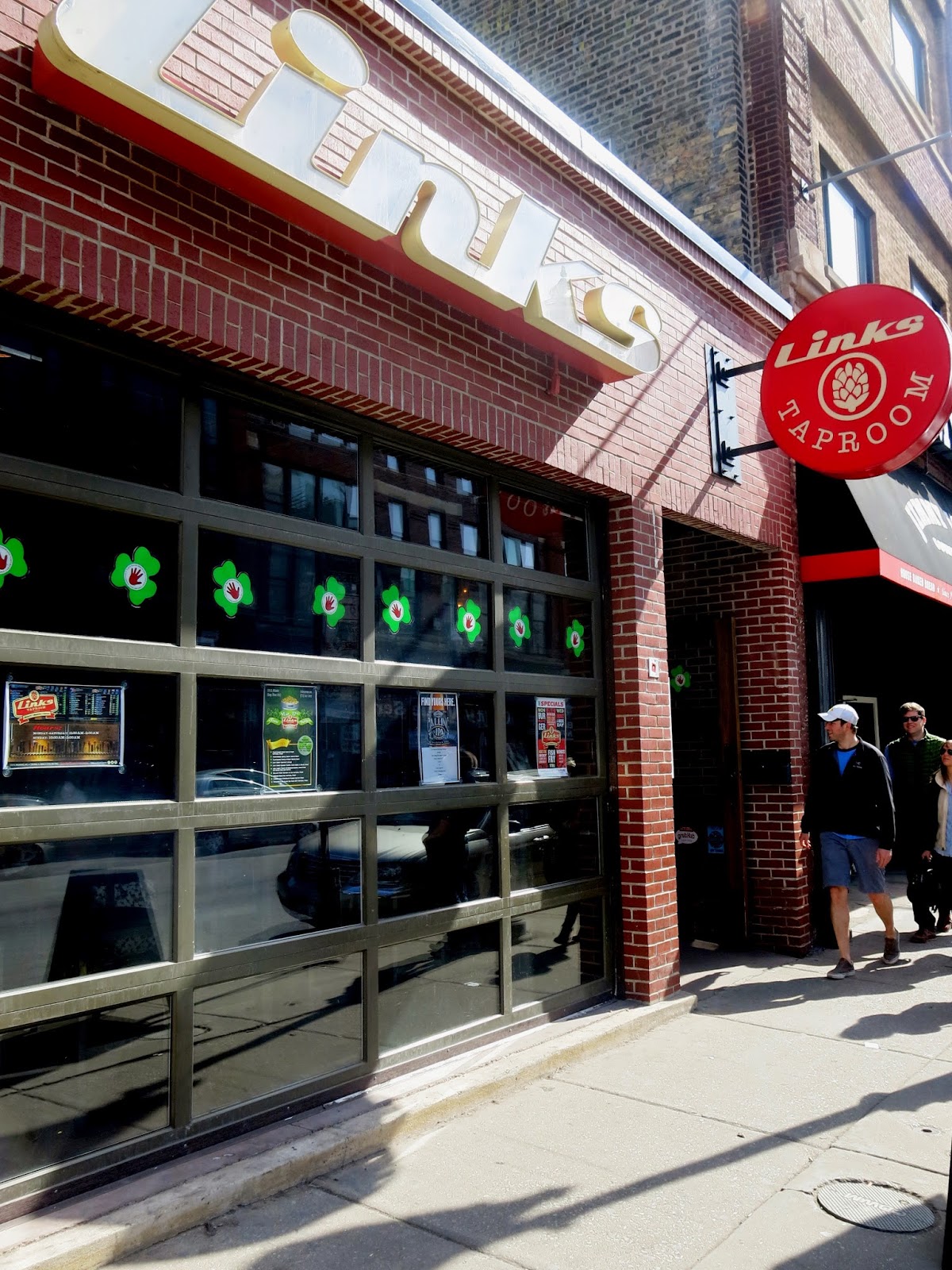 "It's been such a long time since Hawk came out to brunch with us," Brandy commented one day to her friend Bailey Blue, "What a busy man he must be!"  "Actually...Hawk's not such a big fan of brunch..." Bailey said carefully.  "Not a big fan of brunch?!?!" Brandy sputtered after nearly fainting into the street in front of an on coming bus, "Who is this man?!?!"  "He's just not big on delicate foods.  He's on this whole manly kick where he just wants to eat beer and sausage all the time.  Don't take offence to it."  "Brunch isn't all delicate foods!" Brandy shouted, "That's what's so great about it!  It can be anything you want it to be!  Listen to me, you're going to call that man of yours immediatly and I'm taking him for a manly brunch he'll never forget!"

Brandy chose to take Hawk to Links Taproom in Wicker Park, a beer focused bar with a brunch menu themed on sausage.  "Fine, I'll go," Hawk relented, "But I won't be ordering anything that comes with a foam, coulee, or micro greens."  "I don't think you'll have to worry about that," Brandy smirked. 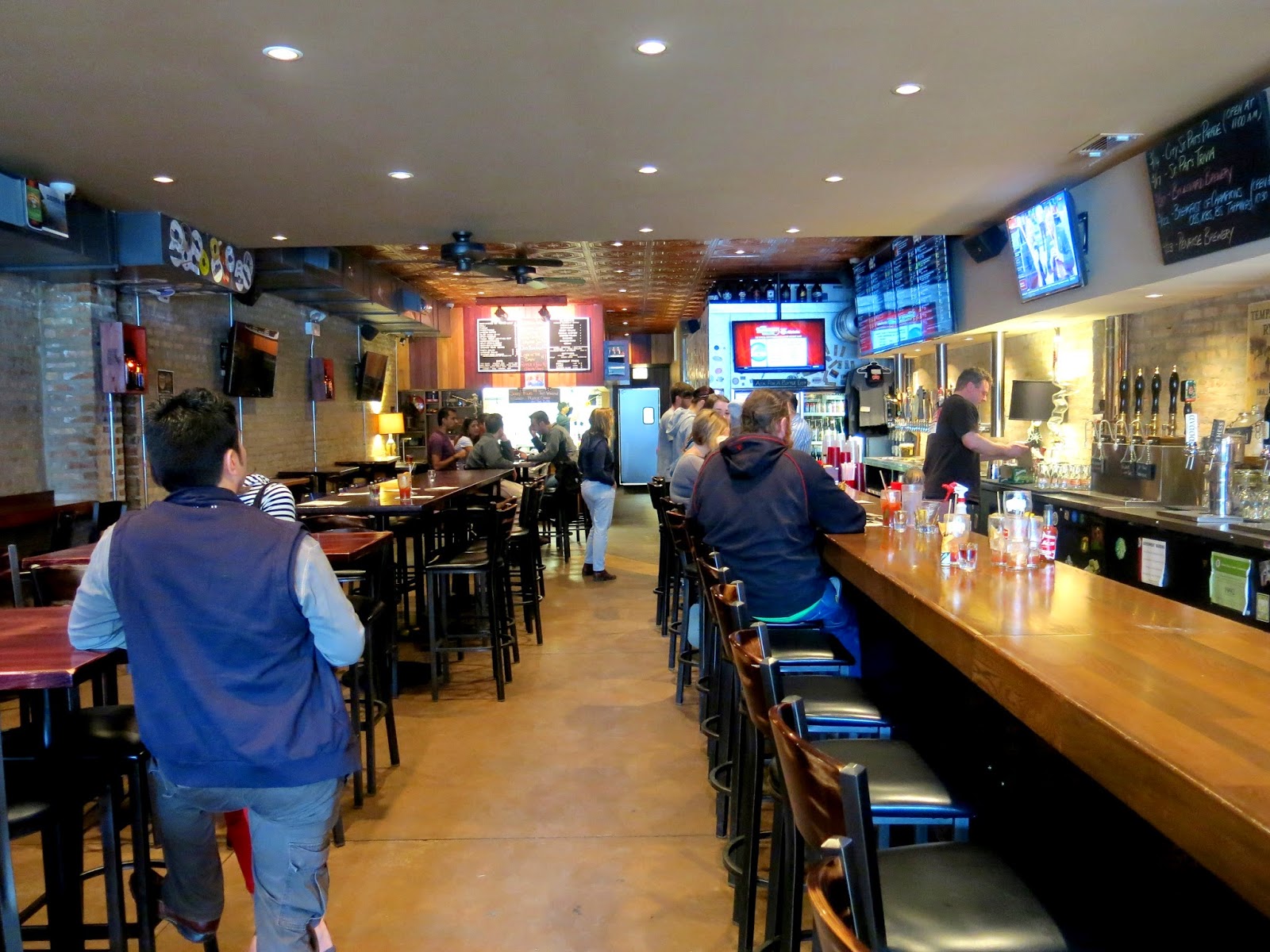 It took a minute for Brandy to take in the interior situation at Links Taproom.  There was typical neighborhood bar decor, like an exposed brick wall, high wood tables, and a long bar, but instead of televisions showing various ball games, there were several screens with what looked like bowling scores on them mounted all around the place.  A closer look made Brandy realize that these screens actually showcased the wide variety of craft and micro brew beers the bar had in stock, even going so far as to show which were running low.  "How genius!" Brandy exclaimed in delight. 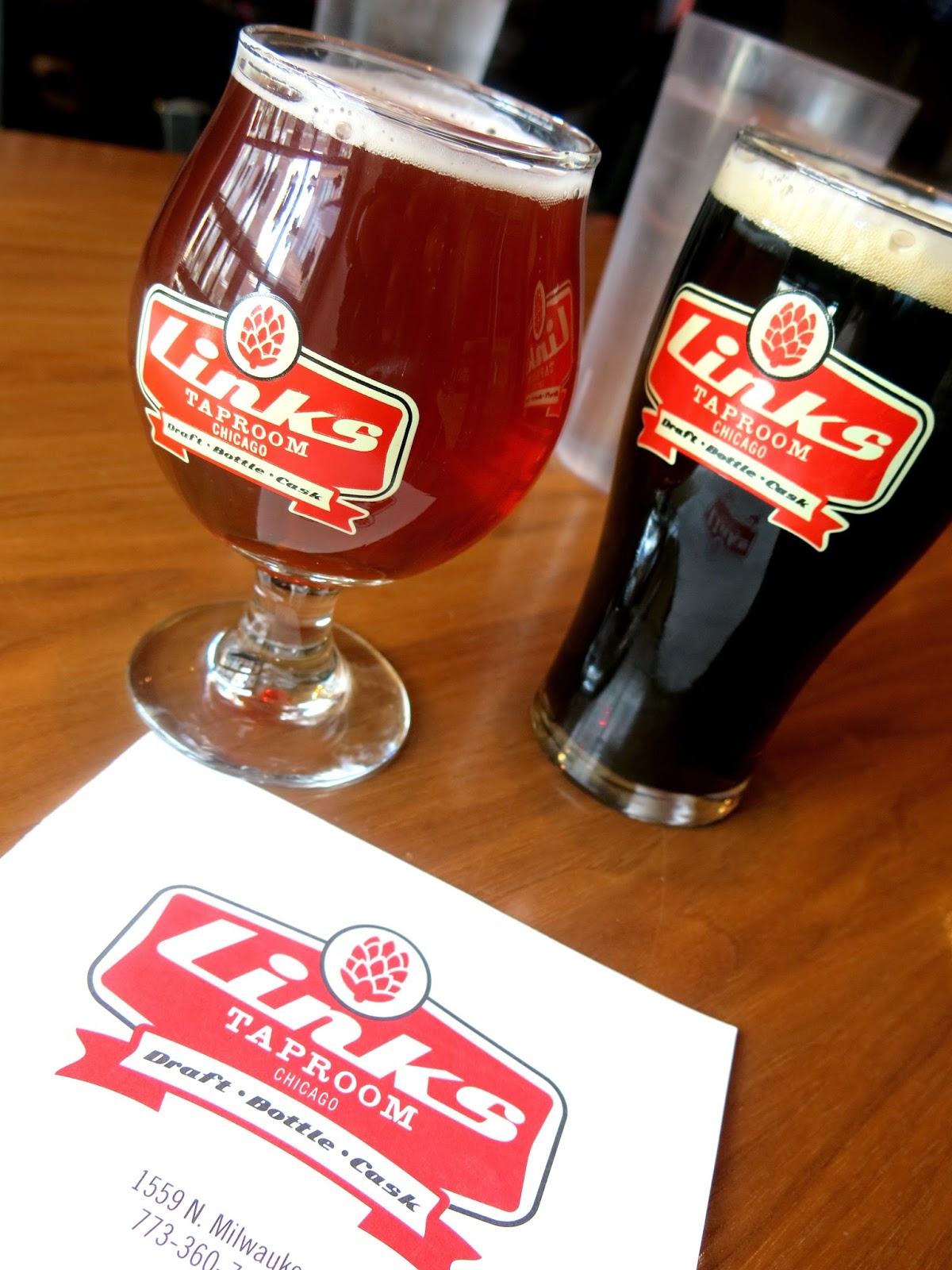 Using the screens as menus, Brandy and Hawk ordered up two beers: Goose Island Matilda for Hawk and Two Brother's Panther Fist for Brandy.  "See?  Beer is manly, isn't it?" Brandy said to Hawk as their drinks arrived.  "I suppose," Hawk conceded, sipping, "Although my beer does have a girl's name."  "Oh, for goodness-!" Brandy exclaimed, and going back to the beer menu, she ordered him what she thought was the most manly sounding thing list: a maple flavored porter called the Smoked Pigasus.  Hawk sipped approvingly.  "It's good," he said, smacking his gums, "Tastes a bit like chocolate though."  Brandy threw her hands in the air. 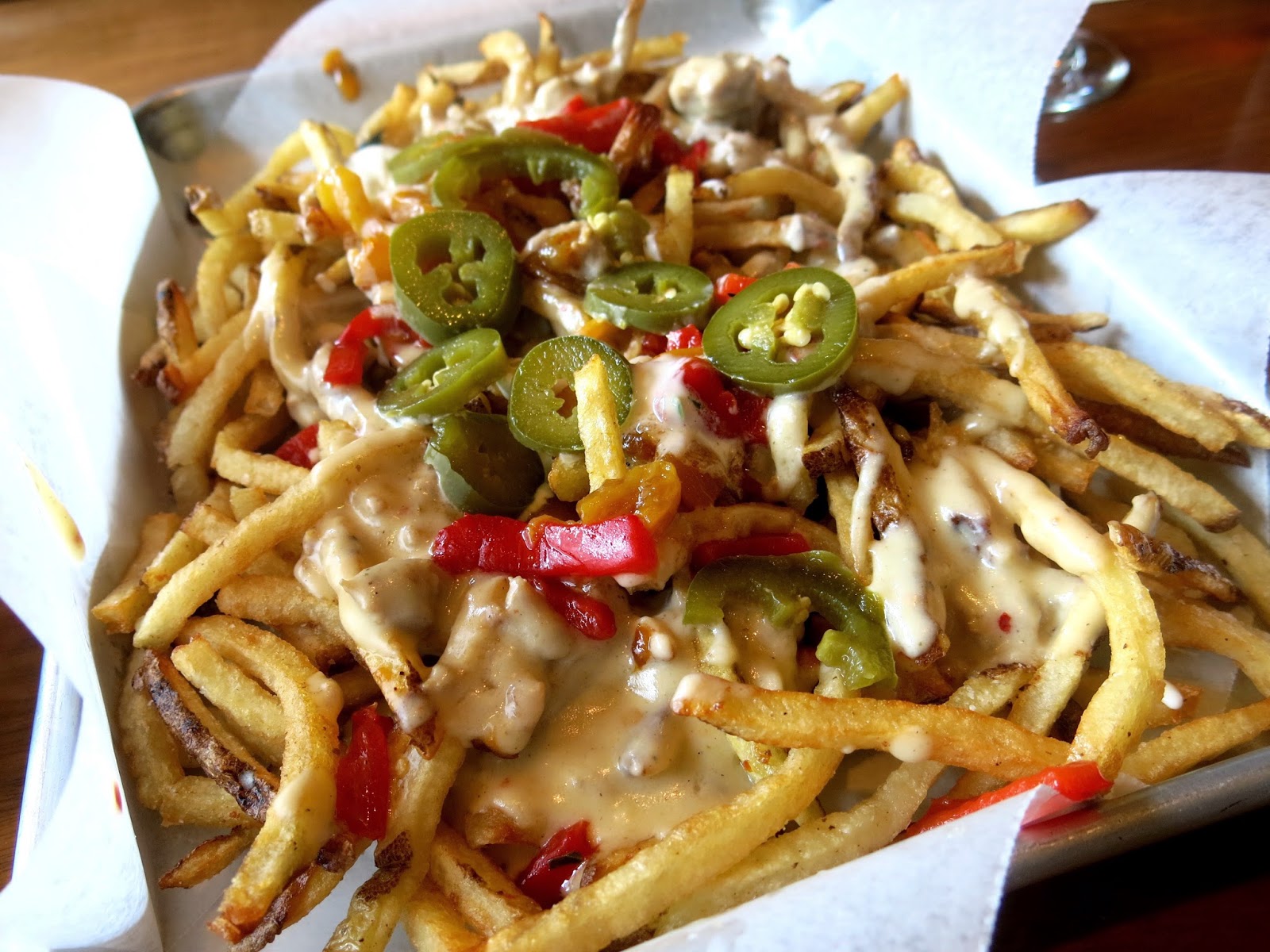 Foregoing the beer and ordering up some food, the pair started off with a dish called the Brunch You in the Fry, an entire tray full of hand cut fries and slathered in goat cheese, sausage gravy, roasted red peppers, and pickled jalapeno slices.  Going in with nothing more than a fork in each fist, Brandy and Hawk made quick work of the sloppy mess of deliciousness.  The fries were thin and crispy, keeping their texture even under the weight of all the toppings, and the gravy was thick with a good smokiness from the sausage.  Even the peppers played their part, adding some sweetness and tanginess to cut through the richness.  "Plus, I do like a bit of color on things," Brandy said.  "Color isn't manly.  We like all our food to be in shades of brown and beige," Hawk countered. 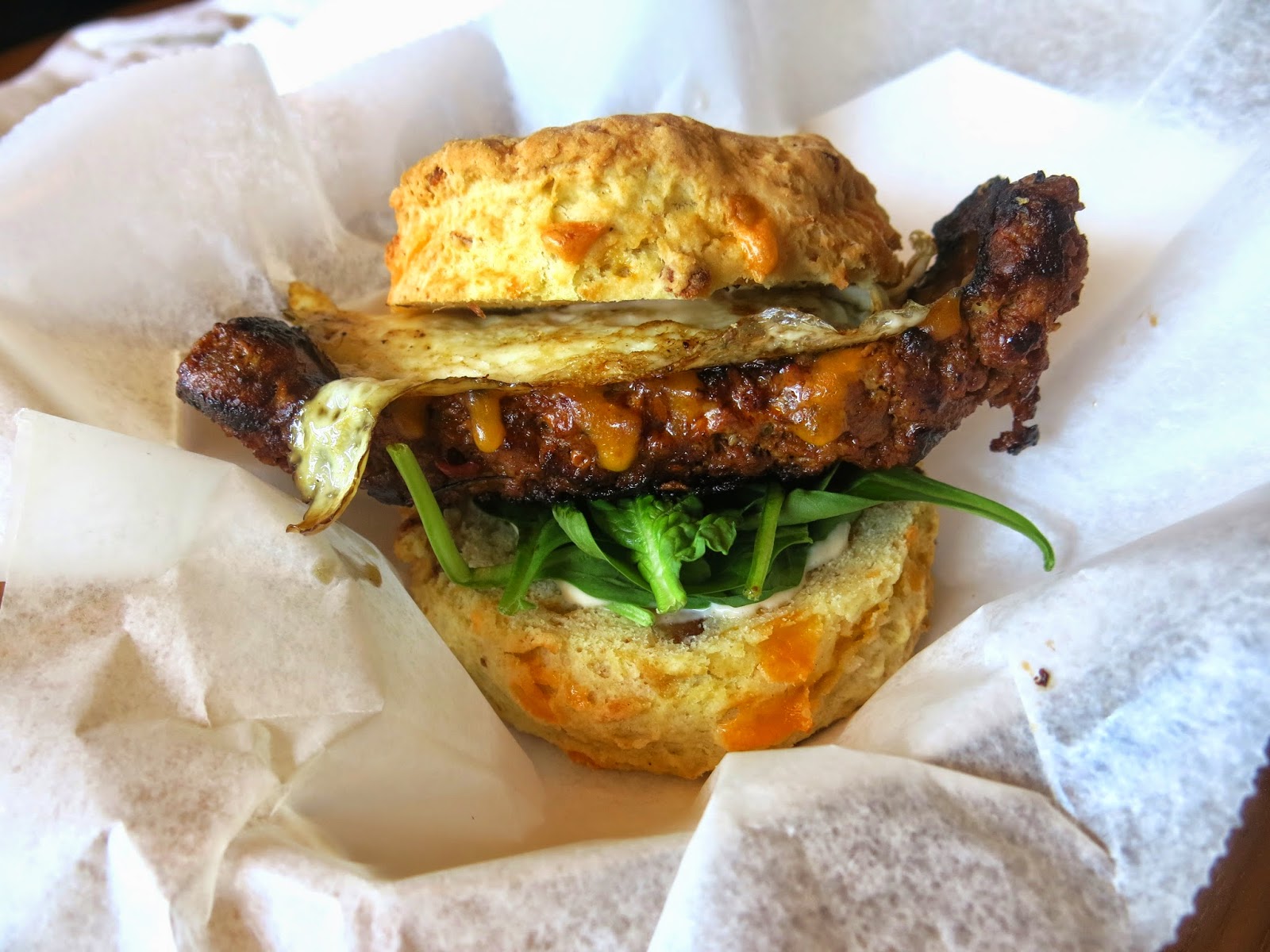 For her entree, Brandy ordered a dish hilariously entitled the Chorizo Horny, which was a breakfast sandwich made from a massive cheddar bacon biscuit, a slab of chorizo, a fried egg, some bacon mayo, and a little spinach "for color."  Brandy actually approved of the little touch of vegetation, as so many restaurants often leave plant based foods out of their breakfast sandwiches all together. At the heart of the sandwich was the chorizo, which slightly resembled a slab of ribs, and had just the right amount of spice and chew.  The biscuit was perhaps a little dry, but very flavorful, and so tender that it fell apart into chunks a few bites in, forcing Brandy to resort to a fork and knife.  "Put those down and eat with your hands!" Hawk demanded.  "Now now!  Where I come from, being manly involves manners and etiquette," said Brandy, popping her pinkie fingers. 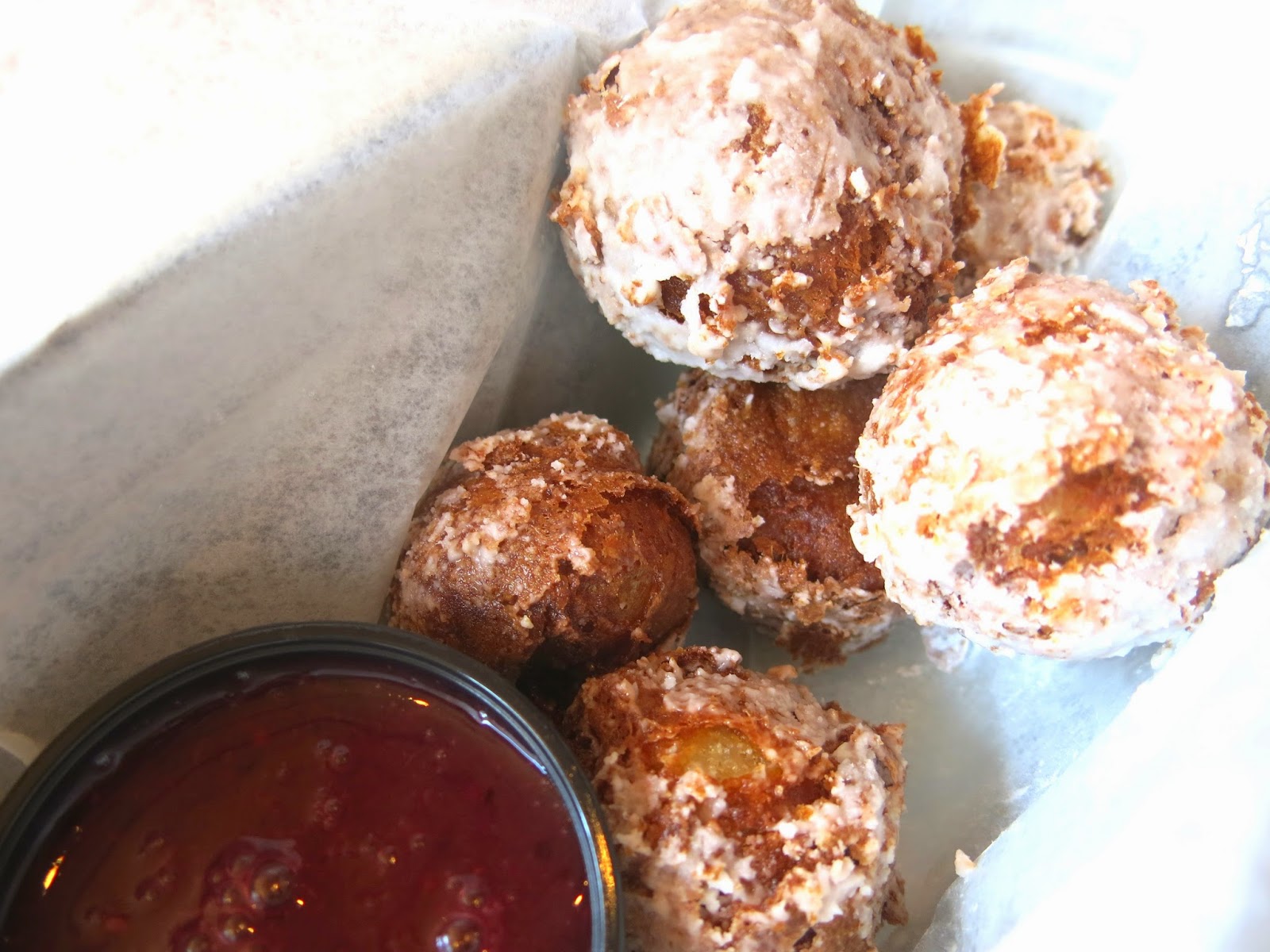 Brandy talked Hawk into ordering the most interesting item on the menu as his entree.  "Come on, if you're a real man, you won't have any issue saying the name of that dish," Brandy chided him.  Hawk rolled his eyes.  "Fine," he grunted, "I'll have the Fat Man in a Bathtub, please."  The aforementioned Fat Man in a Bathtub turned out to be hefty balls of bratwurst meat coated in waffle batter, deep fried, and served with a berry compote and some real maple syrup, housed in a tiny beer mug.  Hawk was at first skeptical of this sweet and savory combination, but one dip of the balls into the berry sauce erased all his doubts.  The meat was juicy and succulent inside and the waffle batter was light, crisp, and buttery with a delectable sugar glaze that left one licking their fingers in delight throughout the eating of it.

Because of the remnants of the drinking holiday weekend, the bar was a little busy, and without servers, a single bartender, manager, and a few food runners did the brunt of the work.  Though a little slow, they were extremely friendly and accommodating, especially the dynamic bartender who quickly learned the names of everyone in the room and made it his mission to recommend beers for every taste.  The prices were extremely reasonable, with all of the brunch specials coming in under $10, which was quite the deal considering the portion sizes and quality of the ingredients.  "It may not have been pretty food, but it certainly was tasty," Brandy commented.  "It certainly wasn't delicate, that's for sure," Hawk laughed, "I guess brunch really can be anything you want it to be."  "Indeed," Brandy grinned, "Now finish up the rest of that beer with your pinkie in the air like a proper man!" 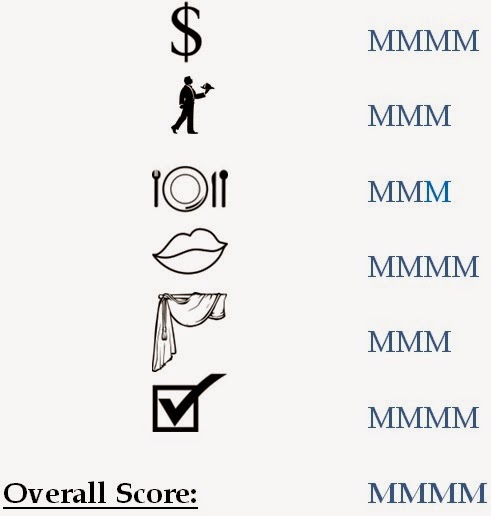