Boiler Room or The Whiskey in the Float 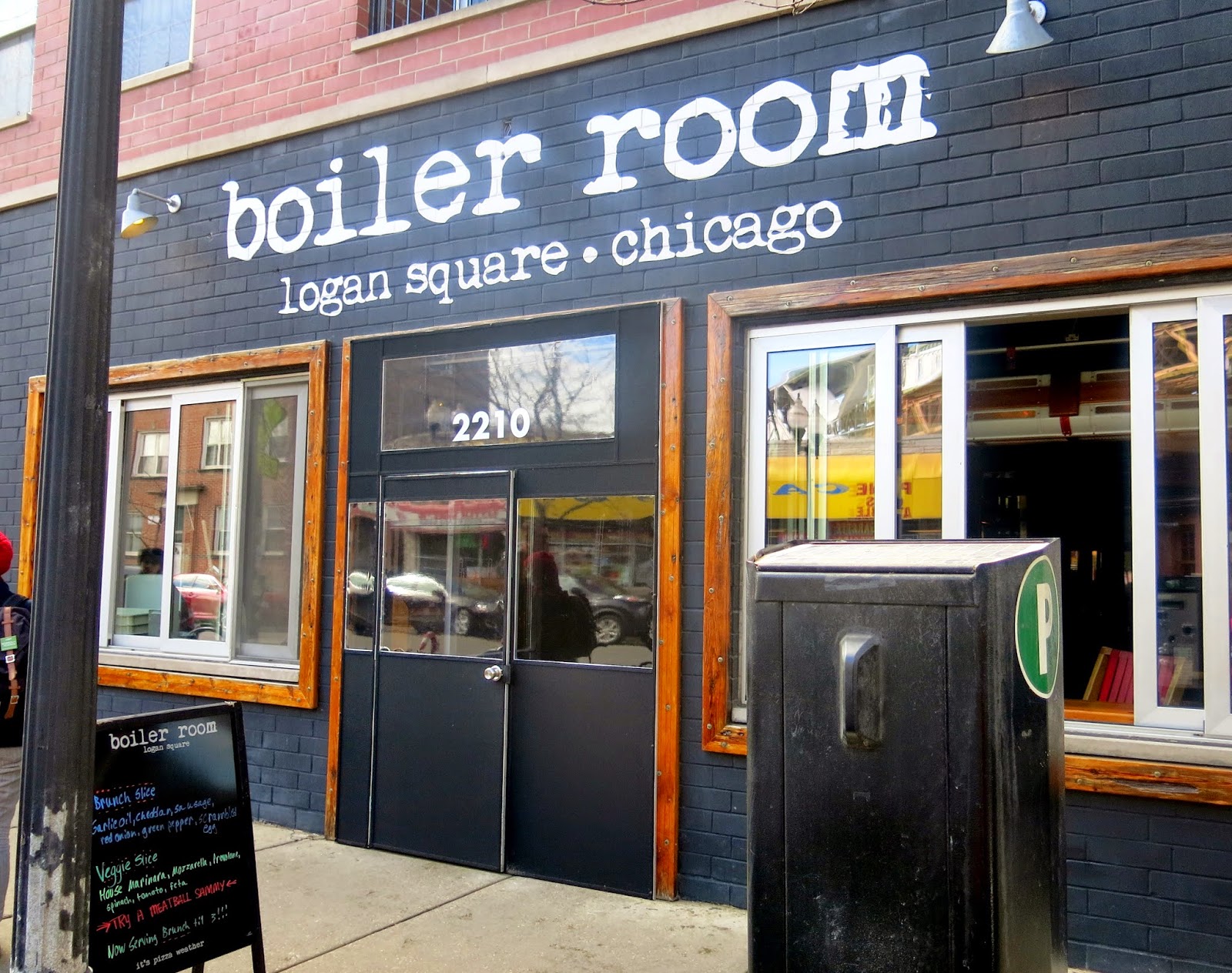 "The weather has just been so lovely this week!" Brandy told her good friend Brocco Leigh Binto, "It's like someone flipped a switch and suddenly spring arrived."  "Funny you should say that," Brocco replied mysteriously, "My lab assistant, Brassica, and I have been working on a weather machine as of late.  I can't say too much about it, but suffice it to say that our initial tests seem to have generated positive results."  "My dear man, if you are telling me that you and that darling girl are responsible for the snow melting, the sun shining, and the warm breeze blowing into town, then you deserve an award."  "Well, I can't guarantee there won't be a freak snow storm in May, but we've certainly made great strides.  But no awards are necessary...yet."  "Well, then at the very least, someone owes you a drink.  You and Brassica are coming to brunch with me immediately." 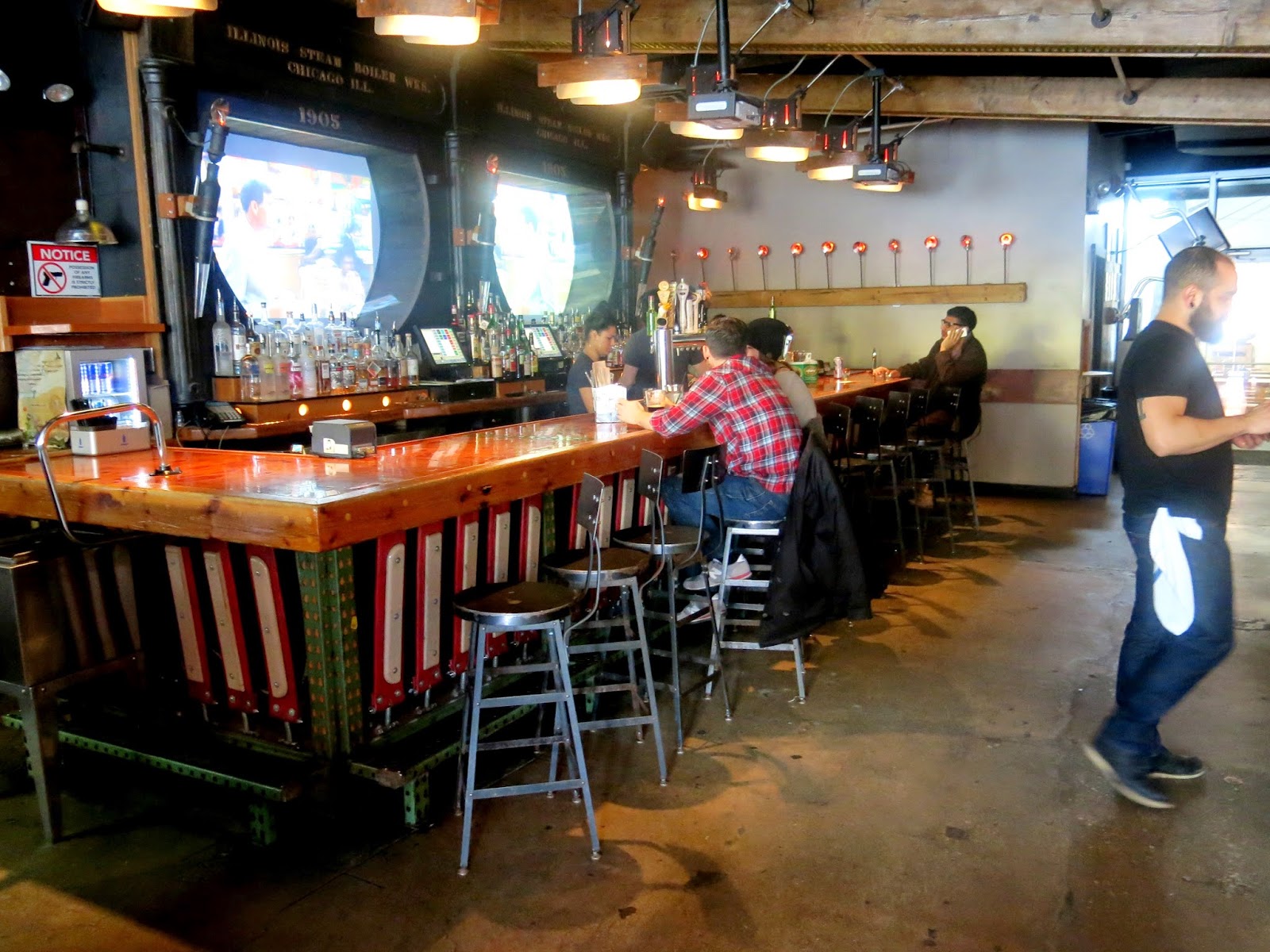 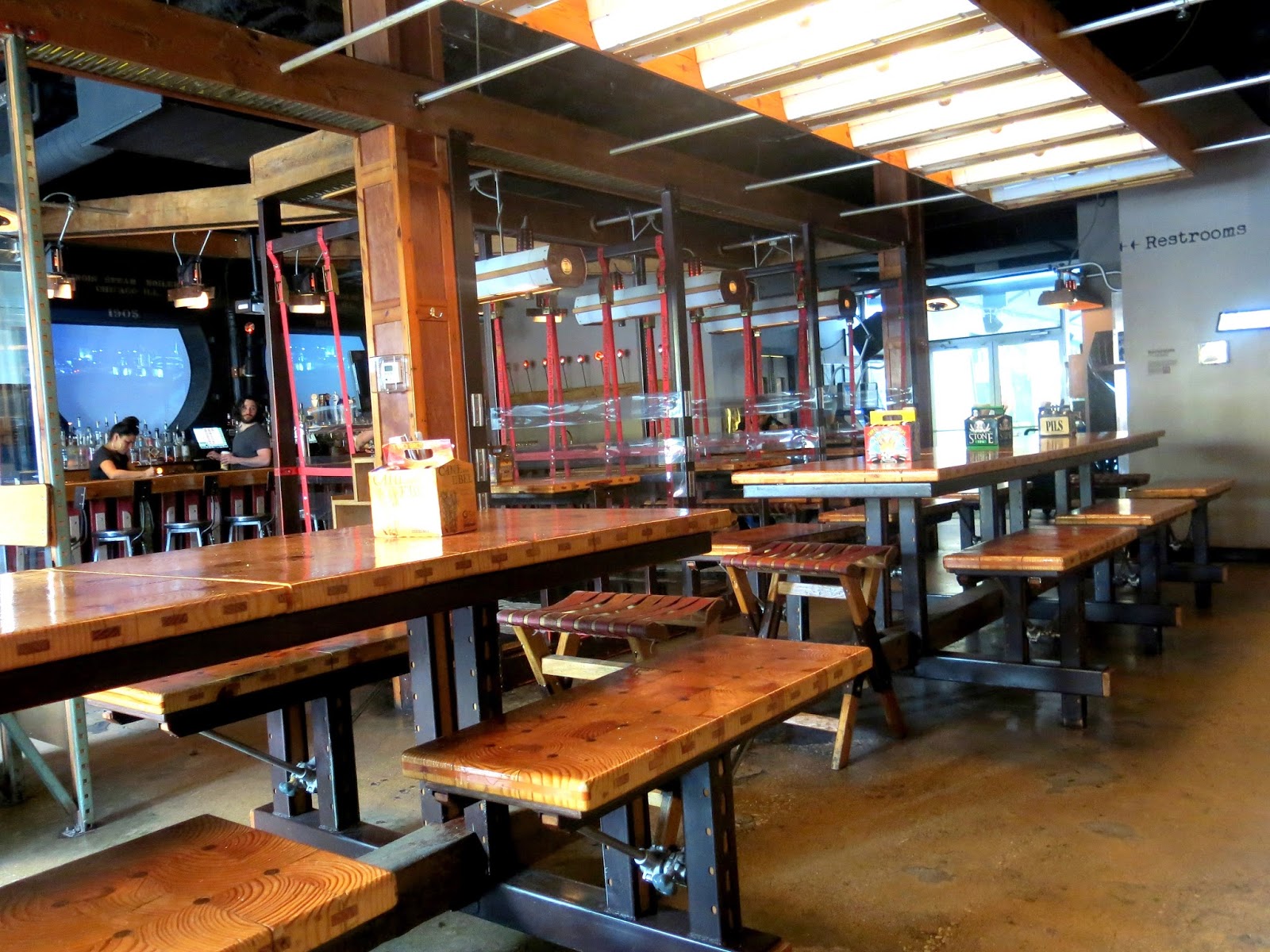 Brandy chose to take the scientist duo to Boiler Room in Logan Square, who recently launched a pretty innovative brunch service.  Boiler Room had a cool rock 'n roll kind of feel with lots of dark corners to hide out in.  The space was big and open with an impressive bar at the back of the room that had two television screens made to look like giant barrels embedded into the wall. 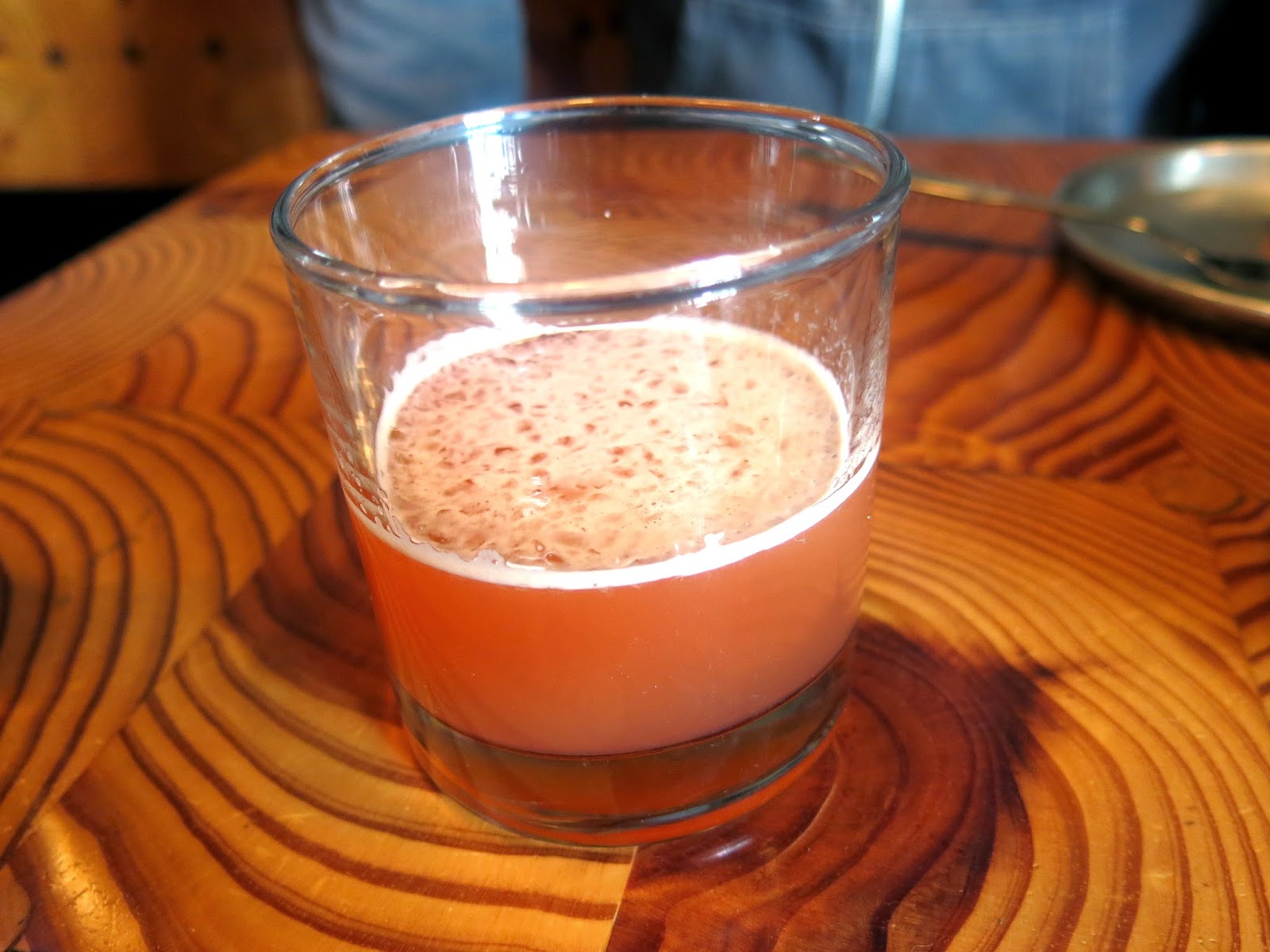 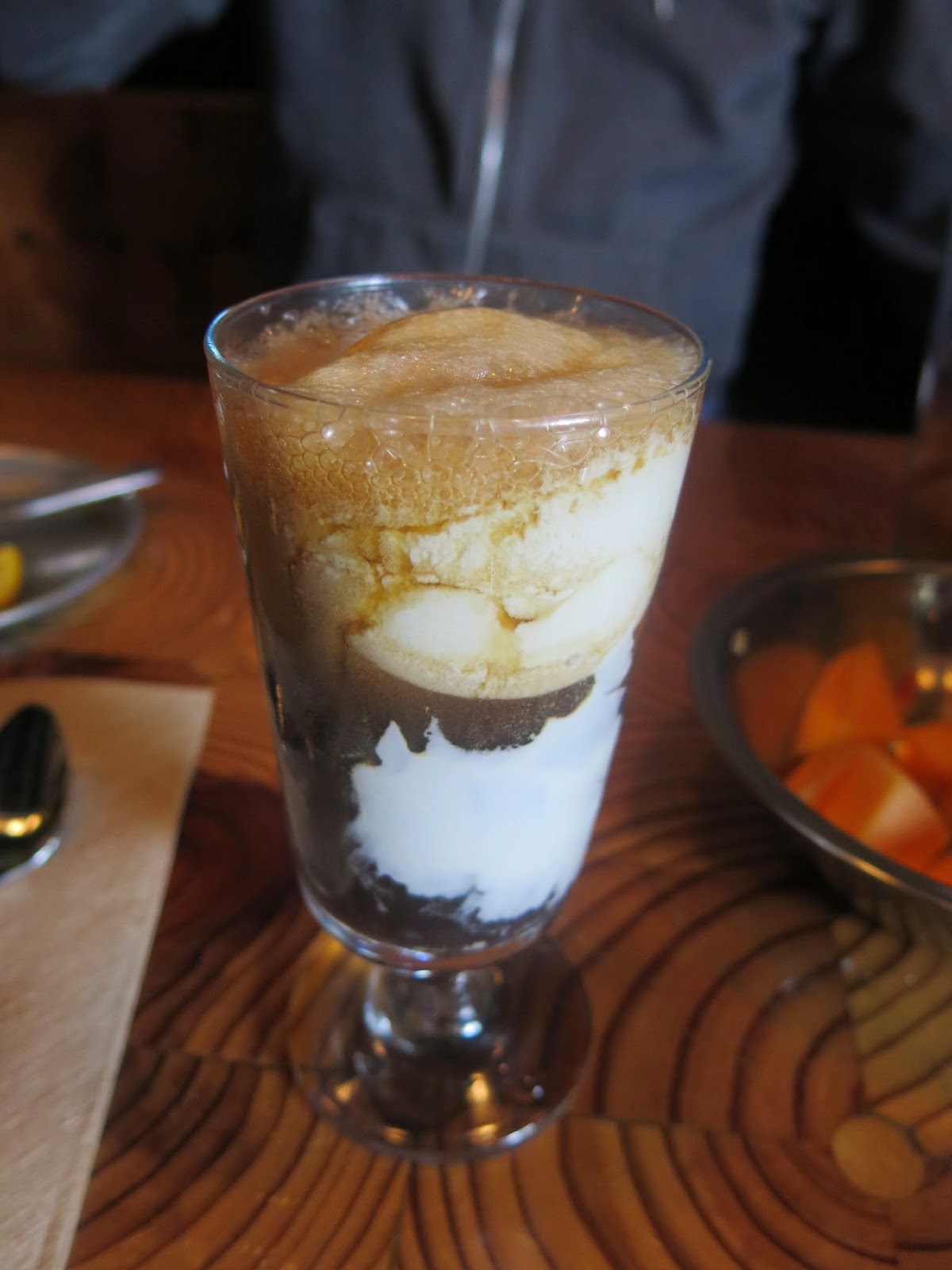 While trying to decide on drinks, the three diners munched away on a well put together fruit bowl.  The drinks menu was indeed a daunting landscape with lots of craft beers and sassy sounding cocktails to choose from.  Even though the "PBS" was tempting (a bloody mary, beer back, and a slice for $8.50, a variation on the popular PB&J special that runs all week), eventually, Brocco settled on the Broken Knuckles, a mix of whiskey, Aperol, honey, and lemon.  "I like it!" he cheered, "It's strong but sophisticated, like a gangster who goes to the opera on the weekends."  Brandy gravitated towards one of the sweeter specialties called The Birthday Party, which was essentially a Jameson infused soft serve ice cream floated in a milk stout.  One sip and Brandy was in love.  "Oh, I could easily wake up to one of these every morning!" she exclaimed, "And go to bed with one every night too!" 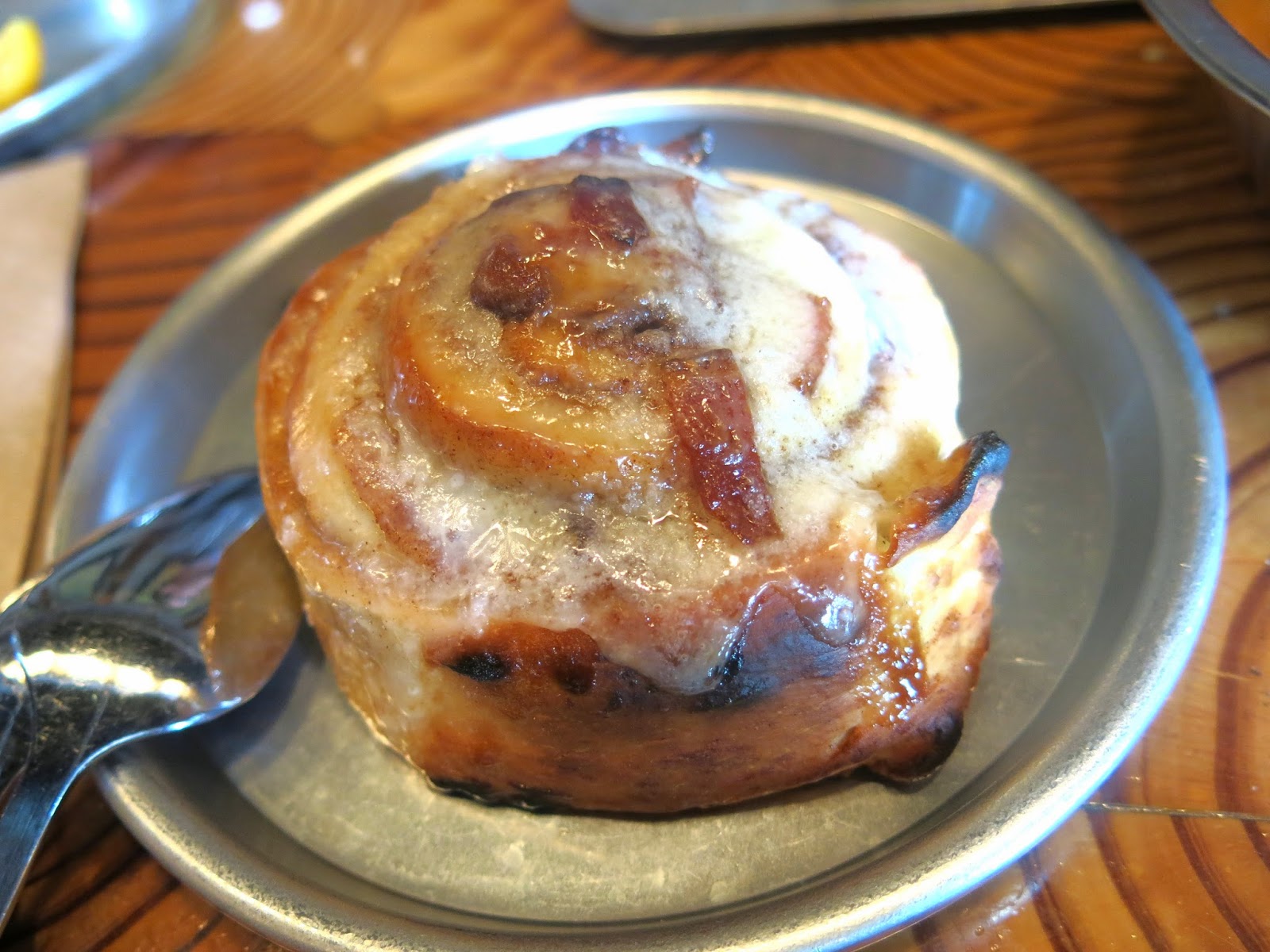 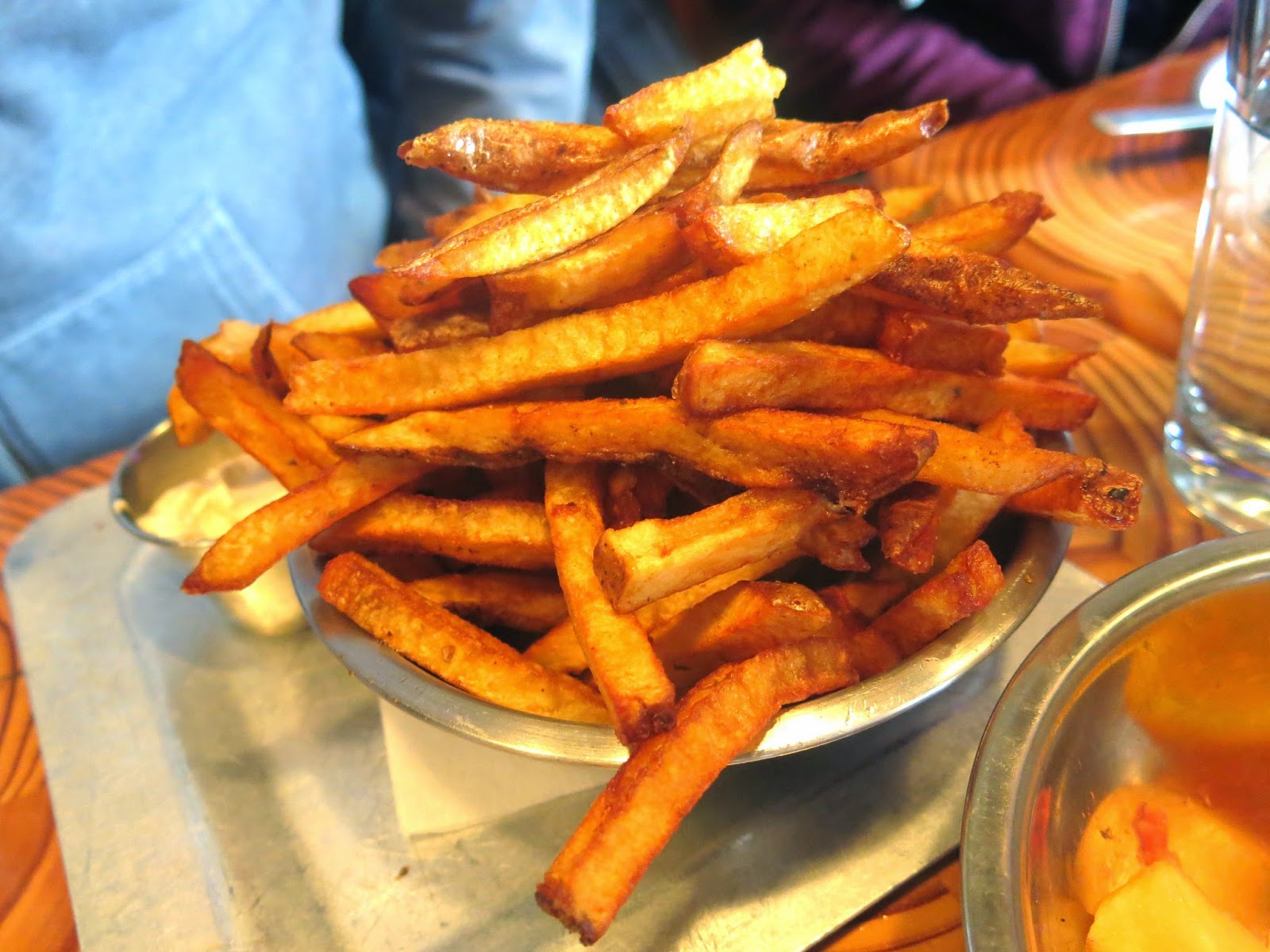 More snacks began to appear at the table as Brocco chatted away about his weather machine.  First there were the Seasoned Fries with their delightful sprinkle of Old Bay and a side of aioli for dipping.  They weren't necessarily crispy, but their texture was still plenty firm, and made for a nice change from the flash frozen potato sticks some other restaurants try to pass off as a side dish to a sandwich.  There was also a decadent Cinnamon Roll which had been stuffed with bacon in some sort of mad science experiment gone right.  Normally Brandy prefers a softer cinnamon bun, but this one was hard most of the way through because of its extreme caramelization, which gave a creme brulee like crunch to each bite.  "I think the center is entirely bacon," Brocco laughed awkwardly as his and Brandy's forks met on the plate.  "You still a vegetarian?" Brandy asked with a cock of her eyebrow.  "He was yesterday," Brassica  laughed.  "I'm not sure anymore, to be honest," Brocco whimpered, hesitating just long enough for Brandy to scoop up the bacon laden bite. 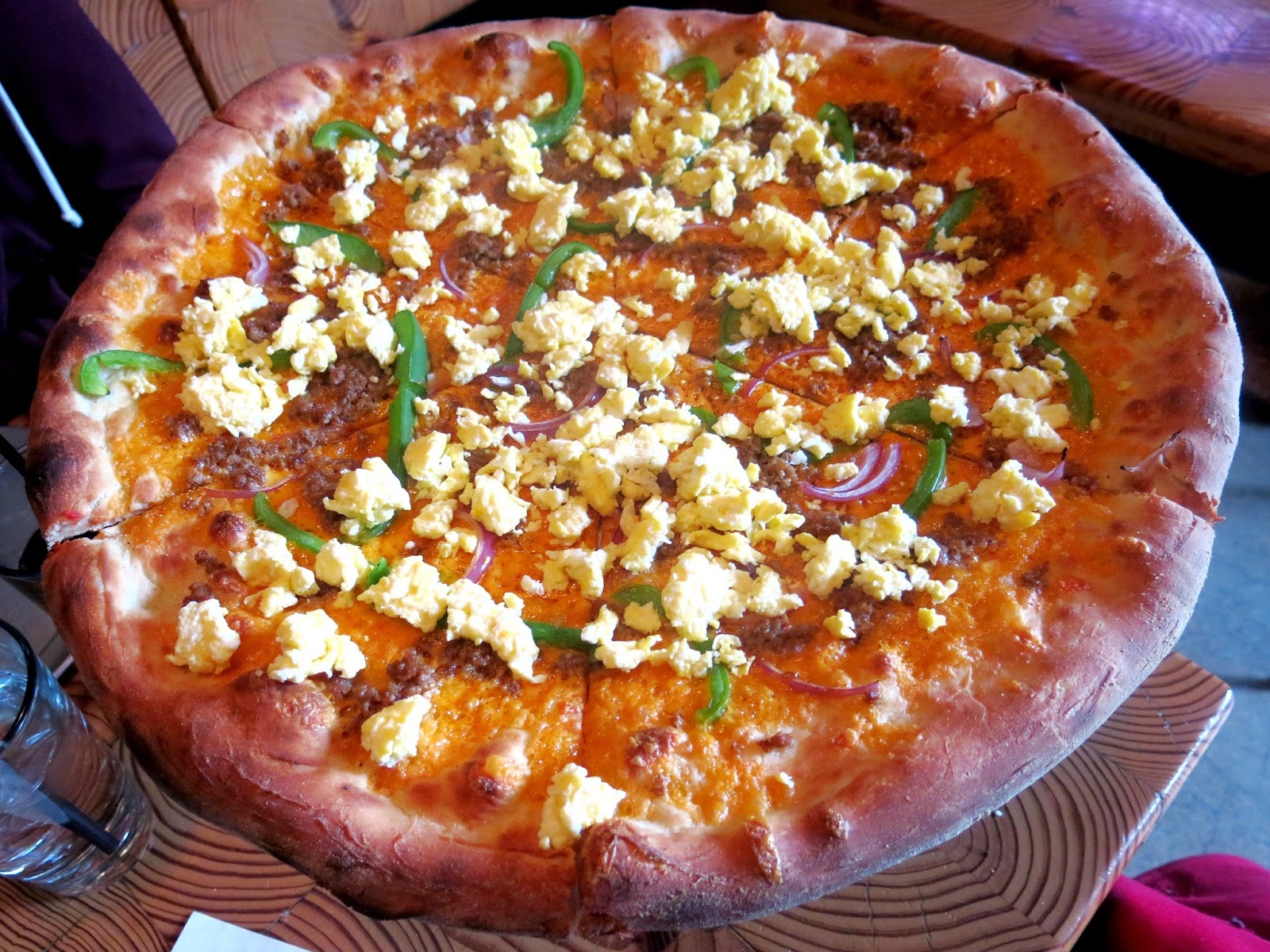 The "pizza" de resistance was the Breakfast Pizza, which came dressed with sausage, scrambled egg, cheddar cheese, and green peppers and red onions fresh from the farmer's market.  The pie was certainly an impressive sight.  For being loaded with such an array of toppings, the pizza was surprisingly light because of the thin crust, with the sausage and pepper flavors being the most prominent.  "I actually would't mind a bit more weight to this," Brandy commented, "Maybe a bit of sauce or a gooier cheese?  If there is one thing I don't want to be a polite, delicate eating experience, its a pizza." 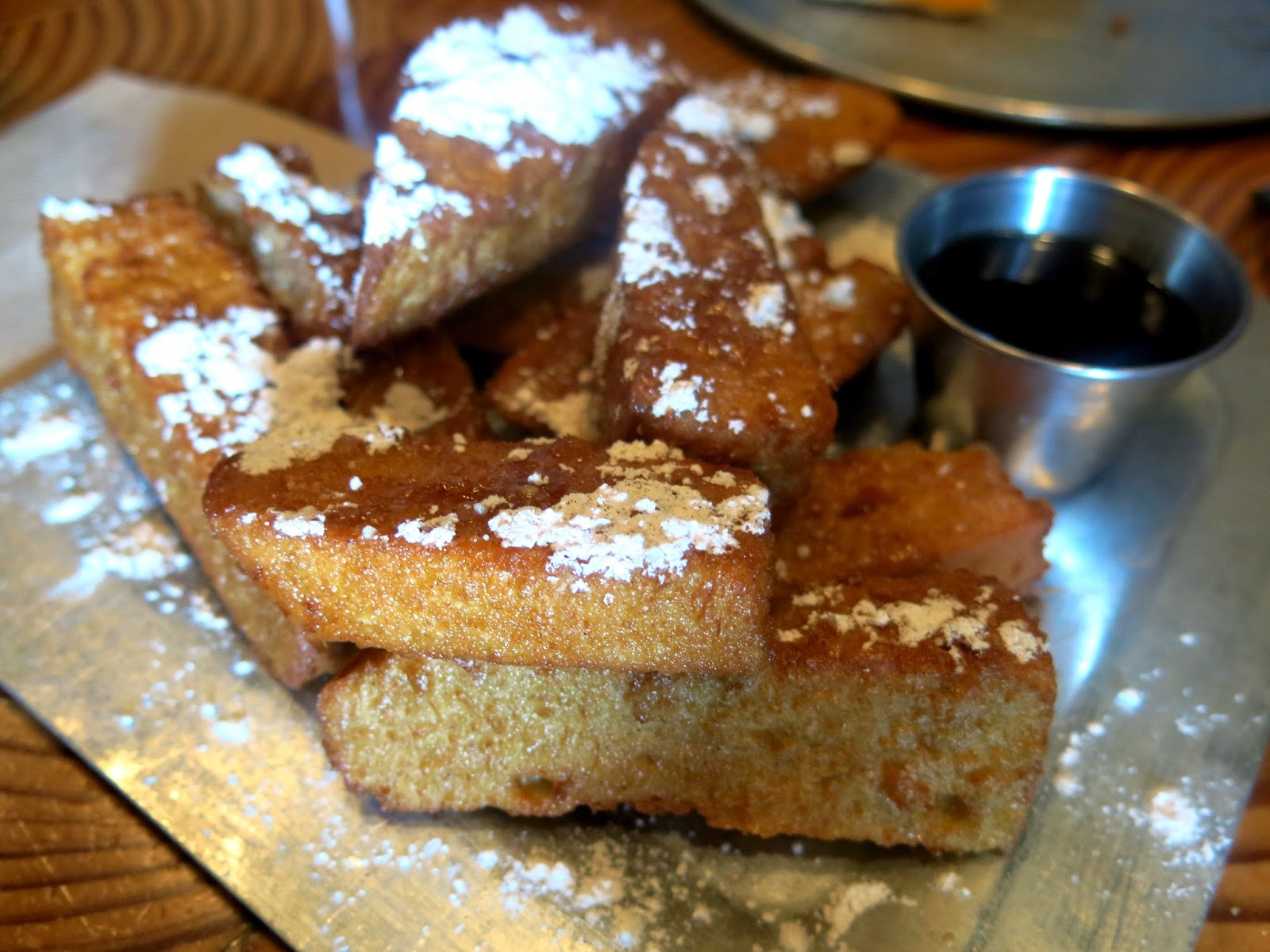 Just when they thought they couldn't handle any more, the group was presented with a plate of French Toast Sticks.  The sticks had actually been deep fried rather than pan fried, meaning they had a beautiful even golden brown color and a light crispness all the way around and a soft center.  The French toasts were appropriately accompanied by some maple syrup for dipping and sprinkled with a snowfall of powdered sugar, which Brandy immediately managed to get all over herself.

"Well, I hope you feel properly rewarded for your contributions to an early Chicago defrost," Brandy said to Brocco and Brassica as they exited Boiler Room.  Considering the extremely reasonable prices, the fun casual dishes, and quick service, Brandy made a metal note to return to Boiler Room in order to continue rewarding Brocco for his good work with the weather machine.  "Now, if you can just set that do-hickey of yours to a mild summer, I'd greatly appreciate it," Brandy told Brocco and Brassica.  "Oh that weather machine doesn't work," said Brassica, "I bumped into weeks and ago and the whole thing fell apart.  Right now it's being held together with super glue and duct tape."  "But...if we didn't flip the "Spring" switch... then how did Spring arrive so promptly?" Brocco queried.  "The aliens, of course," said Brassica, and Brandy began to wonder just how strong that Jamiseson ice cream had really been. 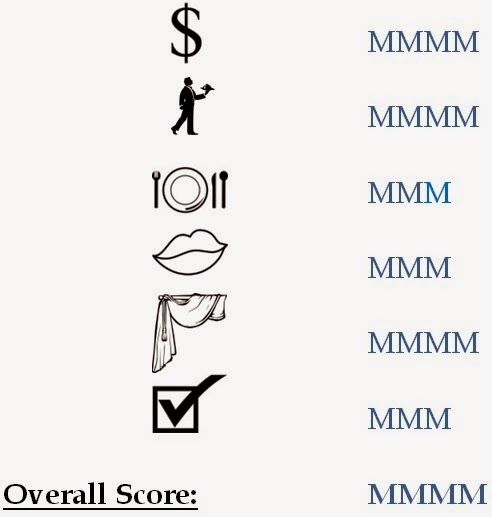