Kokopelli or Dancing off to Baja 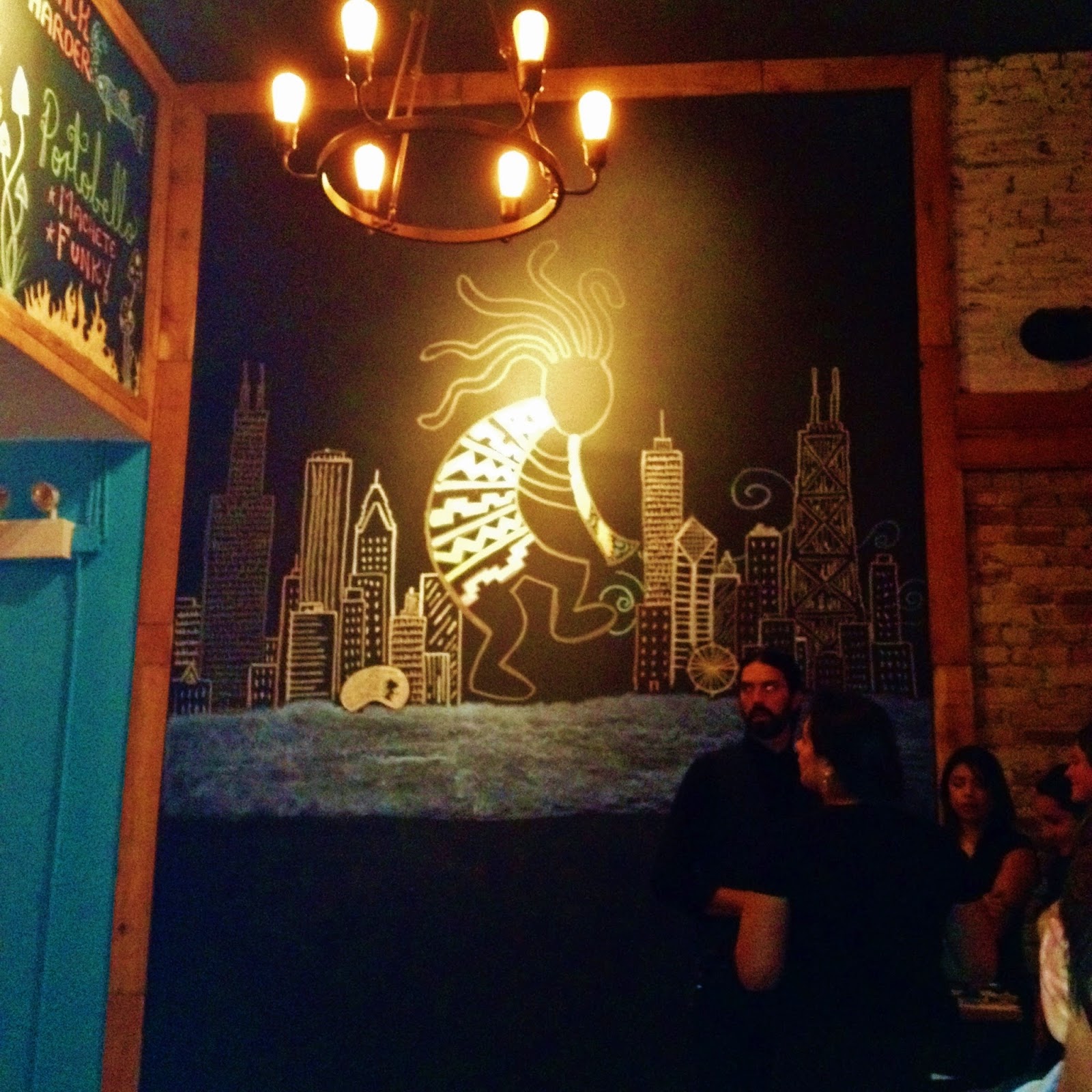 It was a cold, blustery fall day when Brandy ran into her old friend, Brocco Leigh Binto (eccentric scientist and inventor extraordinaire) outside of a Blue line stop on Milwaukee.  "You're looking especially...tanned," Brandy commented, eyeing up his unusually golden skin.  "I just got back from InVenCon.  It was in Tijuana this year," Brocco beamed.  "InVenCon?" Brandy questioned.  "The Invention Convention!" Brocco explained, "The biggest and best festival for professional inventors to get together and share our latest innovations.  Though, the sharing part doesn't happen so much between the fellows who haven't finished their patenting process, but that's understandable, I suppose.  In any case, the trip's given me a craving for Baja style food.  Know anywhere good?" "I think I've got just the place for you," Brandy grinned.

She took Brocco down the road a little ways to the newly opened Kokopelli, the first US location of a popular series of restaurants in Mexico, all serving fresh Baja inspired food with an emphasis on seafood and handmade tacos.  Brandy had been interested to try out Kokopelli for herself, especially as seeing how Chicago has become a battle ground for some of the most highly regarded taco joints this side of the Mason-Dixon line.


Kokopelli had a bright and vibrant interior with warm lighting and high ceilings.  The space was open and spaced out so that patrons weren't on top of each other.  Brandy took a good, hard look at the giant chalk drawing of a kokopelli on the wall near the door, remembering fondly a certain time in her life when she was hitchhiking across South America and ended up one night dancing with a man who claimed to be a Hopi chief in a discotheque in Mexico City.  As her mind wandered to the figure he had tattooed on his arm (it was a fertility symbol, he told her), Brocco began to worry about the glazed look on her face and quickly made a big fuss of coughing and adjusting his water glass, which eventually brought Brandy back to reality. 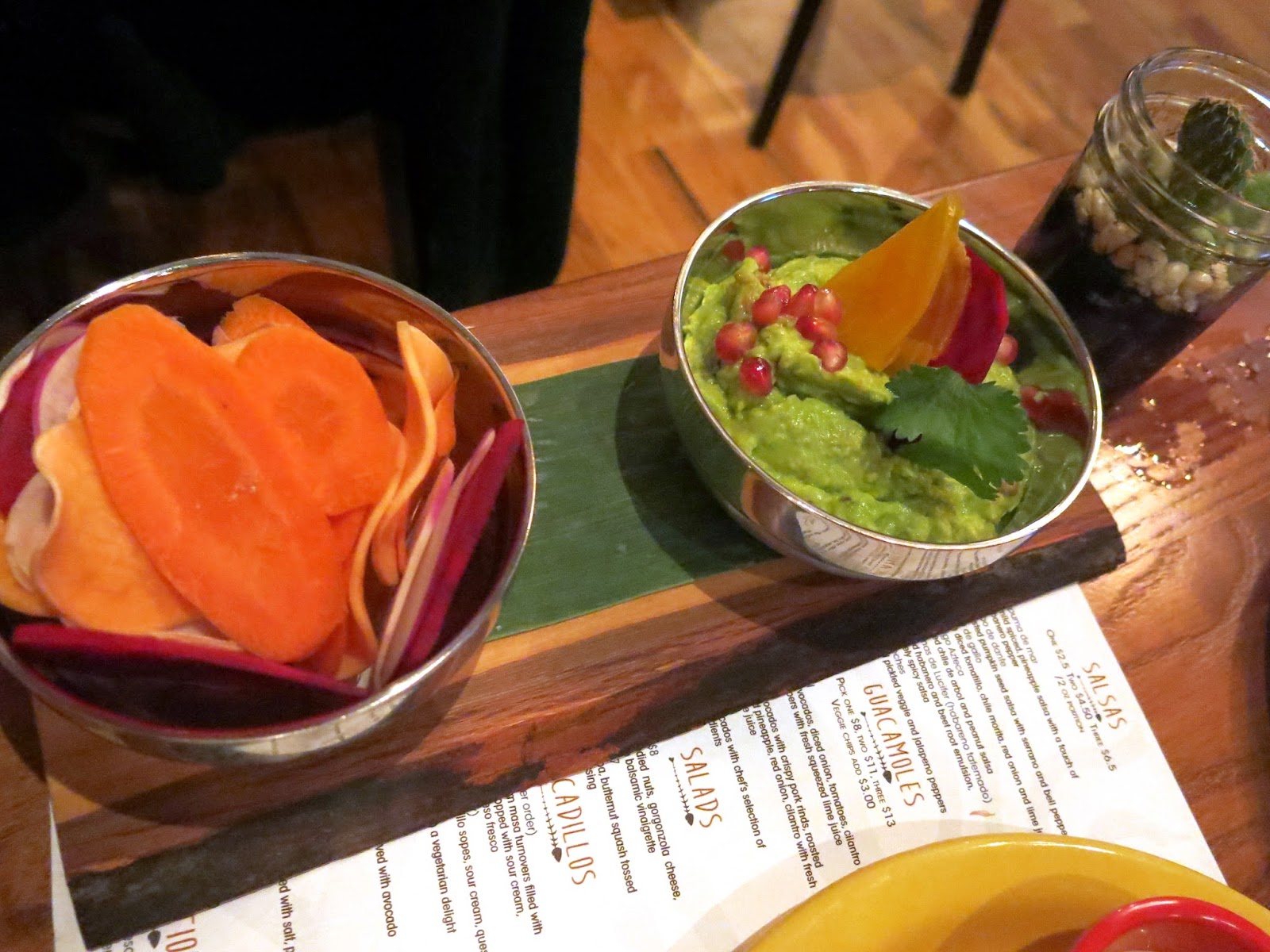 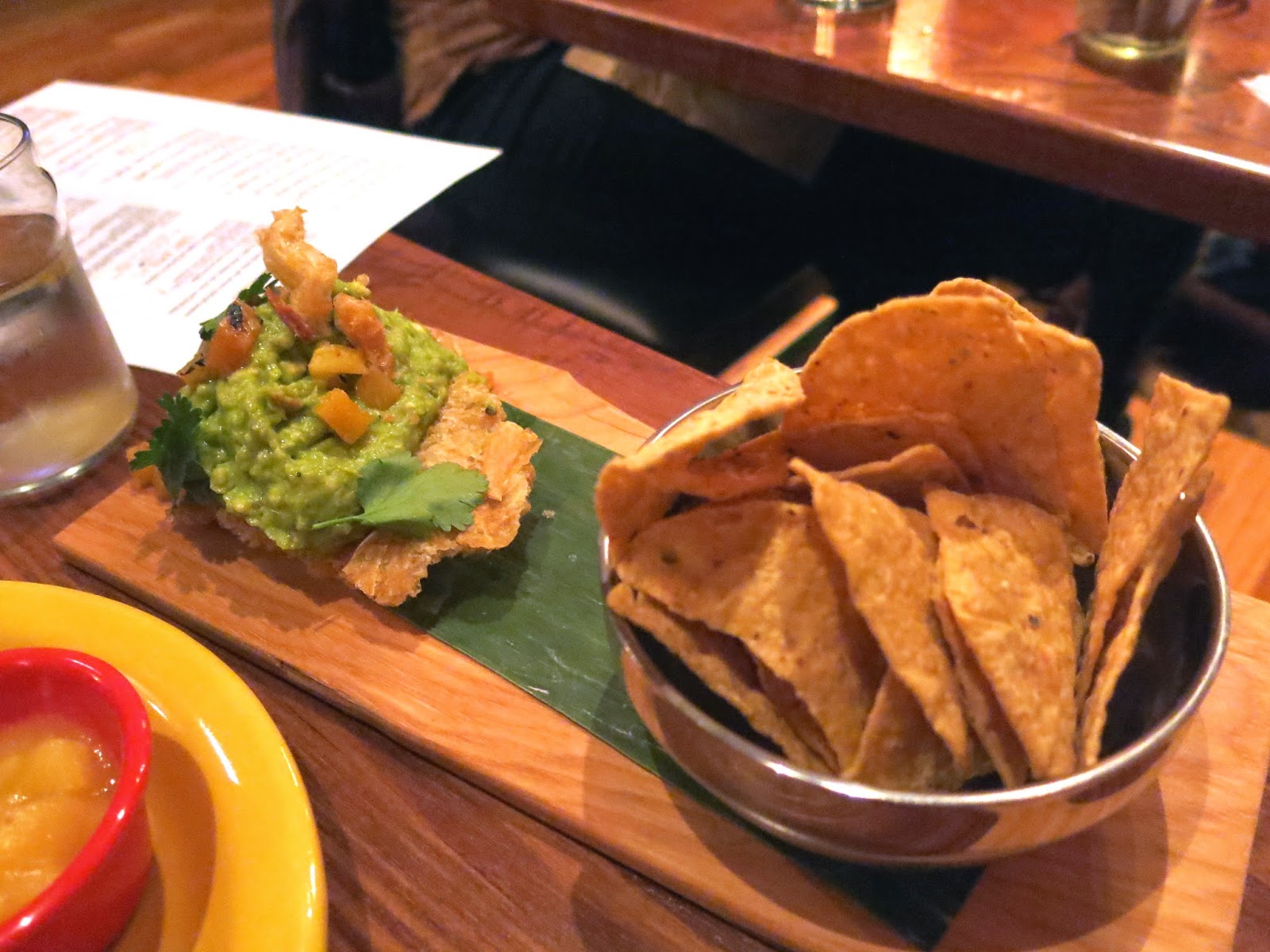 The meal started off with two of the house guacamoles; the Chicarron and the Seasonal.  The Seasonal was a fairly traditional guac, although it came garnished with some beautiful pomegranate seeds, and served with a side of Veggie Chips, which consisted of thick slices of root vegetables like carrots, beets, and radishes, that provided a nice bit of crunch and color.  The Chicarron guac was a little more spicy with a little touch of sweetness from chunks of pineapple.  This guac came with a side of the house made tortilla chips, but also a gigantic deep fried pork rind, hence it's name.  "I do enjoy an edible condiment holder," Brandy said, breaking off a piece of the crunchy fried pig skin. 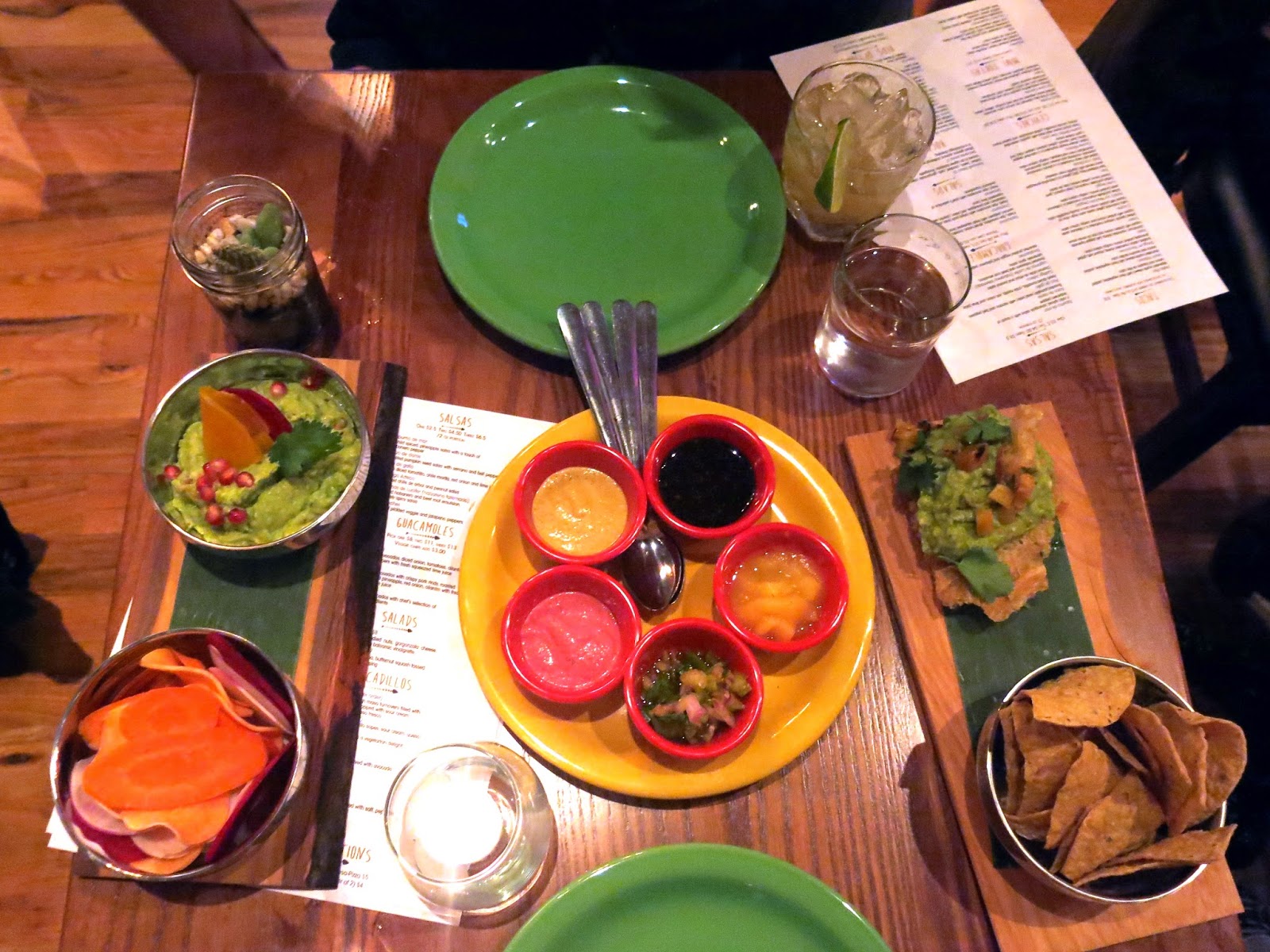 Next came the rainbow of house made salsas.  Brandy's favorite were the Espuma de Mar, a bright and acidic pineapple salsa with plenty of heat from habanero pepper and the Robo de Dante, a nutty almost soy sauce like concoction with pumpkin seeds and serrano peppers.  Brocco favored the charred chili and peanut infused Castigo Azteca, which almost resembled satay sauce, and the Lagramis de Lucifer, the spiciest salsa on the menu with a pink color that denoted its heat like the neon markings on a poisonous Amazonian tree frog.  Brandy watched with a raised eyebrow as Brocco shoveled a chip piled high with the devil sauce into his mouth and smiled wide as sweat broke out on his forehead.  "It's the chemical reaction of the capsaicin that really fascinates me," Brocco said before his throat began to close up. 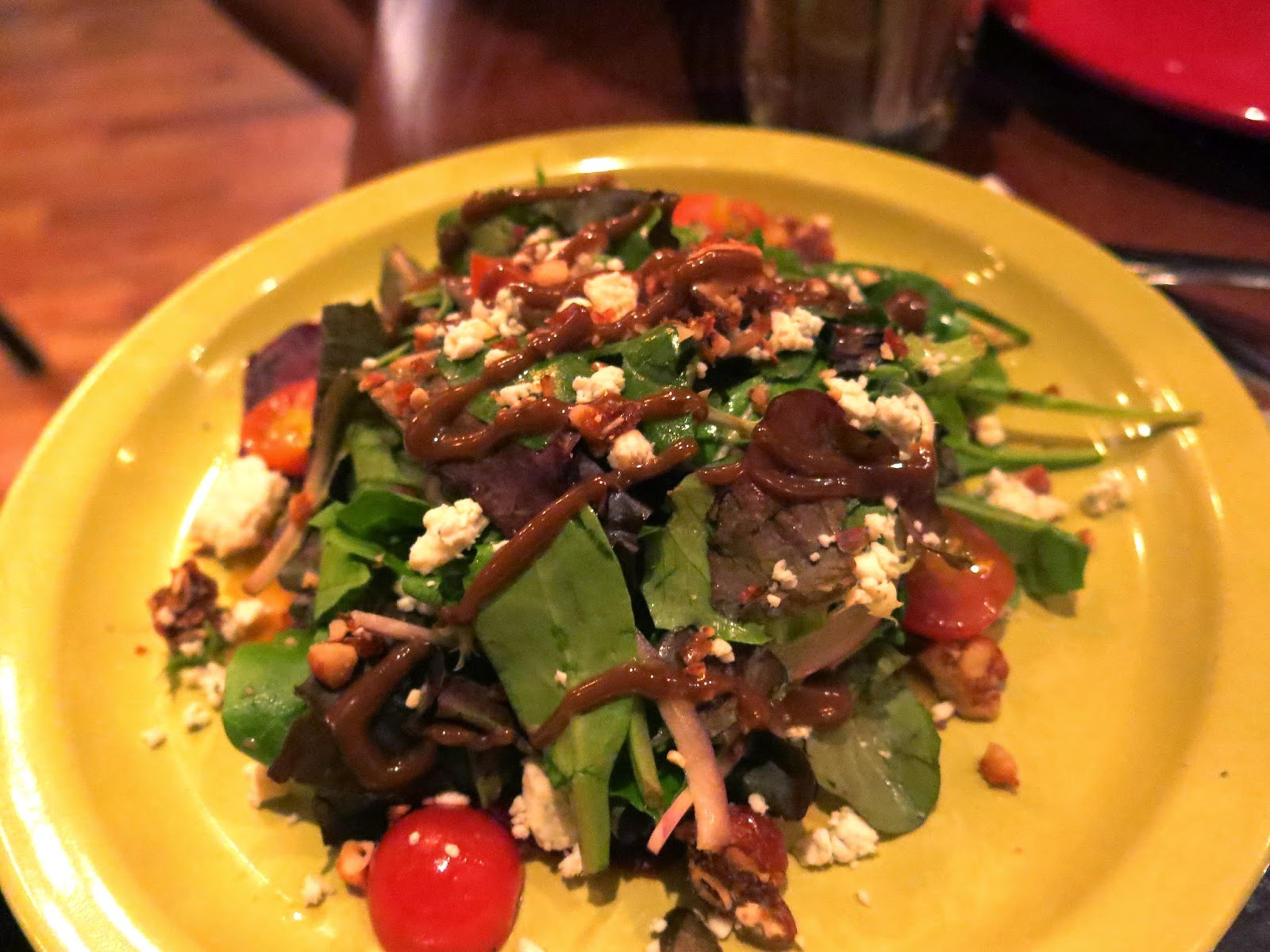 Next came the Kokopelli Salad with mixed greens, grilled beets, candied pecans, cherry tomatoes, gorgonzola cheese, and a balsamic vinaigrette.  Brandy very much appreciated the mix of salty, sweet, and tangy in the salad, as well as the different textures.  "It's always nice when a salad is more than just over dressed greens," Brandy said, eyeing the larger portion of salad she had willing given to Brocco (he is a vegetarian, so Brandy did want to make sure he had his fill of what he could have). 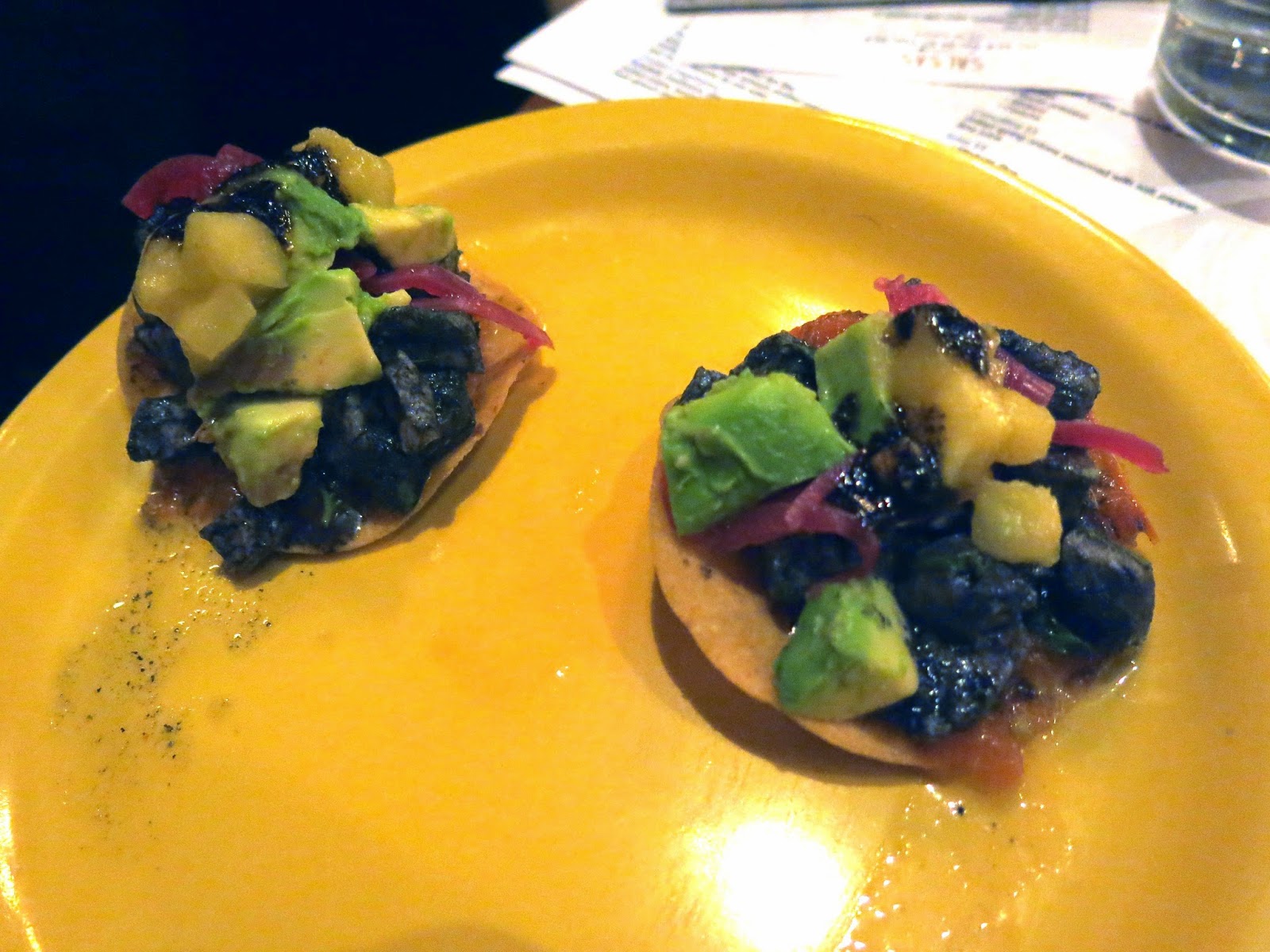 The following course was two of the three Ceveches on the menu: a fish of the day with squid ink, pickled onion, and dressed with the pineapple and pumpkin seed salsas, and an octopus with avocado, tomatoes, and pepper.  Brandy did like the freshness of these ceveches, which both had a nice citrus tang without being too acidic, and the seafood itself was all very fresh and tender. 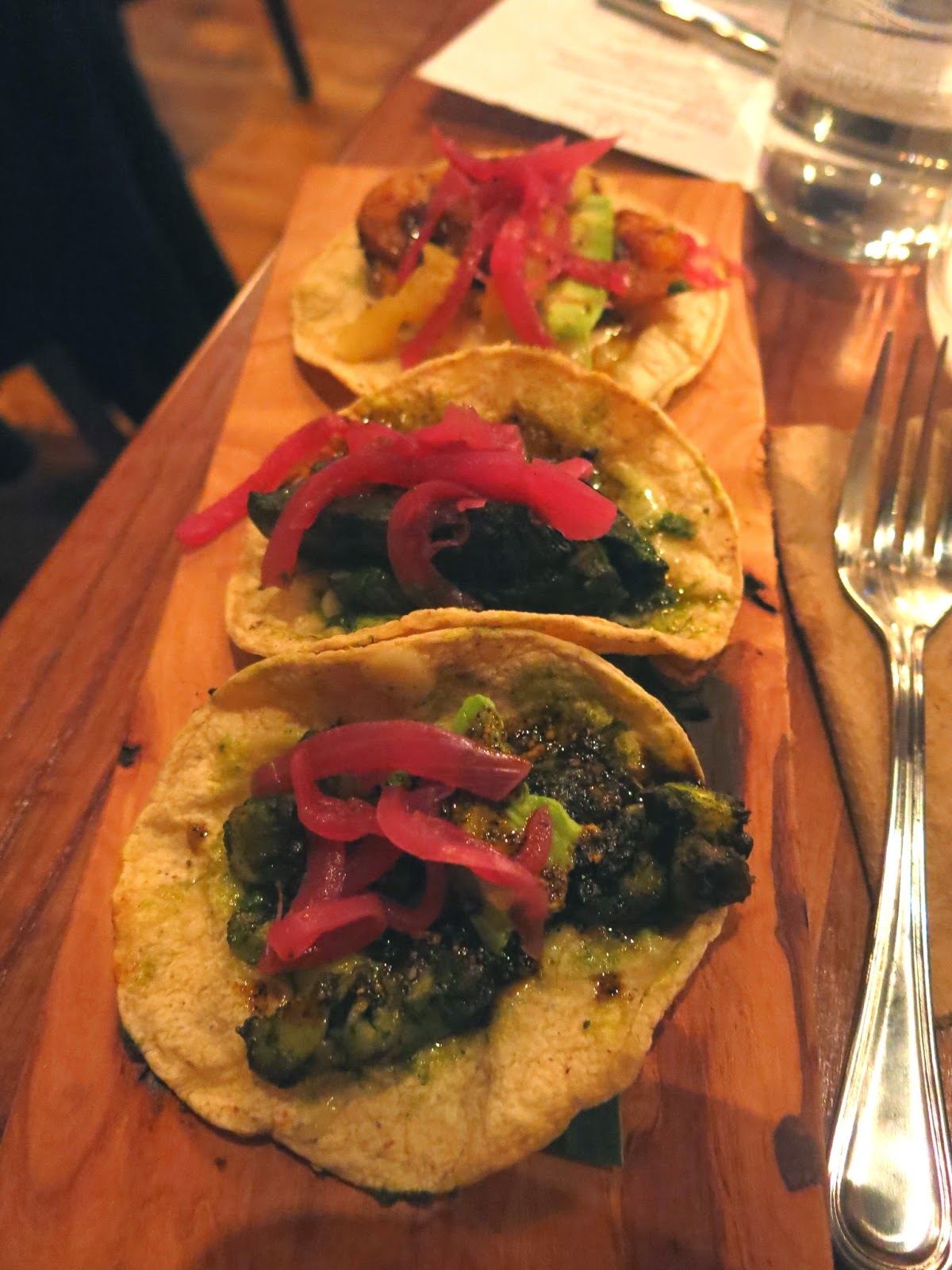 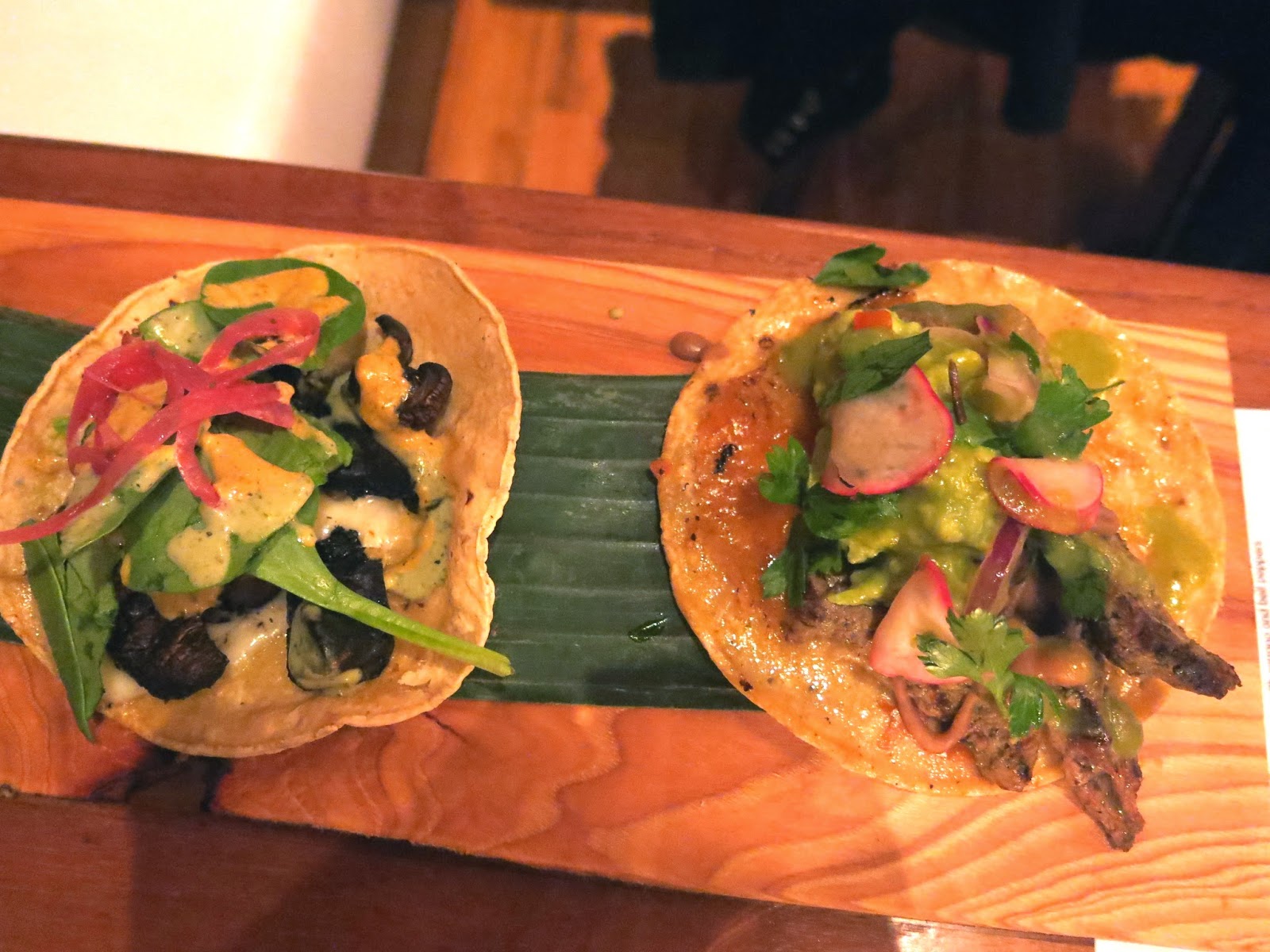 The main course was a parade of tacos.  Brandy's favorites included the Steak a las Brasas with a green salsa, grilled rib eye, and a chimicurri sauce, the Gringo en Vacaciones with grilled shrimp, adobo sauce, and pineapple with a charred pepper, and the Chicken Mixteca with baby spinach, a creamy poblano sauce, and pickled radish.  Brocco, who got to taste both of the vegetarian tacos, favored the Italiano con Machete with roasted portobello mushroom, Mexican pesto, and pickled red onion.  "I do appreciate that there are two vegetarian choices, I just wish they weren't both mushroom," Brocco said, "They both taste good, they're just very similar." 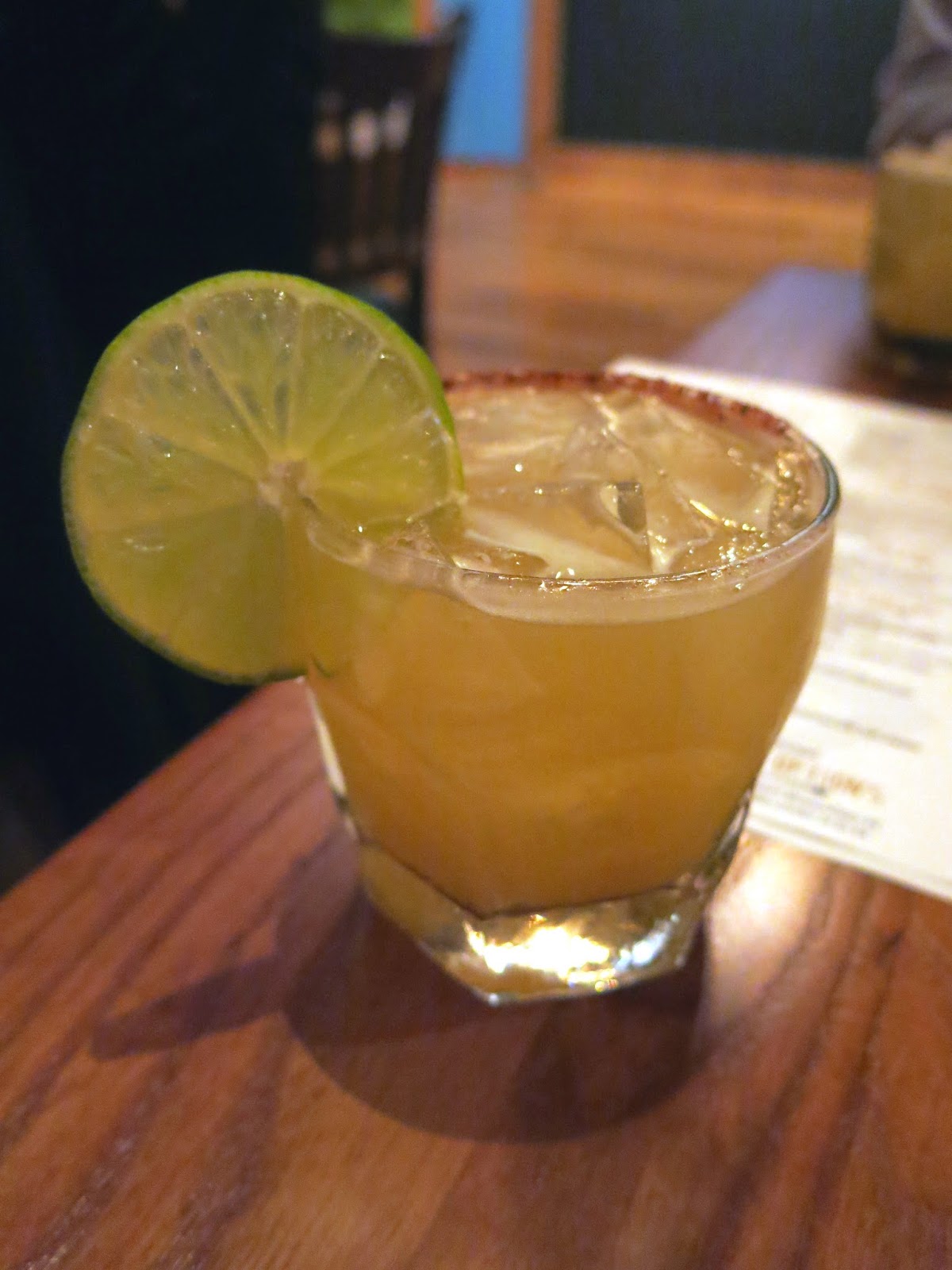 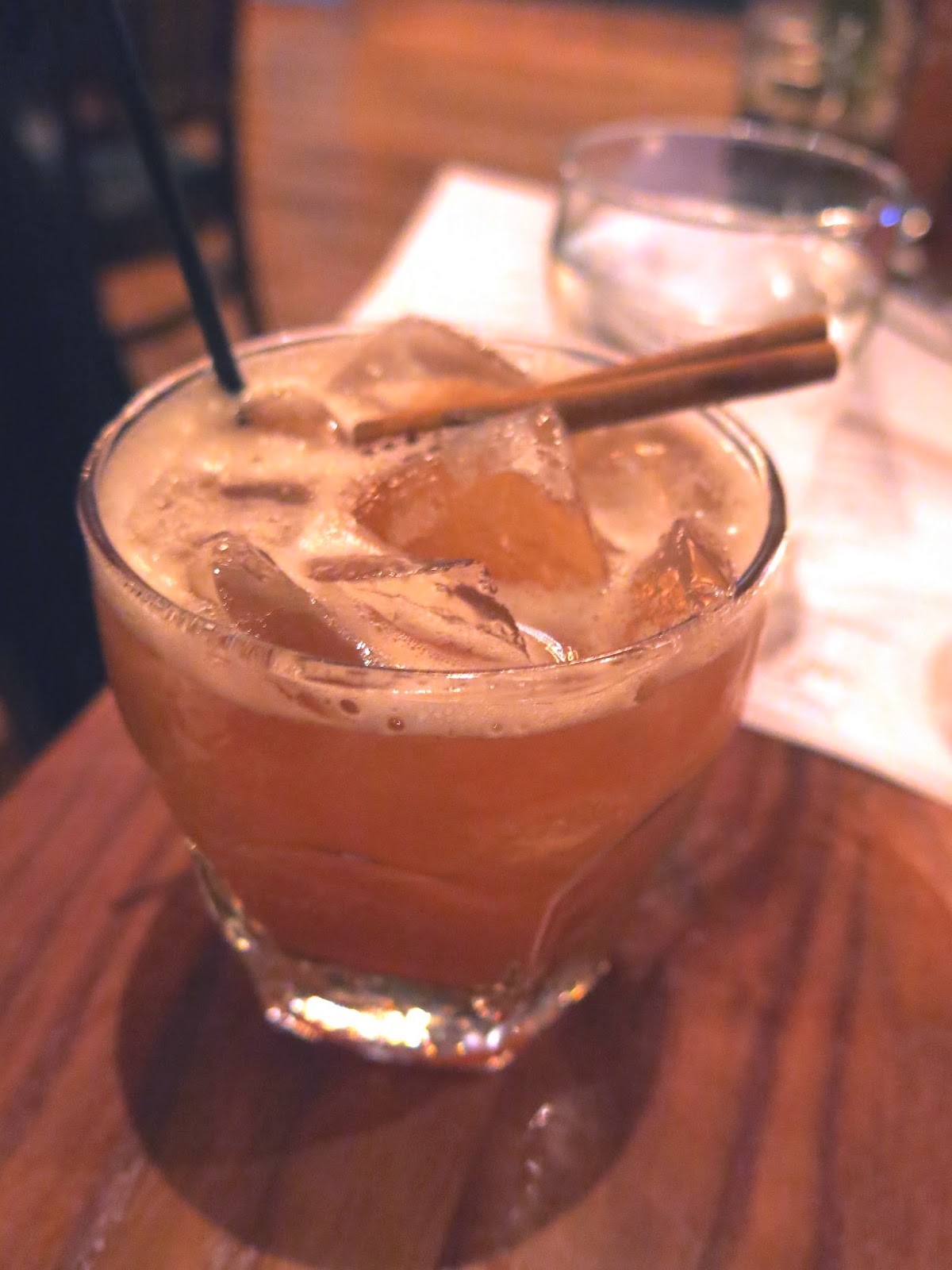 Throughout the meal, Brocco and Brandy sampled from the cocktail menu as well.  The TJ Sour was particularly nice with a good mix of fruit and citrus flavors that wasn't overwhelmingly sweet.  The El Dandy was probably the favorite of both Brocco and Brandy, as it had a nice smoked flavor with just a hint of cherry, lemon, and a good warming aftertaste of cinnamon (in fact, Bocco and Brandy enjoyed the El Dandy so much, they ordered a second round of it). 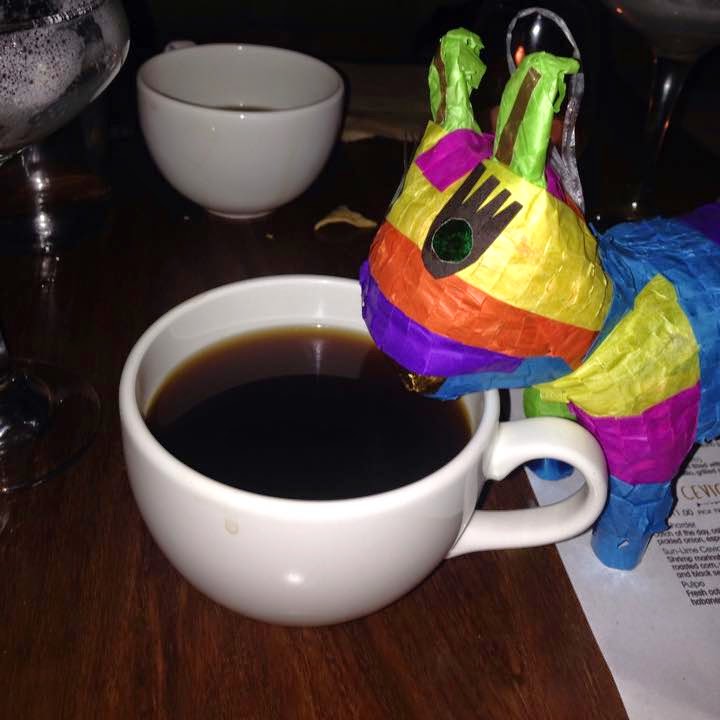 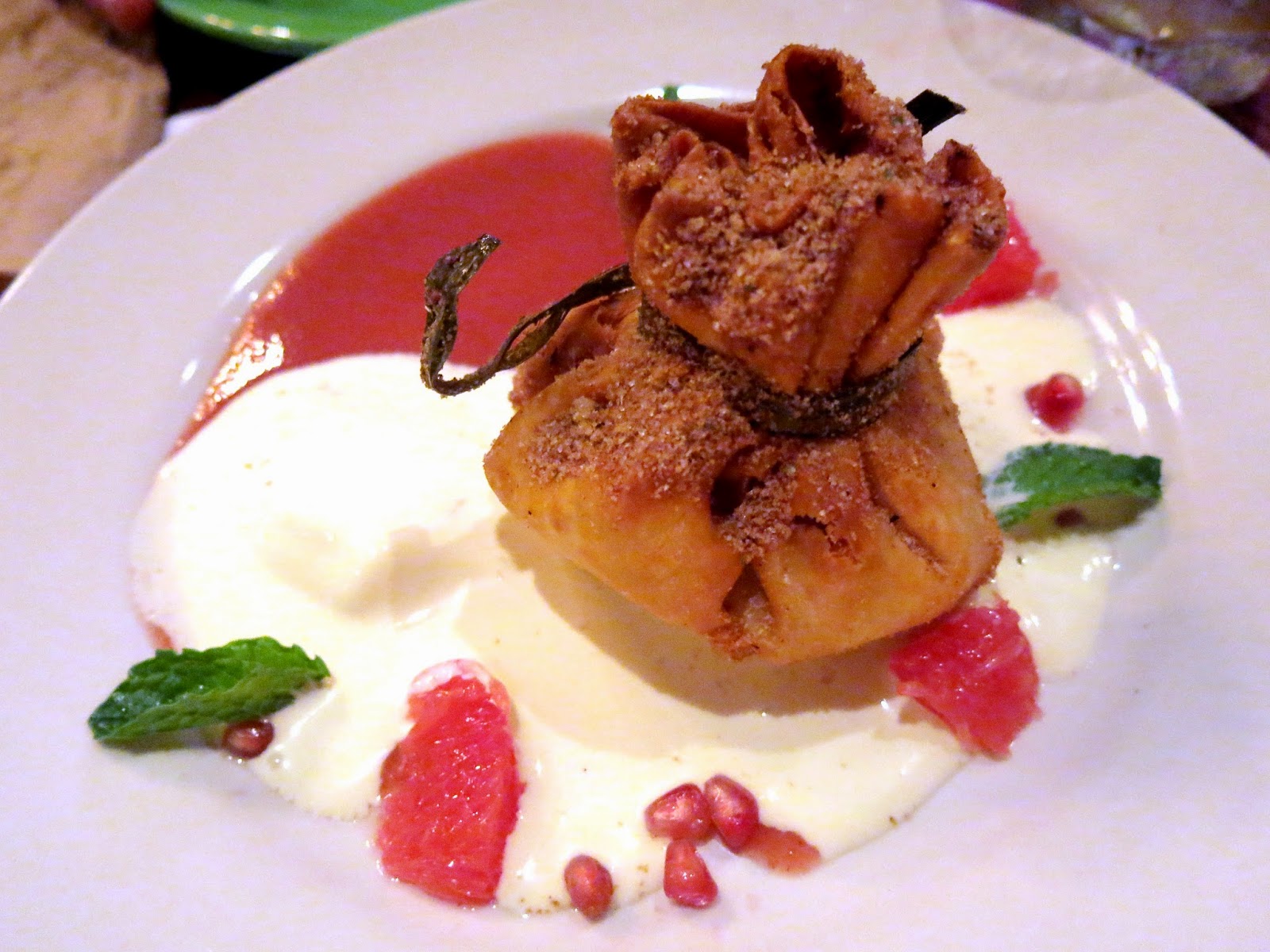 Lastly was the dessert, the Sweet Chimichanga, a sort of begger's purse filled with roasted fruit and sweet cheese, coated in cinnamon sugar, and served with a vanilla creme anglais, grapefruit segments, and pomegranate seeds.  After such bold flavors in the rest of the food, Brandy actually appreciated that the dessert was more subtle, playing more on textures from the crunchy and chewy purse, the creamy sauce, and the tender fruit.  Dessert also came served with a big cup of sweet Mexican coffee, which Brandy found deeply comforting.

Back out in the cold streets of Chicago, Brandy found herself instantly wishing to be back inside Kokopelli with its warming food and satisfyingly uncomplicated drinks.  "Well, that certainly did quench my desire for Baja style food!  I feel like I was just in Tijuana all over again." Brocco proclaimed happily.  Indeed, with such fresh ingredients, colorful presentations, and welcoming staff, Brandy did feel as though someone would be hard pressed to find such excellent food outside of Mexico.  "I think we'll have to make a return trip to try those salsas again, just to make sure we liked them," Brandy winked, and as though the Lagramis de Lucifer in his system had heard her, Brocco's face suddenly grew bright pink and a bead of sweat sprang to life on his forehead. 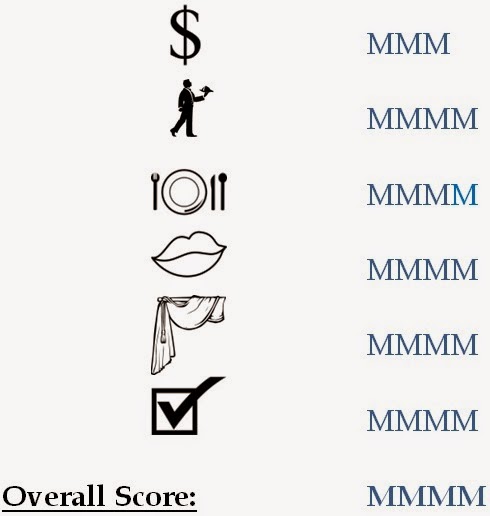