There are may secret societies in this world.  Free Masons, The Priory of Sion, the Illuminiati; the list goes on and on.  Some are more secretive than others, and some are operating under the very noses of the general public.  How many of these organizations Brandy is a part of, she will never admit to, but there is one not so secret society she will proudly proclaim her membership to: The Chicago Food Bloggers.  When gathered together, the members of this prestigious organization perform secret rituals (known as the Dance of the Cameras), speak in code ("Where have you been lately?" is their traditional greeting) and plot world domination one plate at a time.  Wait... forget we mentioned that last one.

Recently, a group of Chicago Food Bloggers were invited to dinner at Azzurra in Wicker Park and Brandy was positively honored to join them.  "I know my main expertise is in brunch, so I don't always get these invites, but everyone's got to have dinner eventually," as Brandy said, "And what better time to have it than with a group of Grade A food enthusiasts?" 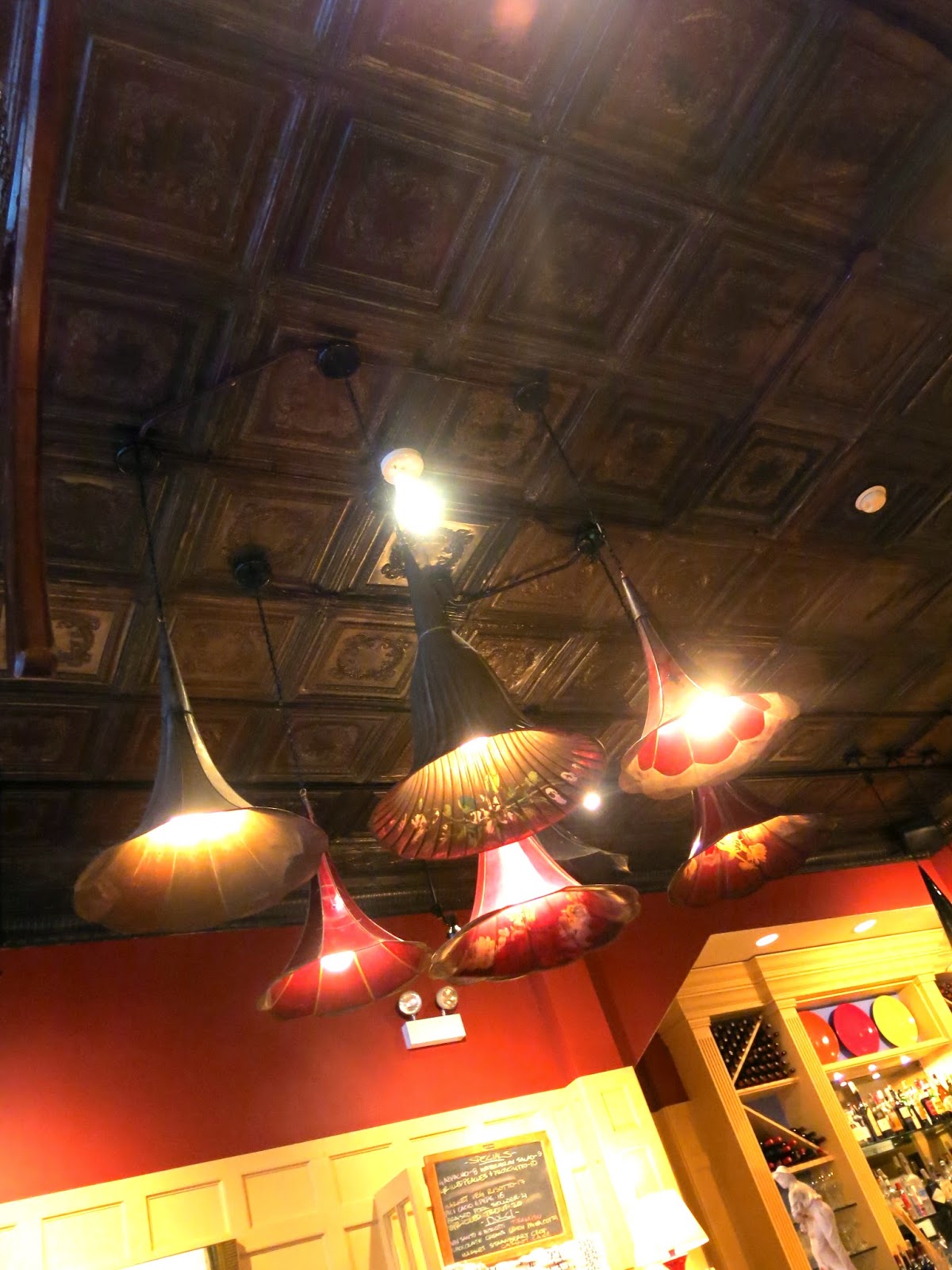 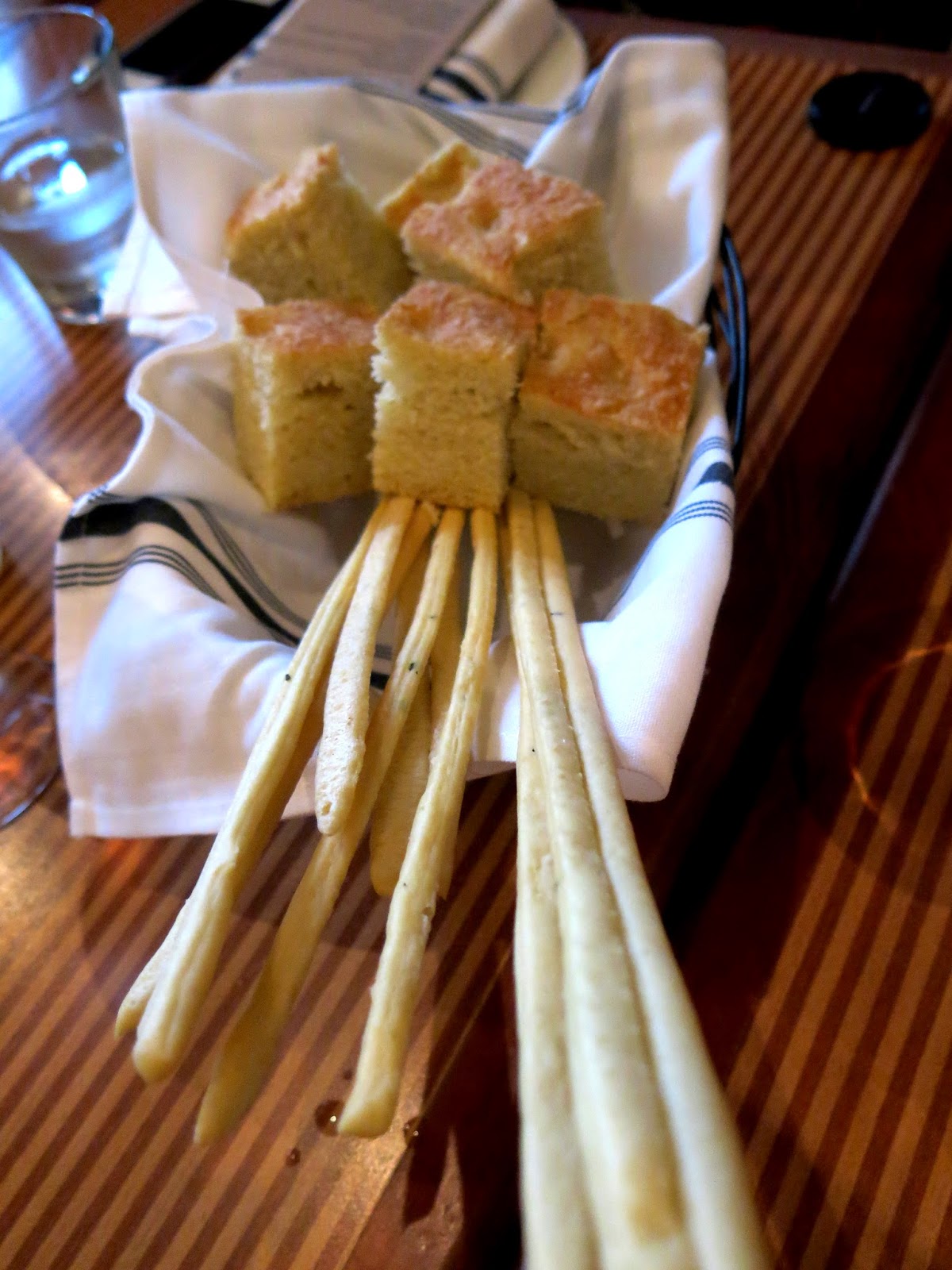 The evening started off with a quite lovely bread basket for the table and some sparkling rosé.  The group took the time to admire the beautiful interior of Azzurra, which gave the impression that one was dining al fresco by the seaside in Tuscany.  Several bright paintings of beaches and oceans hung on the white washed walls and the gorgeous antiqued tin ceilings held blow glass light fixtures that looked as if large exotic flowers were blooming from it. 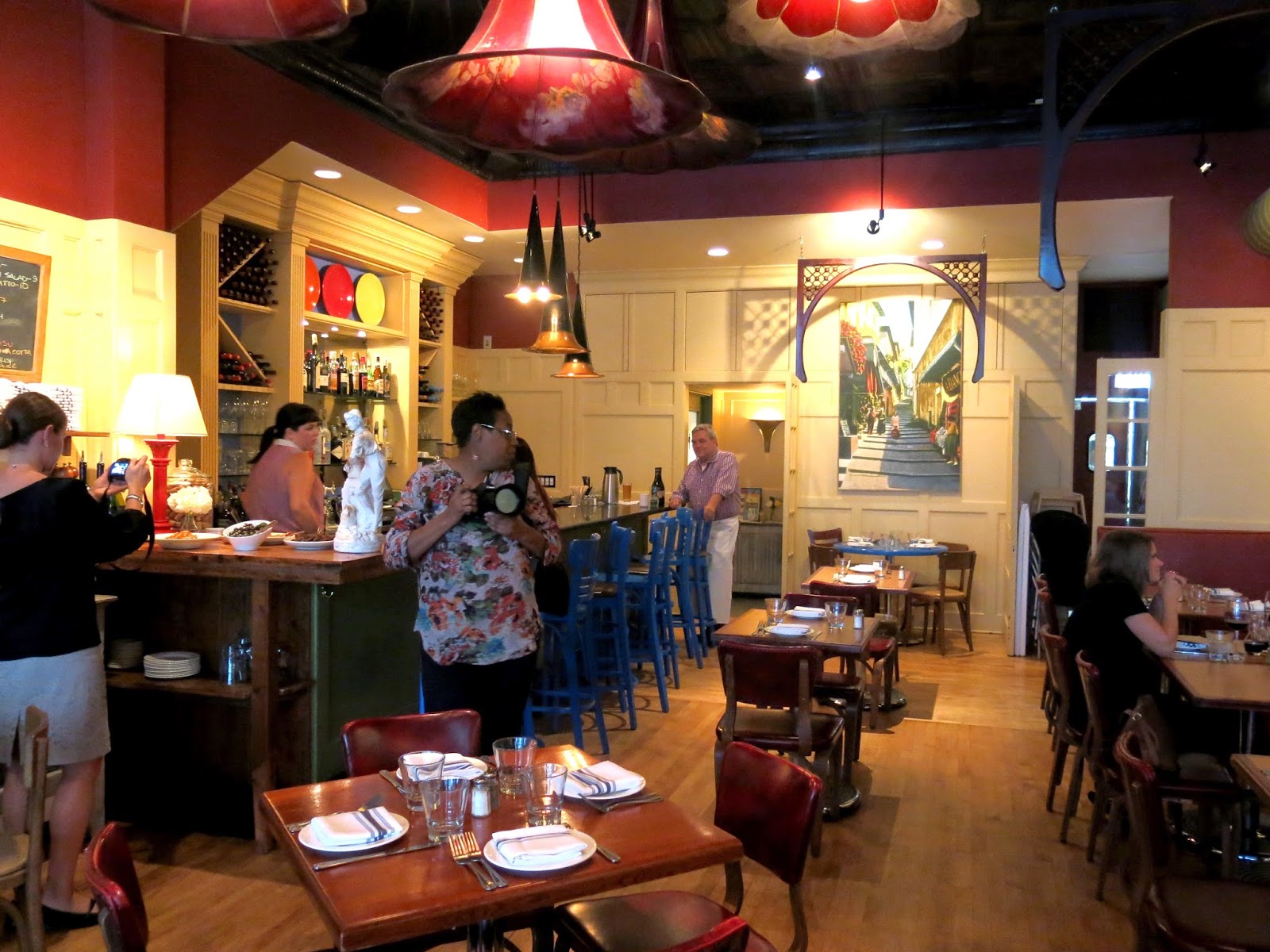 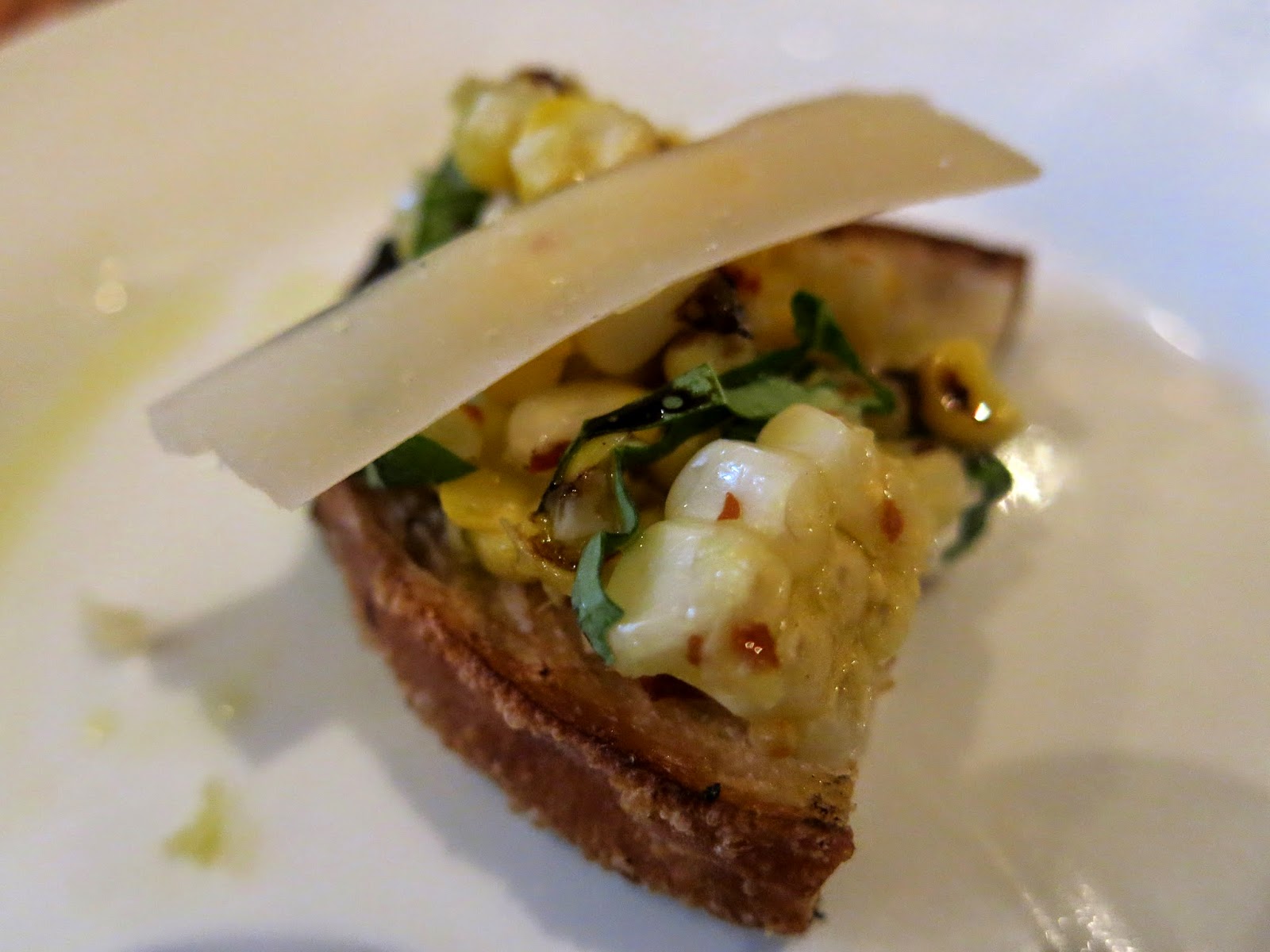 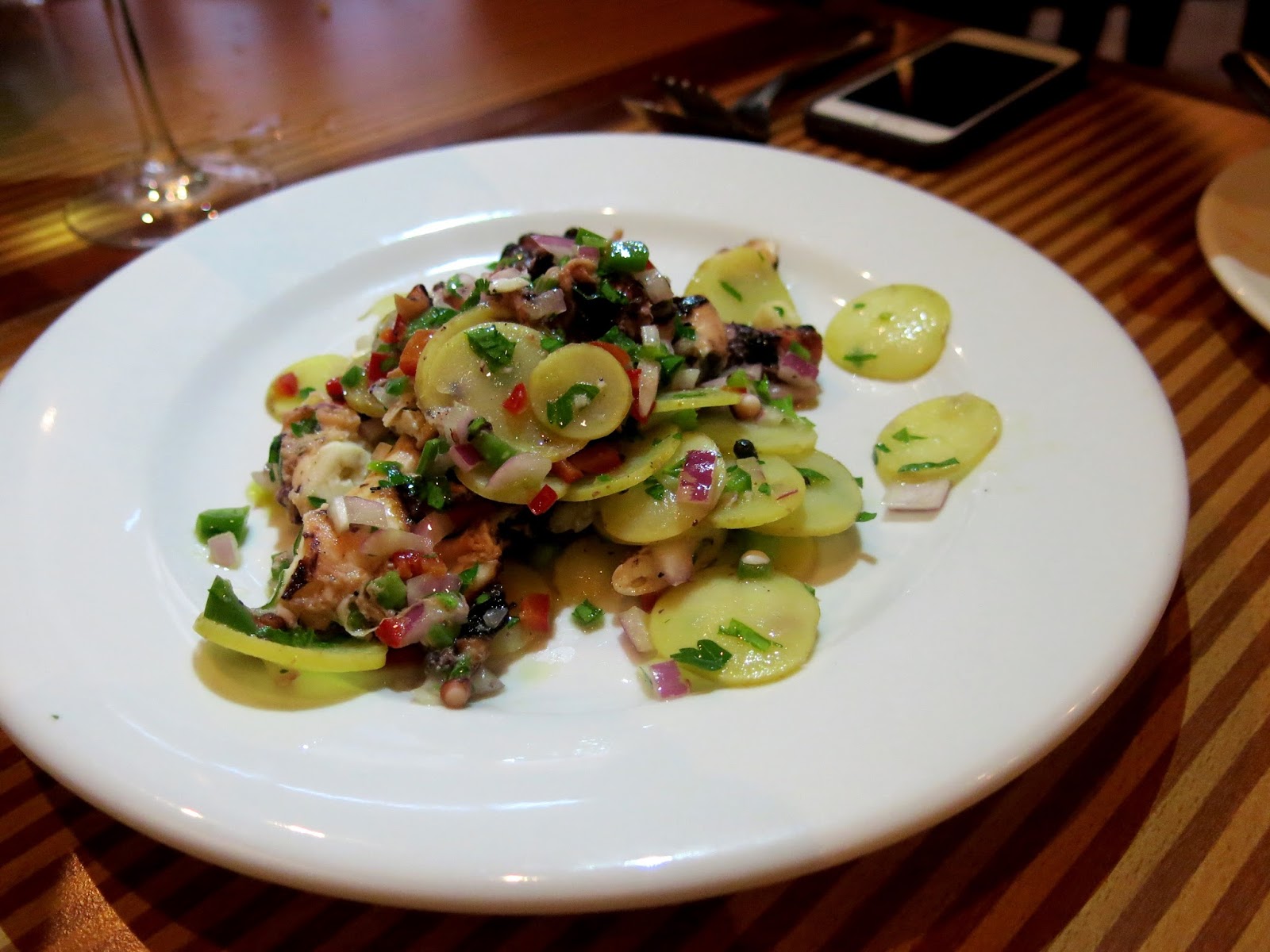 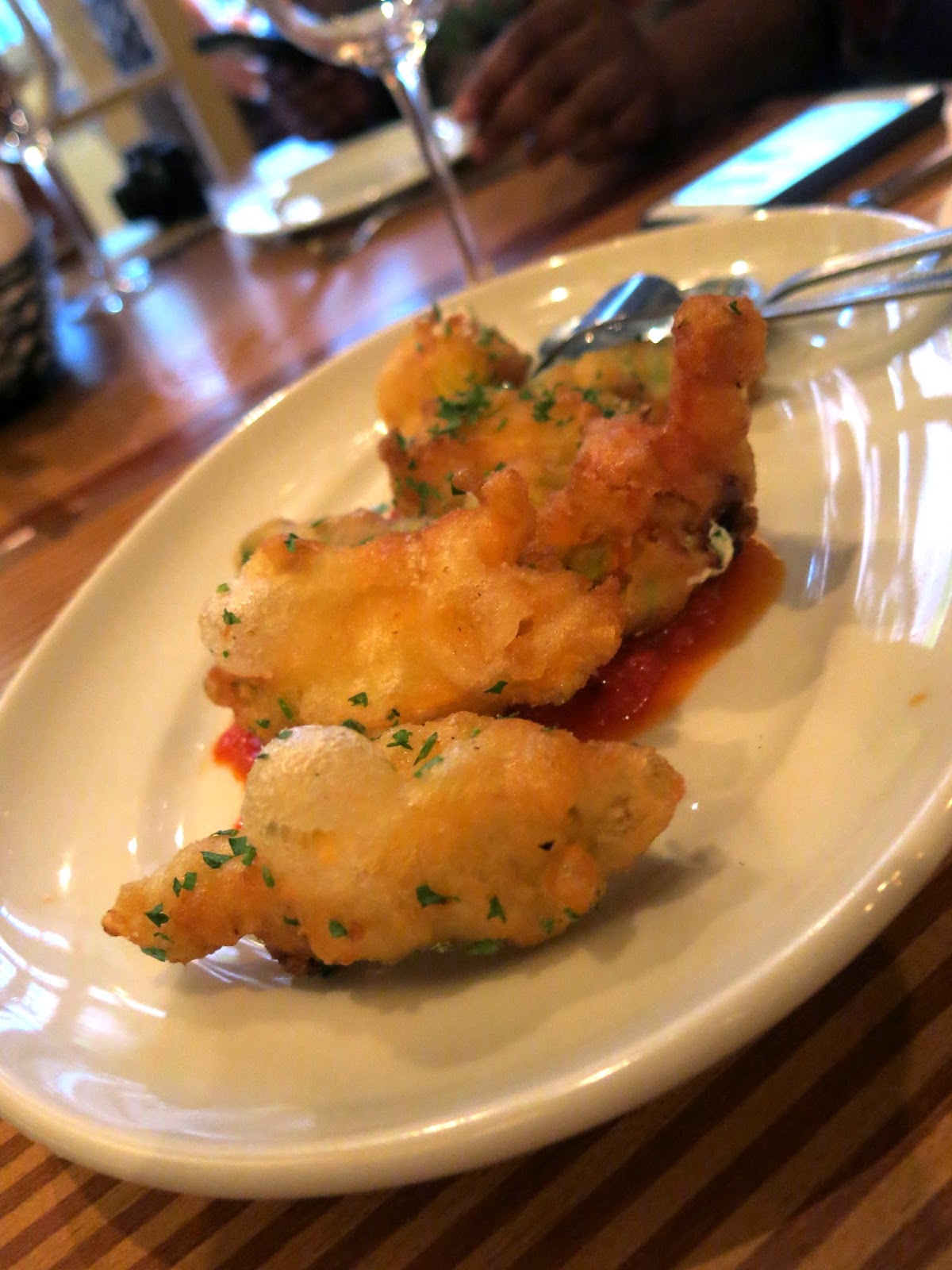 The first course consisted of four dishes: a Market Corn Bruschetta, a Watermelon Salad, Grilled Octopus, and Fried Zucchini Blossoms,  Everything was so incredibly fresh and light that the daunting task of trying all four dishes for one course of what promised to be a multitude of deliciousness to come soon seemed a simple task.  The Watermelon Salad was a refreshing mix of melon, tomato, cucumber, basil, and goat cheese, which made everyone sigh about the last vestiges of summer fading away.  The Corn Bruschetta was a lovely twist on a classic, making use of the corn's inherent sweetness as well as a nutty and buttery shaved cheese on the top to counteract the smoky, toasted bread.  The Grilled Octopus was possibly the most visually appealing of the dishes, being small tender pieces of octopus mixed with thinly sliced fingerling potatoes, herbs, red onion, and olive oil.  The favorite of the table by far was the Fried Zucchini Blossoms, which came stuffed with ricotta cheese and served with a chunky tomato sauce, which were so light, crispy, and creamy that a request for seconds of these delectable bites was inevitable. 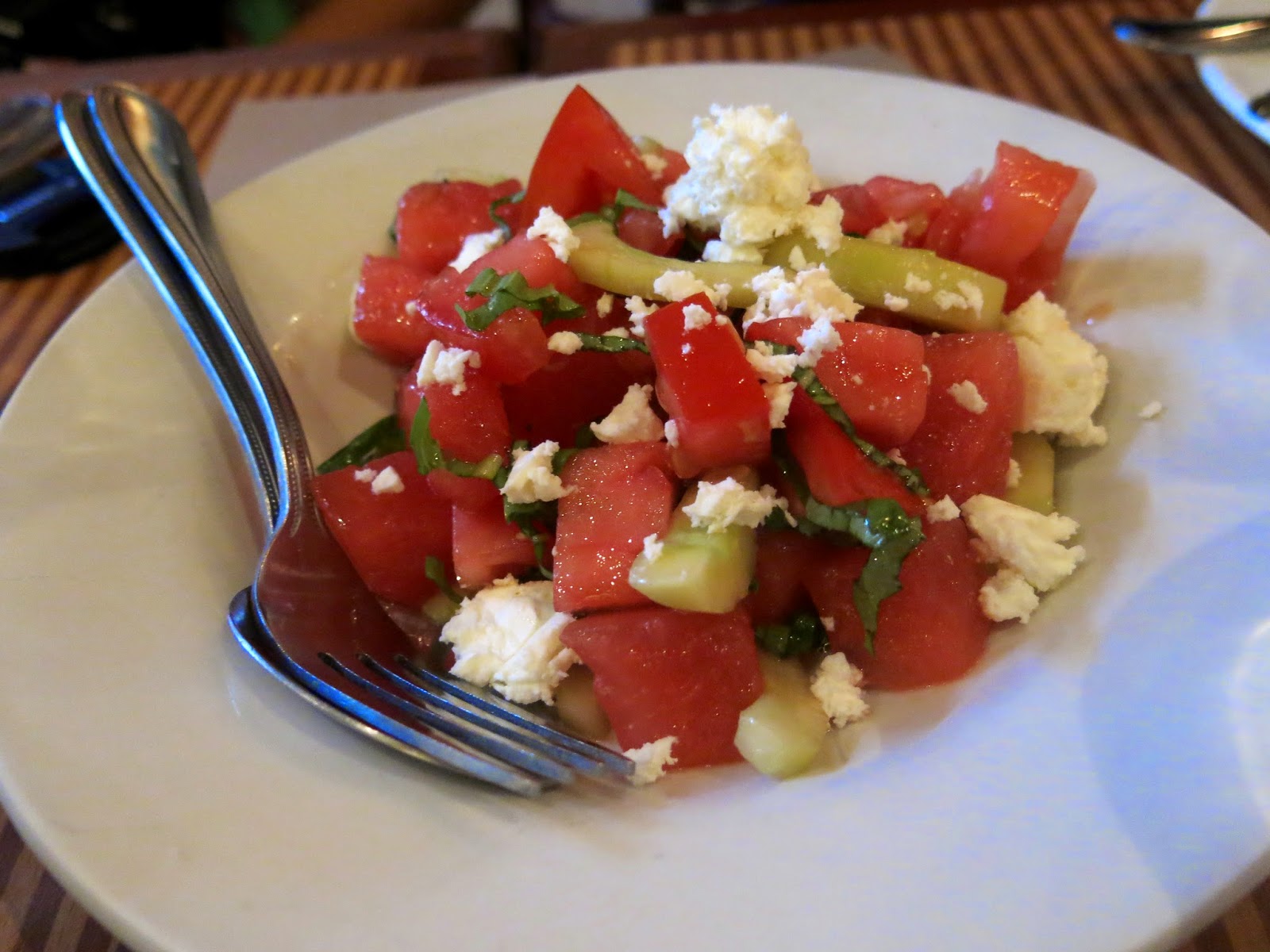 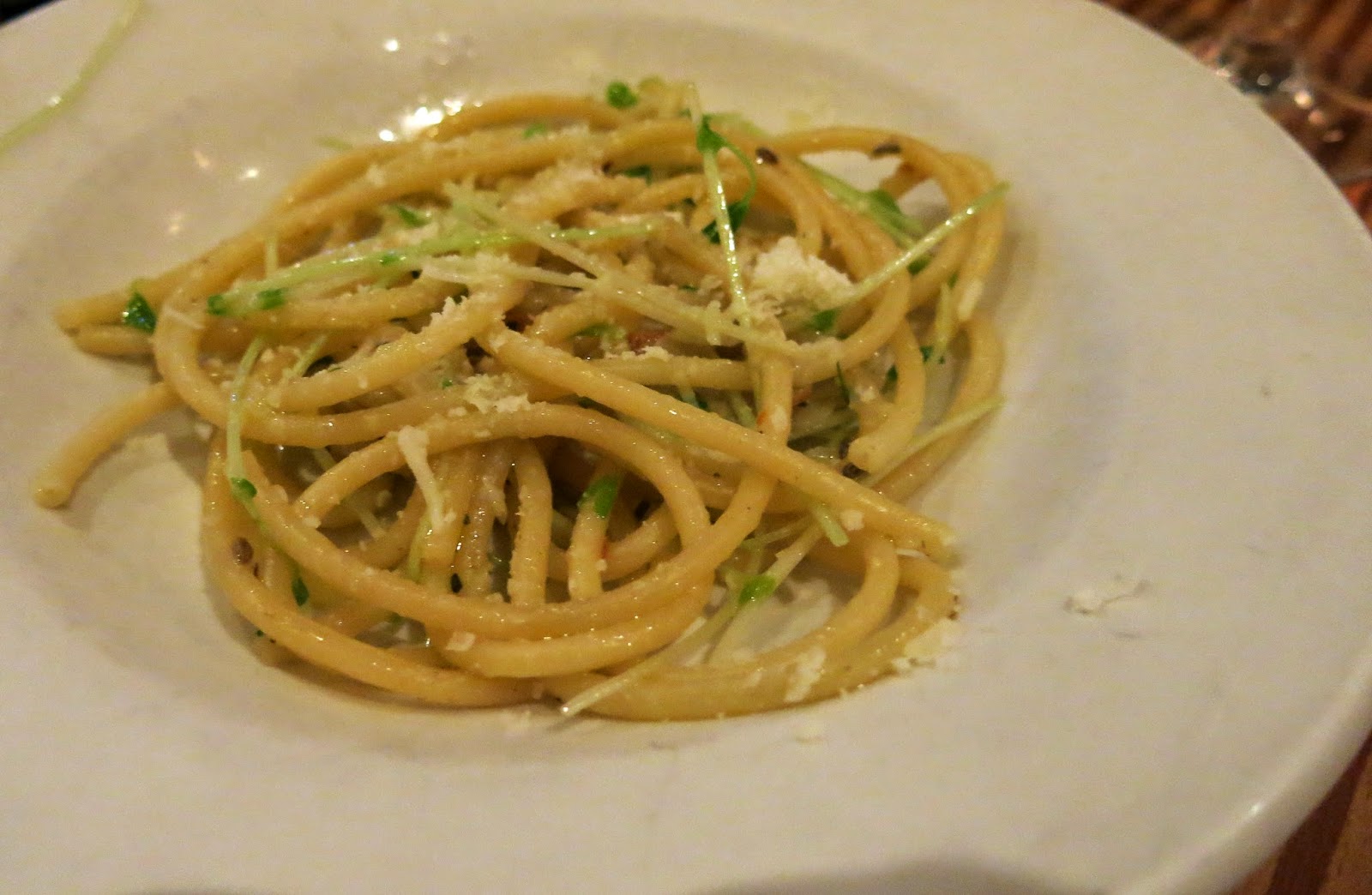 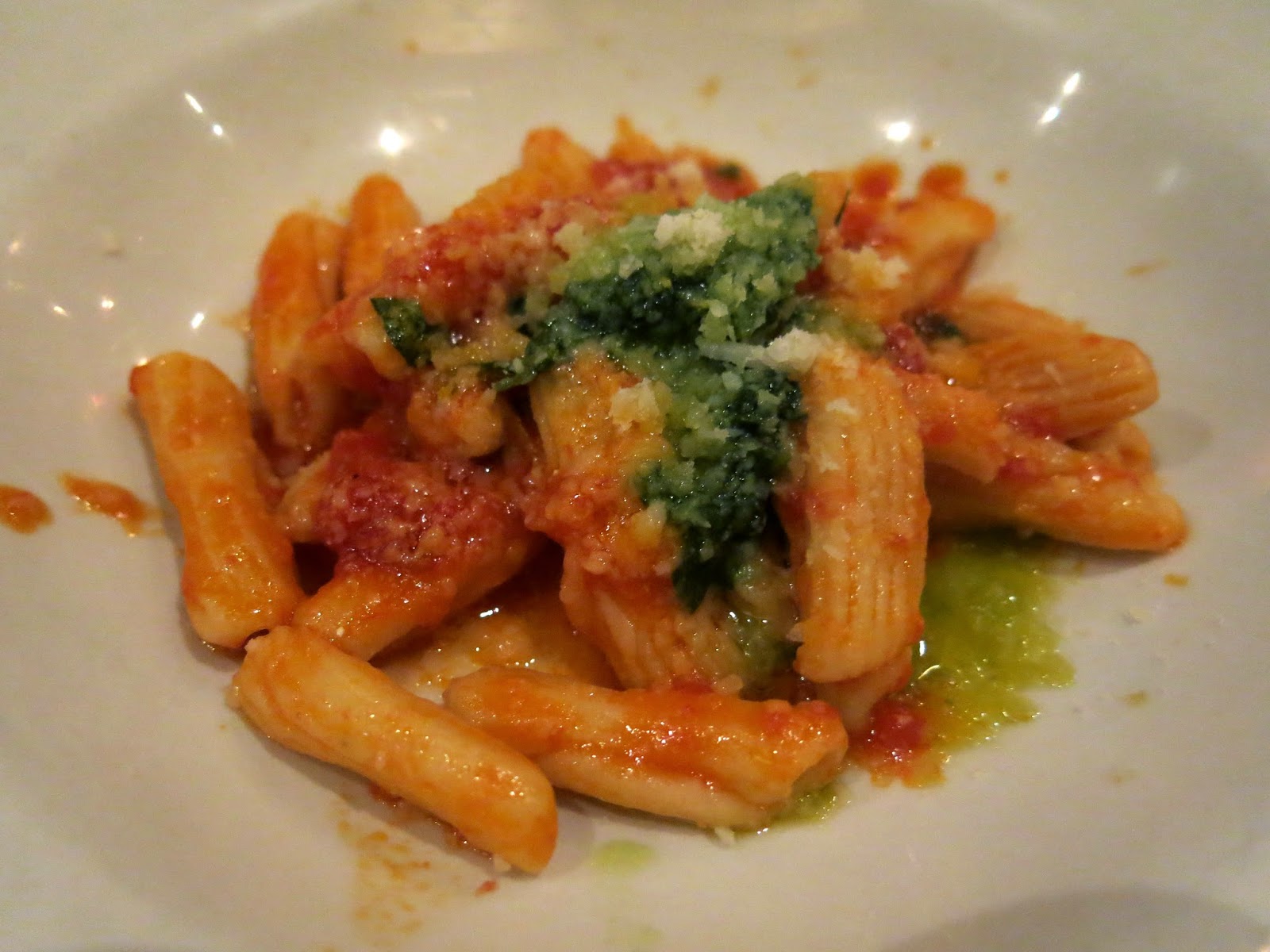 A glass of a crisp white wine was served as the next dishes made their way to the table.  The second course consisted of two beautiful pasta dishes: a Bucatini (which is a sort of hollow spaghetti) with pea shoots, crushed fennel, and pecorino cheese and a Cavatelli (a rolled shell shaped pasta) with tomato, pesto, and Parmesan cheese.  While the cavatelli was a beautiful, clean mix of classic Italian flavors with a perfectly al dente pasta, the favorite amongst the group seemed to be the bucatini, which had an amazingly fresh smell (it reminded Brandy of a grassy hill in spring time) from the pea shoots and fennel, as well as an earthy taste from the perfectly portioned cheese. 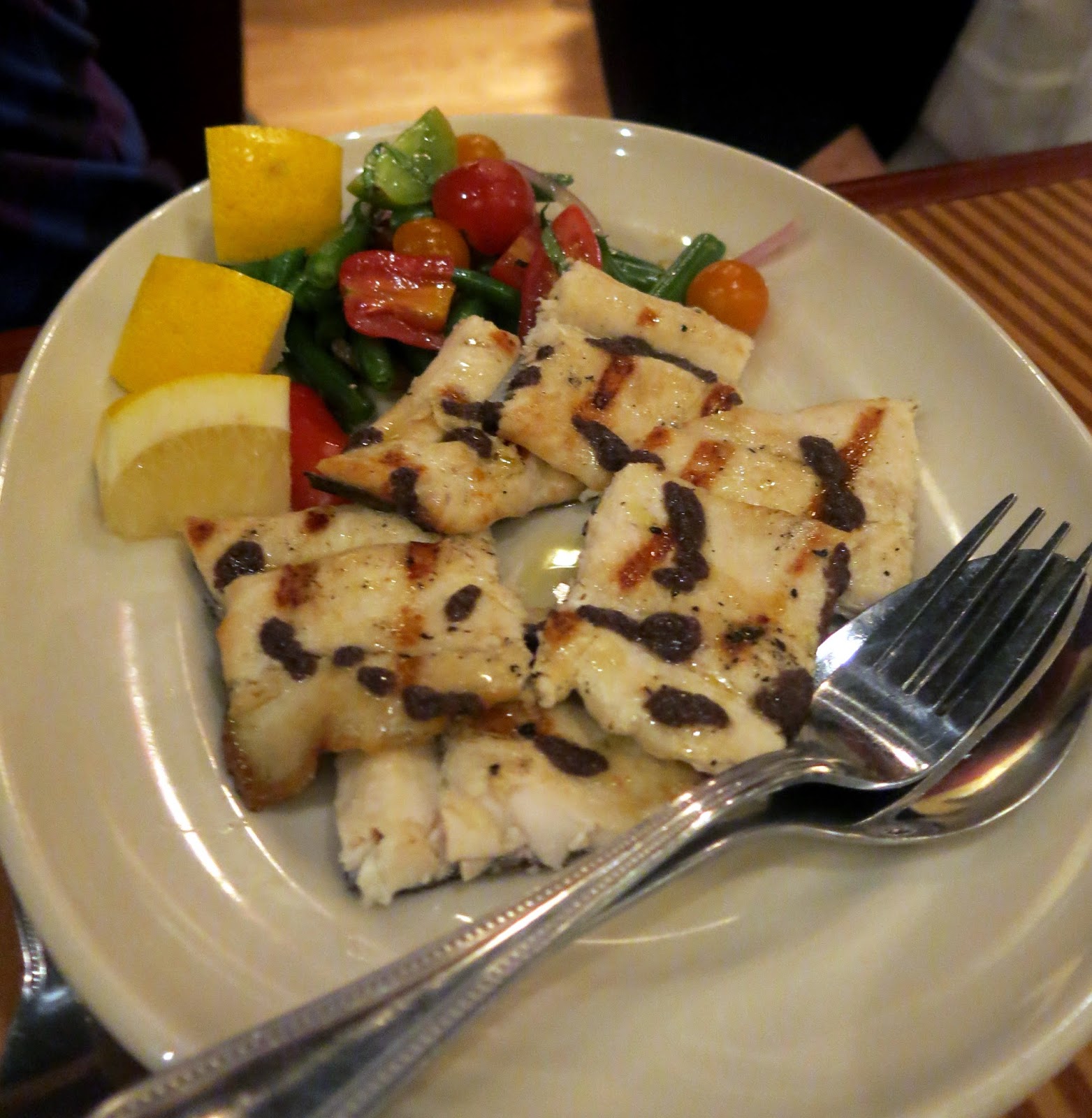 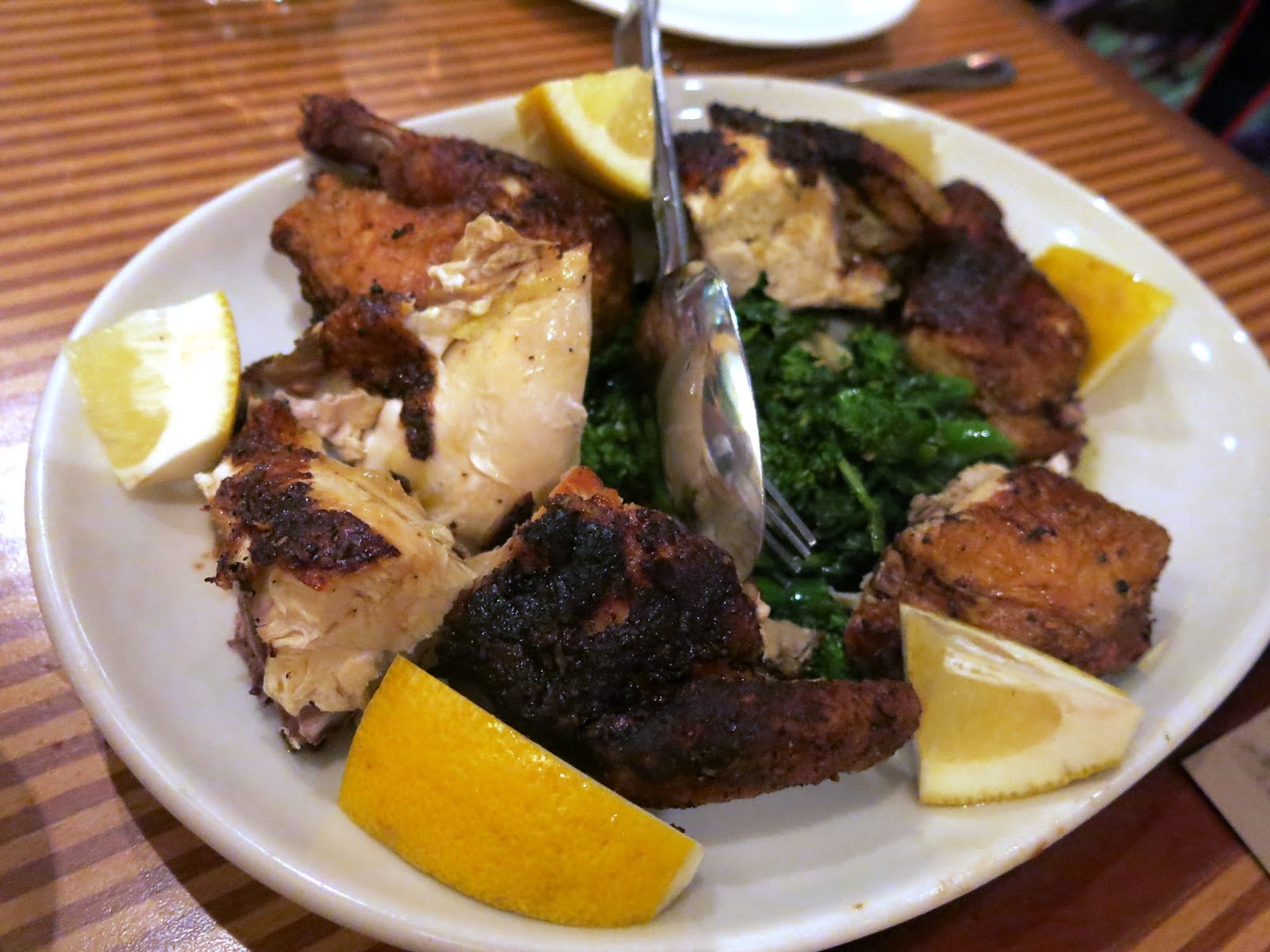 The diners then enjoyed a full bodied red wine as the third course was presented as a parade of entrees: Brick Grilled Cornish Hen, Grilled Trout and Fresh Vegetables, and what was being called a "True" Eggplant Parmesan.  The trout was very tender and flaky with a nice char from the grill, which matched well with the cornucopia of vegetation served along side it.  The Cornish hen had a sort of herbed crispy coated skin and was amazingly moist and succulent on the inside, while still maintaining a soft crunch on the outside.  Brandy's personal favorite was the eggplant parmesan, which to her mind resembled more of a lasagna, but really had a nicely firm eggplant as it's layers, topped with a slightly sweet tomato sauce. 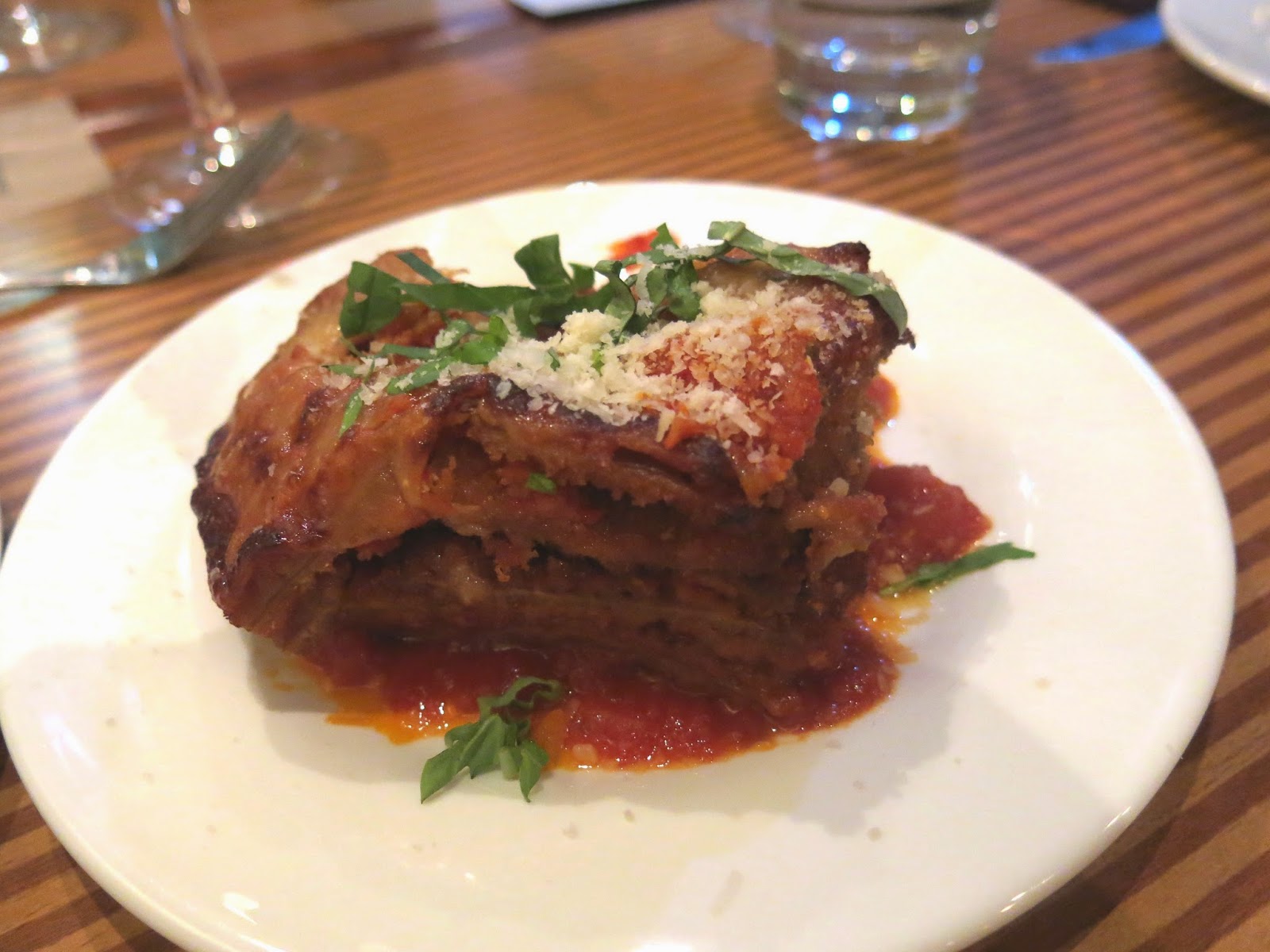 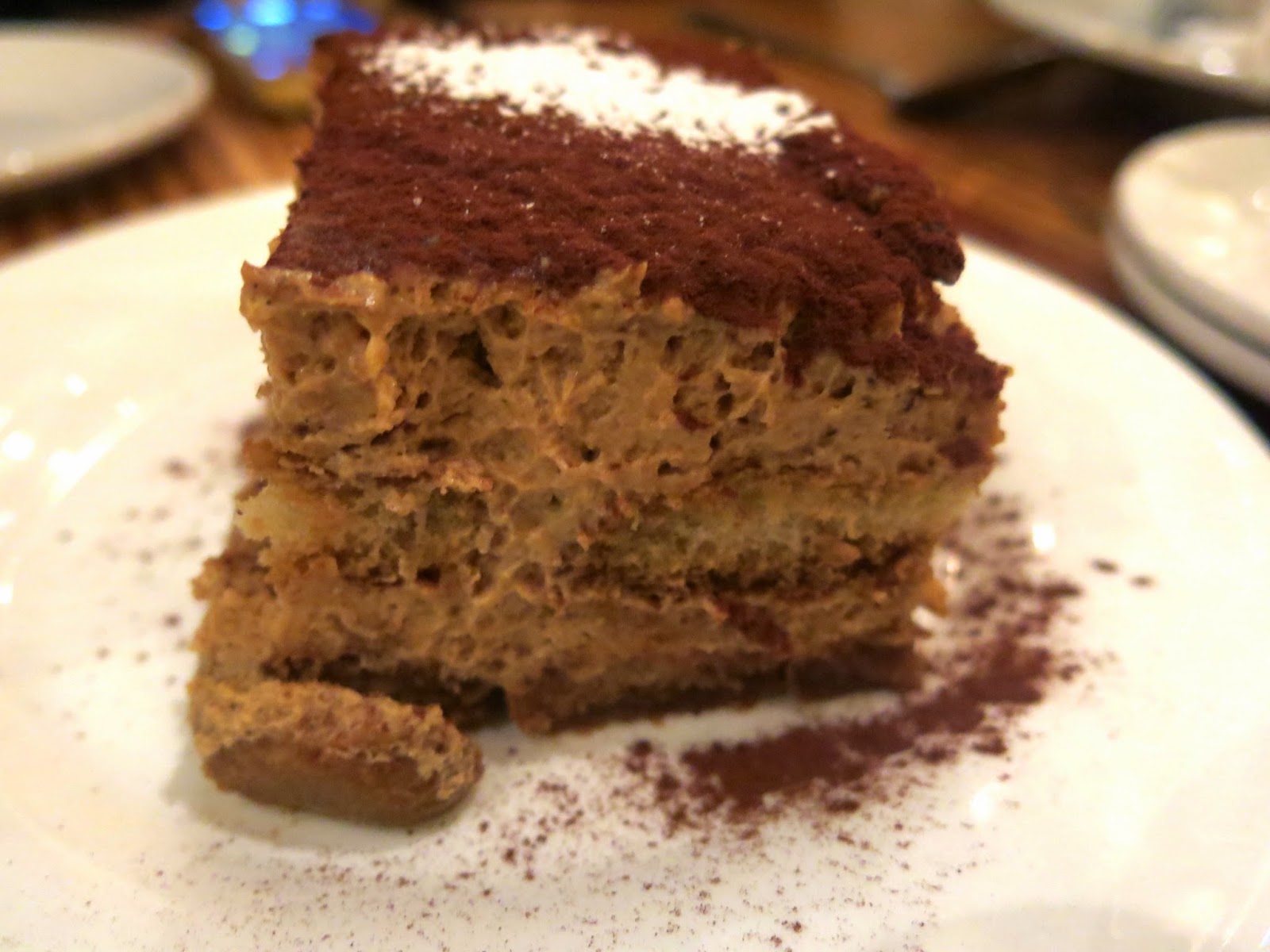 As the group groaned for mercy, the final course was served: dessert.  First there was a lovely, rustic Berry Cobbler, made with strawberries and blueberries and topped with some vanilla whipped cream.  Again, this dish seemed to set the group into lamentations for the end of a beautifully mild summer.  Lastly was what several people at the table descried as the best Tiramisu they'd ever had.  Fluffy, light, yet still rich and full of coffee flavor, the dessert was the perfect end to such an extravagant dinner.

As the group relaxed with coffees and some of the house made Nocino (a potent liquor made with walnuts), Brandy couldn't help but nose around a bit.  This was when she discovered that Azzurra served brunch!  Making a careful note in her book to come back as soon as possible for said brunch, she and the rest of the Chicago Food Bloggers waddled off into the night.

The writers of this blog were invited to dine at Azzurra at no cost in exchange for an honest review.