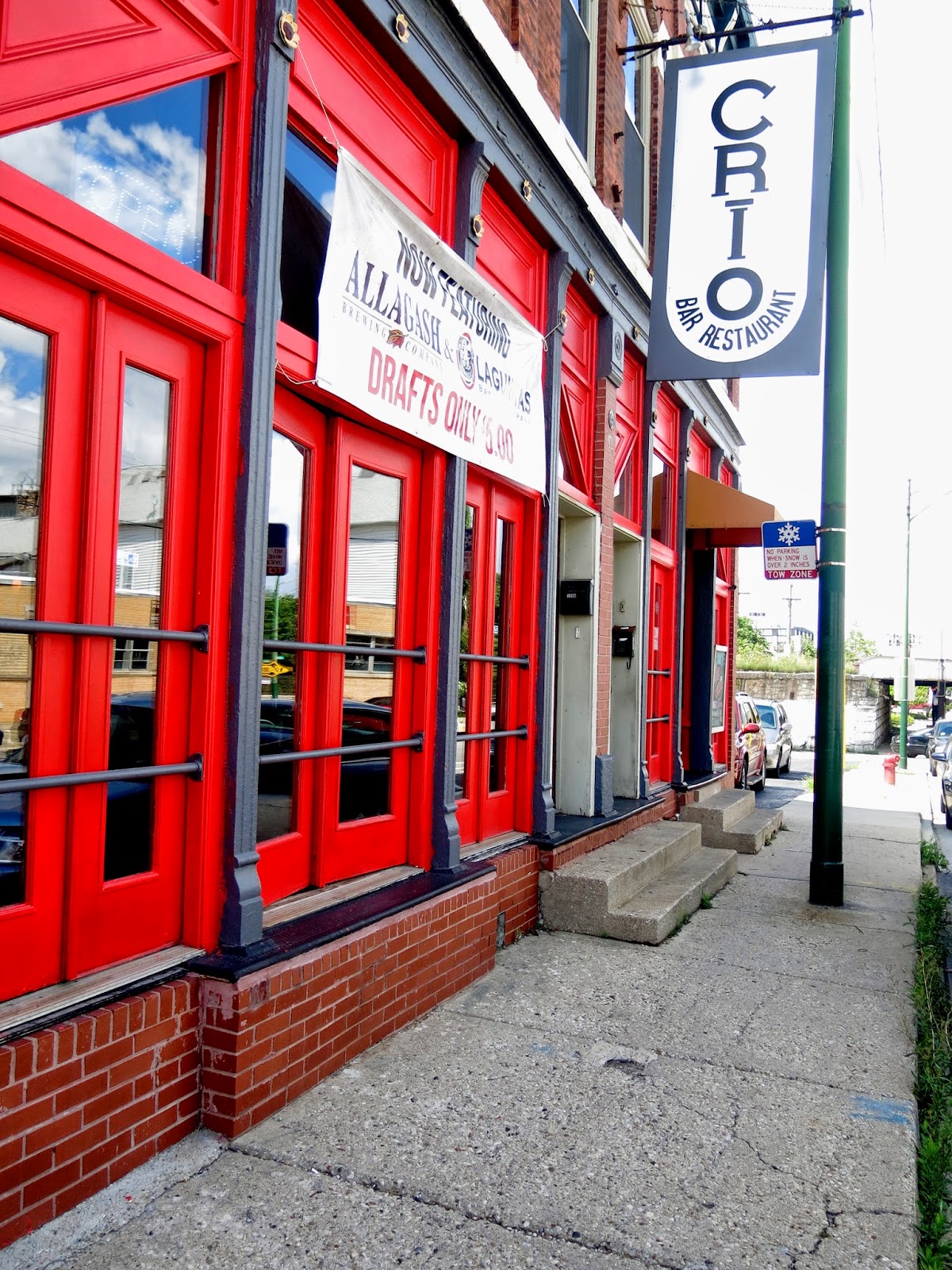 As much as Brandy loves going out for brunch, sometimes it's just plain hard to leave the house.  "What I need is a private chef," Brandy has often contemplated, "I'd like to just wake up to a full gourmet brunch every morning.  Or better yet, be given a choice of brunch foods upon waking so that I can find something that suits my mood.  I wonder if there culinary students out there who would like a position like that..."  But until Brandy finds the right person to take the job, she still will drag her weary bones out the door every weekend morning in search of a brunch to fit her fancy.

Recently while running errands in Lincoln Park, Brandy came across Crio, a Latin inspired gastro pub, on an off the path corner of Clybourn.  Liking the bright red exterior and colorful chalk boards out front, she decided to head inside for a little mid morning refresher. 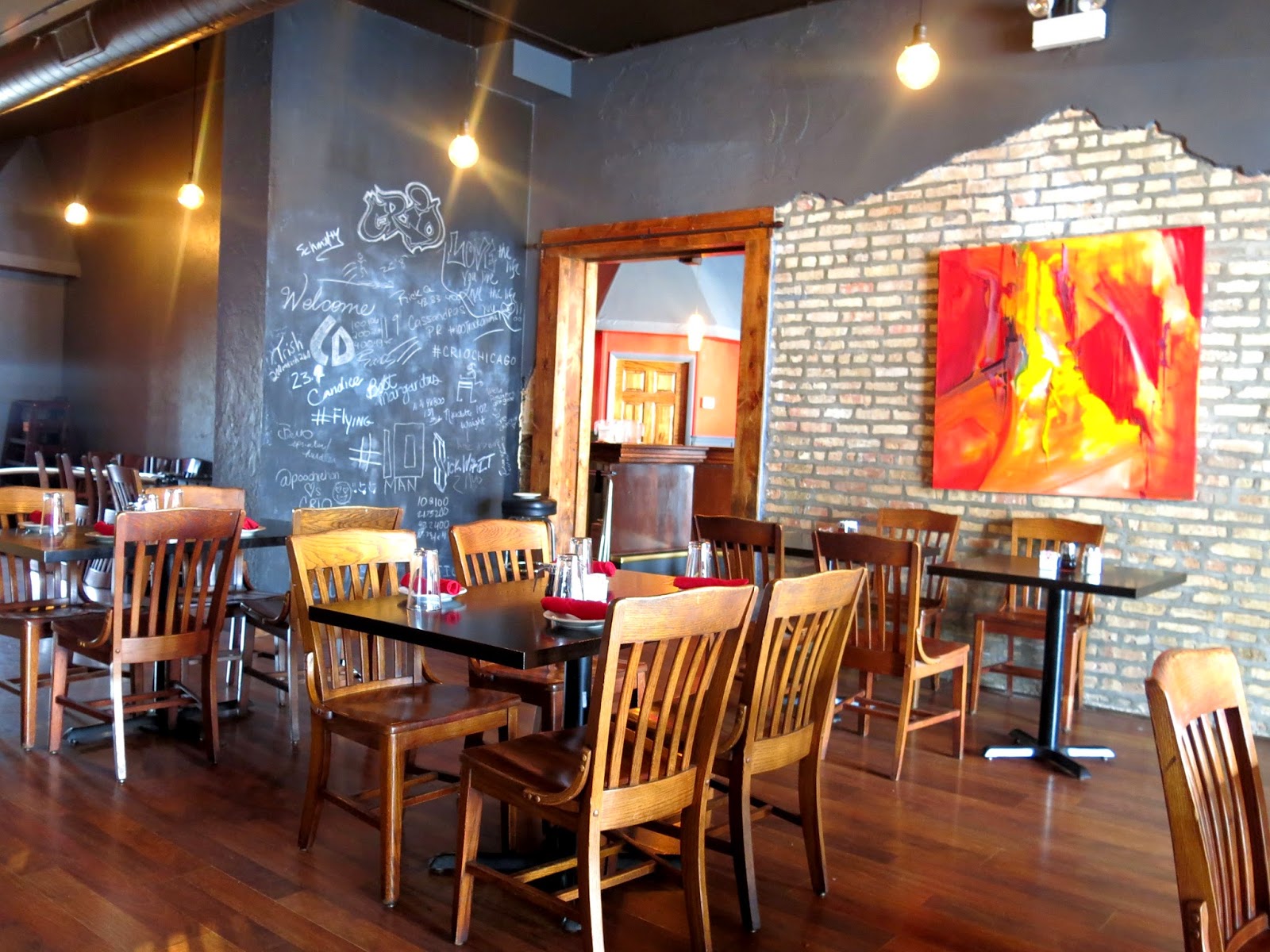 Crio's interior was definitely a little darker than is usual for a brunch spot, but Brandy couldn't help thinking what fabulous atmosphere the place must have had at night.  "I wouldn't mind sitting across from some young chappy under lowered lights in this place, let me tell you!" Brandy mumbled to herself.  The walls were partly exposed grey brick and partly darkly painted backgrounds with bright, intense murals and paintings, and although the large windows at the front of the dining room let in some sun, Brandy found she liked the fact that the light didn't brighten up the cavernous space too much in an unnatural sort of way.

She started off right away with a Bottomless Mimosa, which certainly did prove to be bottomless as one of the extremely kind and personable managers kept delivering a new glass every time she was halfway finished with her current one.  The drink itself wasn't particularly special as mimosas go, but had a nice brightness to it without being too sweet. 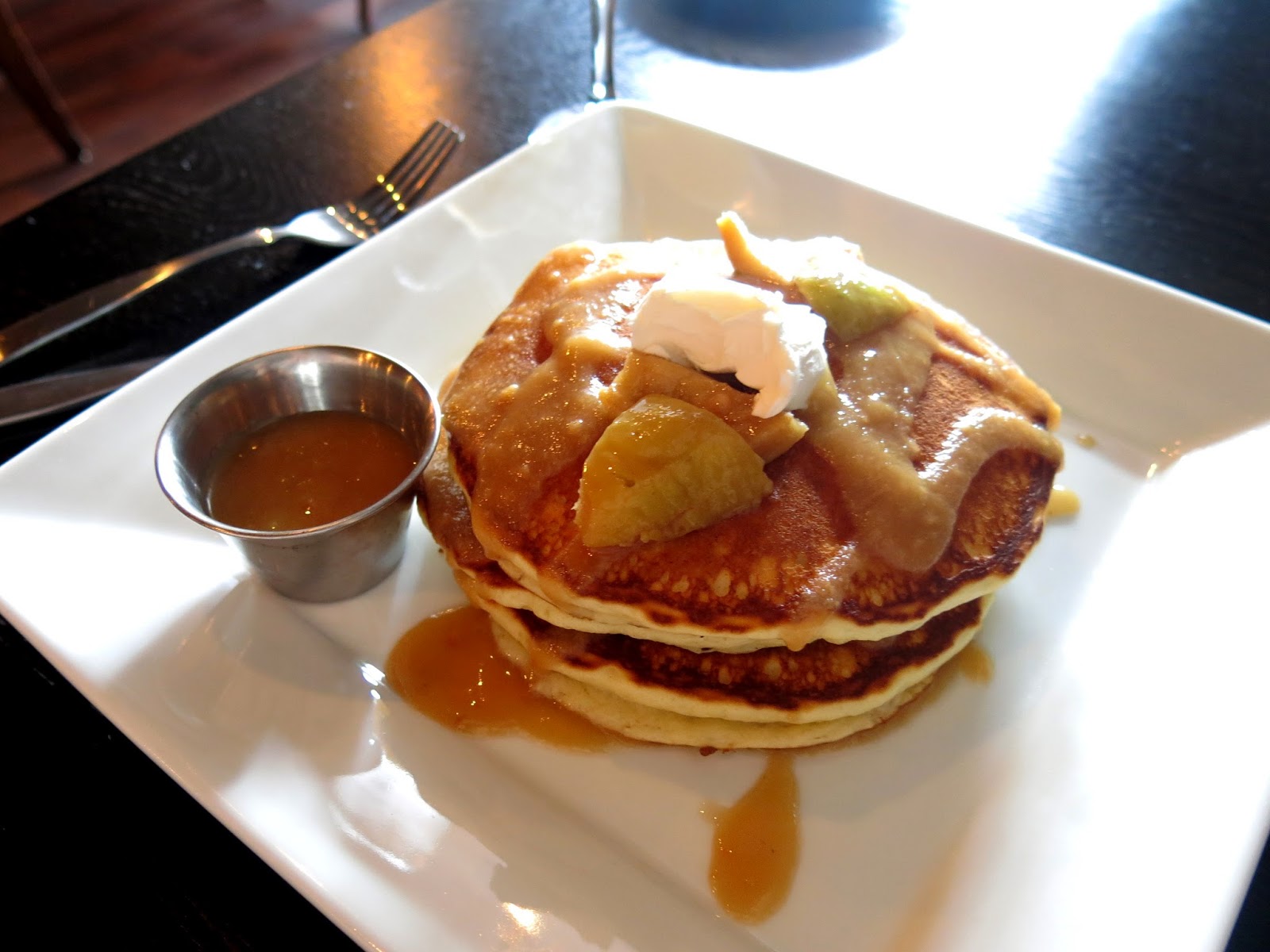 For her sweet course, Brandy chose the Guava Pancakes, simply because she'd never seen such a concoction on any menu before.  "Banana?  Sure.  Chocolate chip?  Of course.  Blueberry? Naturally.  But Guava?  Now there's something original!" as Brandy put it.  After the first bite, she found she was utterly in love with these pancakes; their texture was impossibly light and the guava syrup they were topped with packed plenty of fruity deliciousness to each mouthful.  Brandy even detected notes of coconut and cinnamon, but above all was the absolutely delightful tropical flavor of the fresh guava slices on top.  The kicker to everything was that the pancakes came topped with a scoop of marscapone cheese in place of butter, a touch that had Brandy positively swooning.  Just as she was starting to worry that she would run out of the delicious syrup on the side, a second full cup was delivered to her table before she'd even had a chance to lift her head to look for someone. 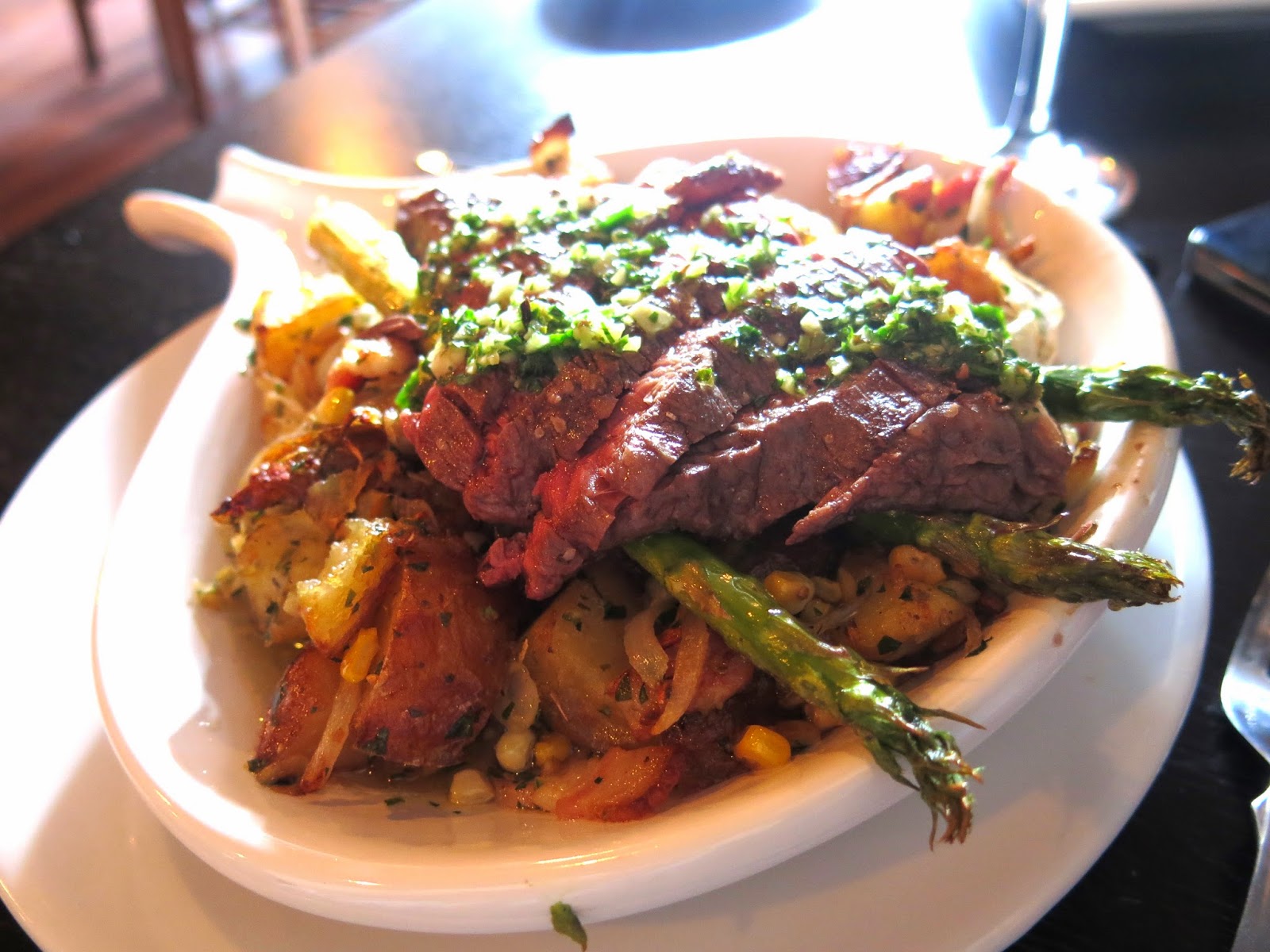 The savory dish of the day was the Steak Skillet, which consisted of roasted corn, asparagus, potatoes, bacon, and slices of flank steak cooked to order.  Everything in the skillet had the perfect texture, from the silky potatoes to the crisp corn kernels, the tender steak, and the succulent asparagus.  The flavors were all very vibrant, yet distinctive, and everything had a nice garlicky punch to it.  Brandy very much appreciated that there was no attempt to incorporate eggs into the skillet, as a lot of other restaurants would have tried to do in order to make it more "breakfasty."  "Don't get me wrong, I love a good egg where it's appropriate," Brandy said, "But what some places don't understand about brunch is an egg isn't always necessary.  In this case, It would have been superfluous, as the dish is so rich already, so I'm happy there's none to be found."  The only downside to the skillet was the rather large puddle of oil at the bottom of the dish, which did require some maneuvering around to scoop up forkfuls of the corn and bacon without bringing along a lot of grease, yet somehow, Brandy still managed to get almost every morsel into her mouth.  "I like people like you who clean their plates!" The kindly man who had been seeing to Brandy proclaimed as he removed the dish from the table, which instantly endeared him to her forever. 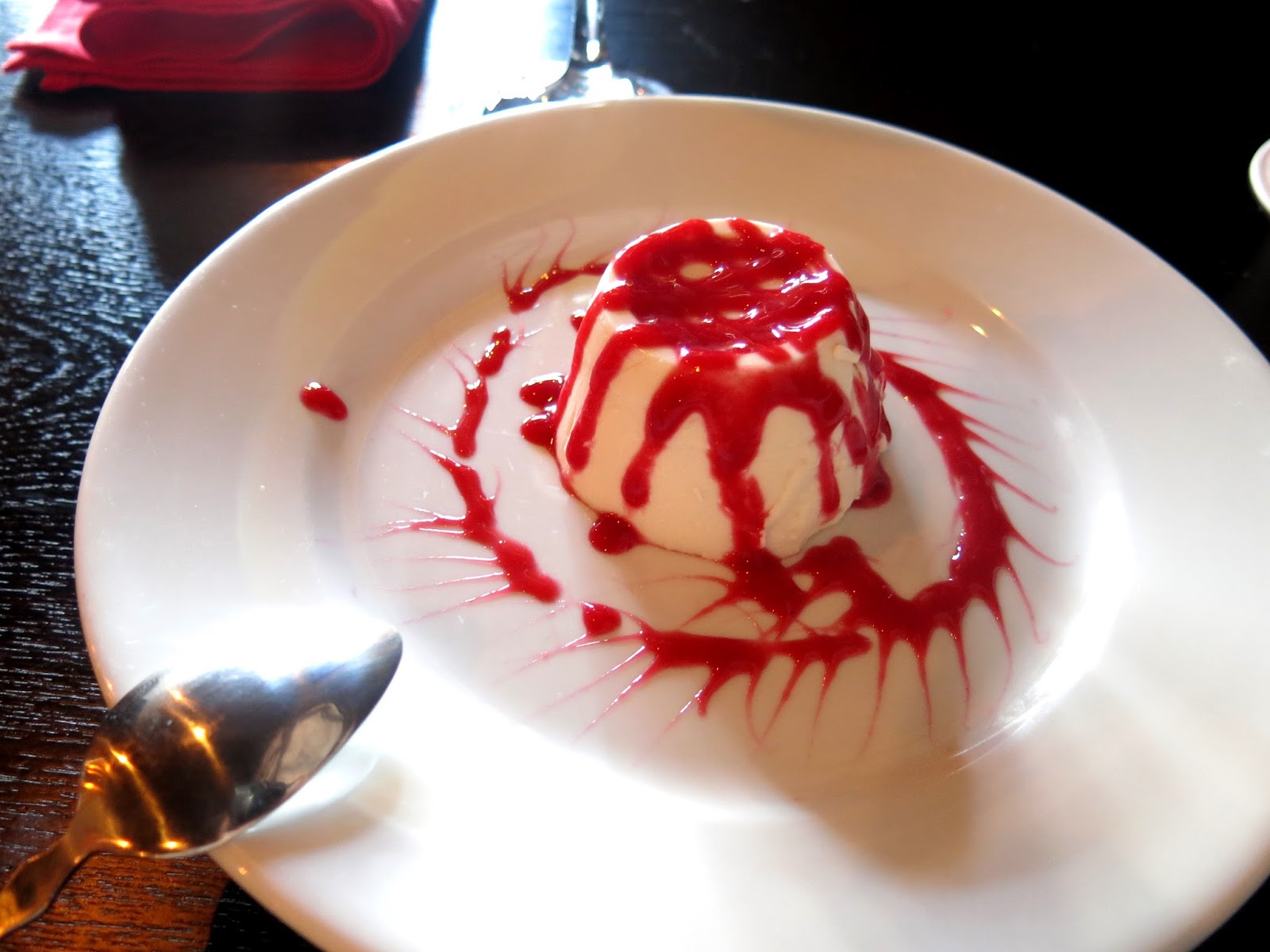 As a special treat, the restaurant actually sent a dessert to Brandy's table without her even ordering it!  The stunningly beautiful plate presented to her was described as "a pudding made with heavy cream and sour cream" topped with a strawberry coulee.  Though incredibly full from stuffing both entrees down her gullet already, Brandy could hardly turn down such a generous gift, so bravely she soldiered on.  The pudding tasted like the child of a cheesecake and a flan; a firm, creamy texture with just a little bit of tang to it, and the bright, acidic strawberry sauce provided an excellent counter balance.

Coming back around to check on her, the kindly man asked if Brandy lived near by.  "No, dear.  Just happened to be in the neighborhood and decided to pop in," Brandy smiled through the haze of at least four mimosas.  "Well, you know where your new home is now," he smiled at her, and Brandy smiled back at him.  True, the food at Crio was absolutely outstanding and the atmosphere quite aesthetically pleasing, but the thing that really topped the bill for Brandy was the service.  Every single thing during that brunch was done instinctively and with a genuineness that is very difficult to find even in the most high end restaurants.  "You better stop re-filling those mimosas," Brandy kidded with the man as he delivered yet another glass, "Or you'll never get rid of me!  I'm serious, is there somewhere I can take a nap?" 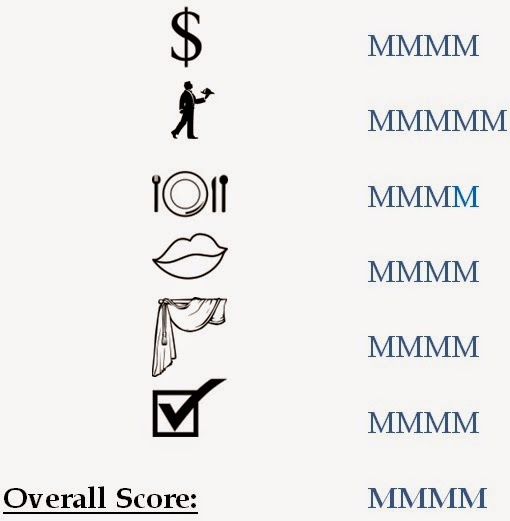