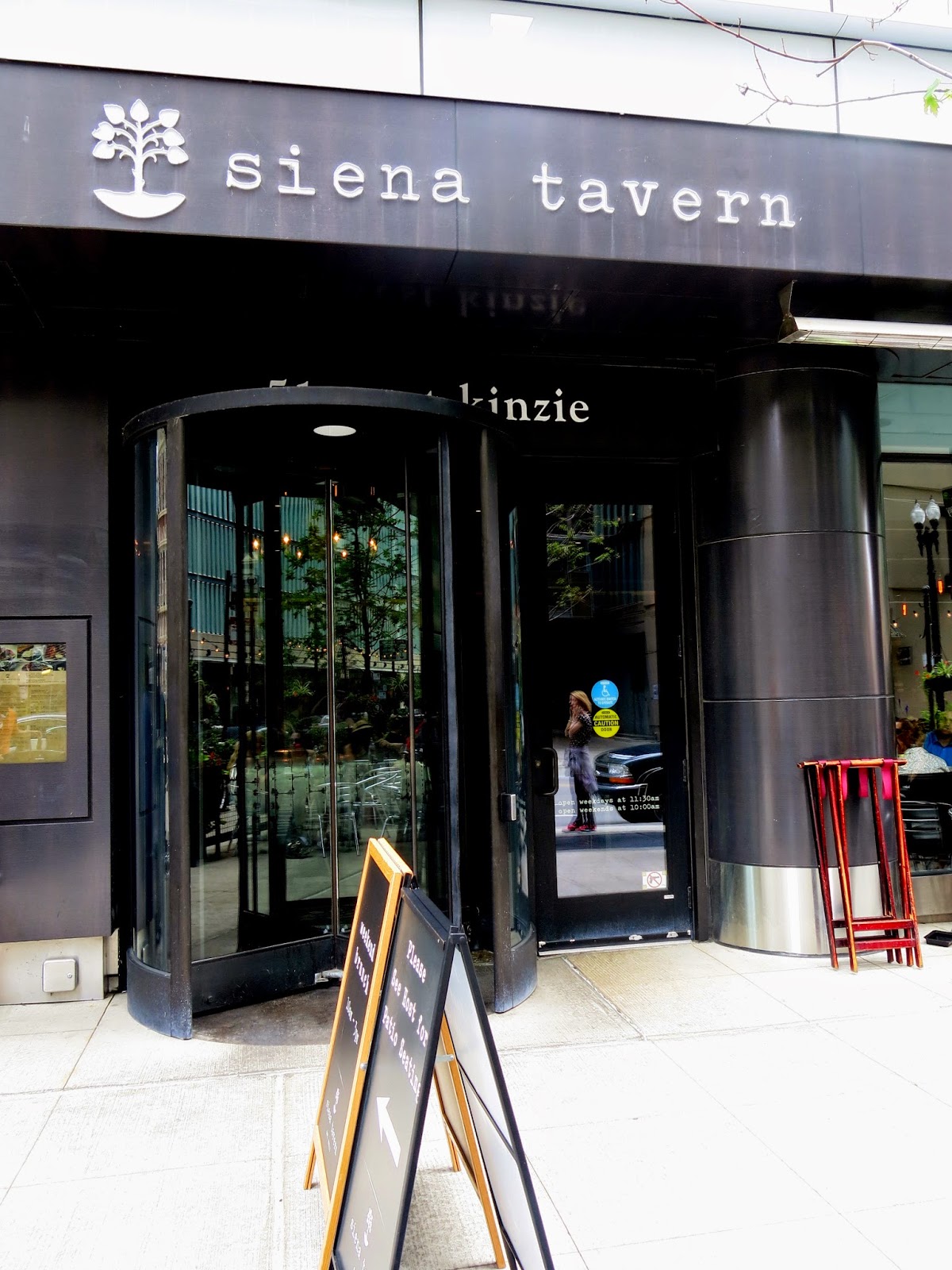 One of the things Brandy likes best about brunch is that, given the right circumstances, it can be just as good whether it's had at a cheap greasy spoon or at the finest and most expensive hotel.  "I've paid $5 for brilliant plates and upwards of $25 for some absolute dreck," Brandy will explain, "Price is not necessarily an indication of  how good your meal will be.  In my experience, often times it's just an indication of the chef's ego." 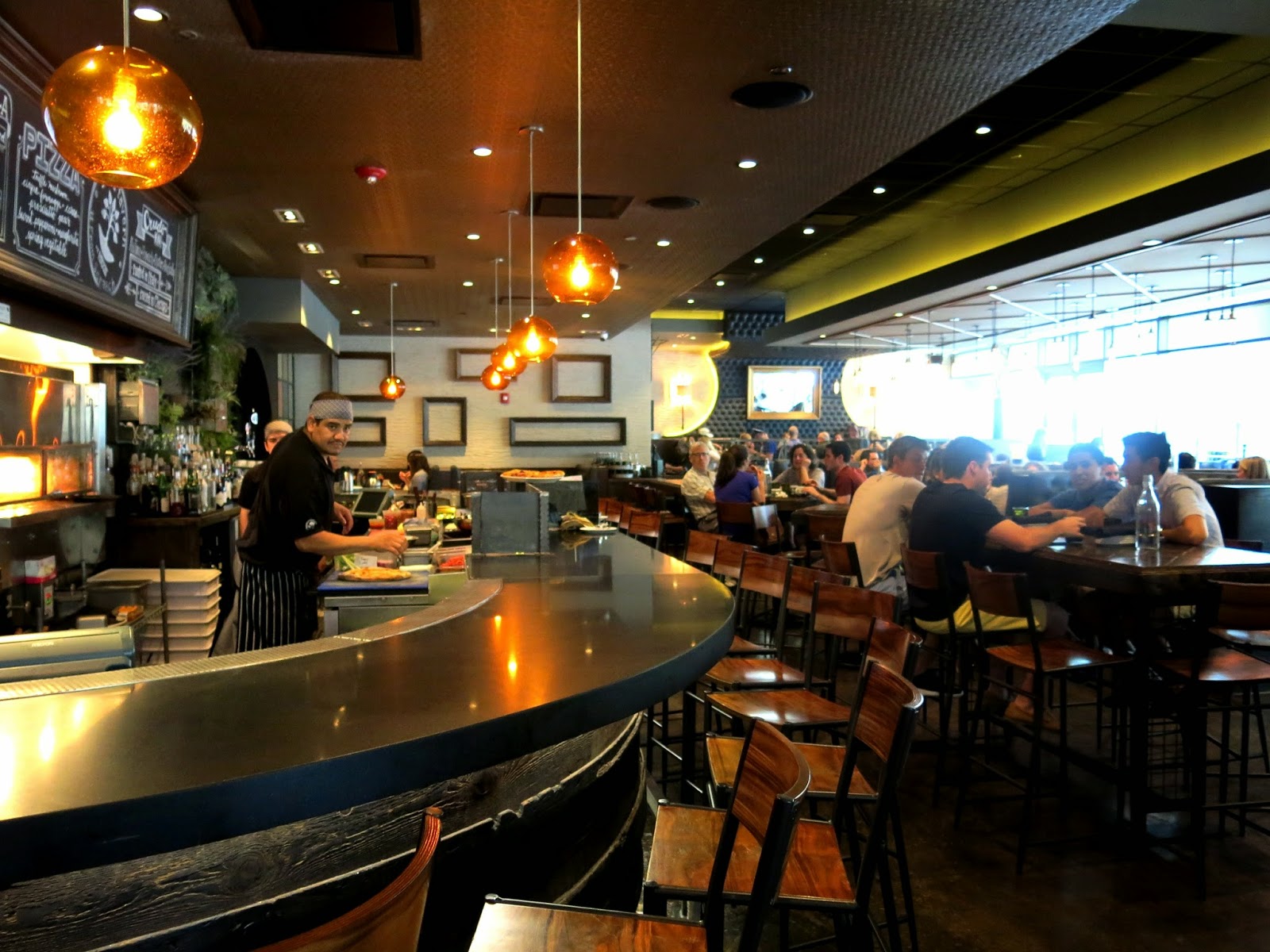 Brandy decided to prove this point to her dear friend Bailey Blue by taking her along to Siena Tavern in River North for brunch.  Siena Tavern is one of several current ventures in Chicago headed by Top Chef alum Fabio Viviani, this one focusing on rustic Italian fare with a twist of urban Chicago sass.  Opened in the spring of 2013, Siena Tavern has been steadily growing a huge fan base with lighter plates like wood fired flatbread pizzas and home made gelato along side more elaborate entrees and house made pastas, making this place not only perfect for a fancy meal, but also more casual night out.  "They've got everything there for all different budgets," Brandy told Bailey, "So let's put my theory about price versus value to the test."

The inside of Siena Tavern was bright and inviting with its warm woods and gold tones, making the place feel luxurious, but comfortable.  The dining area was open and airy with plenty of space to move around.  At the east side of the restaurant was a gorgeous, sparkling bar area, while against the south wall a couple of chefs prepared fresh plates in full view of the diners, their backs to a beautiful wood fire oven. 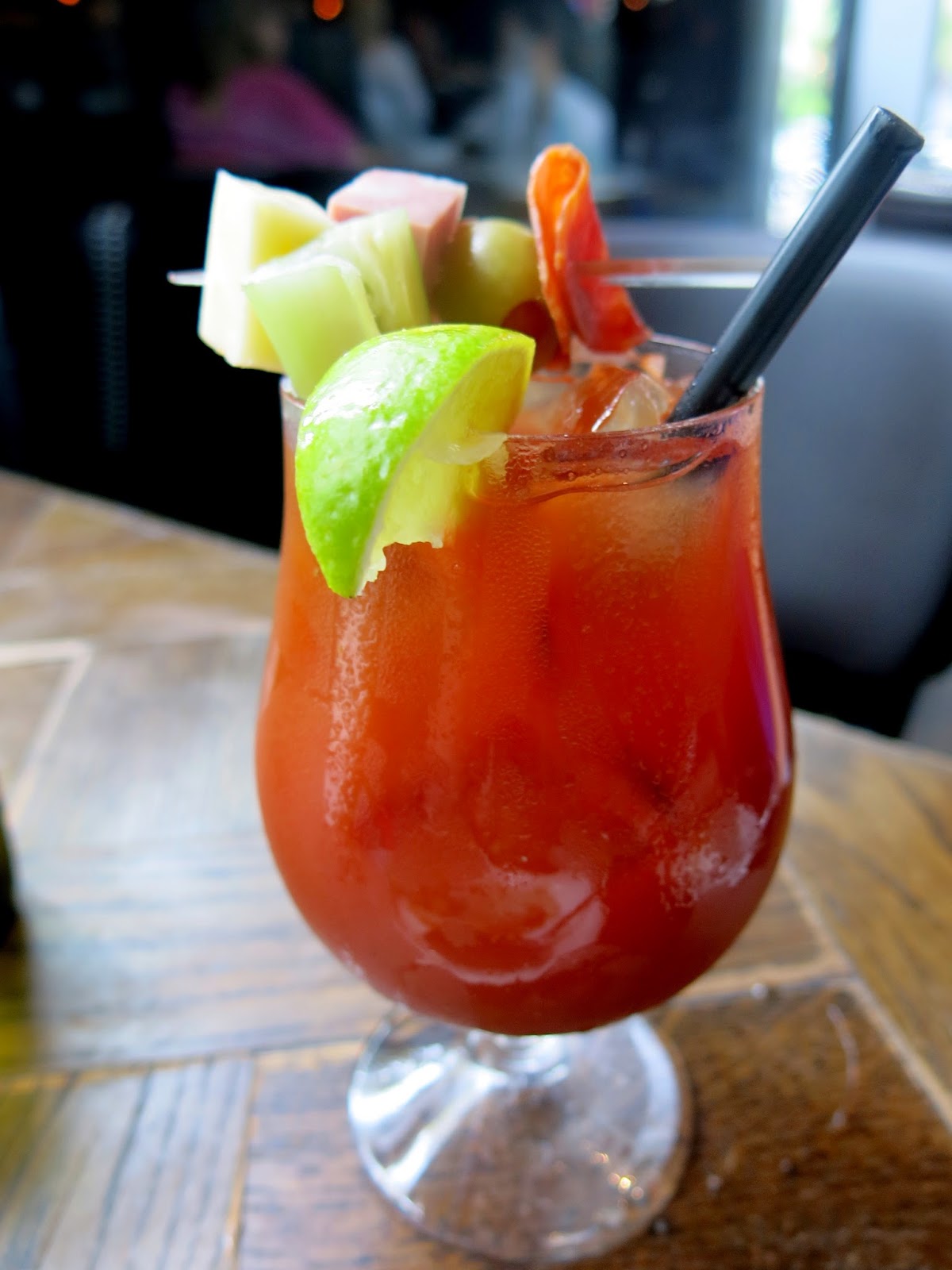 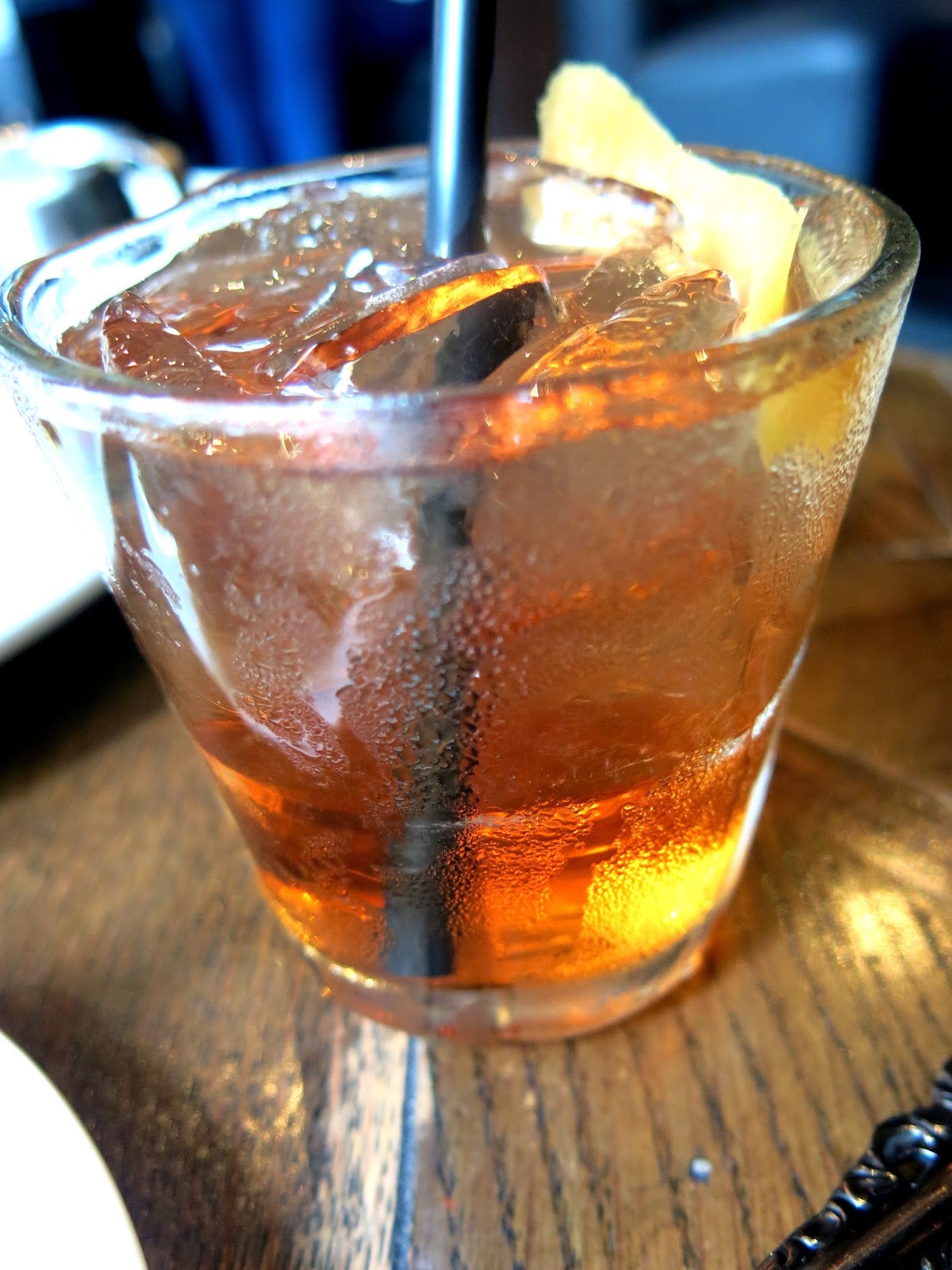 Brandy and Bailey started right off with a couple of drinks.  Bailey opted for her usual Bloody Mary, which came nicely dressed with plenty of top quality meats, cheeses, and pickled veggies on a skewer.  Bailey thought the Bloody was just spicy enough without being too overwhelming and that it had a nice freshness to go along with a thinner consistency and some nice peppery bite.  "The Bloody Mary is a pretty crazy thing when you think about it," Bailey mused, "Take out the alcohol and it would practically be a health drink!"  Brandy went for one of the signature cocktails, labeled simply the No. 10 (all the signature cocktails at Siena Tavern had numbers instead of names), which was a bit of a play on an Old Fashioned with a touch of apricot.  Brandy liked that the drink was strong, but not too abrasive, and had a nice little bit of sweetness to it. 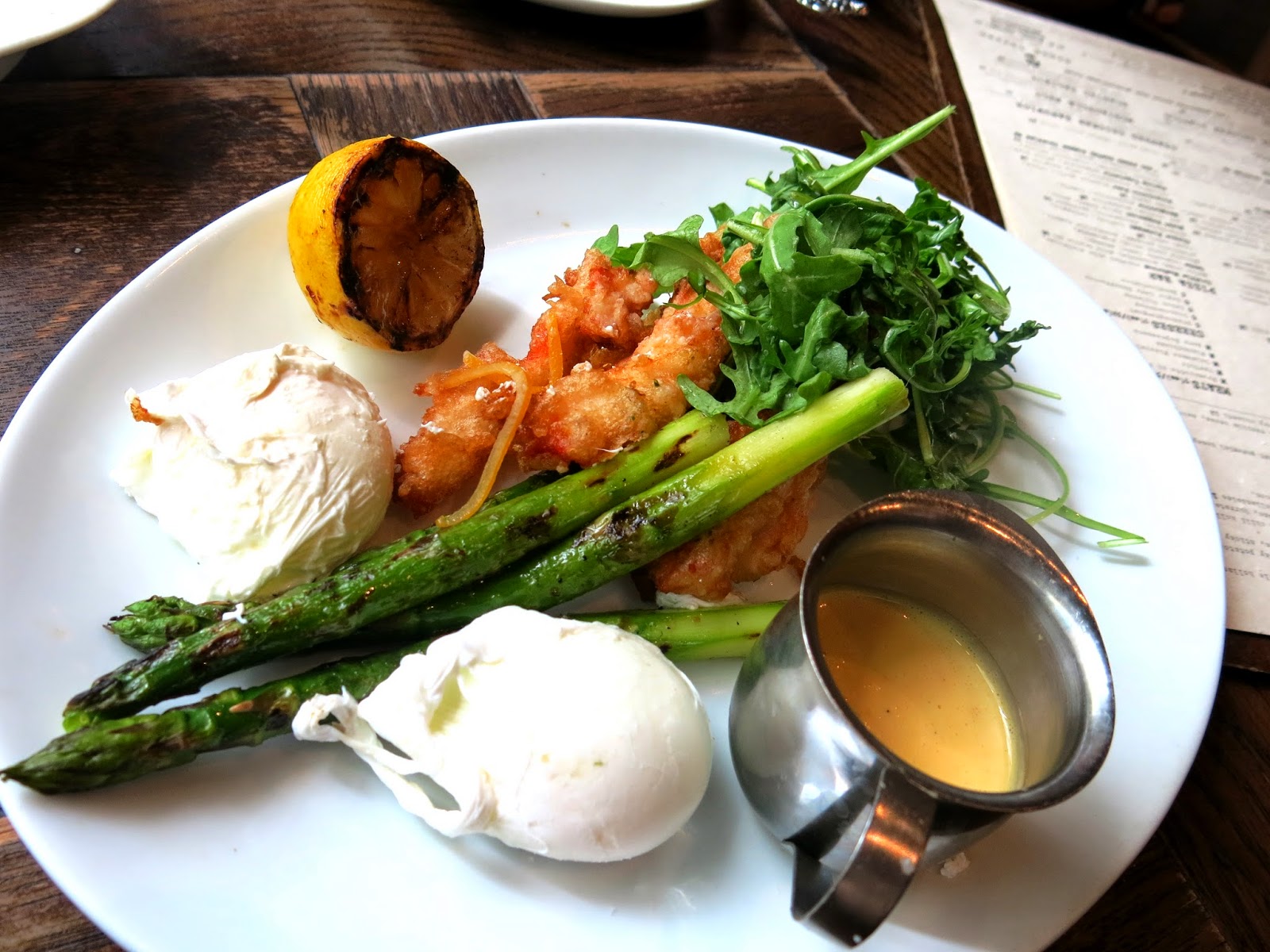 They decided to started off their meal with an intriguing dish labeled Egg in a Jar.  "I'm pretty used to what a brunch menu looks like at this point," Brandy said, "Benedict, pancakes, French Toast, burger, skillet, etc.  But this... I just have no frame of reference for this.  I simply must experience it."  What came to the table was a large glass mason jar on it's side, containing a host of fresh, beautiful looking components.  The server, with a sly smile on his face, placed a plate on the table and with the deft skill of a magician, slid the contents of the jar onto the plate in a breath taking arrangement.  There were roasted spears of asparagus, several chunks of tempura crab, two perfectly poached eggs, some arugula, a roasted lemon, and a side of hollandaise sauce in a silver gravy boat.  Indeed, the presentation was so beautiful and original that Brandy sat starring at it, stunned, until Bailey reached across the table and squeezed the roasted lemon over the lot.  "What?" she asked, spearing some crab with her fork, "I'm starving."  Everything was fresh and succulent with a great mix of textures from the crunchy crab to the velvety eggs, all complimented by the peppery greens and bright citrus of the hollandaise. 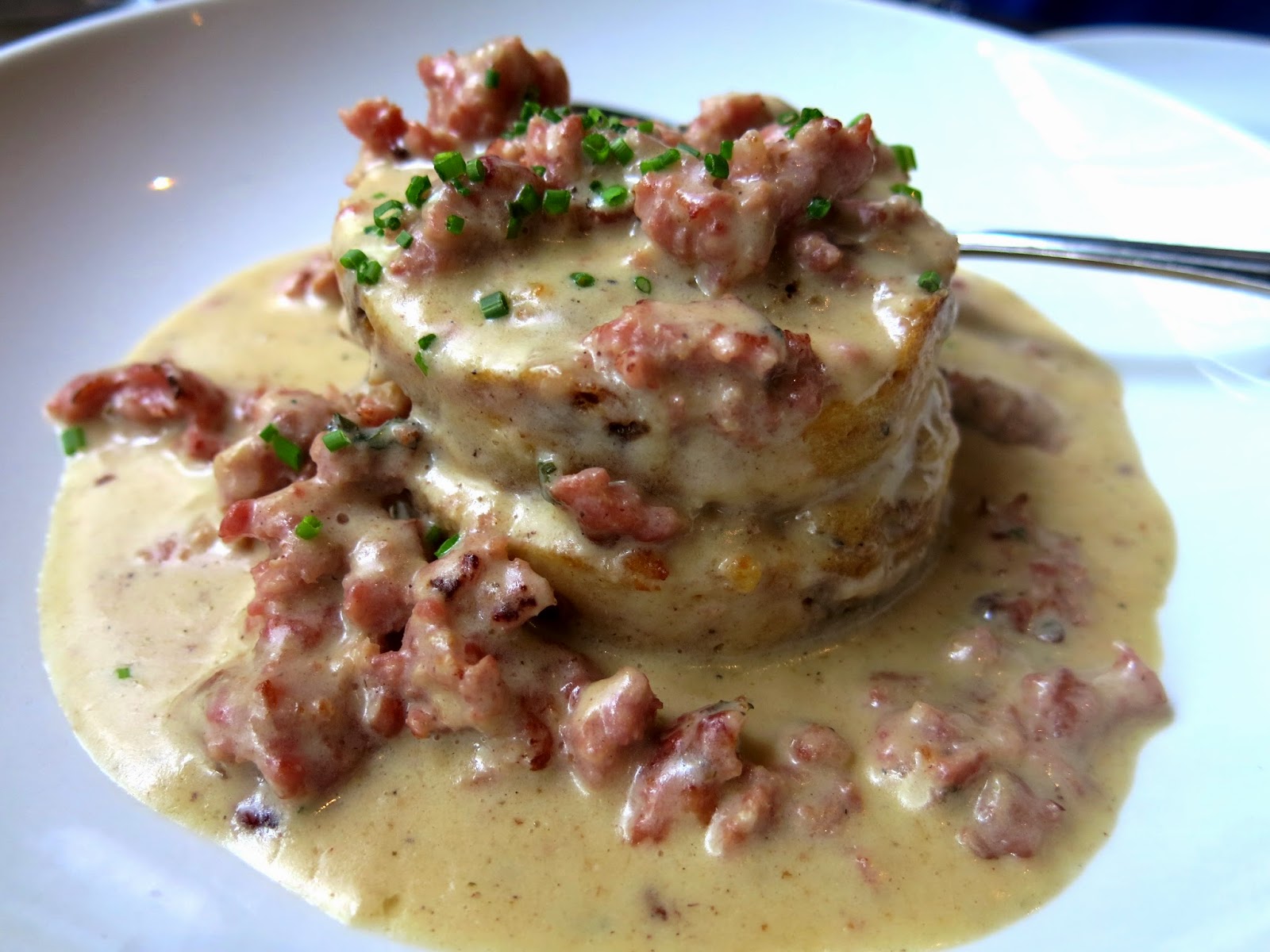 Next, they sampled the Biscuits and Gravy.  This was no average biscuits and gravy, but rather two perfect rounds of smoked brioche bread pudding slathered in a prosciutto and mushroom gravy with a little bit of truffle oil.  Once again, the plating of the dish simply dazzled Brandy.  "It's extremely hard to make biscuits and gravy look pretty," Brandy remarked, "But look at this thing!  It's a bloody masterpiece!"  The dense rounds of bread pudding had an almost cheesy flavor with a slight hint of aromatic sweetness, working surprisingly well with the savory gravy, which was loaded with chunks of tender, melt in your mouth pork sausage. 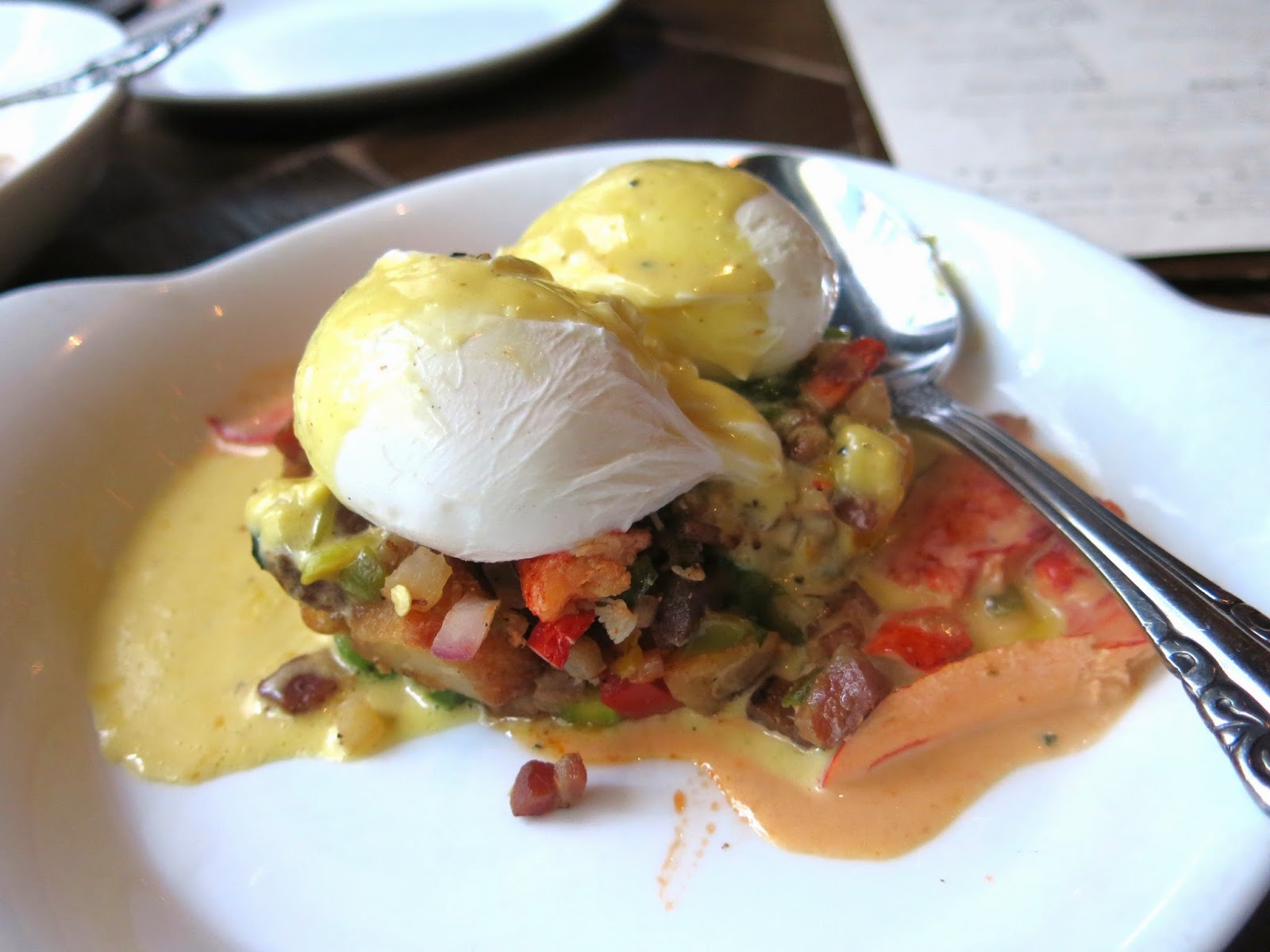 Next up was the Lobster Hash, a play on a Benedict with a bed of sauteed veggies and potatoes topped with two perfectly poached eggs, a rich truffle hollandaise and chunks of succulent lobster.  "This might be the most decedent Benedict I've ever seen," Brandy said in awe.  The lobster was heavenly; tender, light, and with a texture like butter, it simply had to touch the tongue before it started to disintegrate into a mouthful of buttery goodness.  The veggies in the hash had a great texture to them, and the potatoes perfumed the palate with a soft smokiness.  The truffle hollandaise was just as rich and indulgent as one might hope, proving to be the ultimate gilding on this beautiful little lily of a dish. 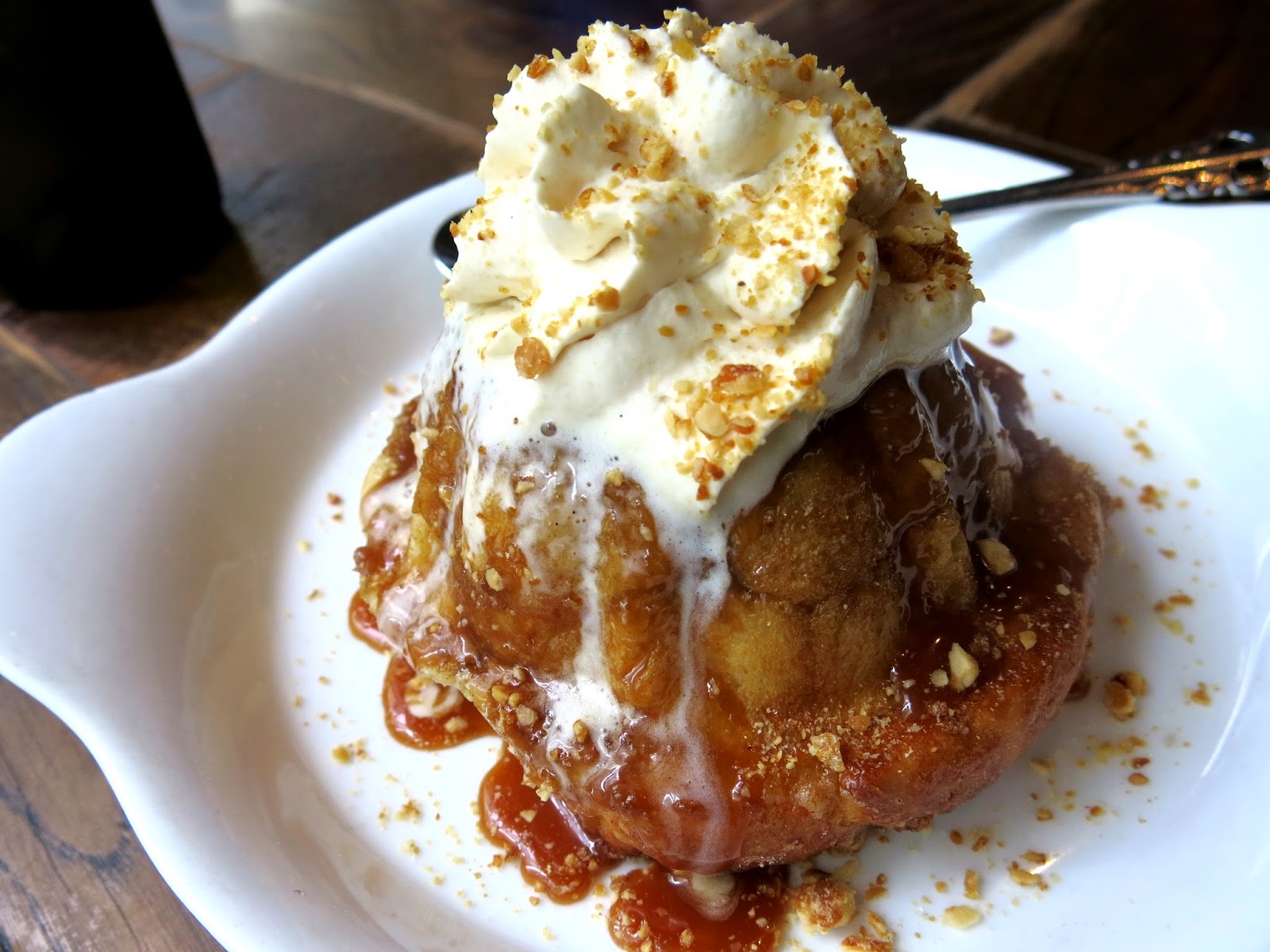 Lastly for dessert, Brandy and Bailey shared the Monkey Bread, which came doused in caramel sauce and topped with candied hazelnuts and a generous helping of whipped cream.  Upon the first bite, both ladies leaned back in their chairs as their chewing slowed, allowing them to savor the delicious bite of food for as long as possible.  The caramel flavor was present, but not obnoxiously sweet, and the hazelnuts provided a nice little crunch to go along with the chewy sticky bun like bread.  "This might be one of those rare cases," Brandy said after a moment, "Where I think the pure sight of this dish will speak for itself."

Brandy and Bailey could not have been more pleased with their brunch at Siena Tavern.  From the impeccable service to the warm and friendly atmosphere, this was a restaurant that understood not only the importance of the best ingredients, but how to present them in the most beautiful, unpretentious, and appetizing way possible.  "Are some of the prices a little higher than your average brunch?  Perhaps," Brandy said, "But in the case of something like a lobster hash with truffle hollandaise, you are certainly getting what you pay for.  No more, no less, and as long as the price matches the value of the dish, I don't mind a larger bill.  But I would venture to say that, all things considered, I'd happily pay almost anything to experience that meal again."  Bailey, who was struggling to shove the last bite of Monkey Bread into her mouth, simply nodded in agreement.

The writers of this blog were invited to dine at this restaurant at no charge in exchange for an honest review. 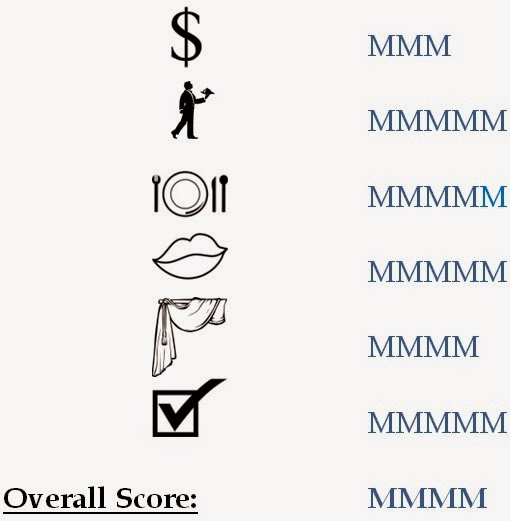