River Roast or Smoke House on the Water 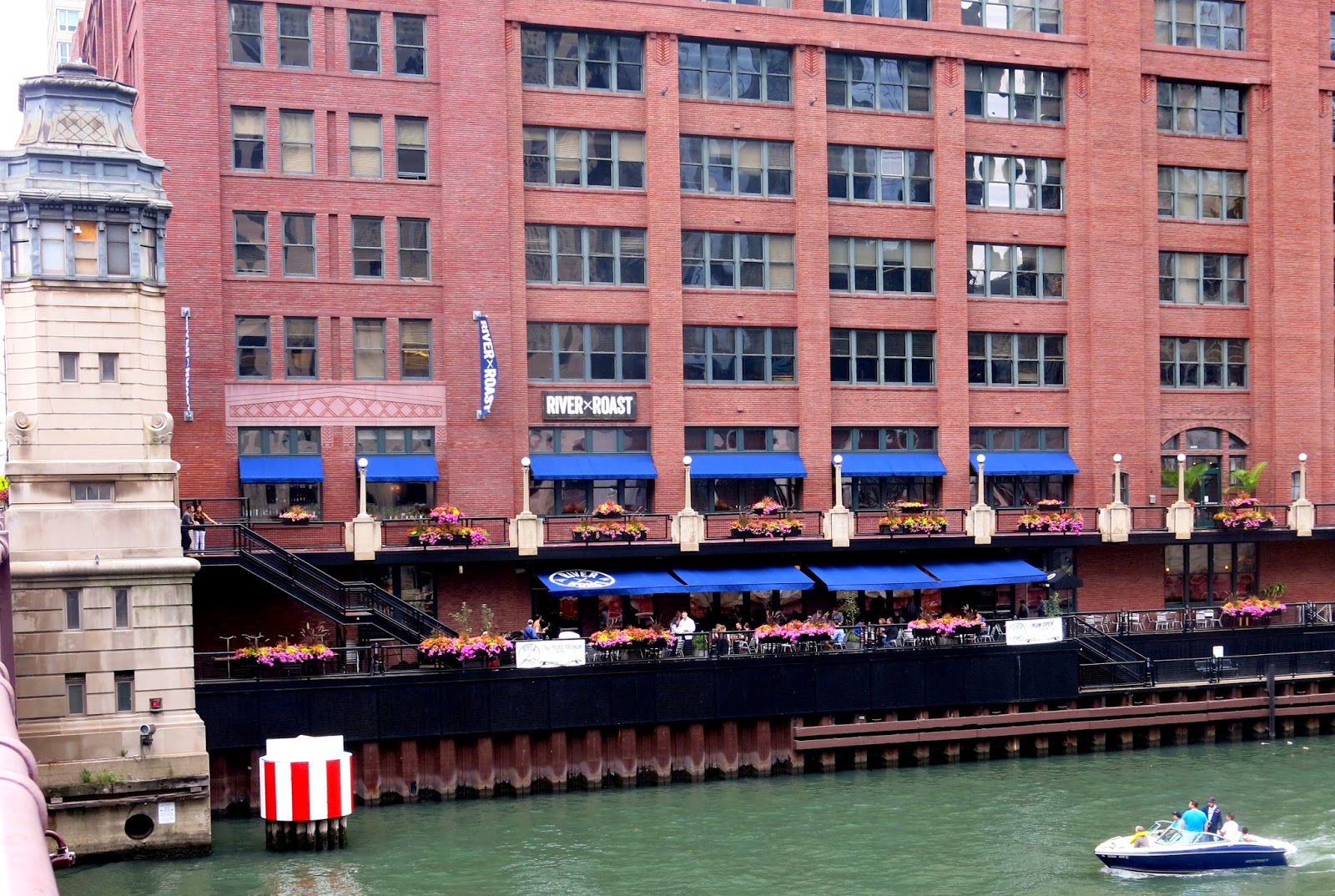 Being a brunch expert certainly has its perks on occasion.  For instance, that kind of clout can often score one invitations to some of the most exciting and delicious events around town, but what Brandy really loves is when she gets to sample a brand new menu at a recently launched brunch service.  "It makes me feel like I'm a spy, in a way," Brandy slyly grins, "I get to go into a new situation and gather information covertly, then make a report about it to the masses.  In a way, I'm a bit of a hero.  I save the brunch going public from wasting their time and money!" 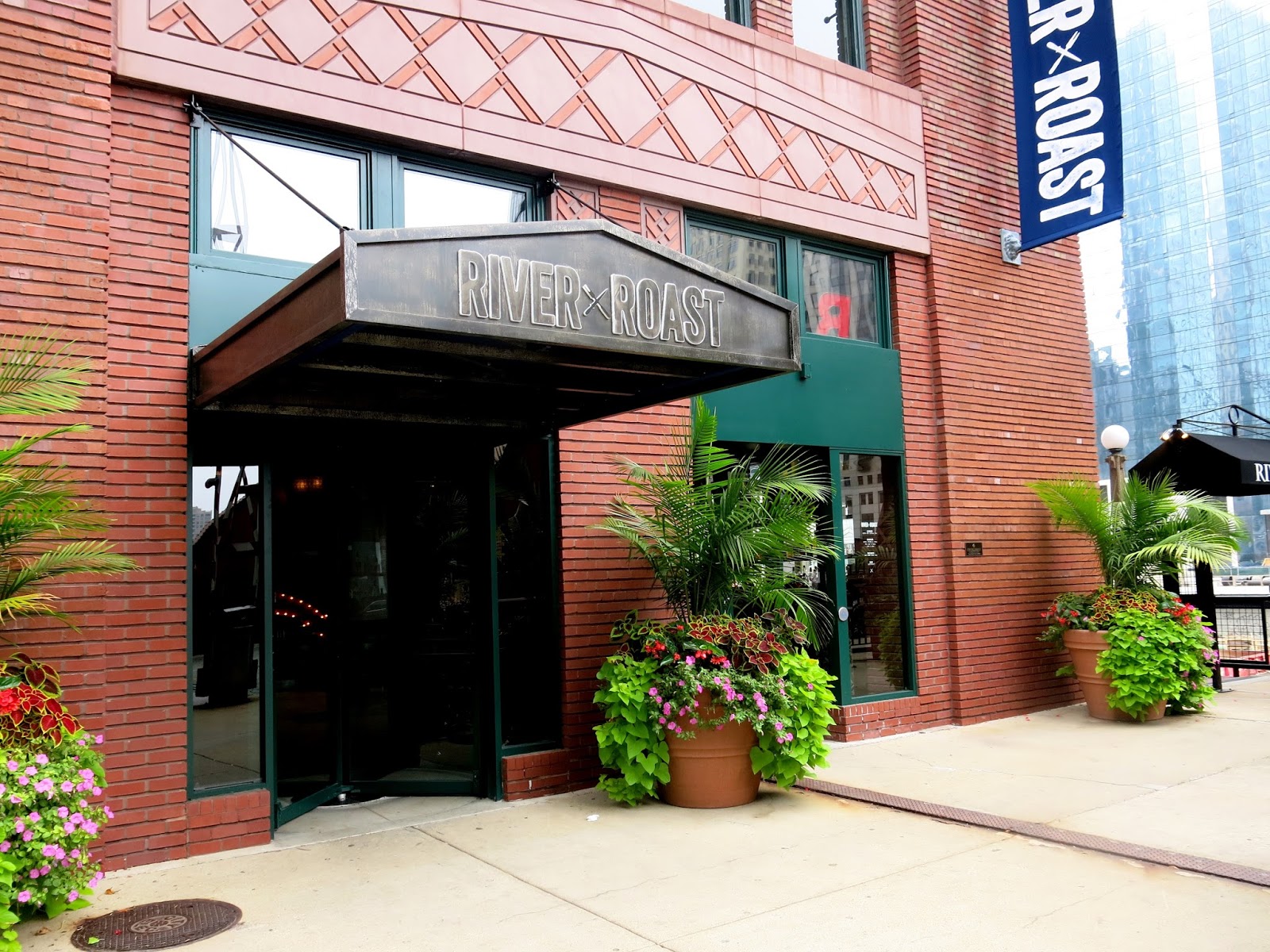 Regardless of Brandy's inflated ego, she recently got an invite to check out River Roast, one of Chicago's newest Southern comfort food restaurants, headed by Chef Tony Mantuano (of Spiaggia and Terzo Piano) and Chef John Hogan.  River Roast boasts not only a bounty of contemporary American fair with a relaxed tavern atmosphere, but also some of the most extraordinary dining views in the city, as the restaurant is located right on the river at the LaSalle Street Bridge.  The upstairs area is more trendy and lounge like, where as the downstairs looks more warm and friendly, with an open kitchen that almost resembles a market, displaying oodles of fresh fruit and veggies which add splashes of color to the otherwise gold toned wood dominated room.  The patio is where the best views can certainly be found, as it faces directly out to the river, where diners can watch all manner of boats float by.  Brandy was also delighted to find out that for brunch, River Roast brings in local blues bands to play for the patrons.  "Nothing like a little live music with your bacon and eggs," as she always likes to say. 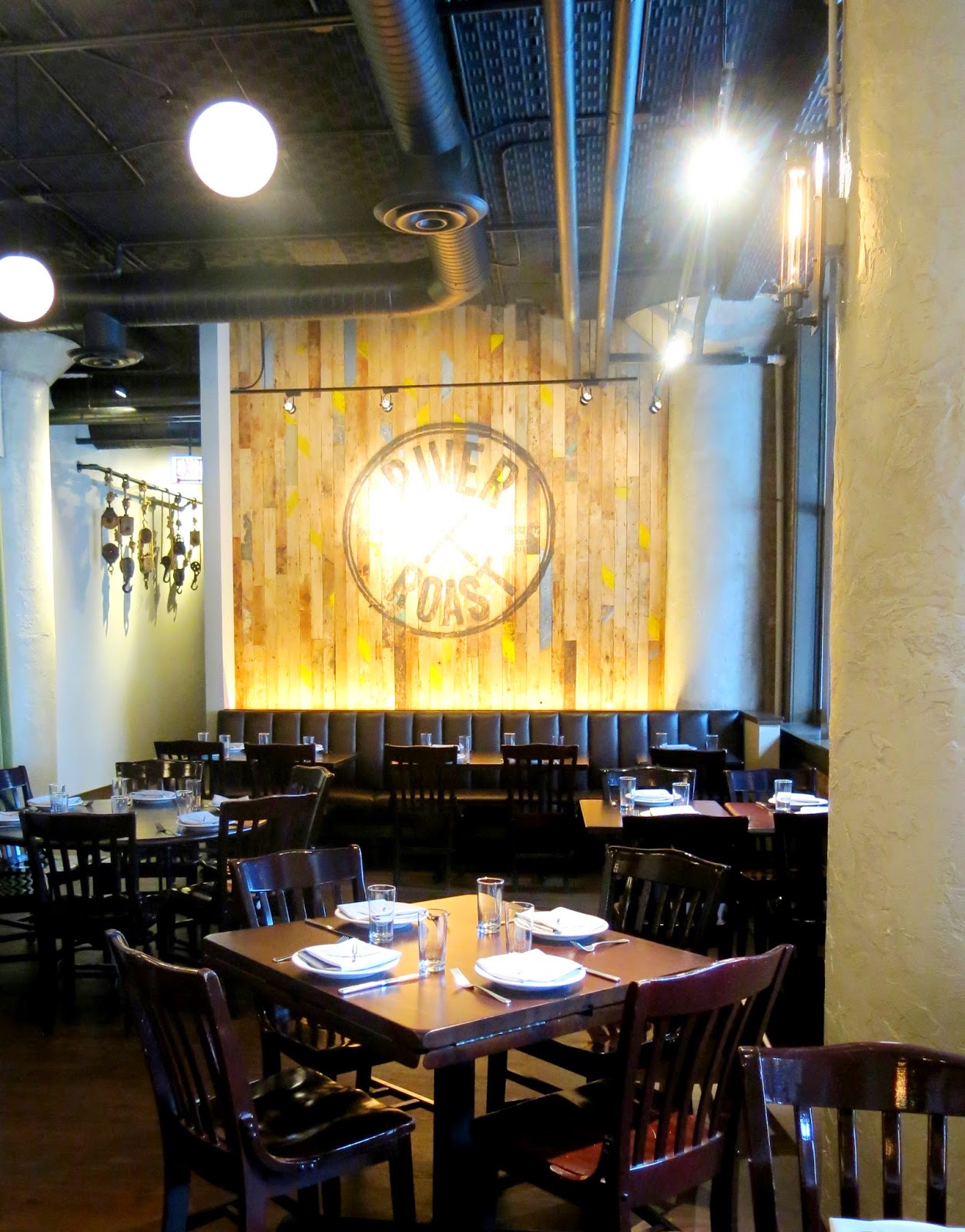 Brandy arrived to find a group of some of her fellow food bloggers seated banquet style in the downstairs dining room ("How did I know they were bloggers?  They were all on their phones," Brandy said.).  The morning started off with an absolutely perfect mimosa.  Bright, flavorful, but not too acidic or sweet, everyone at the table simply could not stop fawning over the cocktail.  "What's your secret?" One of the brunch guests asked a server.  "Lots of booze," the server responded.  "Cheers to that!" Brandy toasted. 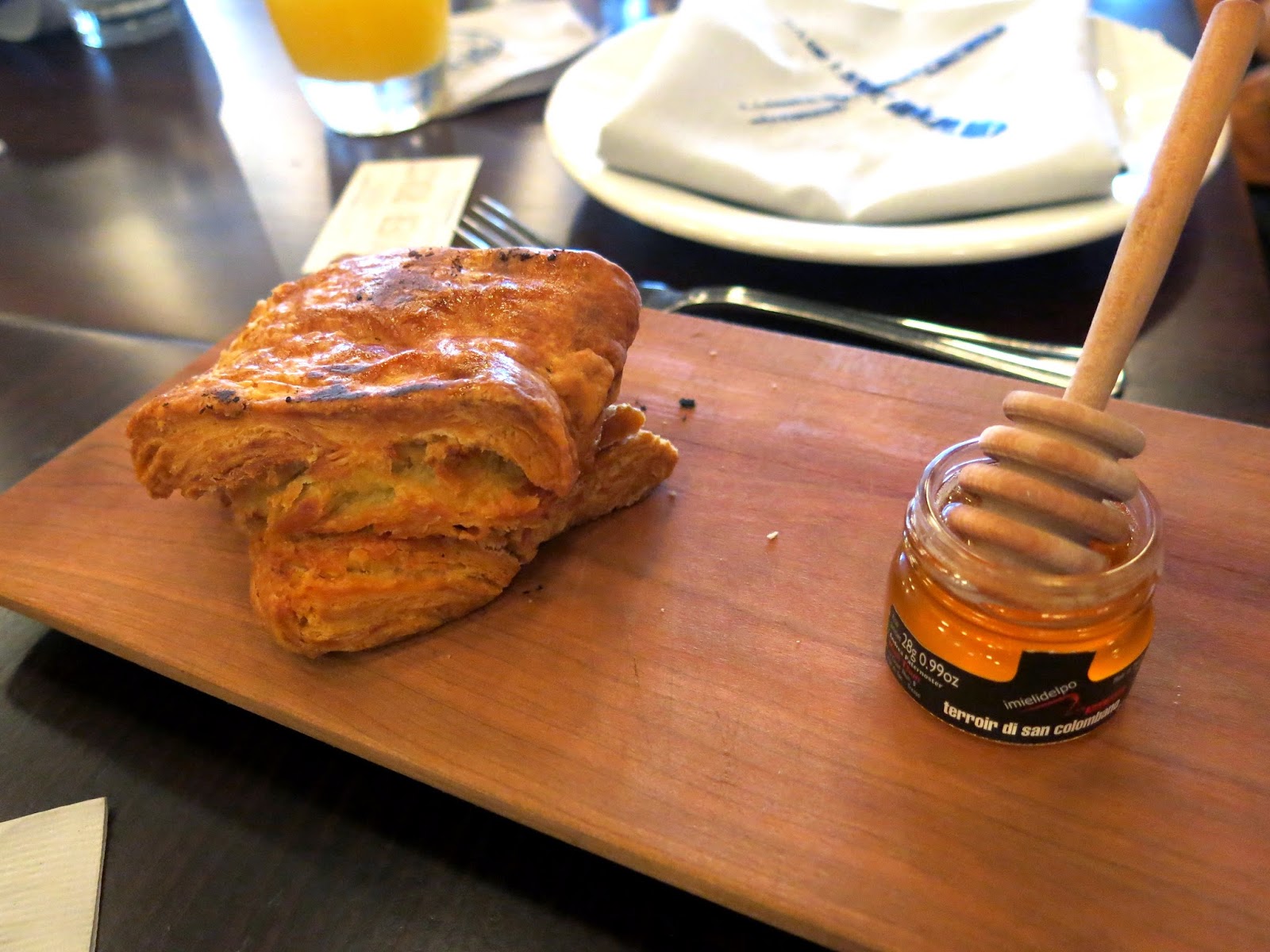 The first food to the table was a Housemade Biscuit and Honey.  The biscuit was flaky perfection with a good, rich buttery flavor, but Brandy absolutely adored the tiny honey pot and mini dipper that came with it. 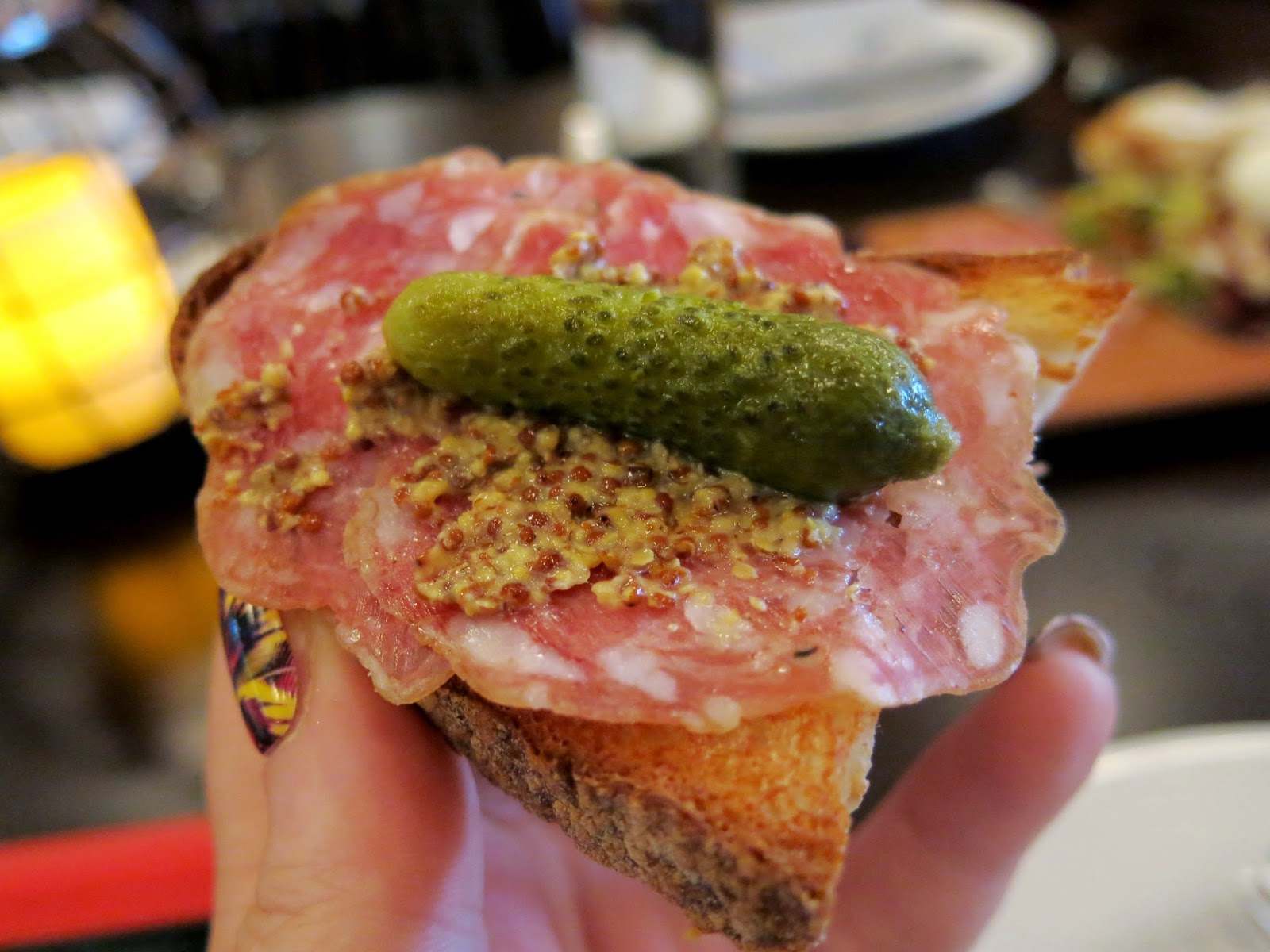 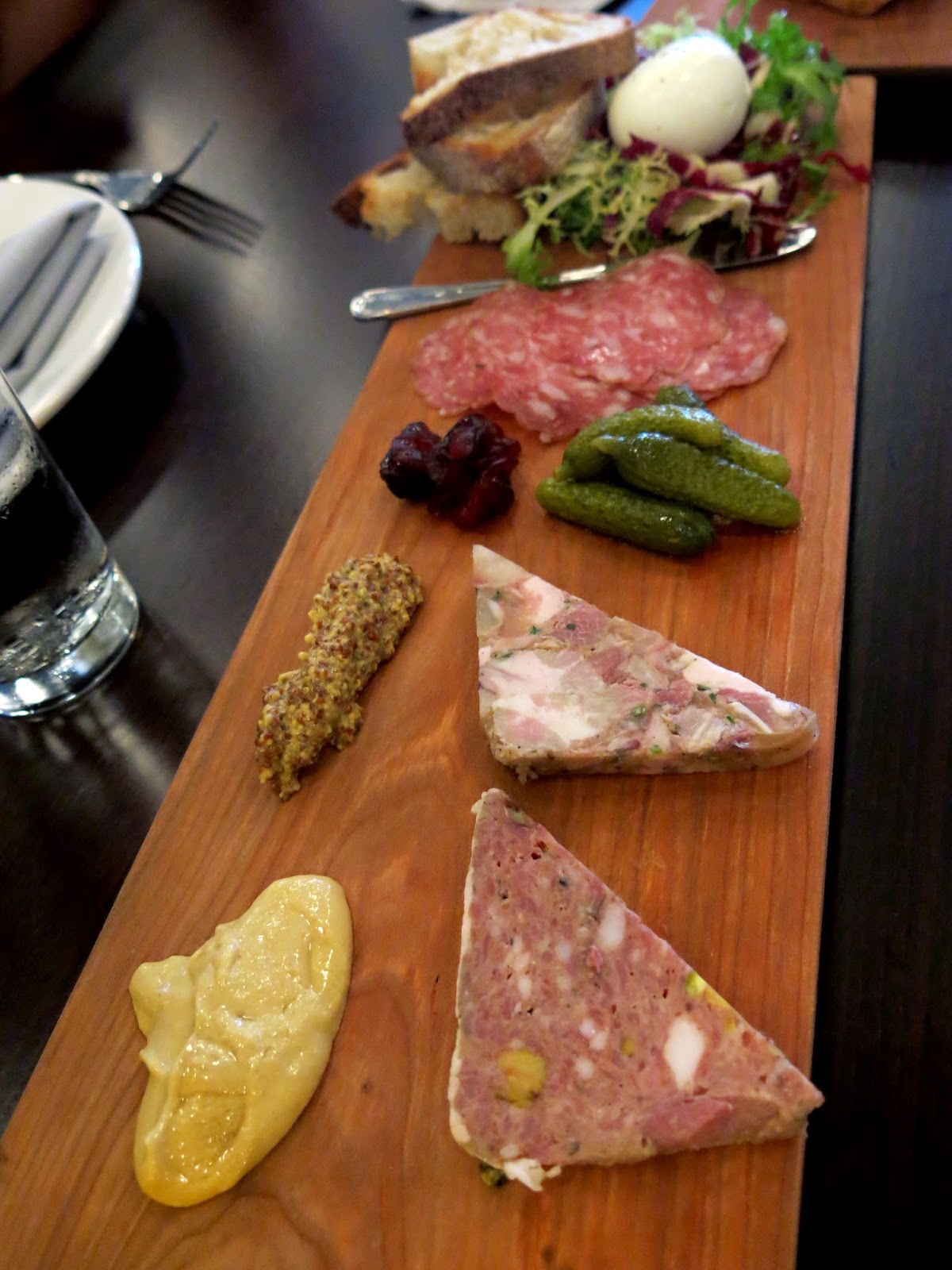 Next was the Ploughman's Platter, loaded with choice cuts of cured meat, head cheese, dried cranberries, tiny pickles, toasted sourdough slices, several blobs of different mustards, and a small salad with a soft boiled egg.  Brandy was glad to see an ode to her British roots presented here, though for a proper Ploughman's, she would have liked to see some cheese and perhaps a few apple slices.  "This is a fine charcuterie selection, don't get me wrong," she said, "Just maybe not a traditional Ploughman's like I'm used to."  Still, Brandy loved the variety of textures on the platter, from the crisp pickles to the soft head cheese and the chewy, sweet cranberries. 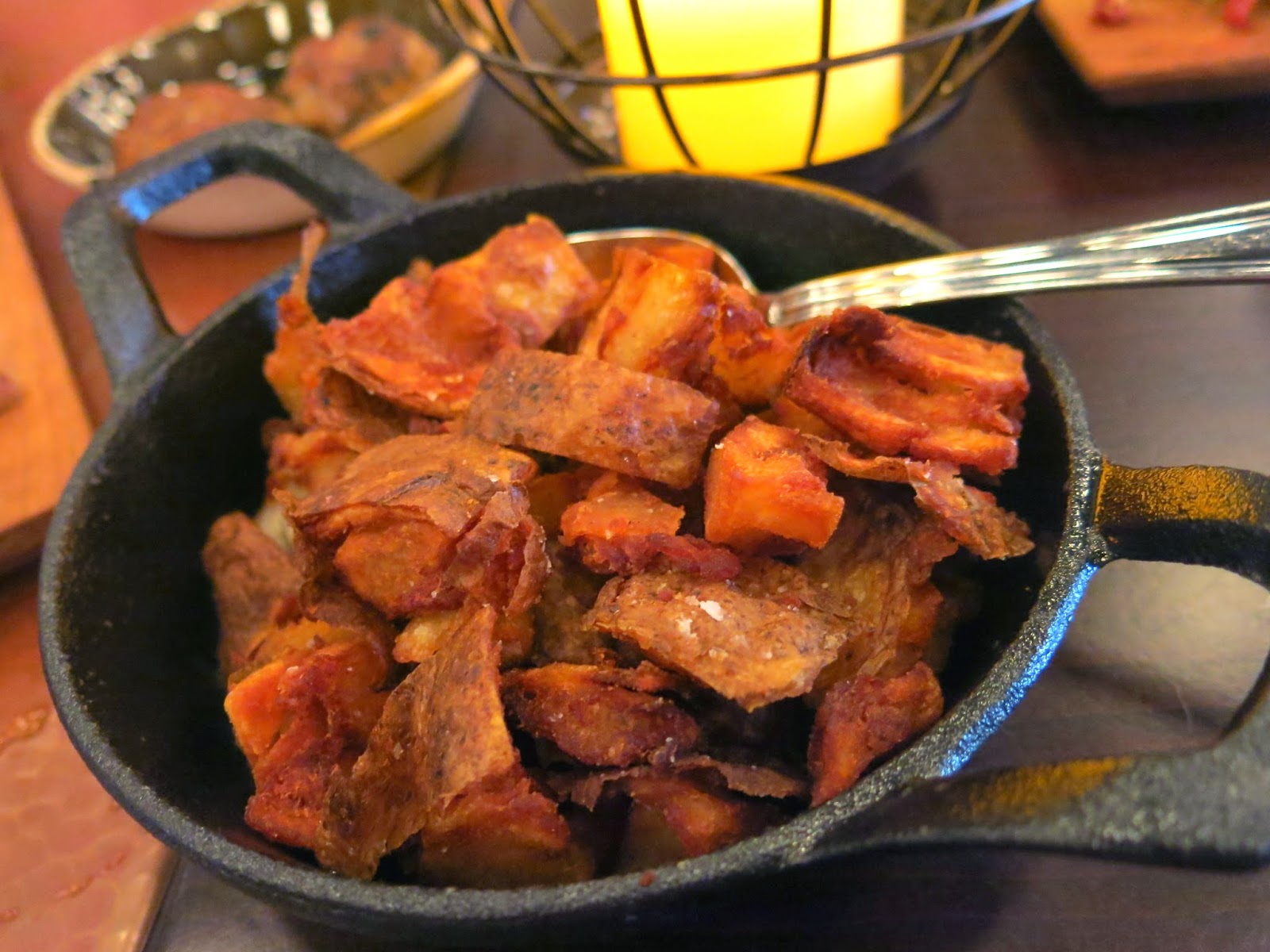 After the table was left to snack on that for a while, the torrent of food began to arrive.  For side dishes, the servers brought out tiny skillets with Housemade Breakfast Sausage, which was fatty, rich, and well spiced.  The surprise star of the table were the Crispy Potatoes, which almost everyone had a second helping of.  True to their name, the potatoes were crackly crisp, yet light and not greasy at all. 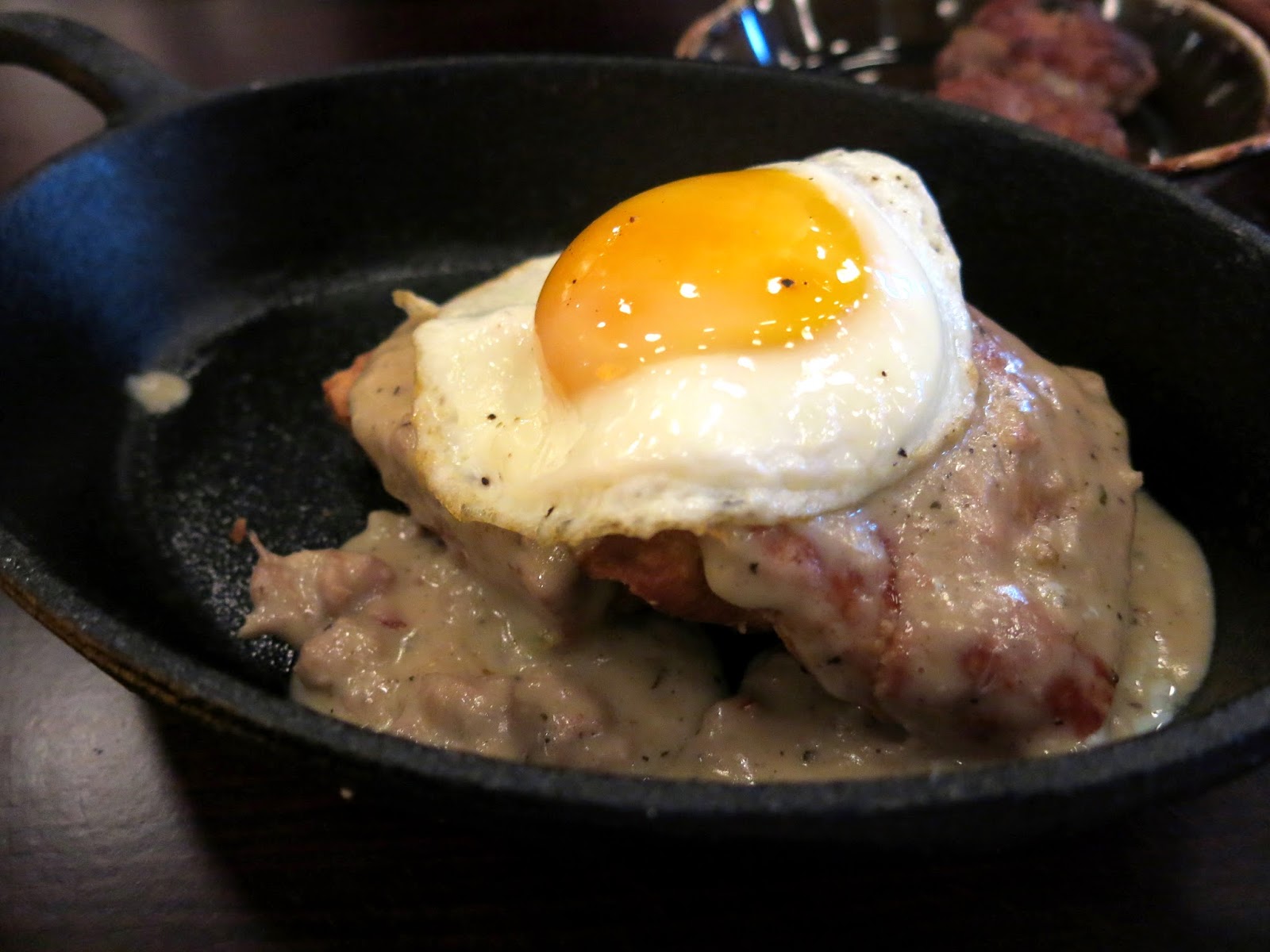 The first of the two entrees was the Biscuits and Gravy.  Utilizing the same flaky, buttery biscuits, the dish was then doused in a gravy made with pork and topped with a sunny side up egg.  The gravy was very nicely seasoned, just enough to wake up the palate, and the richness of the pork made the dish very filling. 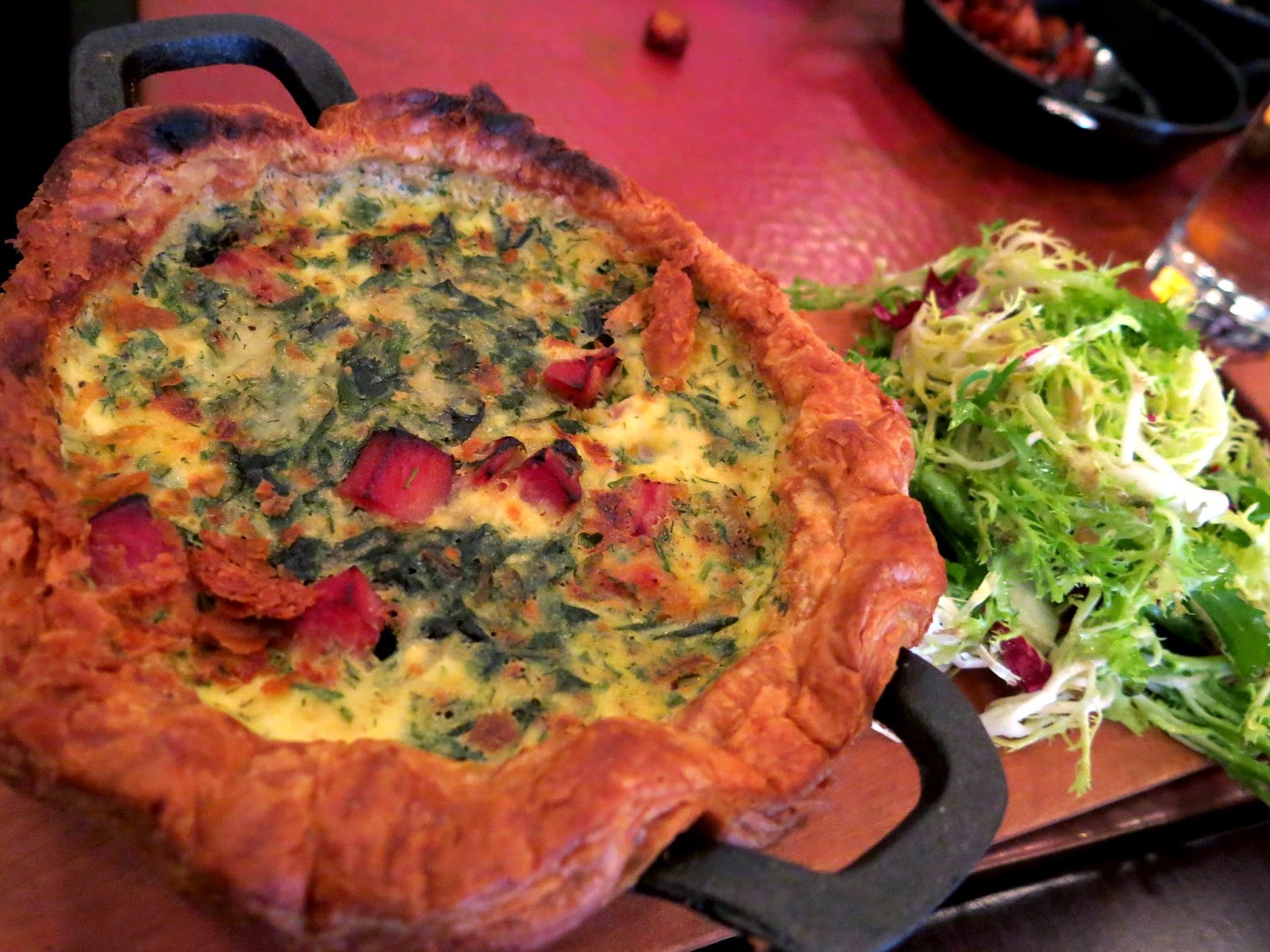 Lastly, the dish that made the table groan for mercy was the Savory Tart.  "It's a quiche, surely?" Brandy questioned when she laid eyes on it.  "Oh, it's more than a quiche," the server said, "This is more cream than egg, really."  The filling had been swirled with Swiss chard and dotted with cubes of bacon lardon, giving it a beautiful, yet rustic appearance.  The tart was so tender that Brandy found it difficult to cut and lift a piece from it's dish, and so throwing all decorum aside, she simply dug her fork into the thing and scooped up gobs of the creamy, fluffy filling and the flaky, buttery crust.  The filing was indeed more indulgently creamy than a typical quiche, as it had a good deal of sheep's milk cheese mixed into the almost souffle like inside.  "It feels like I'm eating pure butter...and I like it," as Brandy said.  The bacon lardons gave a good bit of smokiness and chew to the tart, and the Swiss chard lent a little tang and bitterness in a very pleasant sort of way that cut through the silk texture. 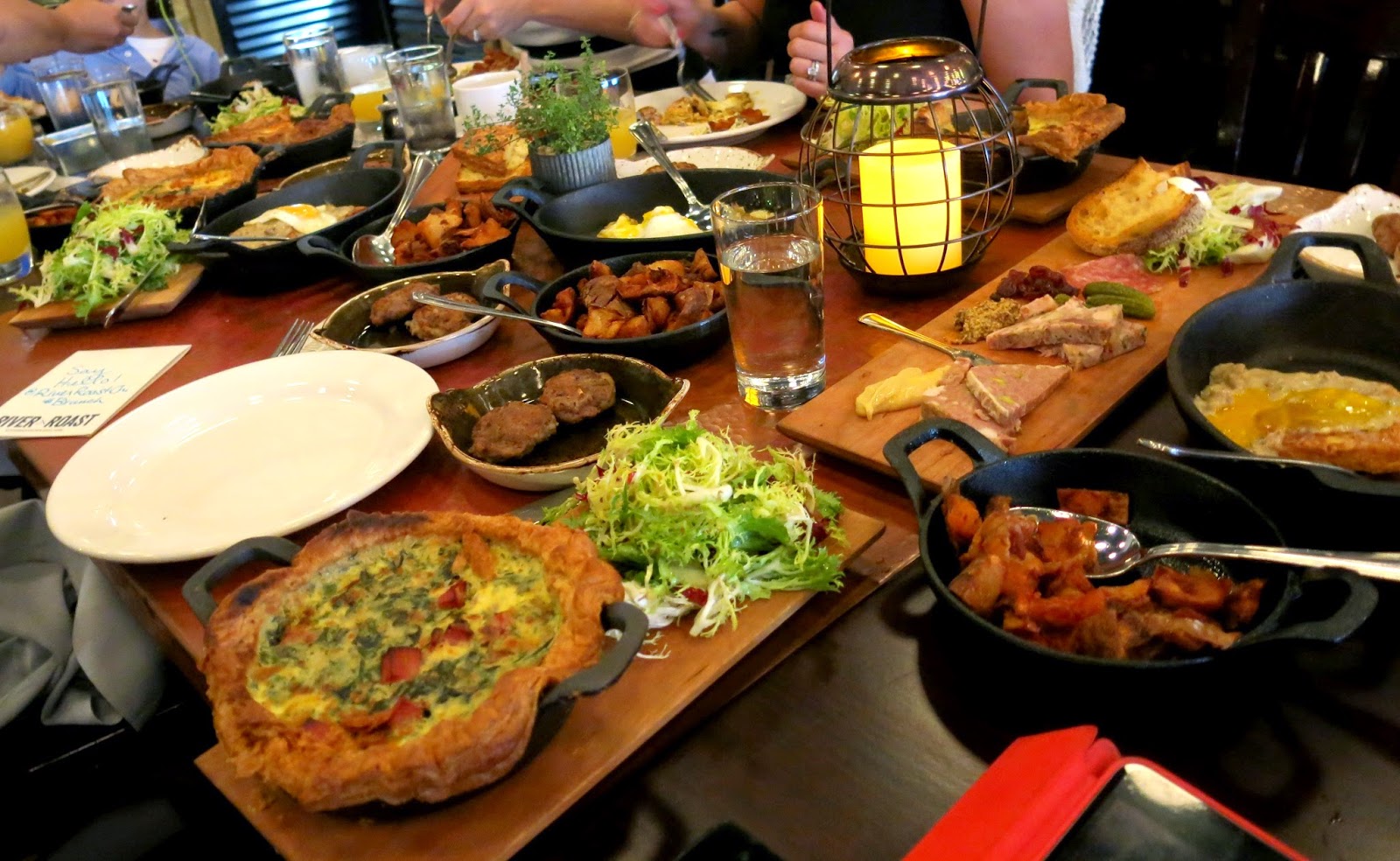 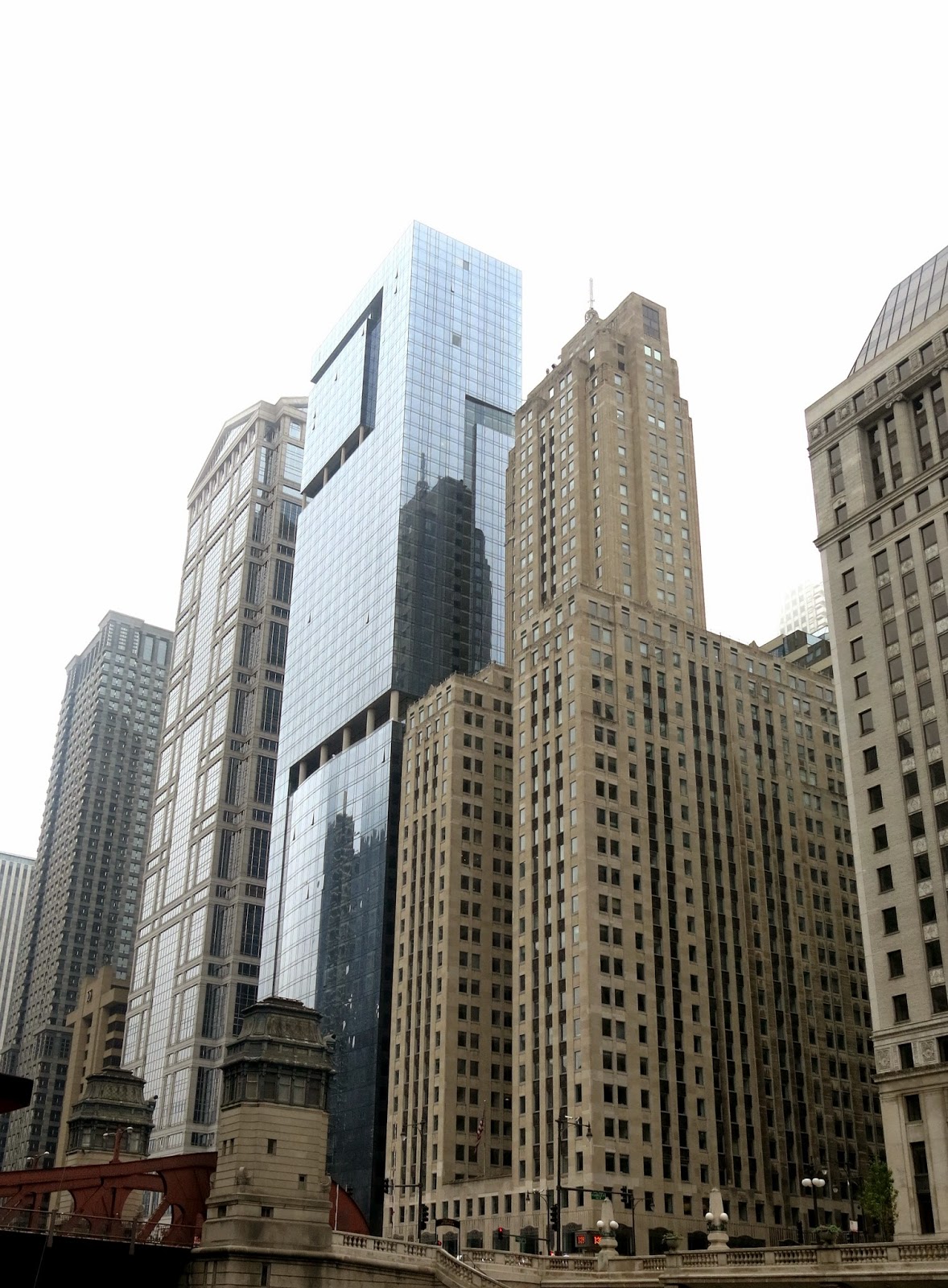 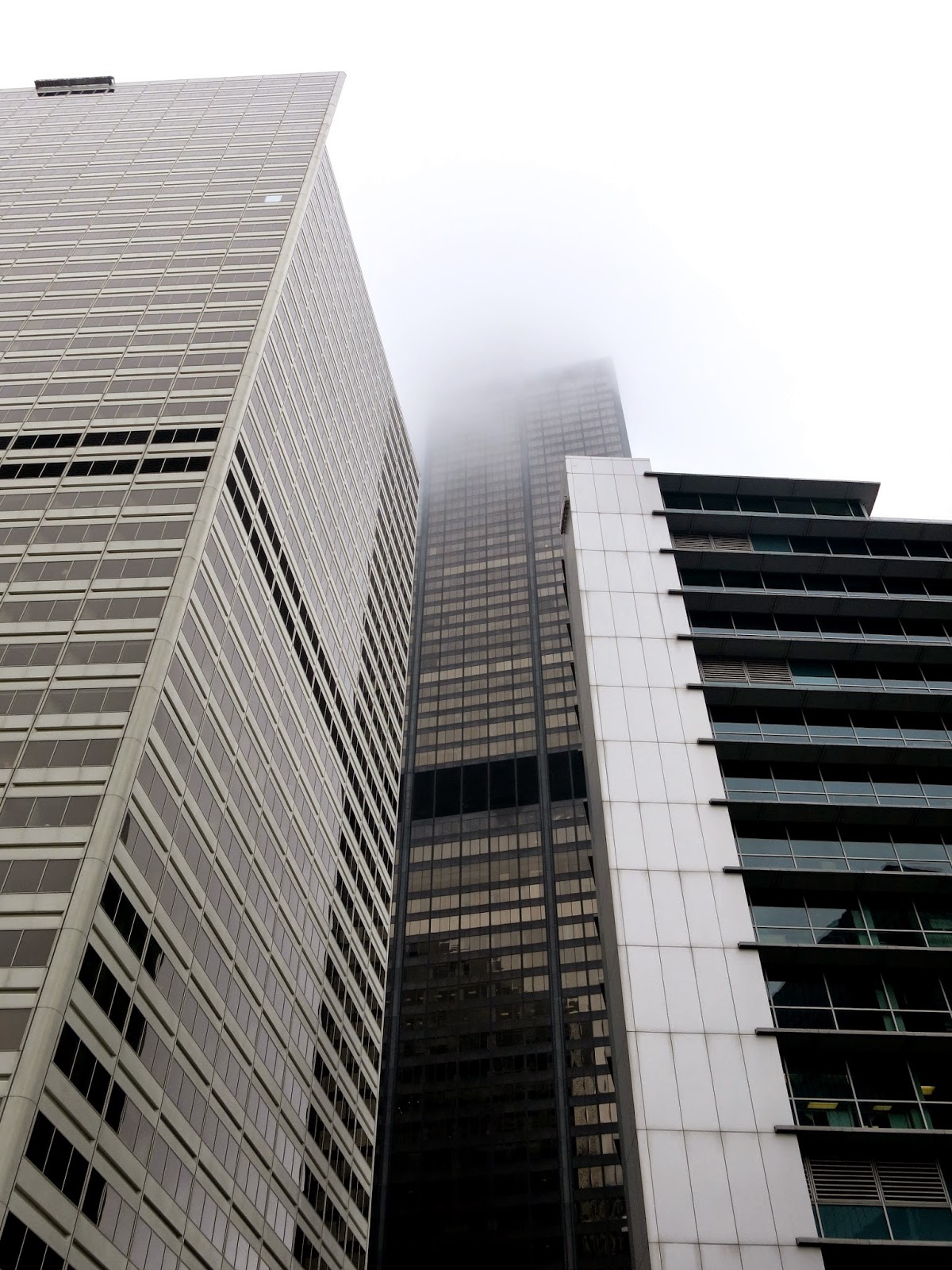 After thoroughly stuffing their faces, the attendees were then treated to an architectural tour from Wendella Boats, which picked them up right from the dock at the restaurant.  Although Brandy has done similar tours several times now since moving to Chicago, the wonder and majesty of the city she now calls home never seems to wain.  The day was rather foggy and unseasonably cool, but that didn't stop Brandy from snapping away at the mythical buildings that dominate the landscape of this wonderful city. 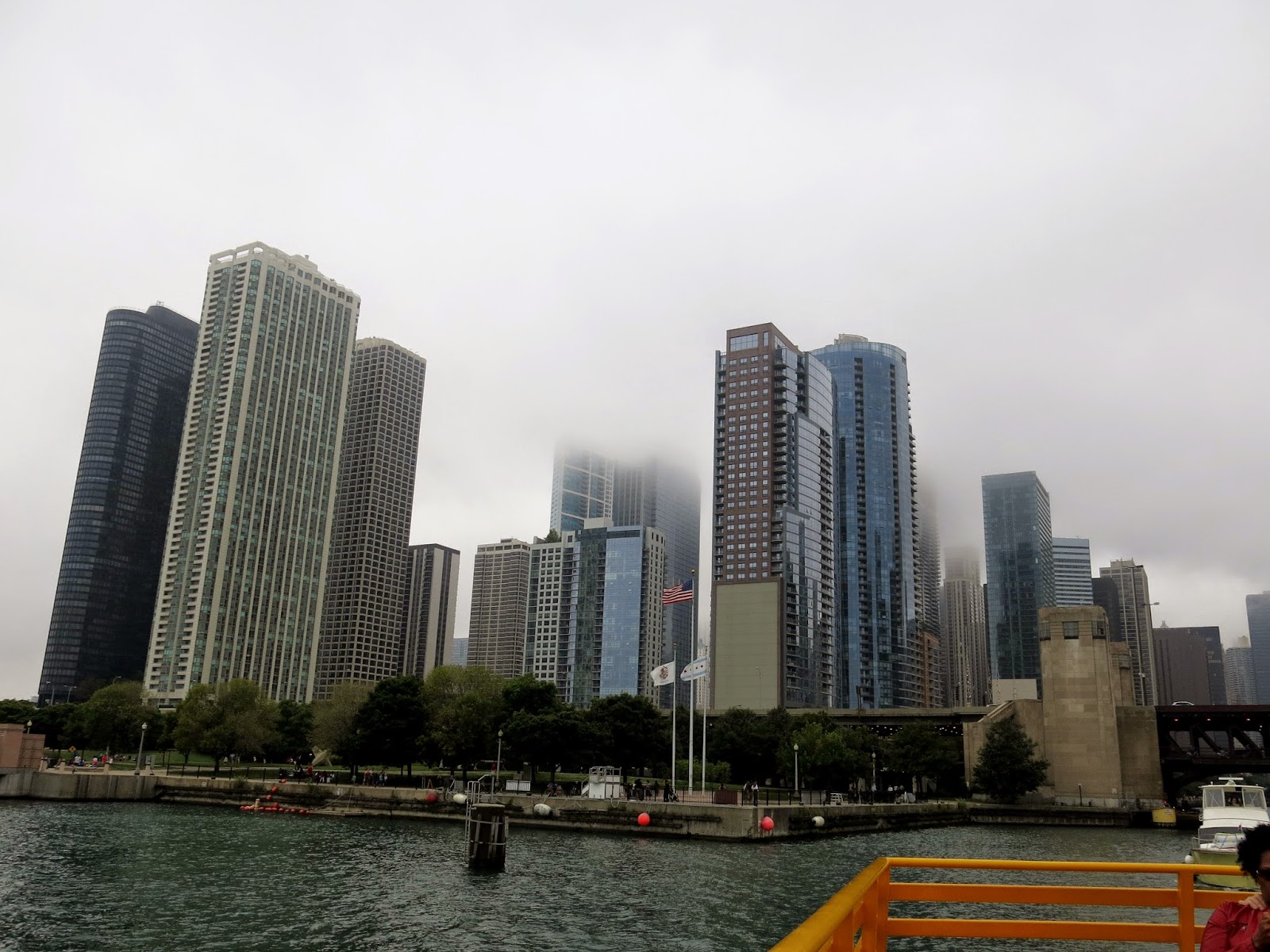 Though Brandy was all but ready for a nap when the boat arrived back at the restaurant, she couldn't help but grab a seat out on the patio, order one more drink, and relax to the blues band as she watched a fleet of kayakers row their way down stream.  "Comfort food indeed!" she said to no one in particular, "I'm beginning to feel a little too comfortable.  They may have to pry this seat away from my cold, hard bum if they want it back for dinner service."

Make sure to check Bunny and Brandy's Facebook Page for more pictures from the brunch and the boat tour! 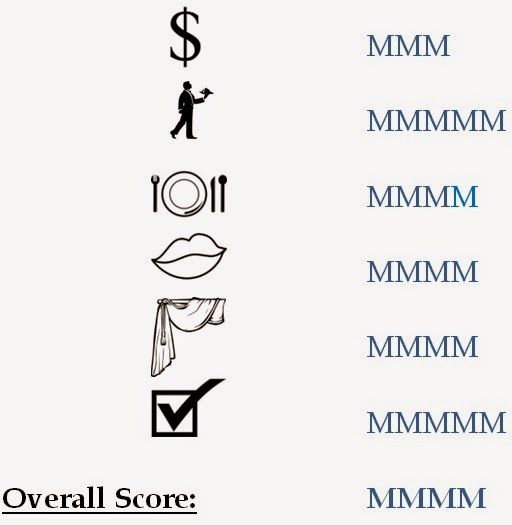