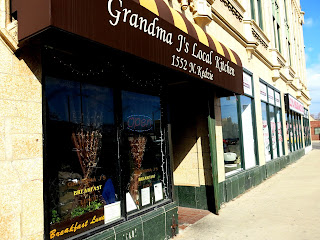 It's hard for someone as restless as Brandy to ever truly feel at home.  Having lived in almost every continent on Earth (excluding Atlantis), Brandy has called all sorts of places home; from igloos to bungalows, to wigwams and yurts, Brandy has had the pleasure of settling down for periods of time in all sorts of domiciles, which has taught her that home truly is where the heart is.  "Sometimes I lived in a home," she says, "But at other times I've just had a room in which to sleep.  Granted, sometimes it was a quite comfortable space, but in the end I'd rather have a mess of a home than an immaculate room."  Having settled down for quite some time now in Chicago, Brandy can honestly say she has found one of those homes, and is after all quite comfortably surrounded by the various trinkets and trappings of her travels.  Sometimes that comfort can make it difficult to leave the home, but Brandy's ultimate thirst for adventure (and laziness when it comes to washing her own dishes) always wins out. 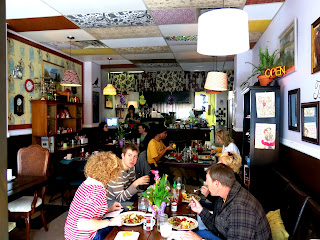 It was while out on North Avenue one day that Brandy was driven west by a hoard of hipsters and ended up in  Humbolt Park, just in front of an unassuming store front labeled Grandma J's Local Kitchen.  It was the chintzy curtains in the window that first drew her attention, and upon entering the place, Brandy had to stop and wonder for a moment, for she appeared to have walked into her own home.  Delightfully mismatched chairs and tables were scattered around the small room, decorated with an eclectic mix of chachkies and vintage photographs.  Even some of the ceiling tiles above had been covered in various fabrics, giving the appearance of a patchwork quilt.  Brandy was so overwhelmed by the feeling of being at home that it was a good few minutes before she came to her senses and found a seat (she also had to resist the urge to go looking for her dressing gown and slippers). 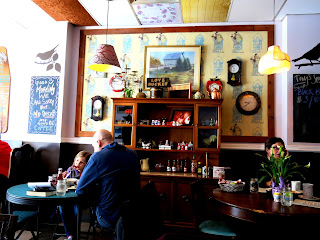 Along with the menu, Brandy's table was presented with some diced melon and an orange slice in a teacup, as well as some iced water in mason jar.  The Swedish Coffee on the menu grabbed her attention straight away, but the young woman serving her let Brandy know that because of a late start to the morning, the Swedish coffee wasn't quite ready, as it took a sort of elaborate process to brew, so Brandy went with the regular coffee instead. 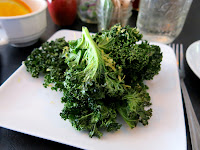 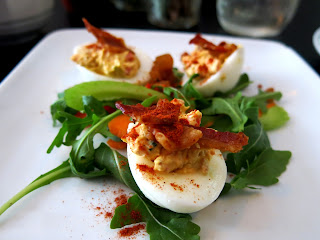 The menu began with an intriguing list of "snacks," from which Brandy chose two; the Deviled Eggs and the Crispy Kale.  The eggs could not have been more perfect with soft whites, creamy filling, and crispy bacon adding a subtle little twist to such a classic dish.  Brandy also greatly appreciated the small salad served with the eggs, which helped to break up the richness.  The kale was also delightful, with the outer part of the leaves perfectly crunchy and in middle still a little crisp and chewy.  The dish had been topped off with some lemon zest, which added a brilliant brightness to it.  "It's like eating a sunny day in the park," Brandy mused. 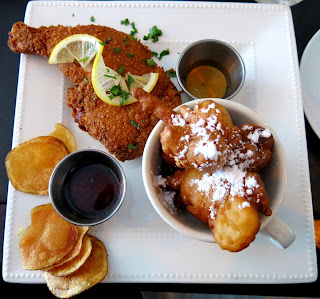 For her entree, Brandy chose the Chicken and Waffle Fritters and was presented with a gigantic plate of fried goodness.  Brandy was truly taken aback by the massive portion of chicken she had been given, which also came with a pile of delicious looking fried dough, local honey, real maple syrup, and a few home made potato chips.  "They've done a really smart thing here," Brandy said, grinning to herself while nibbling on one of the fritters.  For those who may not understand, waffle irons are the bane of a small kitchen's existence, as they take up a massive amount of counter space and really only do one thing, but by instead choosing to fry the waffle batter into fritters, the chef had cleverly avoided this problem while still providing an excellent dish that was both original and classic.  The chicken was some of the best Brandy had ever had; incredibly juicy interior, coated in a cornmeal crust that had an amazing crunch and flavor.

Brandy could have happily sat all day at her little table, having the kitchen bring her every dish on the menu from breakfast till dinner (which would have been made easier by the amazingly low prices of around $3 for small plates and $10 for large ones, an incredible value for the quantity and quality of the food), but with the scarcity of space she just couldn't bring herself to deprive others of the experience of eating at Grandma J's.  The feeling of warmth and care she got, however, was well worth the trip, and she carried it with her all the way home, to her own eclectic bohemian living room. 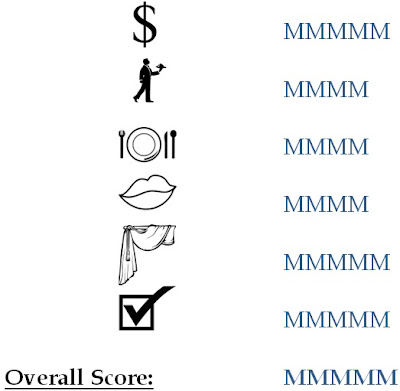