Sarks in the Park or All Bark and No Bite 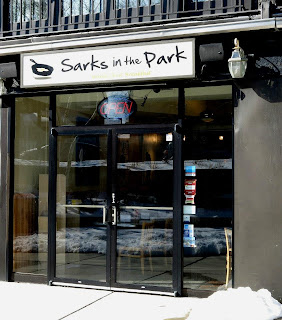 Brandy has always been an early riser ever since a garbage truck woke her up one morning in 1929 and, after she was unable to fall back asleep, she did some personal financial management that ended up helping her to avoid the stock market crash just before it hit.  While waking up early can have its benefits (getting more things done, seeing the sunrise, reading the newspaper and returning it before your neighbor knows it was missing), it can also build up quite an appetite in someone who usually prefers to wait for brunch.  Some days, Brandy is able to restrain herself for that magically concentrated combination of meals, but other days, its just more productive to brunch early on.  When asked if an early brunch is really just a breakfast, Brandy's response was a raised eyebrow and the statement, "Brunch is a state of mind, not a time of day." 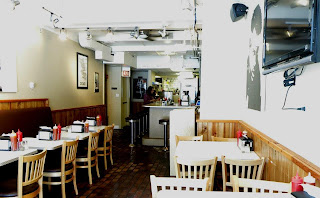 It was one of those early days that Brandy ventured to Sarks in the Park for a quick brunch.  It was so early in fact that the place was virtually deserted.  The white walls and exposed ceiling seemed especially stark, but a few large graphic paintings did help to add some color.  Brandy took her seat at a table by the door and a tired looking, but helpful waitress dutifully brought over some coffee and a menu.  Quite a few things jumped out at Brandy very quickly, so when the waitress came back around a minute or so later to collect her order, Brandy just let the first two things she saw jump out of her mouth. 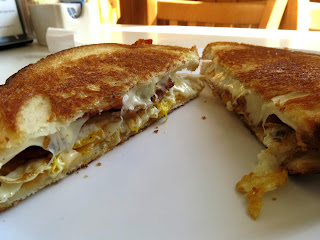 She started off with the Sark's Special Grilled Cheese, the traditional comfort food classic with a fried egg and crispy bacon added.  At $6.50, Brandy thought the sandwich a pretty good deal, until she realized that the price included no sides (hashbrowns were an additional $3.00).  The sandwich was decent enough; though a little skimpy on the bacon, the melty cheese and the egg in the middle were pretty tasty, but Brandy couldn't help feeling the worst possible thing that could be thought about brunch, "I could have made this at home."  Brandy wished she had investigated the menu a little further to see if there had been a bowl of soup she might have paired with the thing that would have maybe made it a little more special. 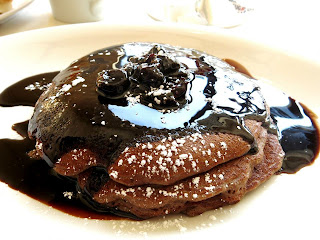 For her sweets, Brandy chose the decadent sounding Black Forrest Pancakes, which the menu claimed was a stack of dark chocolate flapjacks, topped with chocolate ganache and a warm cherry compote.  The pancakes themselves were decently sized with a nice chewy texture, but lacked in flavor.  What the menu called "ganache" seemed to be nothing more than store bought chocolate syrup, both in texture and in taste, which was far too sweet.  The cherries on top did a nice job of breaking up the saccharine dish, but rather than a compote, they seemed to be plain old re-hydrated dried cherries that hadn't been cooked at all, sort of a step above canned pie filling.  Once again, Brandy found herself relatively enjoying the dish, but thinking she could have probably stayed at home and made something similar ("And at home this wouldn't have cost anywhere near $10," she grumbled to herself).

Sadly, though the menu boasted some exciting options, Brandy seemed to have chosen two of the more over priced and bland items available.  "Thank goodness I woke up so early this morning," Brandy thought, "Now I can just wait a few hours before looking for another, more exciting brunch!" 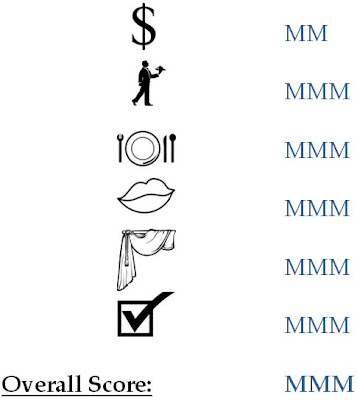