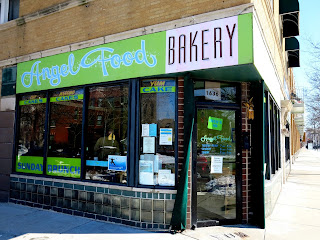 The culture we live in today is one obsessed with its own past.  Old musicals are becoming blockbuster movies, and old blockbuster movies become Broadway musicals, classic songs are being covered by new artists on the millions of musical television programs every week, and lazy writers wait slowly for works of the old masters to become public domain so that they can write sequels to them.  Its hard for Brandy to feel nostalgic about anything any more, seeing as how most of her childhood memories were made before the popularization of the art of photography or audio recording, so when she sees this sort of cultural recycling, she can't help but shake her head and wonder.  "Didn't they just make a film about a super hero?  For goodness sake," she's been heard to ruminate while passing a movie theater, "Why not something new, like a movie about someone my age.  Maybe someone who explores a foreign city by partaking in its rich culinary tapestry   That is a movie I would watch!" 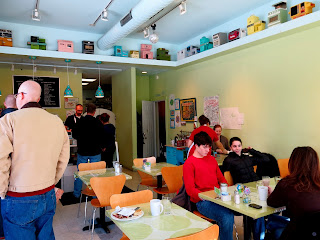 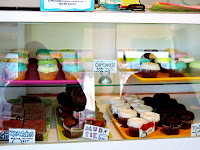 But this longing to relive "the good old days" has even manifested itself in the culinary world in the form of "comfort food," that rare bird that plays on our collective memories of safe flavor combinations, banking on the emotions brought up when the eater samples something so close to home they have to check the kitchen to see if their mother took a job as a line cook they were unaware of.  It was just such a place that Brandy stumbled upon in the Edgewater neighborhood; Angel Food Bakery, a small cafe that prides itself on bringing back the joyful flavors of an earlier time.  It was the vintage aprons in the window that first drew Brandy's attention, and upon entering she found the place to be covered in the bright chartreuses and tangerines of the early 1960's.  A ledge around the dining room boasted an impressive collection of vintage toy ovens, hinting at the sort of flavor profiles spotlighted in the glimmering bakery cases.  Without even realizing she was doing it, Brandy took up residence at one of the small tables and began to peruse the brunch menu. 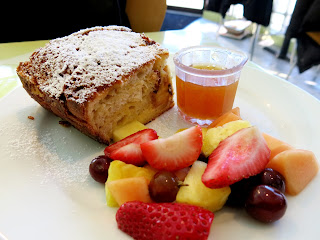 The food was ready in a flash.  Brandy started off with something called Baked French Toast, which came served with a lovely array of fresh fruit and a shot glass of vanilla orange syrup.  She found the dish to be more of a bread pudding than a French toast, as it was a layered loaf of buttery bread, covered in powdered sugar.  Brandy also thought it lacked the custard like quality of a French toast, but enjoyed the crunchy crust on top, and the vanilla orange syrup had a wonderful tart sweetness that helped to sooth the heavy bread. 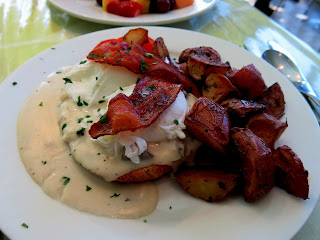 For her entree, Brandy chose the Creamed Wild Mushrooms, which she was delighted to see was really just a re-worked version of the traditional full English breakfast.  "Now this is something I can feel nostalgic about!" she exclaimed as the plate was put down before her.  Though lacking the baked beans and blood sausage, the dish did contain a slab of more buttery bread, two perfectly poached eggs, two roasted tomato slices, and two strips of crispy bacon, all covered in a creamy mushroom gravy and assisted by a side of roasted potatoes.  Though the texture of the potatoes and the herbaceous rosemary flavor was spot on, Brandy found them to be a tad salty.  The bread was so hearty that it proved a little hard to cut through, but it was tender in the mouth, and the creamy mushrooms lent a brilliant earthiness to the dish that was brightened up by tomatoes. 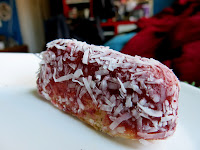 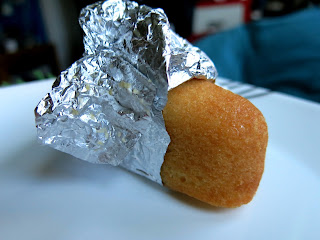 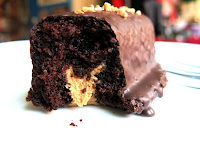 Not wanting to let the good-old-days feeling go quite yet, Brandy grabbed a few things to go from the bakery cases: first was the Trailer Park Trio, which consisted of a yellow cake filled with marshmallow cream, the same cake rolled in raspberry jam and coconut, and a decedent chocolate version filled with peanut butter cream, all of which had a cylindrical shape that not only inspired their name, but was also meant to remind the viewer of the storied snack cakes of old.  "I thought they stopped making these things," Brandy said, pointing to them.  The kindly clerk behind the counter smiled strangely at her, perhaps thinking she as joking. Brandy found the cake of the pastries to be perfectly supple with an odd but lovely bit of texture from what she supposed to be corn meal.  The cream on the inside was light and delicious, especially in the chocolate version.  Brandy's favorite of the three was probably the raspberry version, which for some reason made her thing of the word "Zing!" 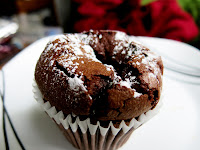 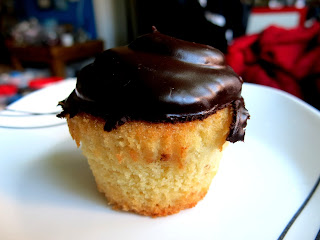 In addition to that, Brandy also took home three cupcakes in very nostalgic flavors: Boston Cream, Malted Milk Ball, and Mudpie.  The Boston Cream was perhaps the most traditional of the three; a spongy yellow cake that had been filled with a thick, rich vanilla pastry cream and topped by an equally rich chocolate ganache   The Mudpie was amazingly dense with a crunchy top, almost like a chocolate sofflee, and took Brandy two sessions to finish.  To her surprise, Brandy found the Malted Milk Ball to be her favorite, due to the moist chocolate cake, malted cream frosting, and crunchy bits of candy on top.

At the end of the day, the tidbits at Angel Food Bakery left Brandy feeling nostalgic for memories she didn't really have, but was quite happy to have imagined them.  With most entrees around $10 and most pastries around $3, there seemed to be something for everyone's budget, with a heaping helping of love at no extra cost.  "Perhaps remakes aren't such a bad thing after all," Brandy mused, "After all, a good recipe is meant to be treasured and passed on, with each new maker adding his or her own special twist to improve it.  But I still don't see any need for another movie about those damned Hobbits." 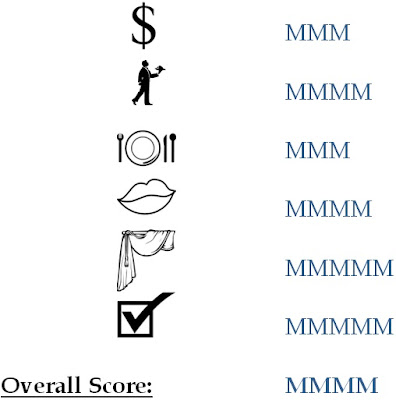