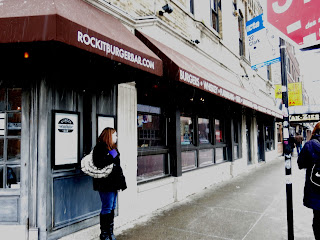 We all get older, that is a fact of life, but for someone with an old soul like Brandy, sometimes its hard ot pinpoint just how much they've aged.  Brandy's true age is a well guarded secret (rumor has it that Ernest Hemmingway was the last person Brandy told her real age to, and he died with that information unexposed) so much so that she usually doesn't even celebrate her birthday, but this year for some reason was a little different.  Whispers began immediately that this birthday must be a special one when Brandy sent out a few invitations, requesting her friends to meet her at Rockit Burger Bar, right across the street from Wrigley Field, to celebrate her "coming of age," as she put it. 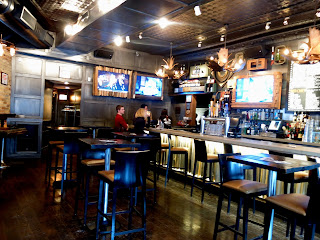 A regular cast of characters like Bailey Blue, Hawke, and Polish rock star Baranina were joined by new friends like Brocco Lee Binto (inventor of the controversial Cyber Cycle, a self peddling bicycle that has a tendency to take its riders several miles away from their intended destination) and Bain Marie Bistre (owner of Doggie Delights Bakery, a subsidiary of Honey Bee Bakery, that produces all natural and delicious treats for canines).  None of those gathered quite knew what they were in for.  "How old do you think she really is?" Bailey asked Hawke.  "Do you think this is her hundredth birthday?" mused Bain Marie.  "I've known her for twenty years and I only just learn when her birthday was!" said Brocco.  Finally Brandy arrived and joined her friends at the stately bar while their table was readied.  Worried about upsetting the poor dear, no one said a word about it being her birthday, but simply acted as if this were any old brunch she had invited them to. 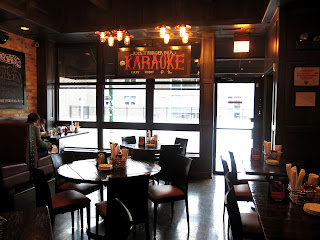 The main dining room had a polished but laid back atmosphere, boasting huge televisions on every wall that had been bordered in interesting wood paneling to make them blend into the rest of room, creating a sort of dressed up sports bar kind of feel.  Most everyone partook of the $5 mimosas (Brandy was a little surprised more interesting cocktails weren't on offer), except for poor Bain Marie, who sipped on some tea due to a soar throat ("Silly me!  I was mixing a batch of Butter Biscuits when I accidently inhaled half a bag of wheat germ!" Bain Marie said with a cough). 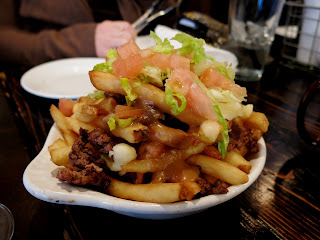 Straight away, Brandy insisted on ordering a starter for the table, the Burgers and Fries poutine, which in addition to the traditional fries, gravy, and cheese curds, added ground beef, shredded lettuce, and tomato to make for a wonderfully salty snack.  The gravy was perfect and light, the fries crispy and tender, the cheese curds just a little bit melted, and the crisp vegetables helped to balance all of the fattiness.  "Its like when you have left overs from a late night burger place," Hawke said, "And you re-heat them all together, but this time they are freshly made and awesome."  Most of the table had never experienced the joy of a poutine before, so Brandy seemed happy enough to have introduced them all. 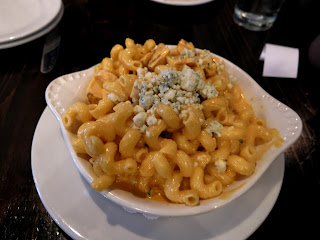 Bailey sampled the Buffalo Mac and Cheese for her entree, which seemed an odd combo at first, but wound up being a delightful mix of ooey gooey pasta goodness and spicy chucks of  chicken, topped off with blue cheese crumbles.  "Really great stuff!" Bailey exclaimed, "Like dipping hot wings in some mac and cheese!" 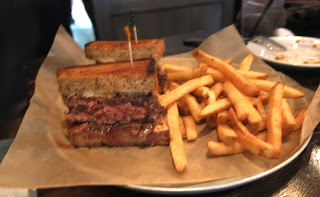 Hawke went more traditional with the Patty Melt, here with mushrooms, onions, and two kinds of cheese.  He felt his sandwich was a little over toasted, almost to the point of being burnt, and that the meat was a little more under done than he would have liked, and that the overall dish was just average. 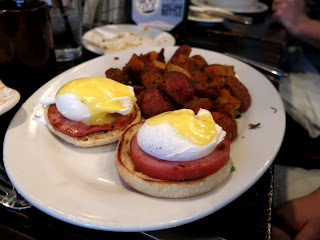 Bain Marie went for the Eggs Benedict with House Potatoes.  The benedict was pretty traditional (Brandy would have loved to have seen something a little more creative, like a Benedict Burger, but alas) but very well done.  The potatoes were especially nice, with a good coating of spice on the outside. 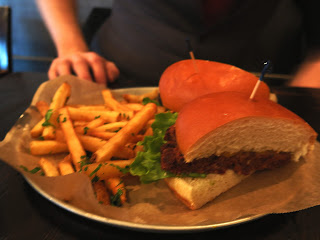 Brocco, a recently converted vegetarian, went for the Vegetarian Burger, featuring the Barbecue Red Bean patty, as well as some cheese and a host of veggies.  Brocco said that the barbecue flavor really shone through, and that the seasoned fries on the side were really well matched to the burger.  "I'll have to program my Cyber Cycle to remember this place!" he said through a mouthful of burger.

Brandy pulled out the big guns with the Truffle Burger and a side of Truffle Fries ("It really must be a big day," Bain Marie whispered to Baranina, who due to her contract with her record company had expended all allowable calories on one bite of poutine and was now snacking on a lemon wedge as her entree).  Brandy thought the burger could not have been more perfect; juicy, medium rare, and with just the subtlest hint of truffle oil mixed in with the mushrooms and cheese.  "Adding ketchup to this would be sacrilege," Brandy instructed the others.  The fries were also quite good with a little sprinkle of Parmesan cheese to liven things up. 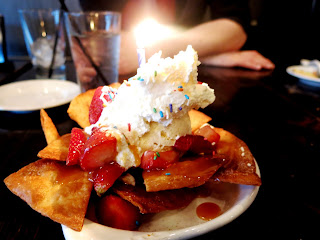 It was only when Brandy tried to order some dessert from the sweet faced and very attentive waitress that the truth finally came out.  "We'd love the Dessert Nachos for the table, dear," Brandy said.  "Is it a special occasion?" the girl asked.  "Someone's birthday," Brandy said with a wink and a grin.  "Then the nachos are on the house!" their server replied, making everyone at the table give a cheer.  The nachos come out with a candle on top, a lovely little surprise that made Brandy smile before she blew it out.  Everyone waited with baited breath for Brandy to say something, which Brandy took as an opportunity to gobble up a good portion of the dessert, which consisted of crispy triangles of fried dough covered in cinnamon and sugar, sliced strawberries, and vanilla ice cream.  Brandy found it to be all rather light and a great mix of textures.

After paying the bill (entrees averaged around $12-$14, but considerable portion size and quality made up for the price) and exchanging a few hugs, the party began to part ways, still as confused as ever as to whether or not they had really just attended a birthday celebration.  It was Bailey who, after Brocco had ridden away on his Cyber Cycle (almost heading straight into the Wrigley Field ice skating rink), finally said, "Happy birthday, Brandy."  "Oh my dear, its not my birthday," Brandy said kindly, "I just said that to get the dessert.  Bye bye now."  But somehow, Bailey didn't quite believe that was true. 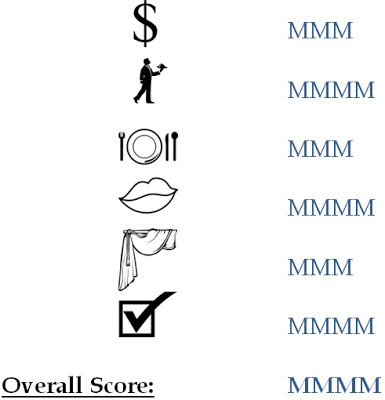