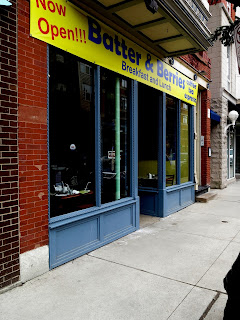 Its surprising how much one can pack into a day sometimes.  Even in her advanced age, Brandy keeps busier than even her doctors advise her to, filling her days with trips to various meetings for societies, clubs, guilds, and even the occasional comity.  So it came as quite a surprise to her when on Tuesday morning she checked her schedule book to find only one listing (she was to meet Bear Buttercup, who was in town, that evening to discuss his actress wife, Bambi's, next career move).  "How can this be?" she wondered, "For goodness' sake!  It's Fat Tuesday and the State of the Union is tonight and..." and then it occurred to her just what a special day it was, "Pancake Day."  She instantly had no other choice but to spend her free time that morning on a little weekday brunch. 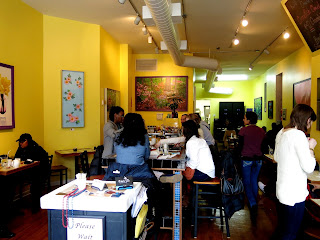 Brandy chose Batter and Berries, a vibrant Creole inspired breakfast/lunch spot in the heart of Lincoln Park.  The restaurant was unexpectedly busy for a week day (Brandy supposed a lot of people had the same idea as she did) but she was taken to a table fairly quickly.  The bright yellow walls were decorated in a colorful if random mix of art and nic-naks, lending a cheerful air to the surroundings.  The place was positively buzzing, but the some what echoy acoustics and closely placed tables made things perhaps a little loud.  Brandy felt comfortable at her little mosaic table regardless, but worried about what it might have been like on a weekend. 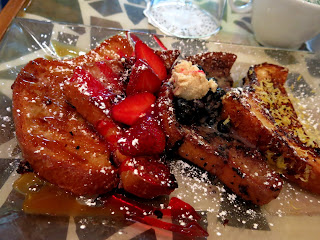 It took a little while finally to get an order in, then another little while to get the food, but everything turned out to be worth the wait.  Brandy started off with a Flight of French Toast (yes, it was Pancake Day, but Brandy has always had a prevalent rebellious streak) boasting four flavors: Lemon, Blueberry, Strawberry, and Caramel.  The toast itself seemed to have been coated in pearl sugar, giving each bite an amazing crunch and chew, almost like a liege waffle.  Brandy found the lemon to be bright without even a hint of sourness. The blueberry was rich in flavor, having been dipped in a specially made batter that actually had pureed blueberries in it.  The strawberry toast was probably the most conventional of the varieties presented.  It was maybe a little on the sweet side for Brandy's liking, but was still very true to the strawberry flavor.  Lastly was the caramel, which was rather decadent and more dessert like. 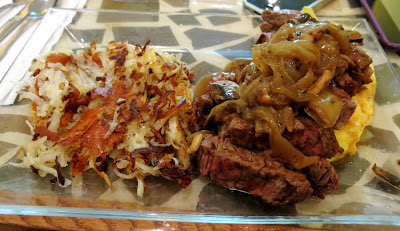 As an entree, Brandy requested the Deconstructed Steak Omelette with a side of homemade hashbrowns, which were certainly one of the best Brandy had every tasted: intensely crispy on the outside, with the interior of the potatoes just a little al dente, Brandy had never encountered hashbrowns that had so clearly been made from scratch.  The omelette consisted of dense eggs (Brandy prefers her omelettes dense.  "I don't want something so fluffy its going to float away.  Brunch should fill you up, after all.  If you leave the table without a satisfied groan, you've done it wrong.") enclosing melted Swiss cheese and topped with sliced steak, onions, mushrooms, and a red wine demi-glaze.  The flavor of the sauce was amazing in its complexity with just a touch of peppery goodness.  The steak was wonderfully tender and cooked to perfection, and the onions and mushrooms just added to the luxury of the meal.  The only thing Brandy was unsure about was the choice to serve the dish on a transparent glass plate, which just seemed a little formal for such a laid back restaurant.

Slowly Brandy extracted herself from her seat with about $30 less in her pocket (most dishes were between $10 and $15, which seemed a little bit much to Brandy, but one can't argue with quality and deliciousness) and a whole free afternoon in front of her.  "Maybe a quick walk around the block to shake off this meal," she thought, "And then, dare I say it, a second brunch!" 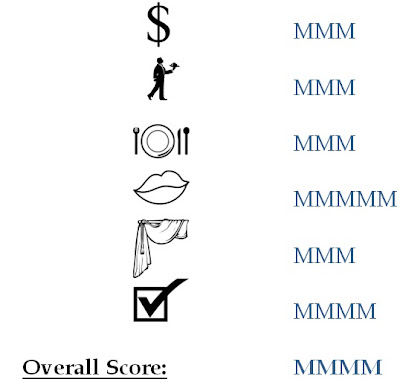