Wood or Smoke and Mirrors 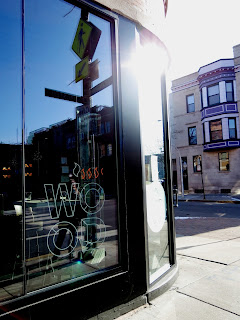 Every year as the craziness of the holidays comes to a close, the world seems to loose its sparkle and magic as it descends into cold, dark winter.  The snow no longer seems mystical, the lights of buildings faded, and the people on the streets seems to become more sullen and isolated.  For Brandy, this has always been her least favorite time of year; a time when the populace seem to forget the good will they had cultivated over the previous month and the baubles all over the city that once glittered seem dull and pointless. 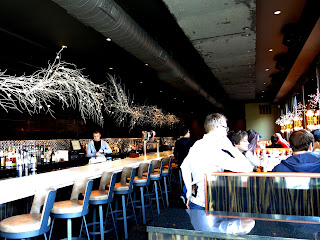 With her prestigious guest, Mama Bee, still in town, Brandy set out to restore a little bit of the holiday magic. She chose Wood, a fairly new cocktail lounge and bistro in the heart of Lakeview.  Brandy had been attracted at first by a glittering wall studded in mosaic mirrors that shone like diamonds ("Or a disco ball," as Mama Bee pointed out), but once the ladies walked inside, they were greeted by the host like they were old friends.  Taking them to a table by the window straight away, the ladies quickly settled into the chic, yet warm and friendly room.  "It's fashionable and glittery, yet welcoming.  Very much a representation of this neighborhood," Brandy observed. 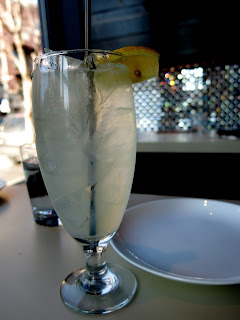 Cocktails were quickly ordered.  For Brandy, a concoction called the French .75, a mix of champagne  lemon, and gin which Brandy found quite refreshing, sort of like a hard lemonade.  Mama Bee picked the Fuzzy Mimosa, a fusion breakfast cocktail, taking the foundation of a traditional mimosa and adding a little touch of peach bitters.  "Seems to be fresh orange juice," Mama Bee observed, "It's a lovely twist, but not so far off that its unrecognizable." 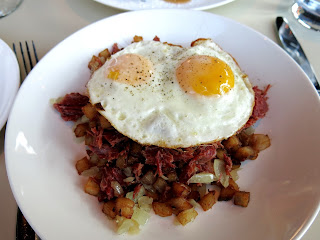 Mama Bee decided to veer away from her famous sweet tooth and ordered a plate of the House Corned Beef.  The dish was hearty, filling, and extremely flavorful, if a tad salty.  The meat was melt-in-the-mouth tender without being too fatty and the eggs on top just added to the richness.  The only disappointment was the side of toast, which seemed to have been done in a wood fired oven; charred, dried, and burnt tasting, the toast was hardly even worth eating.  "I understand that they want to use their restaurant's name sake as much as possible," Mama Bee (honey advocate and owner Honey Bee Bakery), "But simply putting the bread in a regular toaster might not be such a tragedy." 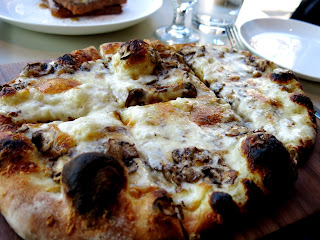 Brandy went for the Autumn Vegetable Flatbread, which was also cooked in the wood fired oven.  In this case, the results were perfect.  The flatbread had a nice toasty flavor from the oven and was crisp and full of texture.  The cheese on top was perfectly melted and savory, but Brandy was disappointed to see that the "autumn vegetables" were simply a few mushrooms.  "You would think some squash, surely, or perhaps a little eggplant," she mused, "It's very good, but they should have just labeled it 'Mushroom Flatbred' as opposed to making one expect something else." 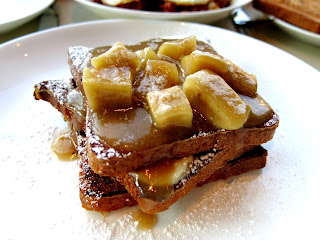 To end the meal on a sweet note, the ladies shared a plate of the Stuffed Apple Cinnamon French Toast.  Once again, a perfectly good dish seemed to have been mis-named, as the toast was more stacked than stuffed, with the filling sandwiched between slices rather than being on the inside of the them.  The French toast itself was really quite perfect in its custardiness,  a flavor sometimes taken for granted in other fancy-fied French toasts. The apples retained a bit of their texture and tartness, the sauce's sweetness was not over powering, and marscapone cheese lent a brilliant bit or richness and creaminess to the plate.

The service at Wood could not have been more friendly ("Flirty even," Mama Bee giggled) and the prices were more than fair ("$5 for brunch cocktails?  That's practically unheard of!" Brandy raved).  So with their hearts a little lighter and their bellies a little fuller, Brandy and Mama Bee set out to transfer a bit of their good mood onto the gloomy winter streets of Chicago. 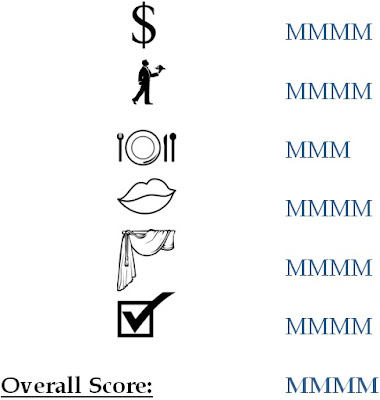