Perennial Virant or Lighten Up!


The Slow and Savory Review 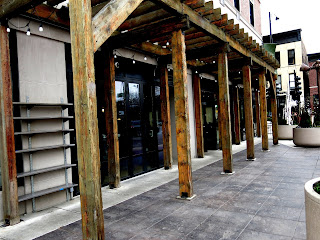 There are times in life when a ball gown is essential.  Debutante balls, royal wedding receptions, ballroom dancing championships, and sometimes extremely formal flower shows are life events where one would be scoffed at and scorned if not decorated in the required amount of gemstones, silks, and/or velvets.  Brandy learned this to her horror on one occasion when she attended a combination piano recital and birthday party for the youngest daughter of the Duke of Basingstoke.  "The girl is turning eight, for goodness' sake, I don't need to wear a floor length gown," she had said, and decided instead upon the more sensible outfit of a tweed knee length skirt and matching jacket.  When she arrived to find every woman in sight dressed to the nines with miles of sparkling fabric trailing behind them, rather than feel under dressed, she simply laughed in their faces, turned on her heal, and left the party (passing the butler her phone number on the way out). 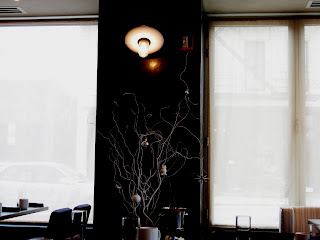 Needless to say, Brandy has never had the patience for needless formality, which perhaps is why she has always favored taking her most honored guests and friends out for brunch instead of dinner.  "Dinner at some of the finer restaurants in this world can become too much about the rituals of dressing up, showing up, and showing off.  No one does that for brunch.  You put on the first thing you see in your closet because its too damn early to be picky, and then its out the door and on with the meal," as she puts it.  So when one of her most prestigious guests, Mama Bee, owner and operator of Honey Bee Bakery, came to town, Brandy didn't think much about picking the normally decorous Perrenial Virant in Lincoln Park.  "What's the dress code?" Mama Bee asked.  "Dress code?  Well, if it was dinner, maybe a little more formal, but this is brunch for goodness sake! Wear whatever you like." 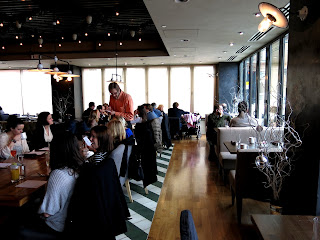 Perrenial Virant's sunny dining room wasn't nearly full, but still Brandy was glad she had made a reservation after the suspicious look the hostess gave her when she and Mama Bee entered the restaurant.  Glancing around quickly, Brandy noticed the staff were dressed quite informally ("Thank goodness," she sighed audibly) in jeans and button down shirts, and although the interior had been decorated appropriately for the holidays, there was still a certain stiffness in the air. 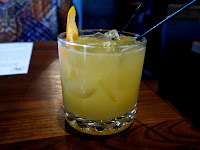 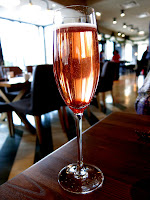 Seated straight away, the ladies ordered a pair of cocktails: a Strawberry Mimosa for Mama Bee and a concoction called The Flying Nunn for Brandy.  The mimosa was one of the most well balanced Brandy had ever come in contact with, being made of a clearly high quality champagne  it wasn't overly sweet or acidic.  The Flying Nunn was a mix of peach schnapps, ginger beer, cognac, and orange and made for a rather uniquely fruity drink that fitted in perfectly with the hour of the day, a feat that isn't always met by other supposedly breakfast cocktails. 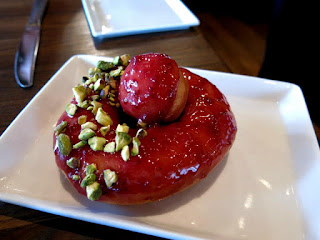 To start off the meal, Mama Bee and Brandy decided to split one of the Housemade Doughnuts, a round of fried yeasty dough covered in raspberry glaze and chopped pistachios.  The glaze was bright and fruity, a nice contrast to the richness of the doughnut itself, and the nuts made for a brilliant bit of crunch.  In fact the only disappointment was the long, dark hair attached to the top of the pastry, which certainly did not belong to Brandy, Mama Bee, or their short haired waiter. 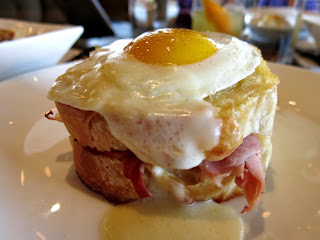 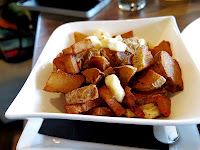 Entrees came out lightening quick.  Mama Bee had chosen the Croque Madame with a side of Home Fries and Cheese Curds.  The bread of the Croque Madame was nicely supple and perfectly toasted, the ham tender and flavorful, and the whole thing set off with a subtle sweetness from some maple syrup flavored sauce.  "I would have gone with honey, of course, but this is quite good too," Mama Bee remarked.  The home fries were wonderfully crisp, but combined with the un-melted cheese curds, the dish seemed rather dry.  "No wonder the Canadians pour gravy over this," Brandy mused. 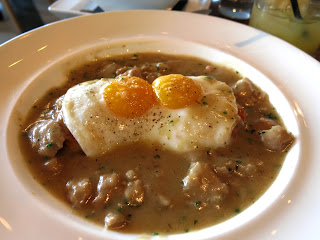 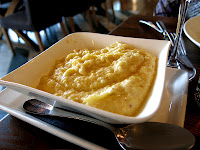 Speaking of gravy, Brandy had been given quite a lot of it with her Biscuits and Gravy, along with a side of Cheesy Grits.  Brandy found the biscuits to be rather crunchy, if slightly salty, and the gravy to be surprisingly light.  The eggs that topped off the dish were also cooked perfectly, and the large chunks of seemingly case-less sausage made the dish nicely filing.  Brandy quite adored her grits, which seemed to have been made with some sort of smoked Gouda  rather than the more traditional cheddar.  Their texture was amazingly smooth, creamy, and for having paid $5 for the bowl, the portion size was appropriately sized.

Though it was hard to imagine better food, the choreographed and stiffly formal service and atmosphere put Brandy off.  "It's just brunch, for goodness sake!  It's not like they're serving truffles and caviar!" she growled as they packed up, "If those poor servers were just told they could have a bit of fun and if the decor could have had a bit more life in it, that might have been one of the loveliest brunches of my life." 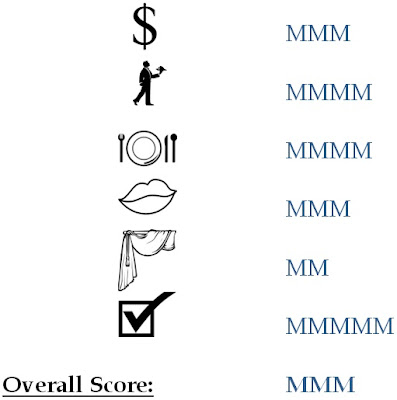