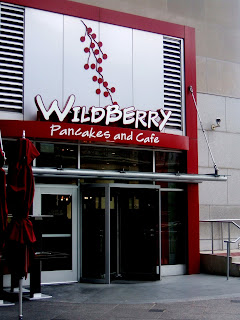 It was a long night at the monthly meeting of the Elderly British Ladies of Chicago Society (or EBLCS, pronounced "Eblecks," for short).  It had been Brandy's turn to host, which meant it was her duty to provide the bottle of port and wake the other members when the meeting was over.  Unfortunately for Brandy, this meeting turned out to be particularly spirited when the ladies got into a rather heated discussion about brands of American tea.  "You're completely barmy, lass.  That tea tastes like water from Loch Ness!"  "Don't you get sarcy with me, you old cow!  You might as well suck on a damp cleaning rag rather than drink that tea of yours!" And so went the insults, flying back and forth until well into the early hours of the morning.

When at least Brandy had escorted the last of her fellow EBLCS out of her home, she found that she didn't have enough time to sleep before attending Chicago Society of Eldery British Ladies meeting (Brandy had to keep her association with CSEBL, or "Cybil" a secret from the EBLCS, as the two groups were essentially mortal enemies).  Knowing she could not show up to the CSEBL meeting half asleep without giving up her secret, Brandy decided to seek out a good brunch instead of taking a nap. 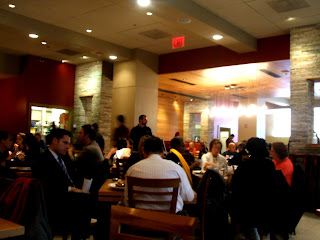 She eventually settled on Wildberry Pancakes and Cafe in the heart of the Loop.  Greeted at a huge host station, Brandy was whisked away to a table off in the corner of the large, modern looking space.  Lots of wood tones with pops of red made the room bright and cheerful, while still feeling a little chic.  Spying a huge mug of coffee at the table beside her, Brandy immediately put in an order for a Coconut Mocha with her friendly waitress while she looked over her menu. 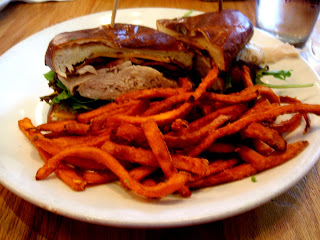 Having placed her order for food a bit after that, Brandy was shocked when the plates arrived only five minutes later.  Her entree was a Cranberry Turkey Sandwich with Sweet Potato Fries.  The first bite of the sandwich was quite a surprise as the pretzel bun on which the sandwich had been made was soft and warm, while the slices of turkey were cold.  Brandy loved this contrast in temperature.  The bacon on the sandwich was nicely crunchy, though rather flavorless, as was the cranberry mayo, but Brandy still rather liked the sandwich.  The fries were perfectly crisp and sweet, but hardly piping hot, which Brandy found odd.  After finishing the first half of her sandwich, Brandy began glancing around the room, looking for her waitress, as her coffee had still not arrived and her eyes were beginning to droop. 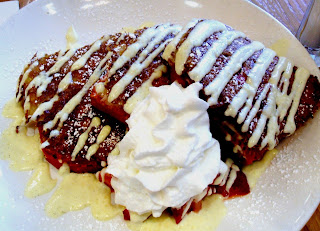 After finishing off the sandwich, there was still no sign of the coffee, so to stay awake, Brandy plunged in to her dessert, Red Velvet French Toast.  Though the gigantic plate looked very appealing, Brandy once again found her dish lacking in flavor.  The slices of Red Velvet tasted more like pound cake, not having the signature tang of the aforementioned Southern specialty.  The toast had been stuffed with a soft of cream cheese filling, which did make for a nice rich indulgence, and slices of strawberries helped to break up the richness of the dish.  Just after finishing her first slice of French toast, Brandy finally tapped the waitress for her missing coffee (Brandy was more than a little annoyed at this point, not only because she could barely stay awake any more, but also because the bill had already been delivered, counting the absentee coffee as part of the total).  The waitress apologized profusely and offered to have the drink made again, but did not take it off the bill. 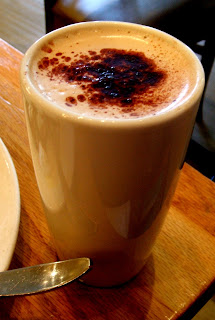 When the drink did finally arrive in a gigantic mug, Brandy was over joyed.  Sadly, the beverage was less than tasty.  What was supposed to have been a Coconut Mocha, tasted neither of coconut nor of coffee, but rather watered down hot chocolate.  Still, knowing she was being charged $4 for this drink, Brandy powered her way through it, picking at the French toast in hopes that her waitress would present herself so that Brandy could ask for a box.

When the waitress did not come back, Brandy, bleary eyed, prepared to leave.  Just as she had put on her coat and stood up from the table, the waitress appeared, offering to box up the rest of her meal.  Brandy plunked herself down again and waited while the nice woman readied her take away box and tried to resist the urge to lay down on the banquette.

Having finally left Wildberry with her wallet significantly lighter (the bill came out to about $30 after tax and tip, which Brandy didn't quite feel matched the quality of the meal) and her body significantly less caffeinated than she had hoped, Brandy managed to make it through the CSEBL meeting with her exhaustion unnoticed by anyone, that is except for the policeman who had to rouse her from the bus stop bench on which she fell asleep while waiting for her ride home. 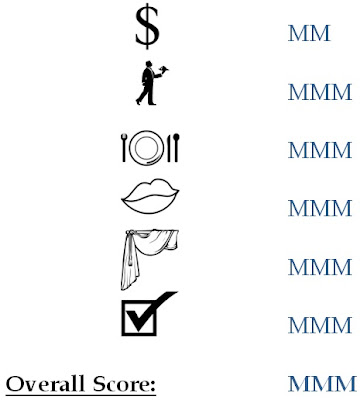