Jam or Egg Whites are the New Black 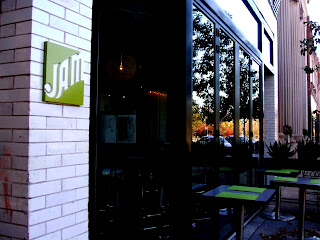 Ah yes, autumn.  The extraordinary season when the world fills with jewel toned colors and the wind takes on a special kind of crispness.  This is, perhaps, Brandy's favorite time of year, if not for the changing of the leaves, but for the changing of the menus.  "The arbitrary addition of pumpkin to anything and everything is one of the greatest joys of the year for me," she often says.  Fall also seems to be a time for things like pork roasts, nutty mushrooms, rich risottos, and tea.  Blessed tea.  During the months of October and November, Brandy is usually to be found wiling away the mornings sipping on a good cuppa, whether its from a porcelain cup in her breakfast nook or from a tartan thermos on a park bench.

The desire for a little tea drove Brandy into the chic looking Jam in Logan Square one brisk morning.  One look at the clean white interior with pops of lime green was enough to heighten her senses and her expectations.  The friendly hostess took her straight to a table by the large front window, so that she could gaze out upon the beautiful color changing trees outside.  After a little bit of a wait (the hostess came to apologize before her temper even had a chance to flare, indeed, Brandy had barely noticed any lack of attention) Brandy ordered a pot of Gun Powder Green Tea, which came straight away, smartly served without cream or sugar, as green tea should be, but Brandy wouldn't have minded a bit of honey. 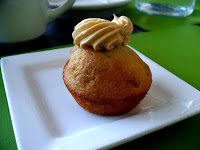 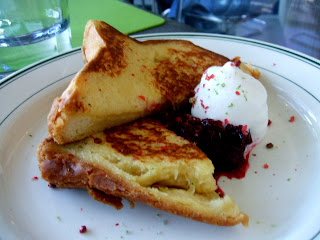 To start, Brandy put in for a half order of Malted Custard French Toast.  The toast itself was quite well done, with an extremely creamy center, but what really made the dish were its toppings.  Served with macerated cherries and a lime whipped cream, then topped with cracked pink peppercorns, this was truly the most unique French toast Brandy had ever had.  The cherries were delightfully tart, which blended nicely with the key lime like cream, and the peppercorns added an unexpected burst of floral herbiness and spice. 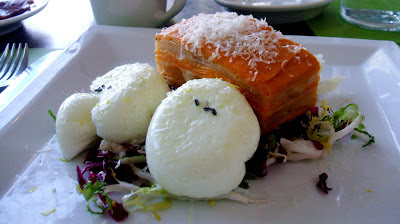 For her entree, Brandy had eyed up something called Guisado Verde, but was informed that the dish had already sold out for the day, so instead she ordered a plate simply entitled Egg Whites and a side of bacon.  The dish was so beautifully plated that Brandy almost gasped when it was set before her.  A pave of root vegetables proved to be very tasty indeed with alternating slices of creamy and crisp tubers and the sweet and sour red cabbage on which it sat was pleasantly tantalizing.  The egg whites however, the title role in the dish, were rather disappointing.  Though their texture was perfect, their flavor was totally absent, save for a few unevenly seasoned bites (the plate had been sprinkled with what appeared to be smoked sea salt).  Brandy felt that she really could have done without them altogether and would have been happy with just the veggies.  The side of bacon was quite greasy and more of a ham steak than a traditional slice of bacon, but Brandy quite enjoyed its intense meaty flavor. 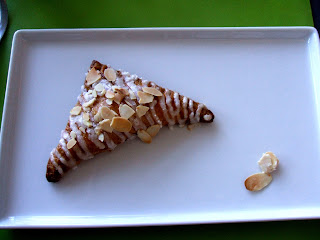 To finish off her last cup of tea with, Brandy ordered a Blueberry Almond Turnover.  The pastry took quite a while to arrive, but this was explained as soon as it was set down in front of her.  "Fresh from the over," the kindly hostess said, and Brandy could tell it was true from the enticingly warm aroma.  The pastry wasn't quite as flaky as Brandy had expected, though it was rather doughy and moist.  The toasted almonds on top lent a nice crunch, while the fresh blueberries in the middle was wonderfully bright without being too sweet.

All in all, Brandy certainly wouldn't have minded ordering a little more tea to sit and sip upon, but didn't wish to take up a table and deprive someone else of tasting such extraordinary food in such a peaceful environment.  Though a tad on the pricey side considering the portion size, Brandy thought the quality of the meal to be a good match for what was paid (the bill came to exactly $30 before tax and tip).  And so, Brandy bundled up once more and headed out to find a park bench upon which to sit and continue sipping on her tea until the cocktail hour called. 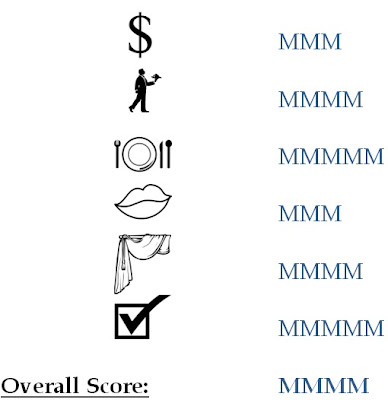