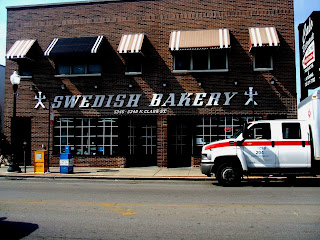 Sugar.  That sparkling, crystallized, bastard of a sweetener.  It has absolutely no health benefits to speak of other than building fat to keep us warm for the winter.  And yet, something deep inside of us all craves it, needs it, will stop at nothing to get it.  What an awful trick of nature.  And yet, not many people would be willing to part with their sweet teeth.  Especially not Brandy, as she would be left entirely toothless (in fact, she had been toothless for a period in 1947 after winning a "How Much Cola Can You Drink?" contest, but luckily part of her winnings was free dental care for life). 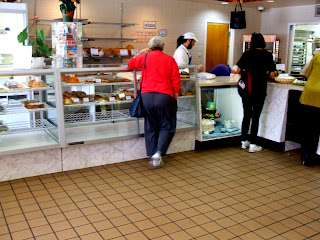 It was a crisp fall morning that Brandy found herself wandering about Andersonville when a sudden craving for sweets over took her.  Looking around, Brandy eyed a large building with Swedish Bakery written on it. "Perfect," she thought to herself, "No one does sweets better than the Swedes."

A second after stepping foot into the bakery, Brandy felt quite overwhelmed.  Breads, cakes, pastries, truffles, all beckoning her from behind clean and bright glass bakery cases.  Eager faces peered at her from behind the counters, awaiting her order, but Brandy just walked from case to case, her mouth watering continually.  "There's complimentary coffee to enjoy while you look, dear," said one of the lovely people.  Brandy nodded, looking towards the coffee station, which was set up near a sunny window.  "Do you need some help, deary?" a nice woman asked.  Brandy nodded once more, managing to choke out, "Something for breakfast."  The woman smiled at her and said, "Come this way.  We'll chat." 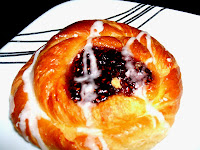 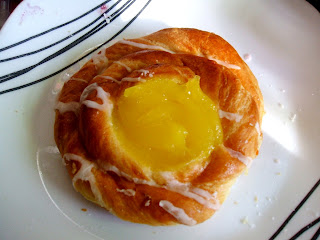 At once Brandy was presented a dazzling array of treats like Cinnamon Apple Bread and Orange Cream Bundt Cake, but it was the sweet rolls and pastries that really caught her eye.  In a flash Brandy was presented with a beautiful box of assorted Danishes and a bag containing two of the woman's personal favorites, a Poppy Seed Cruller and an Almond Horn.  While Brandy watched as the woman delicately tied the box up with a bit of string, she helped herself to a few generous samples that had been left on the counter.  "Make sure you try the Cinnamon Roll," the woman told her, "They're even better warmed up."  "Aren't we all?" Brandy responded through a mouthful of pumpkin bread. 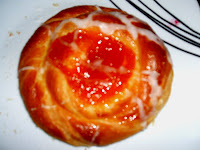 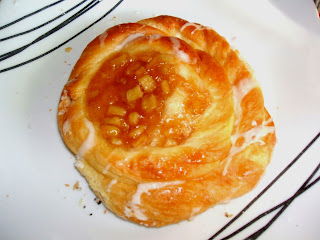 Once home and with a cup of coffee in front of her, Brandy finally indulged her sweet tooth.  First, she sampled the Danishes, which came in Lemon, Raspberry, Apple, Strawberry, Blueberry, and Apricot.  Brandy very much enjoyed the blueberry, which had a thick and rich jam, and the apricot, which was very bright and flavorful.  The raspberry was also quite good with a nice fresh taste to it, and the lemon was quite creamy and delicate.  Her least favorite were probably the strawberry, which didn't taste much like anything, and the apple, which was also lacking in a little flavor.  The pastry on all of the Danishes was moist and buttery with just the perfect amount of sweetness from the little drizzle of icing. 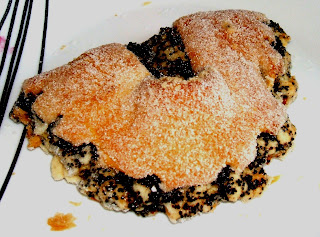 The Poppy Seed Cruller was very interesting indeed.  The pastry it self was rather light and crumbly, and the poppy seed mixture was very very sweet and subtle.  Brandy found it perfect for dunking into her coffee. 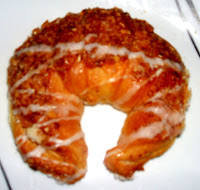 Lastly, the Almond Horn, which was a sort of croissant, but filled with a very delicious almond paste.  This was certainly meant for satisfying sweet teeth, but also provided a nice mix of textures with the crunchy nuts on top and the flakiness of the croissant.

With her insatiable need for sugar now satisfied thanks to Swedish Bakery and with a little money still left in her pockets (the entire assortment only came out to about $15) Brandy took a short nap before venturing out once again, this time in search of something to satisfy not her sweet tooth, but to stop the odd tremors she gets when she's gone more than 12 hours without a cocktail. 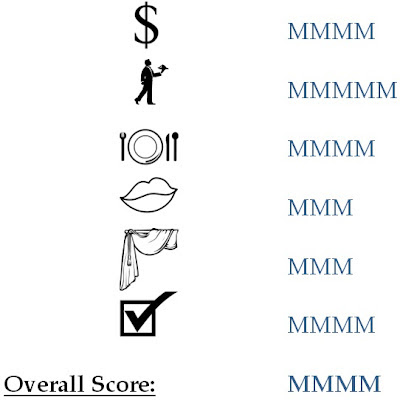