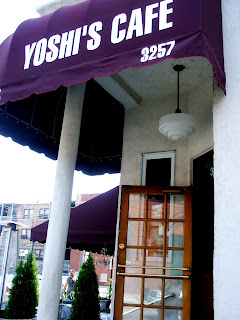 It's sometimes hard to keep the attention of someone as well traveled as Brandy.  Great Wall of China?  Seen it.  Leaning Tower of Pisa?  Been there.  Big Ben?  Heard it.  Grand Canyon? Done that.  But for some reason, Brandy has always had a special fascination with the Far East, which is probably why she was rendered into fits of jealousy when she found out about Bunny's interview last week with the delightful Chef Takashi Yagihashi.  "I have a closet full of kimonos!" she was heard to exclaim, "I drink sake by the gallon!  I've even won an international title for speed rolling sushi!  But she's the one who interviews Chef Takashi?" 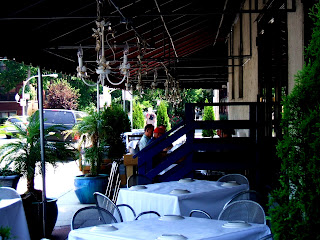 In order to prove her superiority in all things Japanese, Brandy, along with Biscuit and Birdie Brown, headed to Yoshi's Cafe, a posh Japanese/French fusion spot in the heart of Lakeview.  Brandy had always been an admirer of the summer porch, with its miniature chandeliers and roaring fire feature, but with the weather veering towards 100 degrees, the inside seemed a more favorable spot.  The interior was very clean, bright, and elegant, though a little cramped.  A large bar dominated the center of the room with white linen clad tables surrounding it, and what seemed to be a private room at the back, blocked off by a sliding paper door. 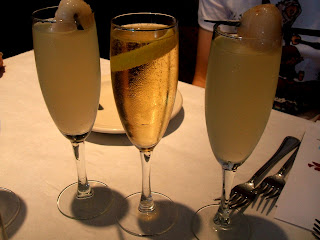 Upon sitting down, the group were presented with a basket of freshly baked croissants, marmalade, and whipped butter.  Birdie wasted no time in diving for the marmalade, while the ladies listened to their adorably attentive waiter explain the specials.  As mimosas were half priced, a round was ordered, with Brandy and Birdie choosing the lychee flavored variety, while Biscuit sided with the plum wine mimosa.  Both types seemed traditional at the start, but the lychee one proved to be more light and sweet, while the plum wine was a bit more acidic.  Brandy especially liked the skewered lychee nut that had been balanced over her glass.  "It almost looks like a scallop, its so huge!" she remarked. 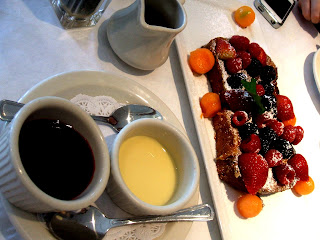 To start off with, the table split an order of French Toast, made with house baked brioche and served with fresh fruit, creme anglaise, berry sauce, and maple syrup.  The toast was so soft and warm that it seemed to melt on the tongue, and everyone agreed that the combination of the rich creme, bright berry sauce, and fresh fruit really made this seemingly simply dish a standout. 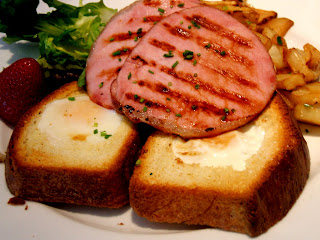 For her entree, Biscuit chose the Baked Egg in Brioche.  Though she found the eggs cooked a little inconsistently ("This egg is runny as a grey hound after a weasel, but this one's like a bloodhound sitting on a porch," she said, gesturing to each egg in turn) Biscuit had only good things to say about the buttery and tender bread.  Her side potatoes too were fairly pleasant, though nothing special. 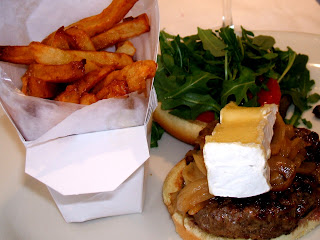 Brandy had chosen the substantial Wagyu Beef Burger with Truffle Fries.  Rather sweetly, the fries were actually "truffled" tableside by the waiter, who poured just a little touch of truffle oil over them.  The fries were actually quite crisp and fragrant, though Brandy would have loved some means of transporting the truffle all the way down to the bottom of the paper container that held them.  The burger itself was so thick and juicy that Brandy could barely get her mouth around it, and after a few bites, the bun ceased to be a viable means of fluid free transport.  Brandy very much enjoyed the peppery arugula, caramelized onions, and wedge of brie that came atop the burger, though she thought the four pots of sauce (horseradish, mustard, ketchup, and BBQ) that came on the side were a bit over kill, especially for such high quality beef. 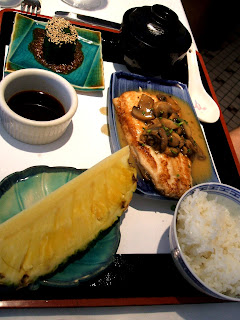 Brandy had been so enraptured by the burger that she completely missed the Japanese Style Breakfast, one just like Chef Takashi had described to Bunny.  Fortunately, Birdie didn't miss it.  The filling array of food was thus: a large wedge of pineapple, a bowl of miso soup, spinach cooked with sesame seeds, white rice, and a fish of the day, which happened to be cod in a mushroom ginger sauce.  The fish was beautifully cooked, being tender and flaky, with the mushroom sauce helping to combine the animal of the sea with the earth.  The soup was warm and filling, the spinach salty and sweet, and the pineapple was nicely cut along the rind for easy eating.  "Reminds me of when I was stationed in Osaka," Birdie mused, "There were these lovely women who worked at our base and they used to bring us plates like this every morning."  "That was a hotel, dear," Biscuit corrected him. 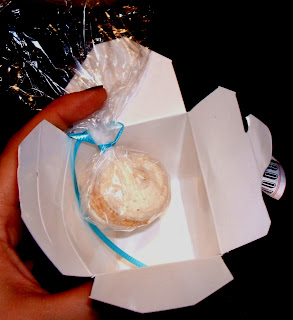 Though a rather pricey brunch (most entrees ranging between $13-$18, but the mimosas were half priced), Brandy thought their little excursion to the Far East was well worth it.  Being so full after their entrees, the party couldn't even be enticed into dessert when shown all the sweets on offer by their very tempting server.  Gladly though, as they walked out the door, they were each handed a little carry out box by the hostess, which contained an almond flavored French macaroon, making for an especially lovely ending to a very special meal. 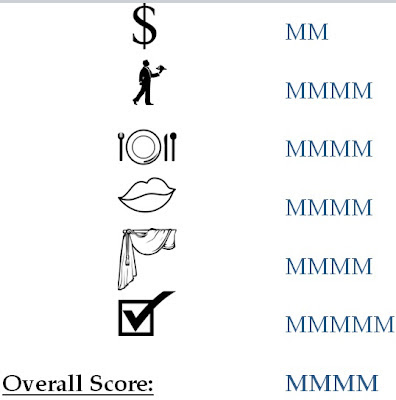