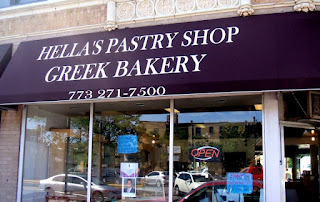 It's a very sad thing that in this hustle and bustle world of ours, there is sometimes just not enough hours in the day to truly enjoy life as it should be enjoyed.  Brandy, who while well versed in smelling the roses, is not always immune to this tragedy either.  But while others often choose to sacrifice (gasp!) breakfast in favor of expediency, this is one thing Brandy refuses to ever do.  So even when her schedule is full to the brim (such as it was this week, having been invited to judge an egg poaching competition, as well as serving as a free lance consultant for a start up coffee company, and helping a gourmet butcher to flavor his signature bacon, not to mention all the preparation for the Queen's special Diamond Jubilee Super Secret Mimosa Reception) she stoutly refuses to miss the most important meal of the day, no matter what the cost. 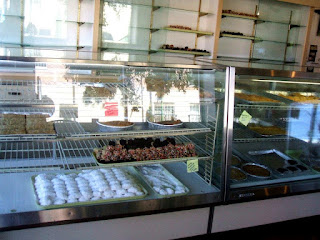 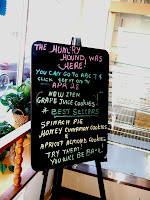 Being in need of rather quick bite, but refusing to compromise her very high standards, Brandy headed to Hellas Pastry Shop in Ravenswood, a sweet little bakery with a heavy dollop of Grecian goodness.  Though not as flashy on the inside as some of other Chicago bakeries, a feeling of warmth all but emanates out of the clear glass cases where all of the baked good are kept.  A smiling lady greeted Brandy right away and tried her best to keep up as Brandy walked from case to case and rattled off her order.  She even handed Brandy a free cookie, saying, "This one's for you, honey."  "Well, its all for me, but thank you!" Brandy smiled. 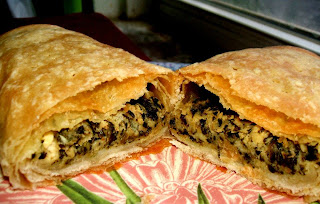 The first of Brandy's choices was a Spinach Pie, a sort of more Italian twist on the traditional Greek Spanakopita with mozzarella and ricotta replacing feta cheese.  Brandy very much enjoyed this recipe, as the milder cheeses took away the bitter bite that feta can sometimes bring to that particular dish.  The pastry crust was very light a flaky with just a little bit of chew to it.  Brandy suspected this was most likely hand made phyllo dough, a rare find in this day and age, as it is traditionally very complicated to make and get right. 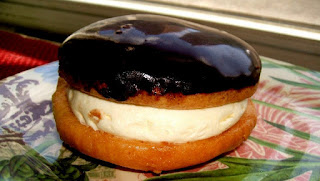 Next was a nameless pastry which Brandy was told was "like an eclair."  She actually found it to be a delicious mix between an eclair, a Boston cream donut, and a whoopie pie.  The pastry was topped with a thin but rich chocolate glaze that very much reminded Brandy of an eclair, but the pastry itself was more cake like, being soft and moist, and also soaked in some sort of syrup.  The cream in the middle was not like a traditional pastry cream, but more along the lines of a thick whipped cream or a marshmallow fluff.  It was so rich and decedent that Brandy could only eat half of it at a time. 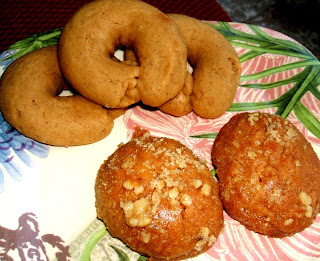 For her tea, Brandy nabbed some of Hella's signature Honey Cookies, a take on a traditional Greek cookie called Fenikia.  The texture was soft and crumbly, like a pecan sandie, but with the cookies having been soaked in honey, there was a certain moistness to them.  The sweetness was surprisingly not over powering, and the little dusting of crumbled nuts on top (Brandy guessed that these were almonds, but couldn't quite tell) was the perfect touch.

Brandy also grabbed a bag of Grape Juice Cookies, another twisted Greek recipe called Moustokouloura which is traditionally made with wine must (a sort of grape nectar that is created during the first step in the wine making process).  Though they didn't much taste like grape, these cookies were like a more subtle version of gingerbread.  The most present flavor was a subtle cinnamon, brought to the front by molasses, and the texture was quite soft and doughy.

Brandy was very glad to have these little treats to get her through such a busy weekend, and with unparalleled kindness from the shop keepers, on top of reasonable prices (around $25 for 2 spinach pies, 2 pastries, 6 honey cookies, and a dozen grape juice cookies) Brandy is more than likely to be returning for a less rushed experience.
The Short and Sweet Review 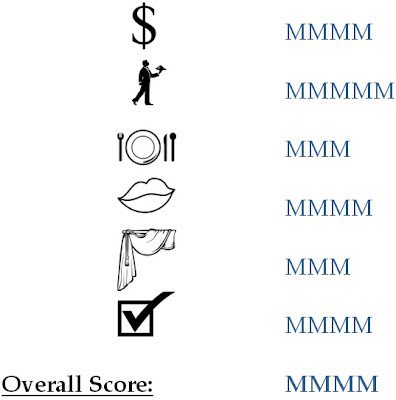