Waffles or Nooks and Grannies 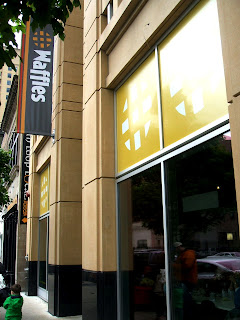 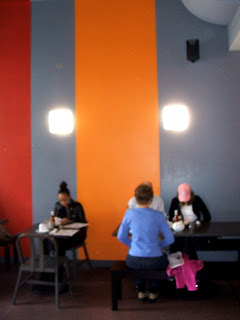 Some may not realize the amount of passionate debate something like breakfast can initiate.  Sweet or savory?  Mimosa or Bloody Mary?  Fruit cup or potatoes?  Even if the debate is with one's self, it can still get pretty heated.  But there is one debate, perhaps more than any other, that can drive people to acts of war: Waffles.  This debate used to be restricted to the streets of Europe, but with recent demands by the American public for more authentic experiences in their food, it has crossed the seas and oceans to reach our shores.  No, we don't mean waffles vs. pancakes, or even what to top a waffle with.    What's the big deal about waffles you ask?  It is this: Brussels vs. Liege.  Crispy or chewy?  Meal or snack?  Sickly sweet or slightly bready? 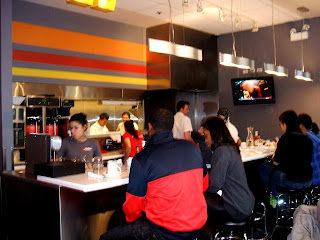 This problem has been confounded by a newish breakfast spot in Chicago's South Loop simply called Waffles, where not only do they offer both Brussels and Liege waffles, but also sweet and savory options, making the choice all that more difficult. Brandy invited along her old pal Bailey Blue, who, along with her brother Hawke, has started a blog of her own, concentrating on reviewing the deliciousness of hard cider. The space that holds Waffles is quite extraordinary, with extremely high ceilings and dining areas squished into every corner. The walls are painted a very industrial grey, but patches of bright orange and yellow seem to liven the place up. As a cheerful girl lead them to their table, Brandy took note of the orange juice machine (loaded with fresh oranges, ready to be squeezed) and the stools at the bar, that enabled diners to watch as their food was prepared. 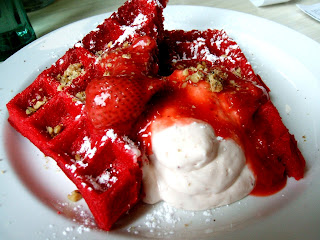 The party began by sharing one of the specialty waffles, the Red Velvet. Coming to the table, the dish certainly did look impressive, with its bright red hue and mound of whipped cream cheese. "Dessert as breakfast, what could be better?" Bailey beamed. But sadly, the waffle did not deliver that hard-to-get-right taste central to a red velvet cake. "You always have to look for a slight tanginess that comes from the vinegar," Brandy instructed them. Though the waffle had a lovely texture, being crunchy on the outside and chewy on the inside, Brandy suggested they might take the red food dye out of the equation and bill this dish as a Strawberry Cheesecake Waffle instead, as the strawberry compote on top was the most forward flavor in the dish. 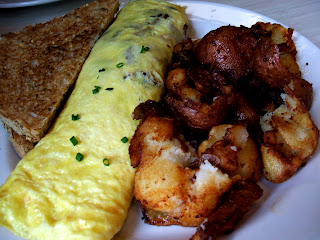 Hawke chose a custom omelet for his entree, stuffed with sausage, mushroom, and cheddar.  Though a generous size, the omelet was pretty standard with the eggs being nicely thin and the stuffing full to the brim.  The potatoes on the other hand turned out to be a pleasant surprise.  "These must be reds," Hawke (a known authority on produce) mused, pushing one with his fork, "They have a brilliant creamy interior, but they've also got a nice crunch on the outside.  And the seasoning is spot on." 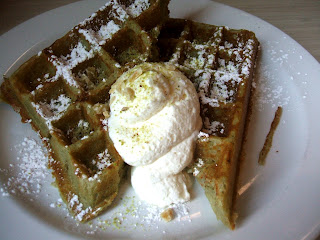 Bailey went for one of the other waffle confections, a Green Tea Waffle.  While having the same texture as the Red Velvet, the Green Tea flavor was more present, though subtle.  Although the menu had mentioned a second flavor of lemon, Bailey couldn't really detect it. 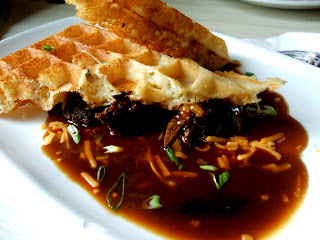 Brandy went a more savory route, selecting the Cheddar and Short Rib Waffle.  This waffle's texture was the same as the others, but this time it had shredded cheddar mixed into the batter, which made it almost taste like a biscuit.  The meat under neither the waffle was very tender and flavored with a sort of salty sauce that was very pleasant. 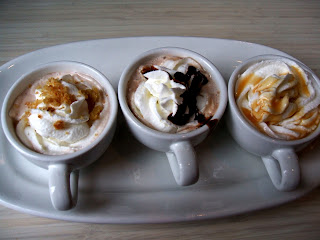 Finishing up, the trio sampled a Hot Chocolate Flight, which the waitress had suggested was better as a dessert than a beverage to enjoy with a meal.  The flight consisted of three flavors: Dark Chocolate, Caramel, and Peppermint.  The peppermint was probably their least favorite of the bunch, having an odd artificial taste and being weirdly topped with peanut butter cookie crumbs.  In the middle was the Dark Chocolate, which while lovely, was pretty much standard hot chocolate (hot being the operative word, as the whipped cream on top had rendered the drink tepid).  The best was the caramel, which had a slightly salty taste, though most of the flavor seemed to be in the topping.

The great waffle debate may not have been solved that day, but at least Brandy had found a place where a productive discourse could be conducted in future.  The service was friendly enough, though the table did seem to be forgotten when it came time for the hot chocolate, and the prices seemed a tad steep ($20 for an entree and hot chocolate flight alone), but the unusual choices will keep Brandy returning to sample every waffle on the menu until the Brussels vs. Liege debate is finally resolved. 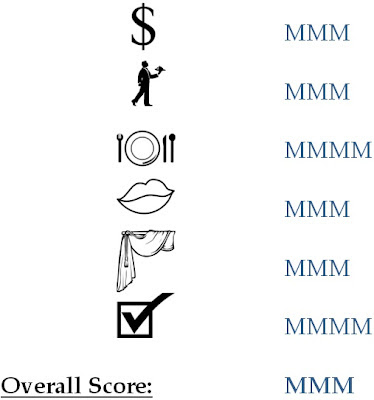