Milk and Honey Cafe or Pay it Before-ward 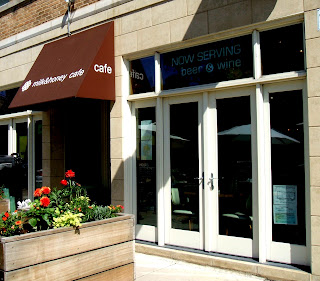 Having grown up in a sleepy sea-side British village, Brandy never has been one for the hustle and bustle of American living, especially big city living like in Chicago.  To most people rushing to and fro, Brandy may seem to be moving in slow motion, wandering her way down a side walk, smelling flowers, petting dogs, or simply stopping to take in the smell of cooking food from a sidewalk bistro.  And perhaps, in Brandy's opinion, those people are missing out on the simpler things in life.

It was during one of her strolls on a sunny spring day that Brandy came across Milk and Honey Cafe in Wicker Park.  The beautiful sidewalk seating caught her attention first, and the line of people waiting inside the door (on a weekday morning no less) made her curious.  Joining the line, she realized what was going on: in this particular place, it seemed that one orders at a counter first, pays, then gets seated and presented with food.  At first, this made Brandy a little miffed.  "They're rushing it!" she thought, "If they're rushing brunch, what point is there in the rest of the day?"  Regardless of her irritation, she placed an order with a cheerful, yet slightly frazzled looking young lady, paid, picked up some silverware, and seated herself. 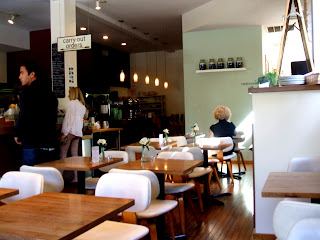 The interior of the place was sunny and warm, with happy, muted colors, and tiny touches to make it feel clean and comfortable.  The spacing of the tables was good, but Brandy could see in her mind's eye how packed it might get on weekends. 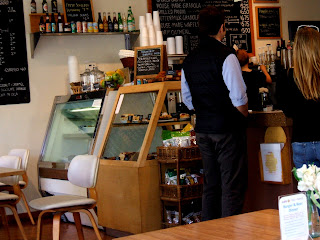 First to the table was her Chai Tea Latte.  Oddly, the biggest size available came in a to-go cup (which after all might have been for convenience's sake so that patrons wishing to take the rest of their drink with them after they finish their meal aren't forced to ask the busy worker's for a cup).  Brandy found the drink to be sweet and thick with not too much spice. 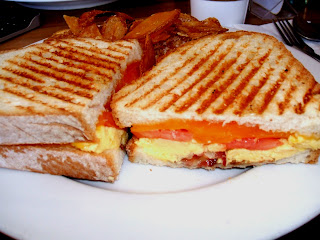 To start with, Brandy dined on the Grilled Panini, a sandwich filled with scrambled eggs, bacon, cheese, an tomato.  The eggs were light and fluffy, the cheese melty, and the bacon smokey, though Brandy wished it had been a it more crisp.  A large slice of tomato turned out to be the most disappointing part, as it was incredibly watery and flavorless.  "This needs a nice juicy beefsteak, or some heirloom variety," Brandy thought to herself as she pulled the offending vegetable from her sandwich.  The potato chips served on the side, which were topped with flaked salt, seemed to have been made in house and had a lovely crunch. 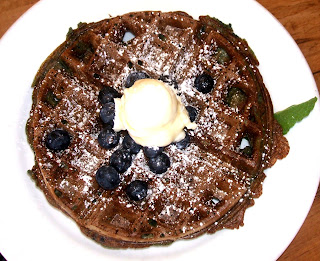 To finish up, Brandy sampled the Waffle of the Day, Blueberry and Cinnamon.  The molasses colored outside of the waffle implied the spice, while the oddly, yet whimsically bluish inside showed berries scattered throughout the batter, and the whole thing was topped with some fresh berries and a portion of butter as big as a scoop of ice cream.  Brandy found the outside of the waffle to be lovely and crisp, while the outside was soft and flavorful.  Although the blueberry flavor was more than present, the cinnamon was a bit more difficult to detect.  Brandy especially liked the fact that there seemed to be a fresh blueberry for every bite, though she was a bit sad that the waffle seemed to go a bit soggy towards the end (and that is with a minimal amount of syrup).

Although Milk and Honey Cafe's practice of "Pay First, Eat After" at first seemed odd to Brandy, in the end she rather liked the fact that there wasn't any waiter hovering near her, waiting to give her a check (or the reverse, a waiter who seemed to have disappeared).  And so, full of a rather hearty breakfast, which at a cost of just about $20 all said and done put things on the upper side of average, Brandy one again wandered off down the road in search of roses to smell. 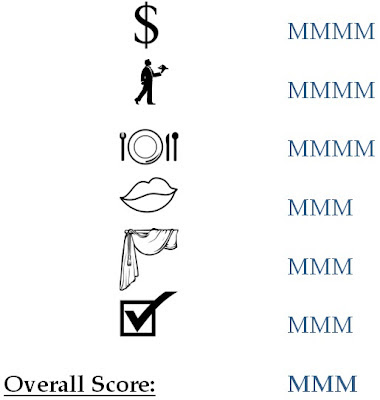 Posted by Bunny and Brandy at 9:54 AM