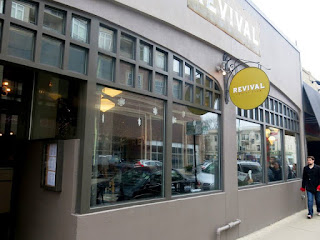 At the end of 2014, Brandy was flooded with nostalgia when she visited the newly opened Revival Social Club, which was located in the same space that was once occupied by M Henrietta, otherwise known as Bunny and Brandy's very first brunch review destination. "There was just something so heartwarming about seeing that space cared for and loved by a whole new crowd," Brandy wistfully recalled. But having learned recently that Revival Social Club had acquired new chefs, a revamped menu, and a whole new bar program, she knew she had to go back to see how the old place was doing. "I feel a duty to that space, to make sure it is always home to a worthy brunch. I would take it as a personal insult if I ever heard ill being spoken of the brunch in that little spot next to the Granville Redline stop!" 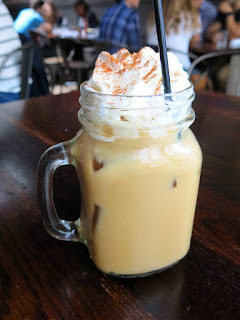 Sunday morning brunch was still buzzing, which Brandy was happy to see. Glancing at the menus, she noticed that the once experimental bar menu had become more approachable, while the food menu, which used to concentrate on Southern American themed cuisine, had shifted more to home style Mexican American. Still, there was some holdovers from the previous incarnation, like the unforgettable skillet monkey bread.

Brandy started off her meal an iced Mexican Coffee, which had been spiked with Ancho Reyes liqueur and topped with a tequila whipped cream. "Oh, this is dangerous!" she said after taking a sip. The iced coffee was so smooth and the liqueur's flavor so subtle that she could have easily sipped her way through three glasses or more without even thinking about it. The whipped cream certainly did pack a punch, though, reminding Brandy that she wasn't merely drinking a lovely coffee, but enjoying a proper cocktail. Though she missed seeing the Dark Matter coffee infusions that the bar had previously been creating, she thought the Mexican Coffee almost made up for their absence.

To start off brunch, Brandy ordered the Truffle Fries, which came with a sprinkle of Parmesan, crisped bacon, chives, and a lemon aioli. The fries were a little dry on their own, but taking them for a dip in the creamy aioli certainly did help. The bold flavors of the bacon and the chives drowned out the truffle, sadly, but they did make the fries mighty tasty. "If it was me, I'd forget the truffle all together and just call these Bacon Fries," Brandy thought aloud. 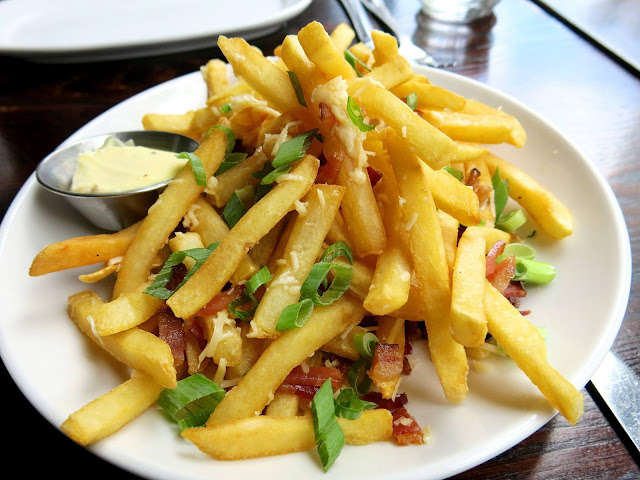 Next, she shifted to the sweeter side with some Lemon Ricotta Pancakes. This was a flavor profile she'd been seeing quite a lot as of late, and though lemon isn't typically Brandy's favorite thing in the world, she did like these particular pancakes. A healthy slathering of coconut cream helped to bring out the creaminess of the ricotta while balancing the acidity of the lemon nicely. The pancakes themselves had a great fluffy texture that didn't leave Brandy feeling weighed down by the end of the plate. 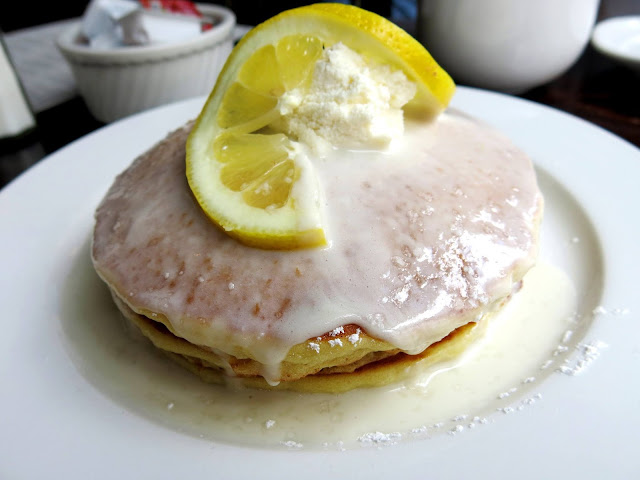 Lastly, Brandy ordered the Skillet Nachos, which seemed to be an interesting new version of of chilaquiles. Adding some medium rare steak to the concoction that included pico de gallo, black beans, sour cream, guacamole, and scrambled eggs really gave the dish a feeling of well-roundedness. Every bite was a little different, which Brandy loved, with plenty of crunch coming from the freshly fried tortilla chips. She used these interchangeably with her fork to scoop up all of the lovely toppings. "What a delightful change of pace," Brandy declared, "I've become a bit bored by seeing chilaquiles on every menu in town, but this has something different about it that makes it into a whole new experience." 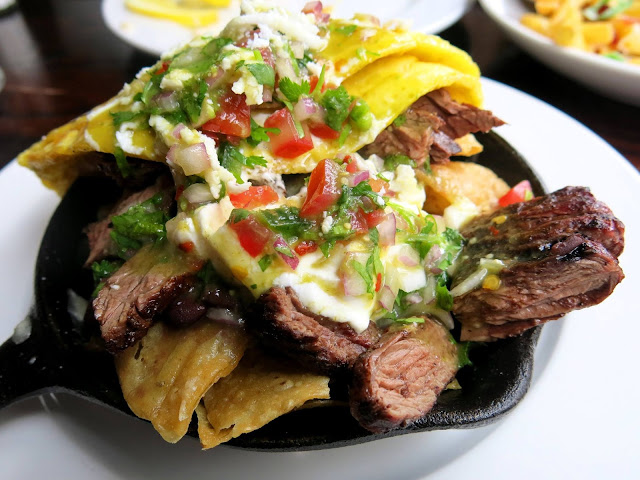 Satisfied to see a location so close to her heart finding their footing in a new realm, Brandy wandered out into the street. She then immediately wandered back into Revival Social Club, took a seat at the bar, and ordered more Mexican Coffee's until she had to be asked to leave so the staff could go home.

The writers of this blog were invited to dine at the restaurant free of charge in exchange for an honest review.
Posted by Bunny and Brandy at 11:37 AM