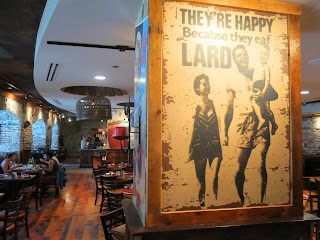 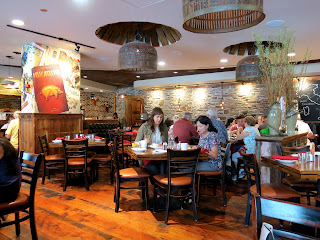 "I am strung tighter than a rubber band holding together a jet engine!" Brandy moaned to her friend Starr one day. "What could you possibly be so stressed out about?" Starr laughed, "All you do is go out to brunch! That's what most other people do to relax when they're stressed out." "But brunch is precisely what's got me in such a tizzy! There's a lot about brunch that is stressful," Brandy pouted, defiantly, "What if I over order and can't taste everything at it's freshest? What if I over balance the sweet to savory ratio? What if I opt in for bottomless mimosas and don't drink enough of them to cover the cost? There are just so many things to think about when you're regarded as one of the city's ultimate brunch experts!" "Alright, alright, chill. I think that your problem is that you've gotten too bogged down by your own criteria. Tell you what, let's go to brunch, but this time, maybe put all your rules and procedures aside. Just go as a civilian for once instead of a brunch expert. Maybe then you'll remember what brunch is supposed to be about."

Agreeing to try and let go of some of her tightly held brunch traditions, Brandy accompanied Starr to Davanti Enoteca in River North. They were pretty smitten straight away by the retro posters that adorned the walls of Davanati Enoteca, giving it the feel of a neighborhood joint that had been there since the beginning of time. The brick walls and distressed woods and metals also created a warm, friendly atmosphere, as did the open and spacious seating arrangement. 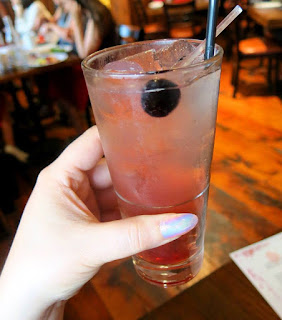 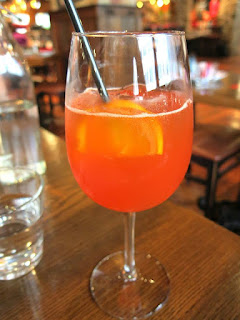 "First order of business, no mimosas or bloody mary's," said Starr, "You have to go outside of the norm." "But... but... just look at that make-your-own-bloody-mary bar!" Brandy whined. "You don't even like bloody mary's!" "Fine. How about... ooo, there's something called the Davanti Spritz that sounds interesting!" And indeed, the spritz was quite lovely, with a bright citrus flavor from some some blood orange juice, pleasantly fizzy from a splash of Prosecco and soda, and sweet from an Aperol finish. Starr eyed Brandy as she happily sipped her large glass of spritz. "That sounds suspiciously like a mimosa to me," she said. "I don't know what you mean, dear," Brandy replied, airily. Starr chose the Cider House Mule, a Moscow Mule given a little twist by the use of a cherry apple cider instead of ginger beer. She found the cocktail very fruity and effervescent, and while she detected the cider flavor right away, she couldn't taste much of anything else.

Round one of their brunch then began with a pair of items from the Insalata and Antipasti sections of the menu: some Crispy Brussels Sprouts and the Truffle Egg Toast. Though Brandy has had many a crispy brussels sprout for brunch before, she usually reserves that particular delicacy for autumn and winter. "We're breaking traditions today, remember?" Starr reminded her. The brussels had an intense flavor that bordered on being a little too salty, as they had been mixed with crunchy bits of fried prosciutto, but the addition of a sunny side up egg really helped to tame them. The toast was a unique surprise, with it's aromatic waft of truffle oil spreading across the table the moment it was set down, to the compact and unique appearance that was somewhere between eggs in a basket and a savory French toast. "It certainly is a nice change of pace from avocado toast," said Starr. Brandy liked it as well, especially its melty fontina coating and the little bits of asparagus that dotted the plate, providing a burst of color and a respite from the otherwise rich dish. 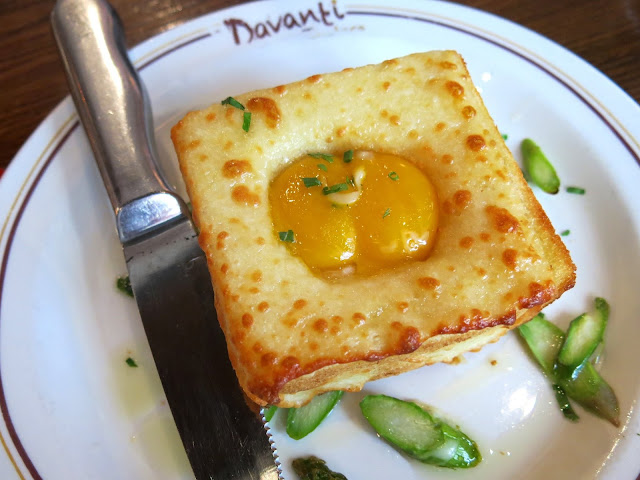 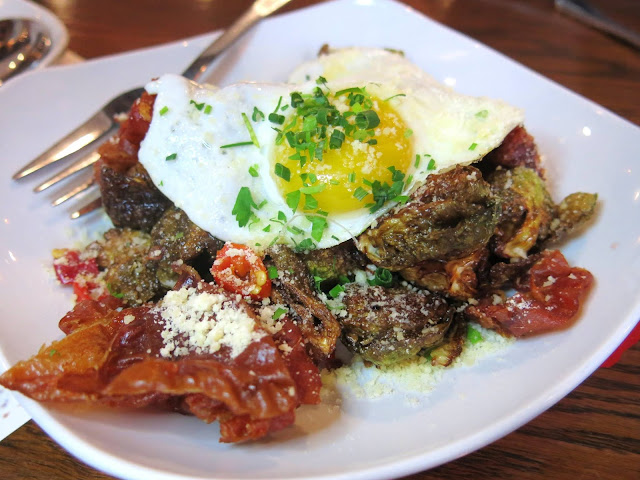 Next, they moved on to some pasta, specifically some Gnudi Pomodoro. The gnudi were incredibly light and airy, and matched well with the dollops of fresh buffalo mozzarella, shreds of basil, and a  slightly spicy sauce that really kept each bite from getting boring. 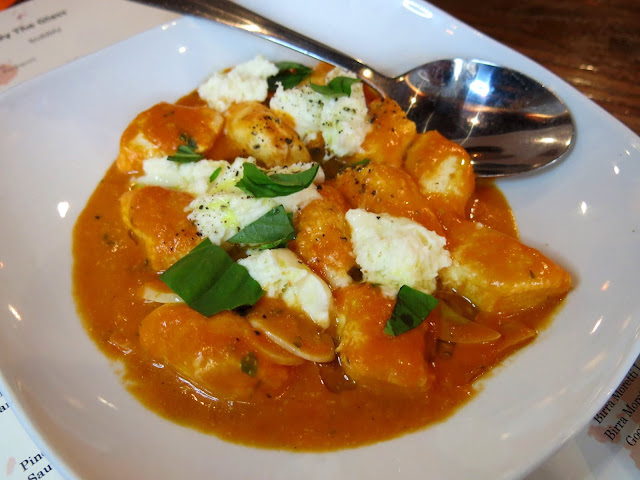 Starr picked the Prosciutto and Egg Sandwich as her entree, which came with a side of roasted tomatoes. She likened the massive sandwich to an Italian version of a croque monsieur, as the prosciutto had been placed between the two pieces of Tuscan toast, but the egg had been put on top, accompanied by a creamy sauce, making it more of a fork and knife affair. She found the amount of bread to be a little overwhelming, especially since she had expected more a hand held sandwich, but prosciutto was absolutely perfect. 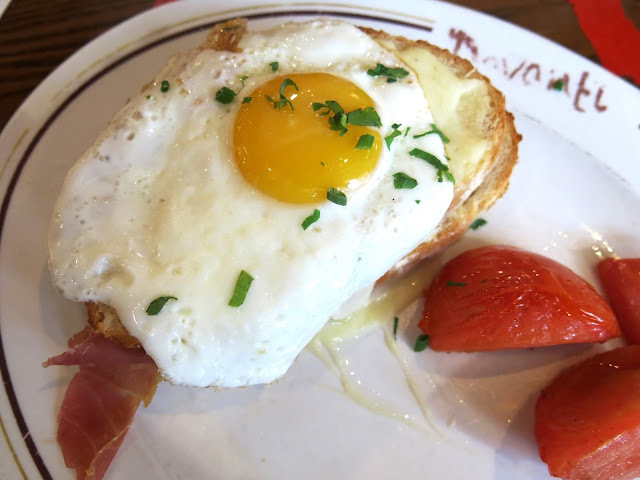 Brandy went for the Davanti Burger ("Don't you always order burgers for brunch?" Starr asked. "Perhaps, but this one doesn't have an egg on it. That puts it firmly in the brunch category," Brandy retorted), which came topped with bacon jam, roasted tomatoes, broiled cheese curds, roasted garlic aioli, and fresh arugula. One thing that Brandy particularly liked was that instead of the expected side of fries, she was able to get a mini version of the signature escarole salad as her side. Normally, a side salad wouldn't be worth noting in her book, but this one came dressed with green apples, hazelnuts, a pecorino dotted with black pepper, and celery, and therefore was pleasantly unexpected. As for the burger, the thing was cooked to perfection, with a very juicy patty that had a good salt crust to it, some melty, chewy cheese, and a decent amount of sweetness from the tomato. The true accomplishment of the burger was that the bacon jam didn't overwhelm everything else, which it so often is wont to do. 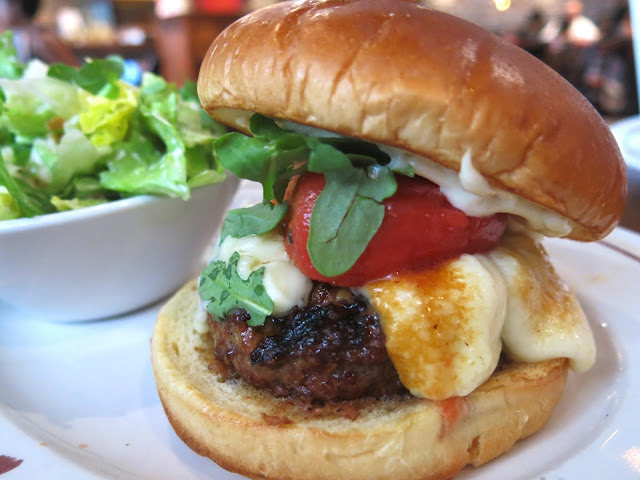 The brunch menu at Davanti Enoteca was certainly a nice change of pace for Brandy. Very few of the dishes could be pegged as being simplistic brunch staples, as everything had a bit of a creative twist to it, and the preparation of everything was beyond expectations. Though the service moved a little slowly, the servers were all very friendly and had excellent suggestions when it came to the menu. "I'm very proud of you, going out of your comfort zone a little," Starr said to Brandy as they finished off the last of their cocktails. "I'm rather impressed with myself, if I'm honest," said Brandy, "Do you realize we have had nothing sweet at all during this brunch? I can't even believe that I'm not missing the other half of my sacred brunch ratio at all!" Then, after mulling this fact over for a minute, Brandy and Starr decided to head to the Glazed and Infused next door to pick up a donut or two.

The writers of this blog were invited to dine free of charge at the restaurant in exchange for an honest review. 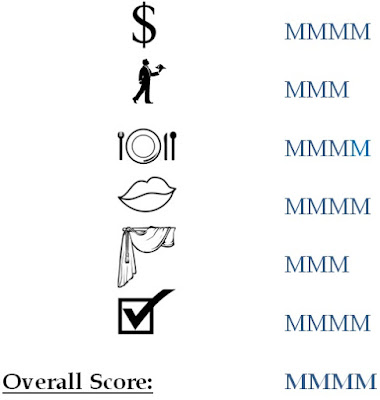 Posted by Bunny and Brandy at 1:28 PM