Roanoke or There's Tea Infused Bourbon in the Jar 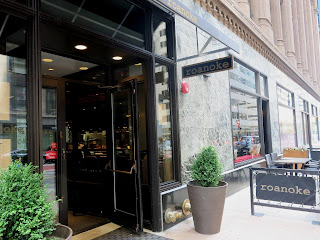 Brandy's friend Hawk had been going stir crazy. More often than not, he exemplifies what a strong and independent man should be, but with his wife, Bailey, traveling in the Southwest for a week, he slowly was becoming more and more lost without her. "My schedule is all thrown off. So is the cat's," he complained to Brandy, "and I don't seem to know where anything is any more. I've been eating over the sink because there doesn't seem to be any clean plates anywhere." "You poor thing," Brandy chuckled, "Let me take you out for a nice brunch so you can at least eat off a plate like a civilized human. Bailey will murder me if she comes back to find you've reverted to a caveman."

Brandy decided to take Hawk to Roanoke, a fairly new meat focused restaurant in the heart of The Loop. They were greeted by fiery torches and pillars just outside the door, peeking Hawk's more primal senses. The inside was warm with a definite masculine feel from the charcoal color scheme, which had been accented with gold, copper, and bronze. 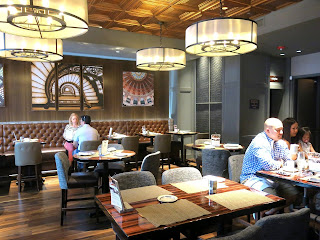 Both Brandy and Hawk were immediately drawn to the cocktail menu. Hawk went for an interesting sounding concoction called the Holabird & Roche, which consisted of scotch, lemon, hazelnut syrup, cinnamon, and surprisingly, a banana liqueur. Hawk raised a single eyebrow as he took his first sip, indicating he was intrigued by the mix of flavors. "It's almost smokey," he reported, "and tastes like something I would like to be sipping in front of a fire in winter time. Very interesting." Brandy went with the Toast and Jam, which was rye mixed with hibiscus syrup, lime, and grapefruit. Brandy found the little punch to be bright and very flavorful, with a decent amount of zing, but a smooth finish. As Hawk and Brandy sipped their cocktails, they took notice of an extraordinary contraption on the bar. "What is that thing? It looks like something out of a mad scientist's laboratory," Brandy asked their server, who explained that it was a sophisticated apparatus used to infuse various liquors with the restaurant's choice of flavors. At that moment, they were using it to infuse bourbon with tea, cherry, and citrus peels. And even though Brandy already had a cocktail gripped rather tightly in her hand, she knew she had to try this wondrous product, so she ordered the Landmark Old Fashioned. The infused bourbon cocktail was extremely complex and smooth, with a nice little citrus finish that she rather enjoyed. "And how much does one of those thing-a-majigs cost? I think I need one for my own kitchen," she asked the server. 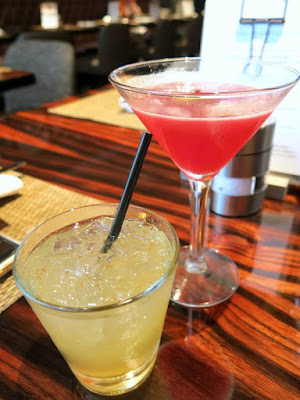 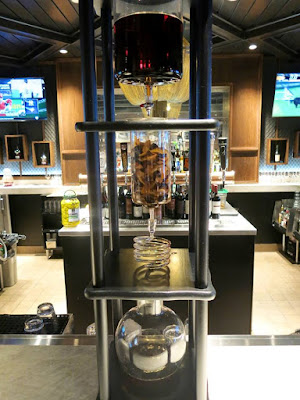 After sufficient beverages had been obtained, Brandy and Hawk moved on to some sweet and savory appetizers. First up was the sweets; house made cinnamon rolls, served affogato style with vanilla ice cream and a pour over of dark roasted espresso. The cinnamon rolls were no light and fluffy affair, as they had a denser texture and plenty of gooey icing. The coffee actually helped to tame some of the sweetness in them, but the ice cream made them feel more like a dessert than a breakfast item. Still, Brandy had to give them credit for their creative presentation. 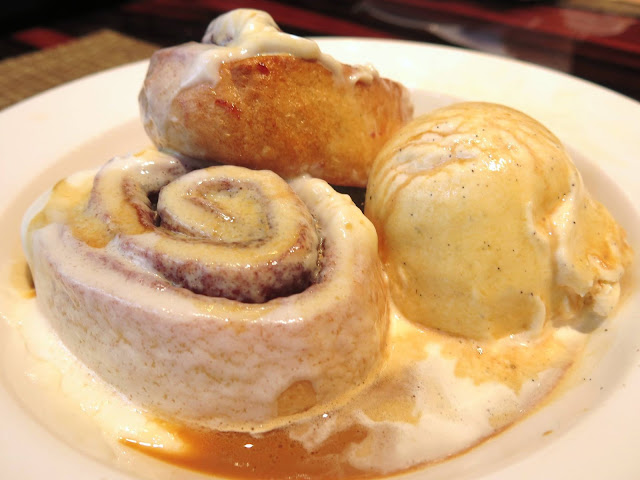 For the savory side of things, they ordered the Rotisserie Roasted Cauliflower Salad as well as the Southern Fried Chicken. Brandy adored the vibrant colors of the salad, from the purple cauliflower to the greenery and pops of red from the grapes. It had an excellent balance of textures between the roasted veggies, the Marcona almonds, and the creamy goat cheese, and Brandy adored the bursts of sweetness from the addition of the grapes. Hawk, in the meantime, dug into the chicken, which he described as having the perfect kind of crunch and a very flavorful coating. The meat itself was a tad dry, but house made pickle slices and a spiced honey helped to pick everything back up. 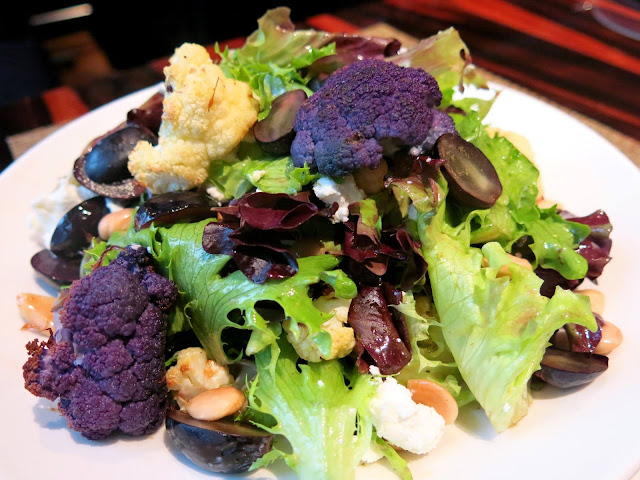 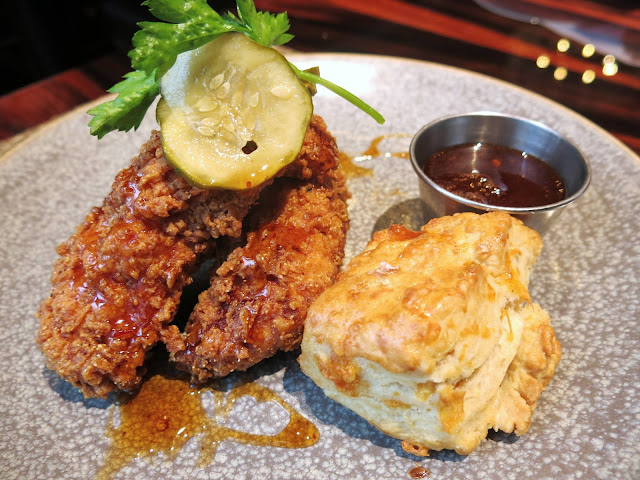 For his entree, Hawk went with the classic Griddled Hamburger Sandwich (going off the recommendation of the chef himself, who told Hawk that he makes himself one every day when he comes into work). The burger didn't come adorned with any fancy bells and whistles; just tomato, lettuce, American cheese, pickles, dijonaise, some caramelized shallots, and a side of fries. Hawk actually loved the simplicity of it, commenting, "It's a classic burger, made the way they used to be before they got over copied and over produced." The meat was cooked to a perfect medium rare and even though the challa bun was soft and supple, it provided plenty of structure for the insides of the sandwich. 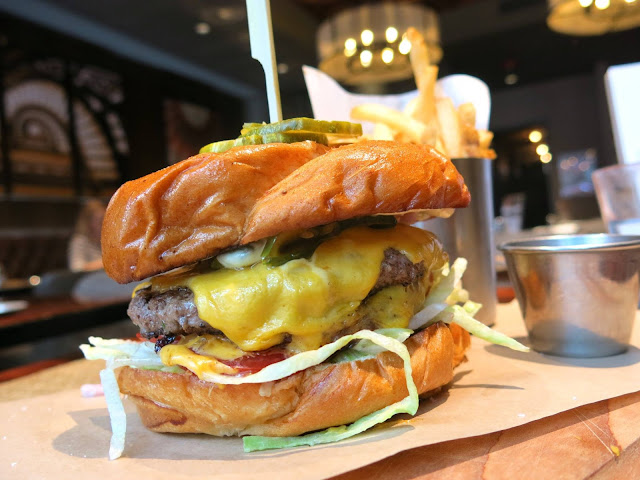 Brandy picked the Porchetta Eggs Benedict, especially wanting to sample the signature rotisserie roasted pork. She thought the succulent meat made a nice change from the usual pork belly or ham she sees on other benedicts, and she especially liked the rich flavor of the hollandaise. What really set this particular eggs benedict apart was actually the addition of some oven dried tomato, which gave each bite a bright sweetness to it. "Just like your burger, I feel this is a fairly classic dish, but done so well that it feels new again," said Brandy. 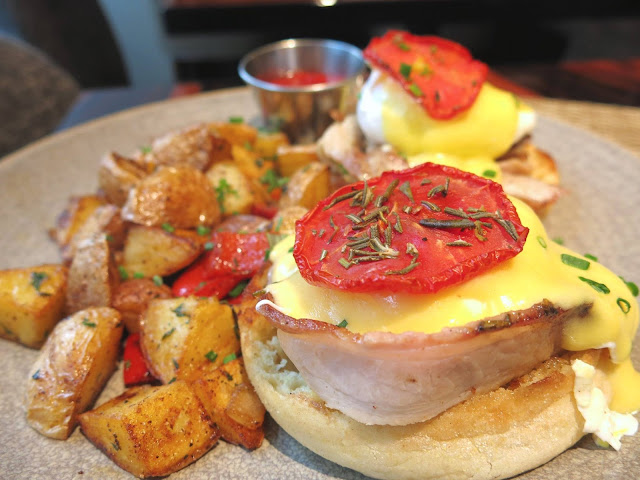 Finally. they ended as they began; with some sweetness from the Brown Butter French Toast. Slices of Texas Toast had been coated in a hazelnut crust and came served with warm blueberry maple syrup, dollops of luscious lemon curd, and fresh berries. The eggy inside of the toast was so soft that it was almost hard to get a forkful of it, but the bits of toasted hazelnuts added a nice textural contrast, while the lemon curd perked everything up. "You know what this reminds me of?" Hawk smiled, "Peanut butter and jelly sandwiches!" And funnily enough, Brandy could see what he meant. Brandy and Hawk were quite pleased with their carnivorous brunch. The portion sizes were more than generous, the plating was well thought out, the service was friendly, prompt, and informative, and the offerings were unique enough to be interesting, but familiar enough to be comforting. "There now, do you think you remember how to be a functioning human being again?" Brandy asked Hawk. "I remember how, yes," he responded, "But now that I'm so full of food, I don't think I'll be able to physically function until after a long nap." 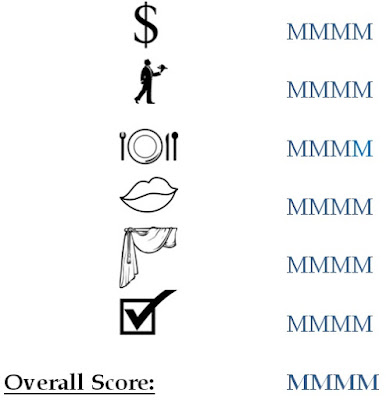 Posted by Bunny and Brandy at 1:07 PM