I was sent products free of charge by Pirro's Sauces in exchange for an honest review of their line. All opinions are my own. 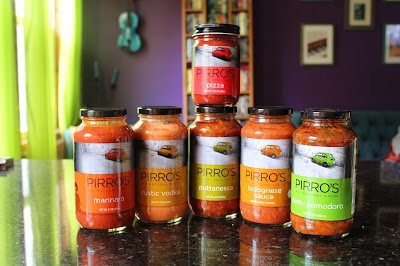 My life was forever changed when I received a pasta roller as a Christmas present last year. Since then, I have been obsessed with perfecting my own fresh made pasta recipe. I started very basic, trying different combinations of flour, eggs, oil, and water, and I quickly discovered just how many variables there are in pasta making. Do I use whole eggs, or just the yolks? Do I salt the dough, salt the water, or both? Does adding oil to the dough actually make a difference? Should I rest the dough, or work with it straight away?

After much experimentation and research (ie, late night Googling), I arrived at a method I felt comfortable with, but I couldn't quite get the texture I wanted. I started trying different flours; semolina, whole wheat, tapioca, and on and on. Finally, the answers I was seeking came in the form of bread flour, which is essentially all purpose flour with more protein. This added protein promotes the formation of gluten, which in noodle making terms, gives a chewier, stronger product than just using the regular old white stuff. Once I discovered bread flour, I was making fresh pasta pretty much every week. 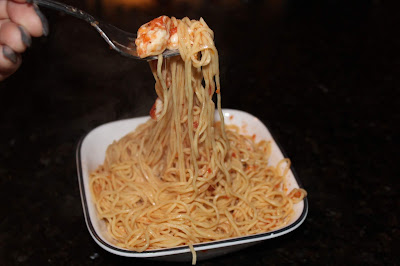 With my new found ability to produce copious amounts of carbs tucked neatly into my culinary tool belt, I was thrilled when Pirro's Sauces reached out to me to see if I'd like to sample their line of all natural, authentically Italian products. Pirro's Sauces are based on the recipes of owner Brianna Pirro's grandmother, handed down through her father, who founded Pirro's Restaurante in Woodstock, IL. The sauces were so popular at the restaurant that customers used to request jars of them to take home, so the move to professionally bottle and sell them was a natural progression. Though the restaurant may have closed in 2012, the Pirro legacy lives on through their lineup of delicious, high quality sauces; Marinara, Pesto Pomodoro, Bolgnese, Puttanesca, Rustic Vodka, and Pizza Sauce.

When I first got my hands on the sauces, I decided the simplest way to get an idea of their flavors and quality was to first try out the classic Marinara with some hand made noodles and fresh mozzarella (this has literally been my go-to meal for half my life. I literally eat it once a week). I was really impressed to see that there wasn't a single chemical, preservative, or artificial thing listed in the ingredients; just veggies, olive oil, and spices. The sauce itself had a bit of a chunkier texture to it with a thinner base than what I usually see from a jarred pasta sauce. This was actually perfect for tossing with the fresh pasta, as the noodles absorbed much of the flavorful liquid, and the finely chopped ingredients were able to disperse evenly throughout. The flavor was so wonderful; no metallic or overly acidic notes, but lots of sweet tomato goodness with a little bit of a crunch from the celery and carrots and an aromatic hit of garlic and basil. 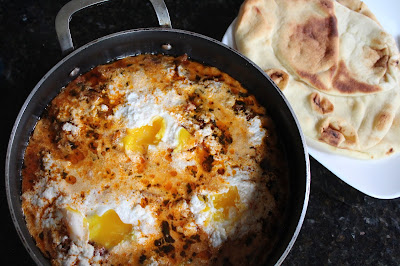 Now that I was certain Pirro's knew what they were doing, I took their Pesto Pomodoro and made a quick and easy take on a Shakshuka with it. Basically, I just poured the whole jar into a non stick skillet, heated it up to a simmer, cracked a few eggs into it, sprinkled in some goat cheese crumbles, and let the whole thing cook over medium low for about 5 minutes. Lastly, I toasted up some naan bread, then sat down and started scooping into my concoction. Because the pomodoro has a good bit of Parmesan cheese in it, the flavor of this sauce was a little richer and the texture a little more hearty. I think it's a testament to how good this sauce is that I was able to really enjoy it basically straight out of the jar with very little alteration. 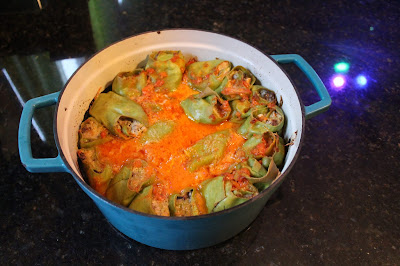 Finally, the sauces having proven their worth to me, I dived into something I had not yet attempted; a stuffed pasta dish. Deciding to use the Rustic Vodka sauce to make my pièces de résistance, I whipped up a batch of spinach pasta dough (recipe below), rolled it into thin sheets, and stuffed it with a simple mix of ricotta, mozzarella, Parmesan, and a few spices. I lined a few of my little makeshift manicotti into the bottom of an enamel lined Dutch oven, covered the tops of them with some of the creamy tomato sauce, then added the next layer of pasta, then sauce, and continued layering until all the pasta and sauce was in the pot. I put the whole thing in the oven for about an hour at 400 degrees, took it out, and dived in. The Rustic Vodka may have been my favorite sauce of them all because it was just so rich and buttery. I don't know if I've ever had a better version from a jar (or in a restaurant, for that matter).

So that settles it for me: Pirro's might now be my official favorite jarred pasta sauce brand ever. Not only are they delicious, I love that their story started right here in Illinois and that they are female owned. This is exactly the kind of company I want to clear room on my shelves for. In blender or food processor (I use a bullet blender), add the spinach, eggs, and salt, then blend until the mixture is smooth and a vibrant green.

On a counter top or large cutting board, mound the flour and make a large, wide hole in the center of the mound (I use the base of a measuring cup) so that it resembles a volcano. Slowly pour about half of the egg and spinach mixture into the middle, making not to let the liquid leak outside the flour mound. Using a fork, slowly begin whisking flour into the liquid until it forms a paste. Keep adding more liquid until a solid dough can be formed (a bench scrapper is great for this stage when the dough is prone to stick to hands). You may not need all of the liquid, but you also may need to add flour if the dough is becoming too sticky to kneed. Once you have a smooth, non sticky ball of dough, wrap it in a dry kitchen towel and let it sit for at least 15 minutes before putting it through a pasta roller. If the dough sticks at all to the roller, add more flour, kneed, and rest again.

This dough will keep for a while in the fridge, but be aware that the longer it sits, the more the color will darker. Alternatively, you can freeze the dough for later use.