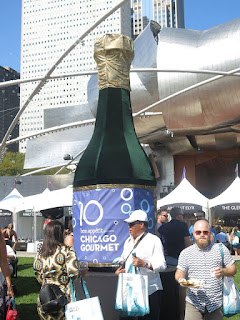 There is a reason that Brandy so eagerly anticipates the end of September every year, and it might not be what you think it is. "Most people count down the days until the beginning of fall so they can get their hands on a pumpkin spice latte," she muses, "But for me, it's all about the countdown to what I refer to as 'Foodie Christmas.'" Yes, the biggest food festival of the year has once again come and gone, and although this year's attendees had to deal with record heat, there was no putting a damper on the party. Chicago Gourmet was celebrating a decade of existence and did so with a bang, adding all sorts of new events leading up to the big weekend while theming everything on the idea of decadence (or Decade-ance... get it?).

Having attended seven out of the ten festivals, Brandy has developed a pretty good strategy for getting through the day in the most efficient way possible, which she would like to share with all of her readers so that they can more easily prepare for future festivals.

Rule Number One: Hit the ground running. Brandy always makes sure she hasn't eaten anything for at least twelve hours before the festival so that she can be sure she has enough room for all the deliciousness. Once in the gate, she immediately made a beeline for the Four Corners Tavern tent, which was serving a selection of dishes, desserts, and cocktails from their collection of restaurants (with an emphasis on their newest venture, Brickhouse Tavern, which recently opened just outside of Wrigley Field). This tent is always ready to go right as the festival opens, while others are still in prep mode. Brandy was able to quickly grab up some savory fry bread, a buffalo tuna cone, some boozy rainbow jello push pops, an adorable unicorn donut hole, and a Moscow Mule, all while others were still consulting their maps. 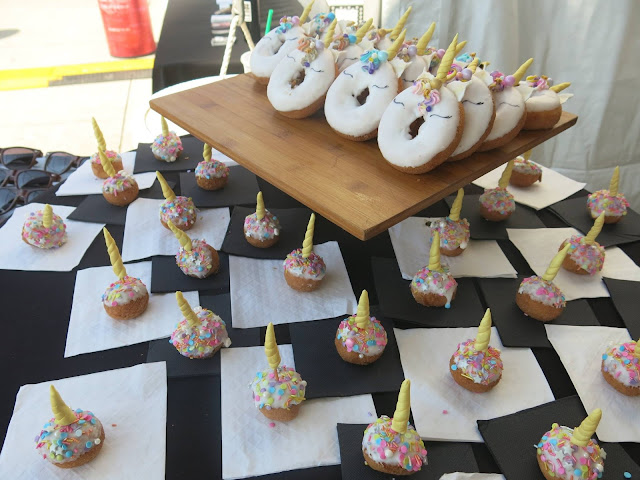 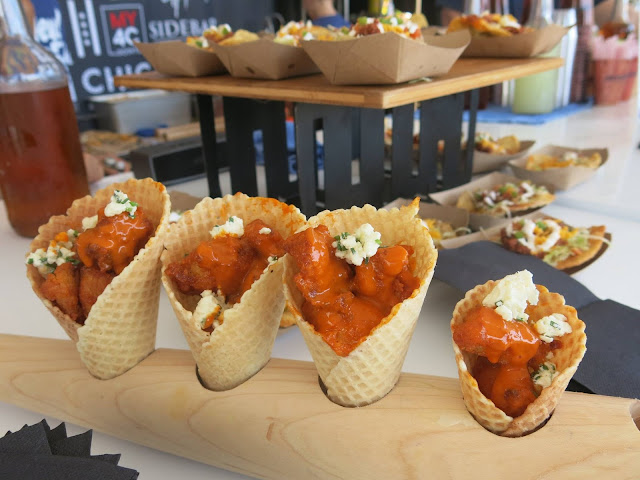 Rule Number Two: Eat on the go. Once she had a handful of goodies, it was time to find another tent to line up for. Veterans of the festival will often go straight for the Supreme Lobster tent, as it tends to accumulate the longest lines, but Brandy prefers to make her way around the perimeter of the festival first, as those tents tend to run low of food more quickly. Brandy headed for the Mariano's tasting pavilion, and just as she finished up her previous haul, she was ready to collect delicious items for her next round. The K-Pop Fun Time Wieners with "kim-cheeeeze" whiz from the Duck Inn were a definite favorite from this group. 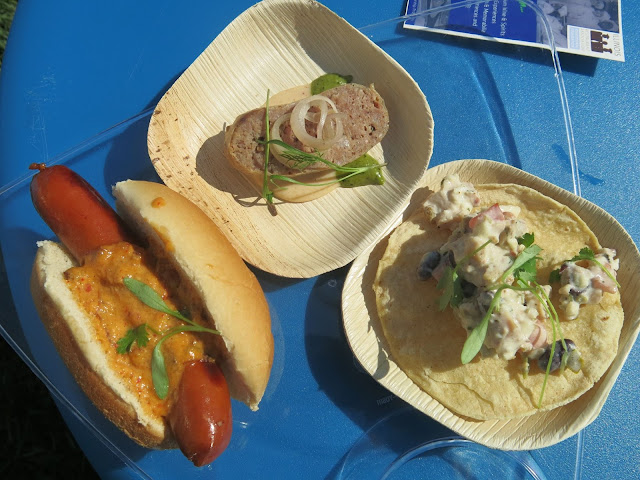 Rule Number Three: Know who your friends are. The beginning of the day is the most important part, because it sets the pace for everything else. If one fills up too quickly, they'll be sluggish for the rest of the day, but if one goes too slowly, they risk being too full by the time the second session comes around. Brandy likes to review the locations of restaurants she knows she loves and plan her stops accordingly so as to waste as little time as possible. Honey Butter Fried Chicken is always going to be a great option, so she headed in the direction of their tent and got the bonus of a delicious hot dog from Bar Lupo, topped with bolognese, giardiniera, and ricotta, as well as a braised short rib slider with tomato jam and truffle aioli from Pearl Brasserie. 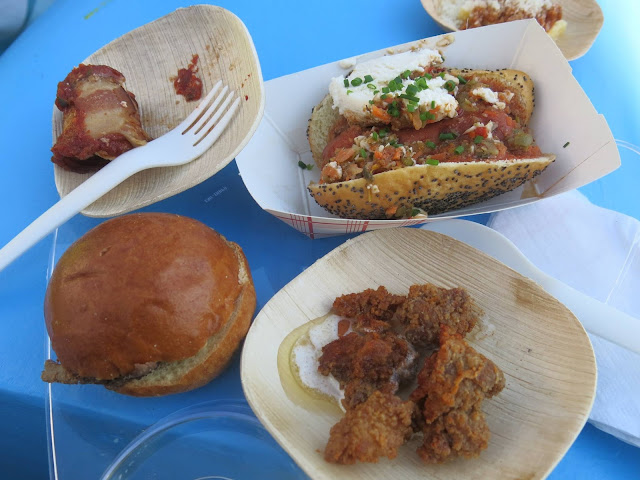 Rule Number Four: If you don't love it, don't finish it. Pacing is key, especially when some of the restaurants seem to be trying to out do each other with portion sizes. Brandy spotted Marchesa serving a mini bowl of steamed mussels, which on first glance seemed like a lot of food, but was actually a manageable size once one had removed all the meat from the shells. She greatly admired the bravery of serving mussels at an event such as this one, where the temptation is to present a perfect one bite dish. 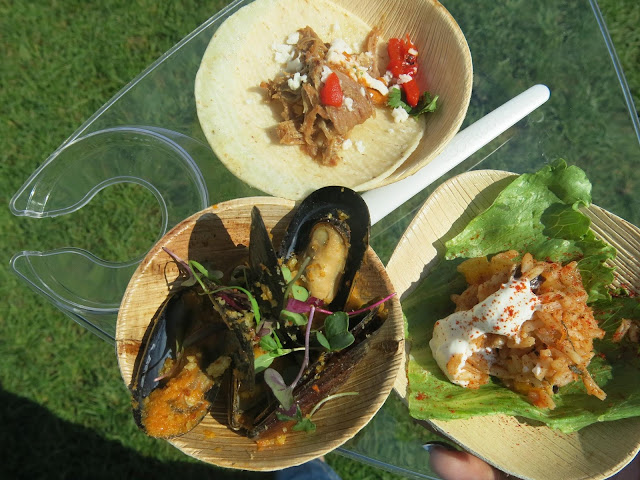 Rule Number Five: Take breaks and stay hydrated. There are plenty of oases to be found outside of the more obvious seating areas. 8 Hospitality offered some bar tables and chairs along with cocktails and a truffle and pheasant pie. Counter Culture Coffee had created a pop up cafe, where they were offering everything from cups of cold brew to shots of espresso to give attendees a much needed boost of energy. Thermador had set up a comfy lounge area, offering people pieces of bacon dipped in either chocolate or caramel as a quick snack. Patron had the most impressive spot, right in the middle of the festival, where bartenders were slinging a variety of tequila cocktails. 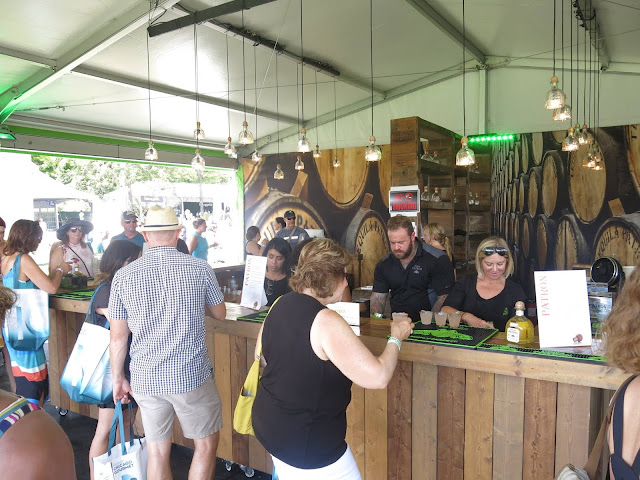 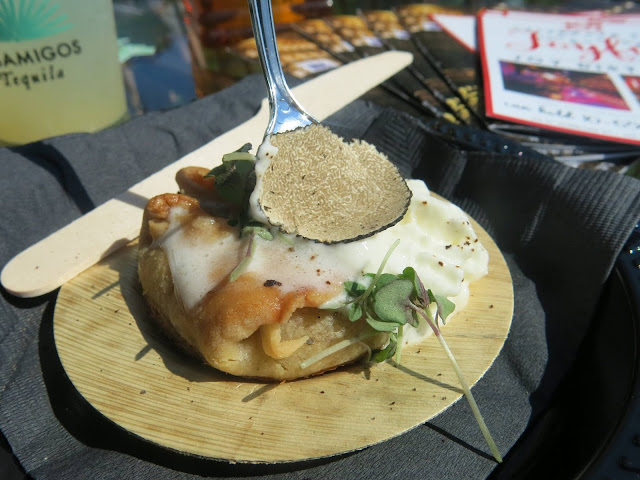 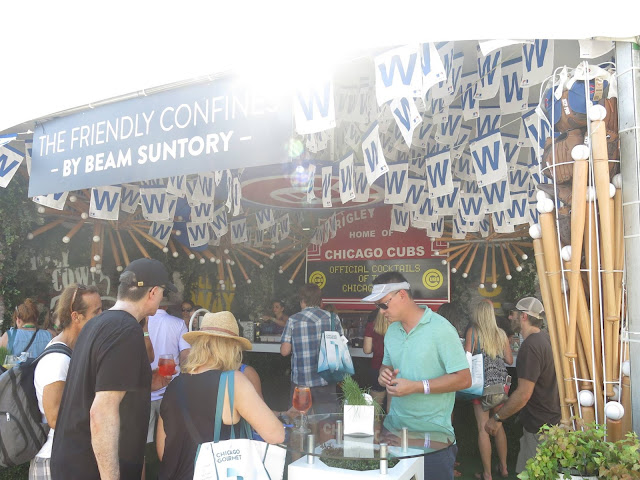 Rule Number Six: Wait to get sweets until you're almost full. With most of the dishes at Chicago Gourmet being savory, a sweet treat can make quite a difference to one's overwhelmed palate. After sampling a slightly sweet braised beef brisket with sweet potato puree, pickled slaw, and apple jam from Promontory, Brandy found herself craving things with even more sweetness, so she headed to the desserts pavilion. There she found Bittersweet Pastry shop serving up butterscotch brownies, Bang Bang Pie handing out cups of fresh blueberry crisp, and Beacon Tavern presenting a beautiful hazelnut and chocolate layered cake. 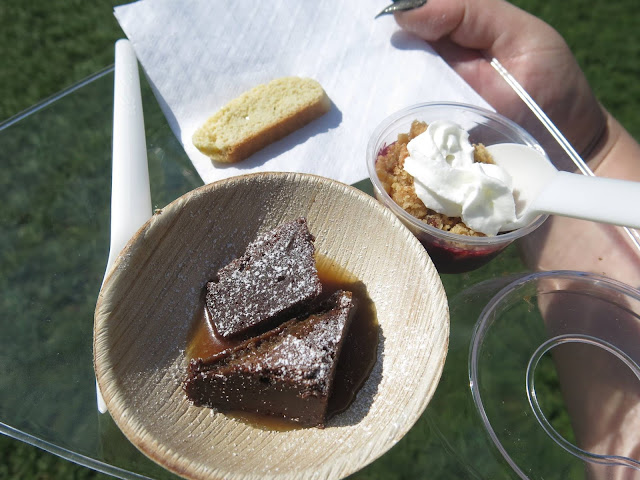 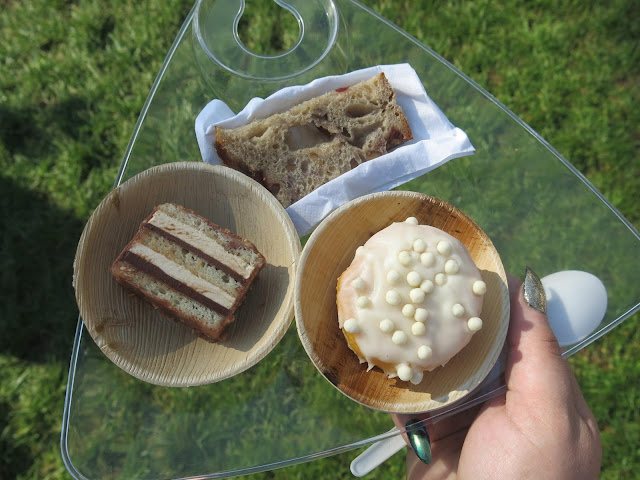 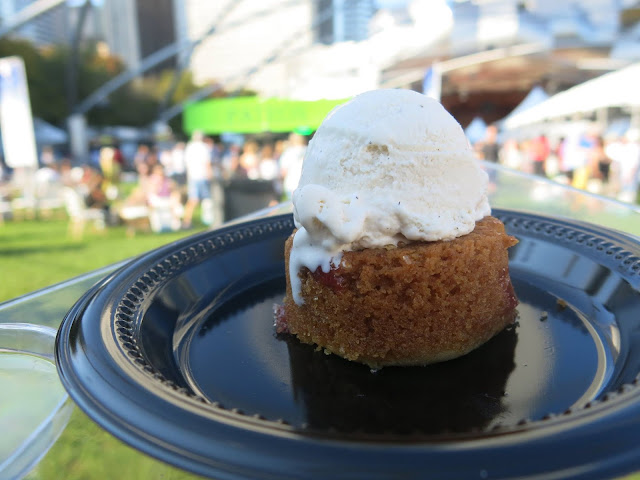 Rule Number Seven: Hit the demos before you hit the wall. As Brandy does most years, she headed to the main stage demos while the tents transitioned from the first to the second sessions. Comfortably seated, she watched as Stephanie Izard and Sarah Grueneberg teamed up to make dumplings and pasta (with some assistance from Billy Dec), followed by Art Smith and Lorena Garcia exuding their sass and charm with some Southern/Latin fusion food. 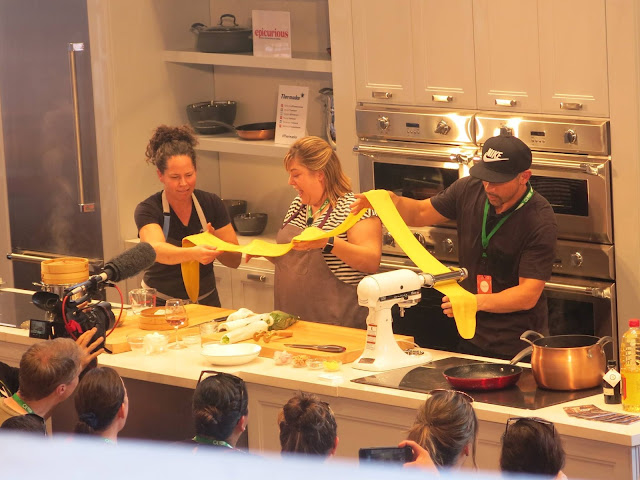 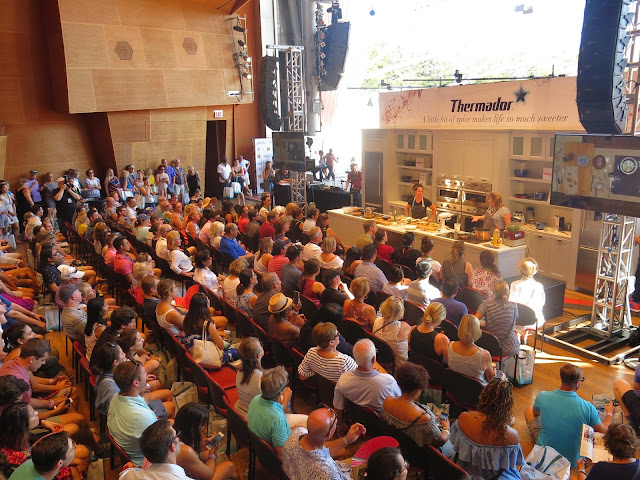 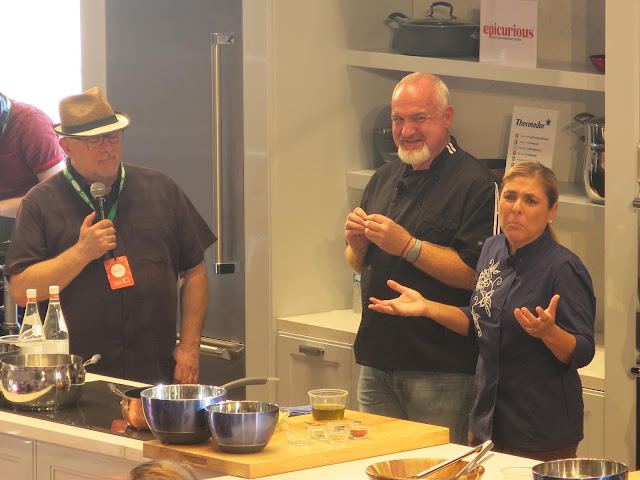 Rule Number Eight: Find the most creative and refreshing dishes to finish out the day with. The second session can be the most challenging part of the day as fatigue sets in and the alcohol starts to seep into the blood stream, but finding new and exciting things can help keep the mind sharp. Brandy really loved her visit to the vegetarian themed tent, where Filini was serving up a gnocci with butternut squash and brown sage butter and Baptiste and Bottle offered a delicata squash with escarole, apple mostarda, and a chili seed romesco. Across the lawn, there was a fried sweetbread from Osteria Langhe, something one wouldn't normally expect to see at such an event, but a welcome surprise. Stings (Brandy's newly discovered go to for ramen) presented a wonderfully refreshing cucumber salad, which was a blessing of a palate cleanser after a day of snacking of such rich fair. 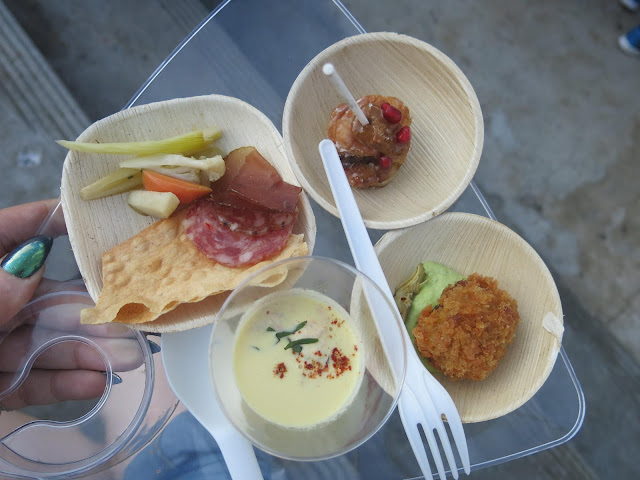 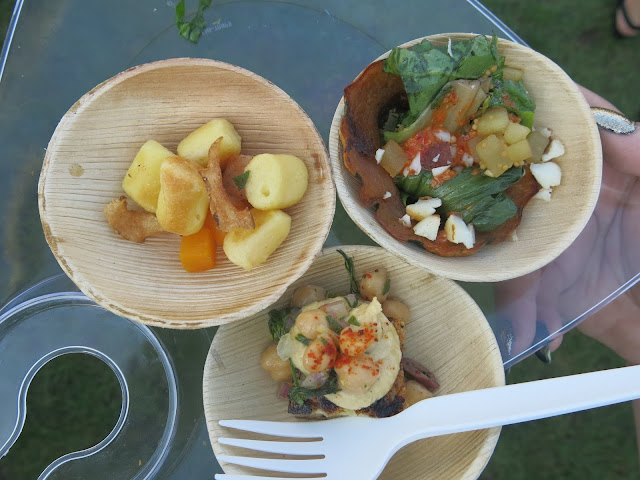 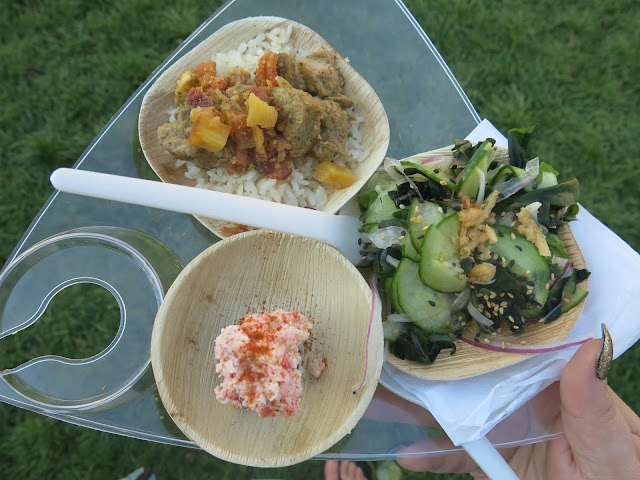 It certainly was a celebration of decadence at this year's Chicago Gourmet, but with her game plan at the ready, Brandy once again survived a long but exuberant day of food and drink. "It's a good thing they only do this once a year," she sighed as she headed out of the park, "I don't know if I could survive doing this even six months apart."

Don't forget, lots more pictures from the festival are available for browsing on our Facebook page!

The writers of this blog were given free admission to this event in order to facilitate the writing of this post.
Posted by Bunny and Brandy at 8:49 AM